“Being acknowledged for breaking rules in a positive light is so important to me because my entire career I’ve been very outspoken,” the out bisexual said in her speech. “I can’t help it. … I just have to speak up. It hits me in the gut.”

At only 22, Kehlani has become a trailblazer both inside her genre and in greater pop music, and with her new music video, “Honey,” she’s continuing that work by hiring not only a female love interest for the storyline, but an androgynous woman, played by Aarianna Johnson.

“There were particular reasons why I chose AJ for this video,” Kehlani wrote on an Instagram post. “This song was inspired by an androgynous woman, and I wanted to find someone who fell in line with that, who was ‘hard’ yet so so soft (yes, like a bee). I was asked ‘why not use a feminine girl? ,’ but I knew I wanted to honor the inspiration, and paint the picture of the sweet tender aspect that shines through every woman, no matter what.” 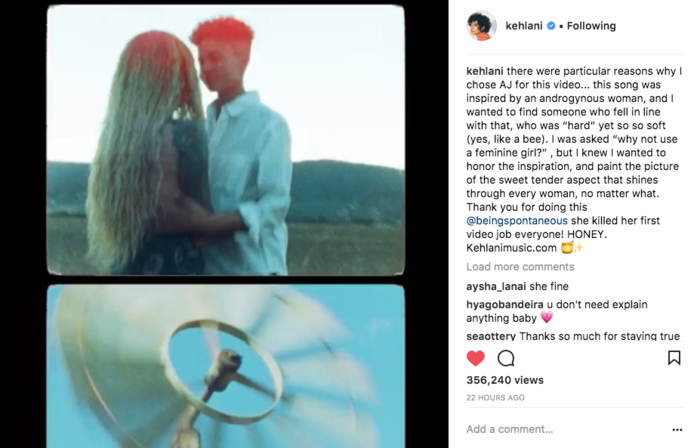 The video is a gorgeous portrait of romance between two women, set to the sweet stripped-down track from her forthcoming album, K*, a follow-up to 2017’s SweetSexySavage.

Kehlani and AJ nuzzle heads, hold hands, dance close, and kiss amongst the beehives and cloudy skies of an American farmland. It’s a true celebration of the feelings two women can share for one another, expressed without concern or sensationalism which is too often the case when it comes to depictions of queer sexuality on screen.

More frequently than not, these depictions are also of two feminine-presenting women, so Kehlani’s being pressed on why she didn’t choose a more femme counterpart for her video is not so atypical. It’s especially rare that we see a masculine-of-center woman of color, with few depictions popping up in popular culture over the last few years (including Lena Waithe’s Denise on Master of None and Poussey on Orange is the New Black.)

As Kehlani shared in her post, the song is inspired by who we can only assume is her current girlfriend, artist Shaina Negron. Negron recently accompanied Kehlani to the Soul Train Awards, where the latter was up for Best R/Soul Female Artist. She was the only out artist to be nominated in any category. 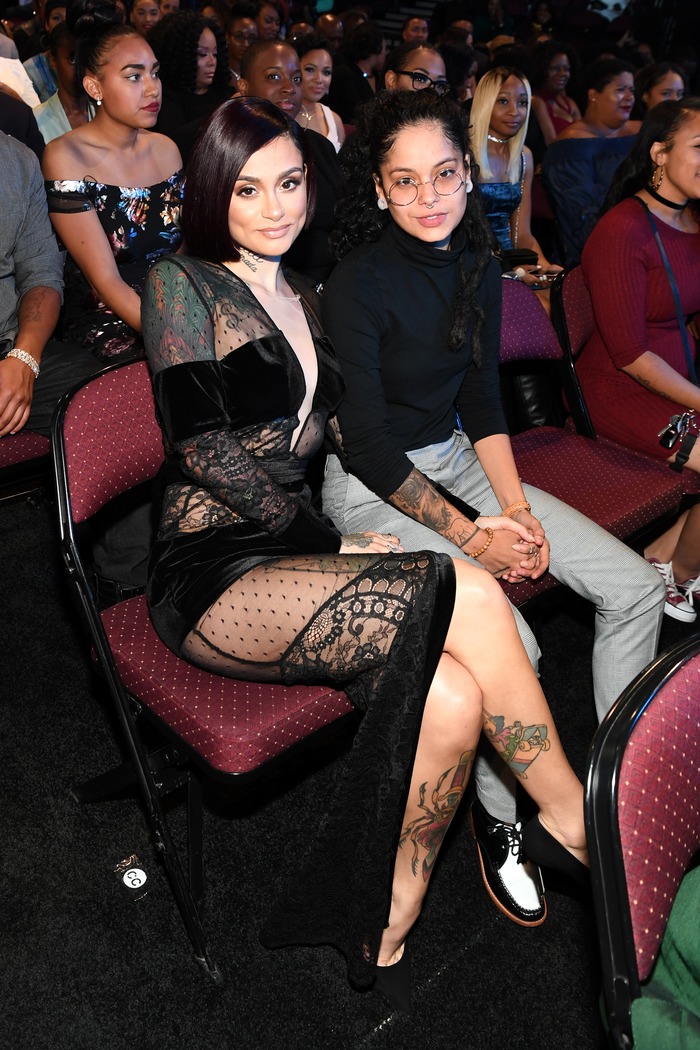 While other queer stars like Sam Smith, Halsey, Lauren Jaruegui, and Hayley Kiyoko are helping to bring some much-needed visibility to popular music and media, Kehlani is also helping to break stereotypes within R, which hasn’t quite achieved the same level of queer-friendliness that pop has. Alongside the only other out artists to achieve mainstream success in the genre, Syd and Frank Ocean, her being so fiercely self-accepting and advocating is an inspiration, and hopefully will allow for further “rule breaking” in the near future.

Kehlani’s singing about a relationship with a woman, and making sure the representation of that woman is not only accurate for her, but also helps women like the one she’s singing to feel seen should not be understated. As all music is expected to be universal, performing the kinds of feelings and emotions that people of all identities have and relate to, it’s important to note that Kehlani is singing a shared experience, no matter the gender. But it’s just as important to note that she’s subverting what’s “normal” or “expected” from young artists like her.

“All the pretty girls in the world,” Kehlani sings on “Honey.” “But I’m in this space with you. Colored out the lineI came to find, my fire was fate with you. Heartache would stay with you. Fly great escapes with you.”

She ends with an outro asking, “Is it love all we need? Is it love?” The answer provided in “Honey”:Yes.