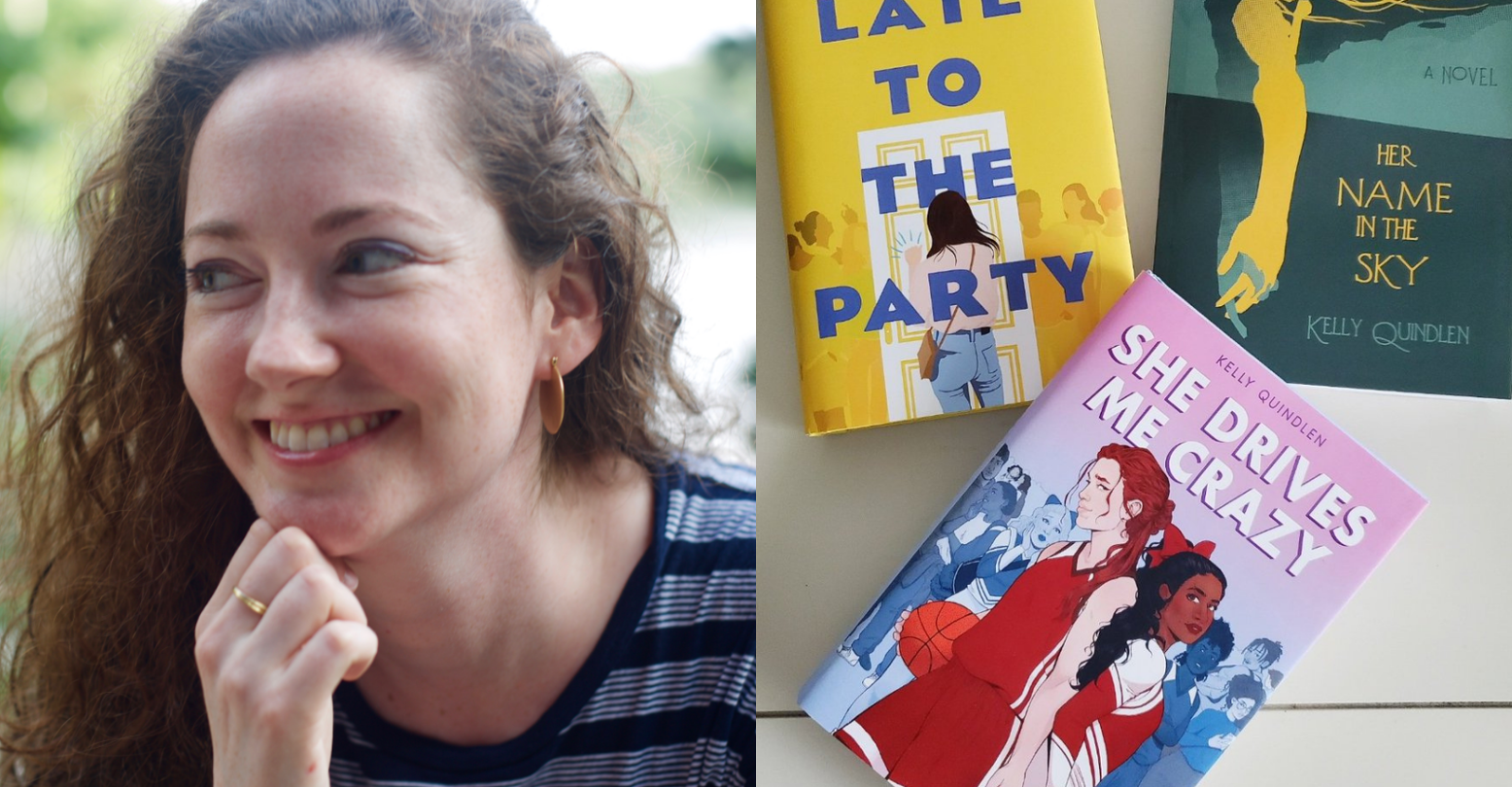 In 2014, novelist Kelly Quindlen self-published her first book, “Her Name in the Sky,” a love story about two best friends in Baton Rouge, Louisiana, whose budding romance contradicts their Catholic school’s moral code.

“It’s about coming out, reconciling with your faith community, and falling in love with your best friend,” Quindlen told INTO. “It has a happy ending, but there are some really traumatic parts, so I often get people tweeting at me like, ‘Hey, pay for my therapy.’ But I intentionally gave it a happy ending.”

The next thing she knew, the book was taking off—and it was happening almost completely through word of mouth.

Quindlen describes her first book’s success as being like the tortoise and the hare. “Her Name in the Sky” has, very slowly but very consistently, sold well over the past seven years. “I don’t think there’s been a day where it hasn’t sold,” she says.

Today, Quindlen is enjoying the success of a new book, “She Drives Me Crazy,” a romance that the author describes as “an homage to the great teen movies of the 80s, 90s, and 2000s, but make it gay.”

It should come as no surprise that readers are already lapping it up. And the same fan base that loved “Her Name in the Sky” is already posting memes, playlists, and fan art to Quindlen’s Twitter.

We enjoyed your book so much we made a playlist for it on Spotify – https://t.co/oymaQfiOM4

It’s the devotion of Quindlen’s fan base that got “She Drives Me Crazy” on the Indiebound Best-Seller list last week.

I’m speechless.
This happened because of the power of word-of-mouth marketing in the queer community. Thank you for the tweets, Booktoks, IG stories, blog entries, memes, and other manifestations of queer joy.
The result: 2 girls blatantly holding hands on a bestseller list 💗👭 https://t.co/kWP3OD74z6

It’s not unusual for fans to go wild over a book that speaks to them. But for Quindlen, the relationship with fans is an extremely intimate one. The campaign to make Quindlen’s first book into a movie directed by Olivia Wilde has its own Twitter account, full of fans posting memes, TikToks, and pleas to actors to make their dream of a film adaptation into a reality.

“In the queer community, you’re going to watch a show or read a book because one of your queer friends tells you it’s good, not because Netflix is recommending it.” Quindlen says. “We trust our friends.”

The success of Quindlen’s books might seem like it happened overnight, but it’s been a steady process of fans finding the book, and taking their passion online. “It’s literally all been organic, word-of-mouth, this slow spread of queer people recommending my work to other queer people, Gen Z kids sharing and talking about it.”

BookTok also played a part: in the past year or, “Her Name in the Sky” has found a new fanbase on TikTok’s dedicated queer books community, a passionate group of readers who find their next great queer read via the app’s bevy of queer curators.

It was Quindlen’s Gen Z readers who first got the idea to pitch Olivia Wilde for the film adaptation. Fans even created an entire fake Deadline announcement that (hopefully) will manifest into reality.

And they didn’t stop there.

When Amazon’s post-apocalyptic teen drama “The Wilds” came out last winter, fans fell in love with actress Mia Healy’s portrayal of Shelby Goodkind, a closeted lesbian and ex-beauty queen raised in a conservative Christian household. Fans of “Her Name in the Sky” were quick to point out that Shelby’s story was close to Hannah’s Quindlen’s lesbian protagonist fighting for a shot at romance in spite of her conservative Southern upbringing. Soon enough, Quindlen’s fans were telling Healy that this was her next great role.

“They were like, hey bestie, you need to order this book, because we want you to play Hannah.” The fans got through to Healy, and she started posting about “Her Name in the Sky.”

“I sold like, a thousand copies of the book in two weeks because of Mia [Healy] posting about it.”

Now, “She Drives Me Crazy,” Quindlen’s third novel, is enlisting its own passionate audience.

One of my favorite authors did it again! Everyone knows Her Name in the Sky and Late to the Party have a very special place in my heart and I’m excited to read She Drives Me Crazy and make room in my heart for her too. Please make sure you support the wonderful @kellyquindlen. 💓 pic.twitter.com/PR3hmvzT1k

That means that Quindlen is in a perfect position for a writer. She’s in touch with her fans, and they knew they can trust her to keep giving them the stories they’ve been craving. “People keep asking me when I’m going to write the sequel to “Her Name in the Sky.” I tell them, sort of tongue-in-cheek, ‘you can have a sequel when ‘She Drives Me Crazy’ hits the bestseller list.”

As queer people, we spend so much time being sad about how horrible the world is to us. Quarantine made it even harder to see the clear skies beyond the gloom: a lot of us seem to have lost hope completely. For a lot of us, queer books and TV shows have been the thing to keep us hanging on for this past year. They’ve kept us thinking about the future, and how we’ll see it again, someday.

Until then, there’s plenty to root for.