In Susan Sontag’s essay “Notes on Camp,” she wrote: “Camp taste is a kind of love for human character. It relishes, rather than judges, the little triumphs and awkward intensities of character.” This affinity for the extreme was what made films like Pink Flamingos and Showgirls so exciting, and what makes the earnest depictions of queer characters in mainstream movies so dull. Where’s the mix of absurdity, hilarity, and terror that defines the modern queer experience?

Enter the campy horror film Killer Unicorn. Written and produced by Jose Alvarez and directed by Drew Bolton, Killer Unicorn takes the inhabitants of drag and queer party scenes found in Williamsburg venues Macri Park and Metropolitan as well as more illegal places like The Spectrum in Ridgewood into the sunken place. The story is a loving read on the queens and club kids Alvarez surrounded himself with when he first came to New York from Colombia. The drag queens are recognizable (the most famous is Bushwig co-founder Horrorchatta, followed by Rify Royalty), and Brooklyn nightlife vets may also know the door girls, DJs, and fashion kids who populate their Instagram feeds. 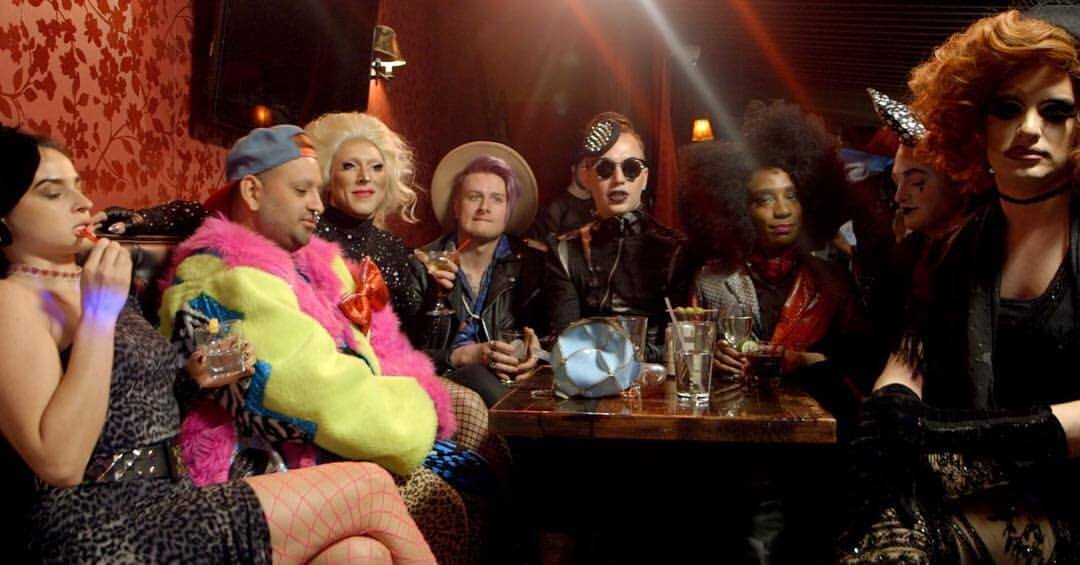 It doesn’t matter if you know them going in – by the end of the film, you’ll feel like you’ve partied with them for ages. They’re all playing exaggerated versions of themselves. Horrorchatta is the concerned yet fun house mother. Door god Markus Kelly is the bitchy socialite who’s just trying to get drunk for free. Ex-House of Field stylist and fashionista Leo Gugu is a fun loving spazz. Some are actors, like the film’s lead Alejandro La Rosa, or the superb Monica Bradley as Coke the party girl. They all come under attack from a mysterious man in a unicorn mask who’s intent on killing everyone.

This is all done with an obscene level of schlock and camp; Young and Fabulous meets Halloween. Instead of Williamsburg, the film’s alternate universe is called Anusburg, and the denizens of Anusburg are too busy admiring/reading each other’s outfits and taking every drug they can get their hands on to notice their friends being killed all around them. It’s played comically, but there’s a dark truth to it, a veiled critique of the stunted relationships of bar culture. Watching Killer Unicorn in a packed theatre filled with queers is a riot of a time, but later you’ll start to think darkly about your friend’s drug use or get spooked on the way to a routine Grindr hookup.

“Like obviously it’s fiction,” Alvarez tells INTO. “It’s not word for word critique of our gay community, but it is a little bit.” 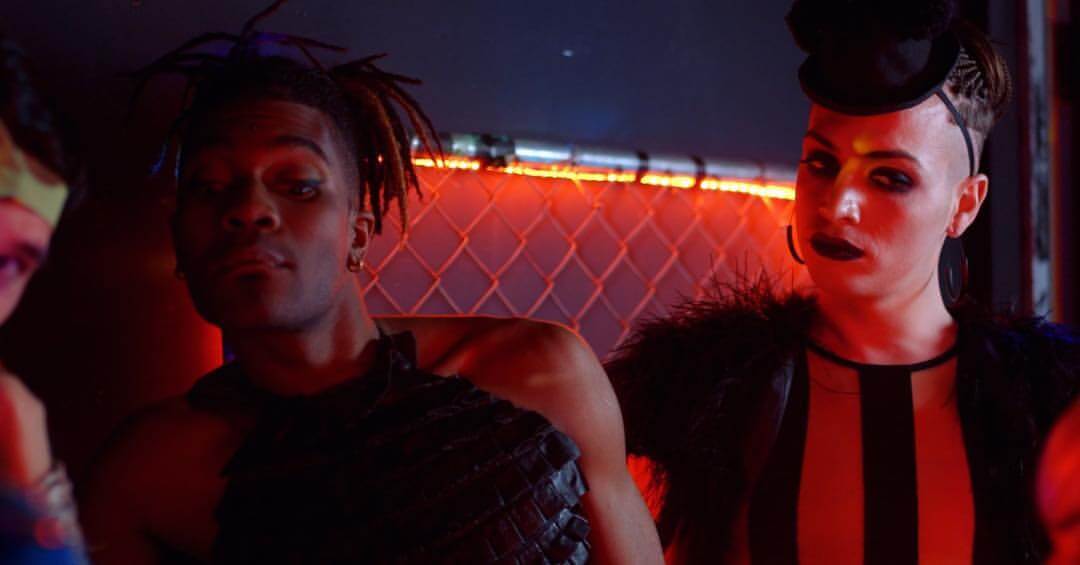 Alvarez’s exaggeration of the nightlife world’s character flaws cement Killer Unicorn’s place in the camp cannon. Alvarez says a mixture of extravagance and darkness felt only natural for depicting Brooklyn.

“I’ve always been a huge fan of horror and I’ve always been a huge fan of camp,” he says. “ When you move up to New York you’re thrown into it – and I was thrown into the scene. A lot of people who’ve seen the film say ‘You got the darkest parts and the best of parts (of the scene).’ I think it really just came from experiencing all of this firsthand – they were always tied.”

The lack of seriousness is a welcoming refresher in a world where the onscreen queer experience can seem too studied or inspirational. Killer Unicorn does a coke bump in the face of respectability politics.

“Straight people got to make Human Centipede. Why can’t we make something really twisted and have fun with it?” Alvarez says.

The camp in the movie comes from its over the top characters and gore, but also from its lack of coherence. At the NYC premiere, I overheard Merrie Cherry asking one of the film’s stars exactly what got cut off in their torture scene – the shot wasn’t clear enough for her to be sure. That’s the not the only incoherent aspect about the film. Once the characters discover the killer, the plot starts to spiral. 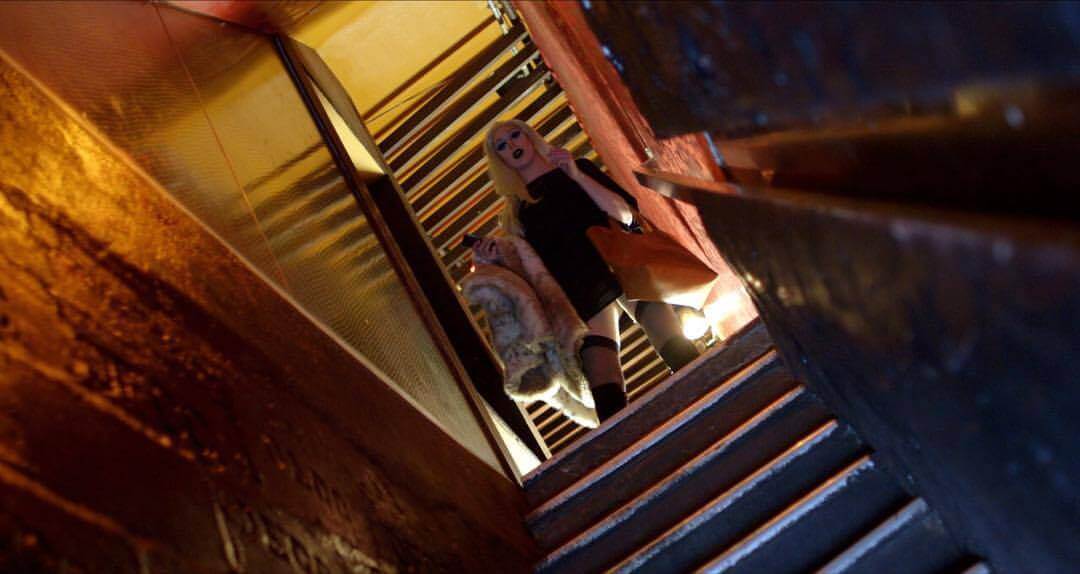 This chaotic plot structure references a chaotic time on set. Some queens failed to show up for their days of shooting and others walked out.

“If you watch the film you’ll see who stopped showing up,” Alvarez says, likely referencing Misty Meaner, Mocha Lite, and Shiny Penny, who all make cameos early on but fade out. “They’re there early and they just don’t pop up in the movie again.”

Emi Grate, on set out of drag to be an extra,  had to fill in the last min as The Door Girl when the scheduled performer didn’t arrive to the set the day of shooting.

”We were like ‘Oh my God, we don’t have a queen to die!’ and we were in the middle of nowhere shooting. We cannot get someone here in drag in an hour,”  Alvarez says.

“We were like: ‘Emi Grate, go to the makeup girl and see what you can do with what she has and go to wardrobe and see what kind of drag or whatever you can get into,” Bolton says.

“We got incredibly lucky that she was really awesome on camera, could remember lines super easily and could act.”

This was two years ago, before Emi Grate won Mr(s) BK and eventually got shout-outs from Alaska in Paper Magazine. 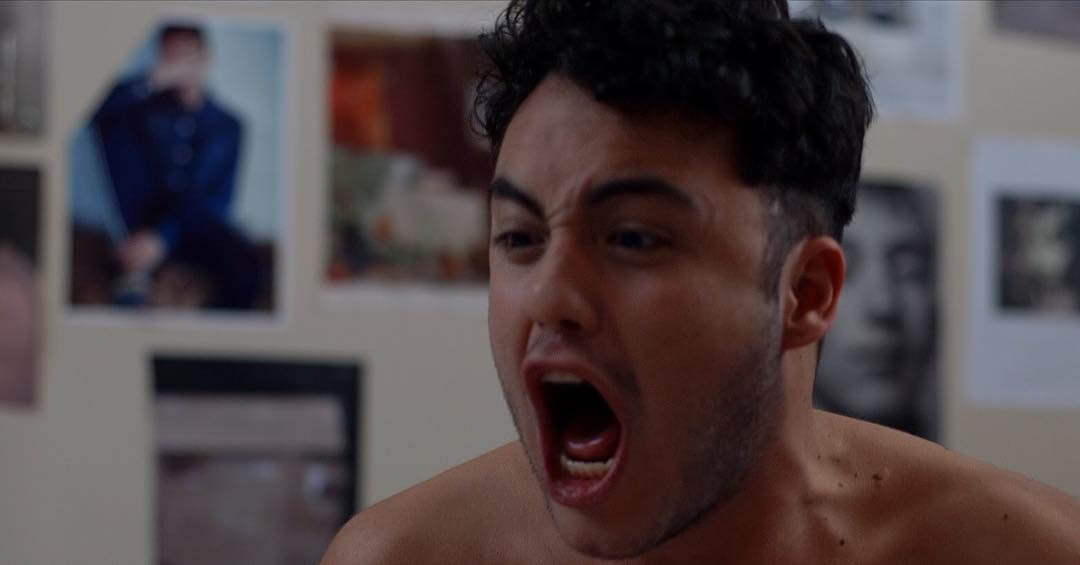 Killer Unicorn’s strength isn’t in plot, but in its death scenes. Alvarez has a talent for combining tropes familiar to faggots and horror fans into unexpected yet long-needed combinations. There’s a truly gruesome acid enema scene, knife stabs through glory holes, and – Alvarez’s personal favorite – “someone getting fisted in the darkroom and the killer comes and chops the arm off,” he says. “The queen crawls away with the arm inside her and then gets strangled by the dead arm.”

On character does laced coke until he dies. At one screening, some people laughed and others groaned in recognition. The movie’s best death is a good litmus test for whether or not you’ll like the movie. If watching boylesque star/drag queen Rify Royalty shout “You’re ruining my performance” right before a killer in a unicorn mask stuffs his mouth with a funnel and drowns him in urine doesn’t fill you with shock and glee, then maybe skip this one. It’s gruesome, hilarious, and completely inane. What performance would Rify have done while strapped to a table by her own volition if the Killer hadn’t appeared?

It’s not for everyone, even some of the queens who starred. “Not everyone was like ‘Hell yeah!’ immediately,” Alvarez says. “There was one person who it took until they were on set for them to be fully convinced 100 percent. We also had some queens decline their roles and who were like ‘I’m sorry I like this but that’s just not me and I don’t wanna do this.’” Bolton says.

Alvarez has a fondness for the profane, which comes across in the characters’ exaggerated sex drives and the violence that’s sprinkled throughout the film. There’s also a good amount of Lena Dunham-style navel-gazing at play. As well as basing the film’s script on the nightlife characters he rubbed shoulders with, Alvarez stars as Pup, the cute new boy in the scene. The film spends a long time on a very realistic sex scene between him and the film’s leading man. 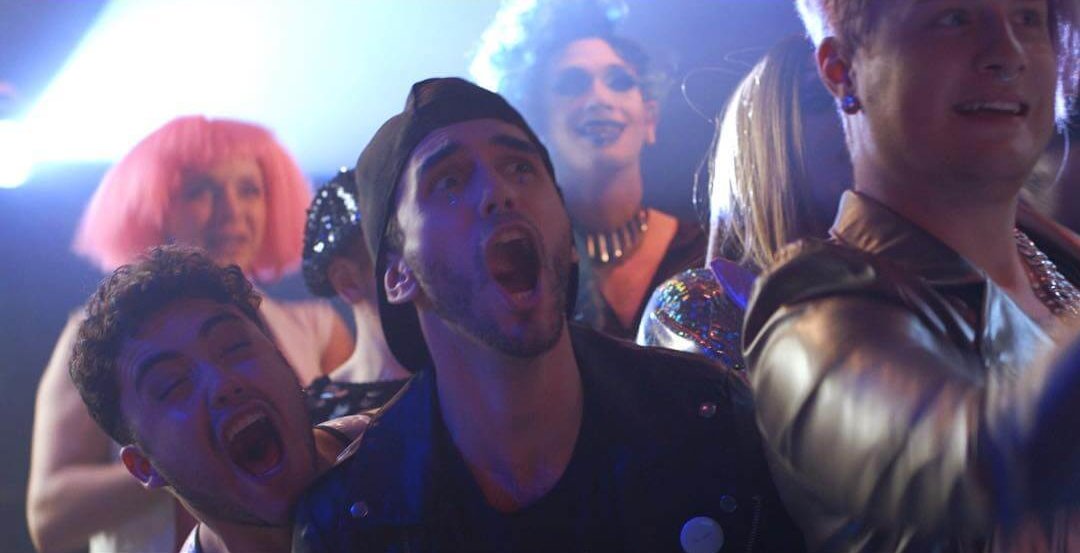 Ultimately, the movie gets more fun if you know the ins and outs of Brooklyn drag. People really wouldn’t bat an eye if a queen showed up at a party covered in blood. Characters like Lady Havok make more sense if you’ve encountered how annoying she is in real life. Drag Queen Ruby Fox’s moniker in the film, Ruby Falls, is eerily prominent both because of her fall from grace in the Brooklyn scene and the allegations that she pushed fellow queen Gemma Bubblegum down the stairs at the Dream House.

Still, there’s a perverse brilliance in Killer Unicorn that goes beyond just insider knowledge. Some gay teens will seize on it, maybe find the stars on Instagram, and dream of Brooklyn parties and faggotdom. If nothing else, it’s a much-needed dose of shock and fun in the increasingly stale world of Queer Cinema.

Visit Killer Unicorn‘s website to find out where it’s playing near you.