This week in “nobody asked for this”:

Remember Kim Davis, the Kentucky county clerk who refused to issue marriage licenses to same-sex couples in 2015? Well, she wrote a book called Under God’s Authority: The Kim Davis Story. The book’s official press release describes the demonic text as an “amazing narrative of redemption and courage.”

There’s nothing brave about denying a gay couple a basic civil right, but sure. 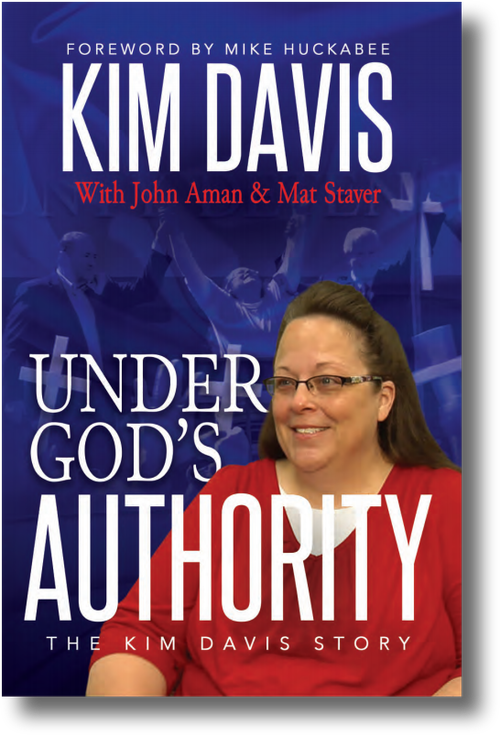 In 2015, the Rowan County, Ky. clerk sparked national controversy when she refused to issue a marriage license to a gay male couple. As a result, Davis was jailed for five days by a federal judge, because her refusal violated the Supreme Court’s decision on Obergefell v. Hodges, which ultimately legalized same-sex marriage.

The hatemonger ignited a conservative-led conversation on religious freedom and details this “unlikely saga” in her new book, where Davis tells her side of story on this “disastrous same-sex ‘marriage’ opinion.” (Friendly reminder that same-sex marriage is not an opinion, it’s the law of the land, and in that context, marriage doesn’t require quotation marks.)

According to the Lexington Herald Reader, the book chronicles Kim’s “dramatic encounters with furious, fist-pounding, homosexual men,” which sounds like an average night out in West Hollywood.

“It’s a great read,” Huckabee said. “But more than that, this remarkable story of what God did in Kim’s life gives me hope for our nation. I think it will give you hope, too.” The only thing this book is giving me is agita.

“Kim Davis is one tough lady,” said Franklin Graham, CEO of the Billy Graham Evangelistic Association and Samaritan’s Purse. “In a culture that demeans people who obediently follow Jesus, Kim Davis drew on His strength as she experiencedand enduredpersecution from the culture, the court, and the crowds, and survived to tell about it all in her compelling book Under God’s Authority.”

“Her story proves that one person can really make a difference when taking a stand for Christ!” Graham concluded.

If you’re completely gobsmacked by Davis and her hate-filled, homophobic minions, fear not: She’s up for reelection this year but will be challenged by David Ermold, one of the men to whom she denied a marriage license in 2015. Ermold is one of four Democrats hoping to challenge Davis for the county clerk job. According to his website, Ermold hopes to “restore professional leadership, fairness and responsibility” to the county.

Congratulations, Kim, you played yourself.