Kristen Stewart is currently in Cannes at the esteemed French film festival, serving as a member of the female-majority jury. As if we didn’t have reason enough to love her, the actress talked gender and adapting her first queer-friendly screenplay.

Stewart is known for her lip-biting acting roles, but she’s finally ready to delve into a behind-the-scenes role as a screenwriter. The 28-year old wants to write “the best fucking female role.” For her, that journey begins with adapting the life story of queer novelist Lidia Yuknavitch, The Chronology of Water.

“I love her novels but her memoires it’s deeply personal to her,” Stewart says in a video interview with Cannes. “She’s in my blood and I knew that before I met her.”

The actress will write and direct the film, but she doesn’t plan to star.

“I’m making the movie this summer but other than that, my only goal is just to finish the screenplay and hire a really spectacular actor: I’m going to write the best fucking female role,” she quips. “I’m going to write a role that I want so badly but that I’m not going to play.” 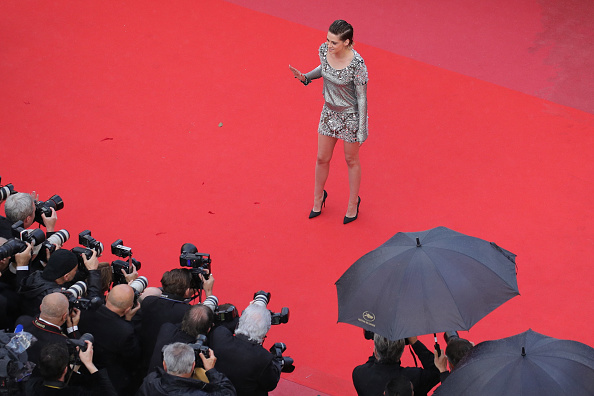 Yuknavitch is a bisexual woman, and according to the book’s description, the memoir details the author’s developing sexual attraction to both men and women, as well as tracing her struggles with addiction, self-destruction, and “ultimately survival that finally comes in the shape of love and motherhood.”

Stewart also talked gender fluidity, in regards to one of her previous roles. When asked about the fluidity of her character’s blurred gender lines in Personal Shopper, she said, “I think that the loss of my character’s brother is so central, it’s almost like she wants to be him in order to have him closer to her, in order to not have to miss him and she’s going through this really difficult grieving process,” adding, “I love that there in an ambiguity in the character, you really never quite know who the fuck she is because she doesn’t know herself.”

The actress also spoke on her own relationship to gender. When asked if she could play a male character, Stewart said, “Totally! Gender is a bit of a myth if you ask me. Everyone’s individual relationship with gender is totally theirs to define. But I really think because of the flexibility inherent to gender, there’s room for all types of approach.”

As for the future, Stewart hopes to keep acting, as well as writing and directing. The Chronology of Water will mark her feature film debut as a writer.