Lara Lillibridge’s debut memoir, Girlish, bears the weighty subtitle “Growing Up in a Lesbian Home,” but she’s clear from the start that she has no universal statements to make about the children of gay parents. Girlish is not an exercise in either denigrating or defending the validity of families like Lillibridge’s–though she also acknowledges that those interpretations will be made whether she leaves room for them or not. When writing about being raised by lesbians, Lillibridge says, “It seems like there is no way to just write [my] story without becoming someone’s poster child.”

Throughout the narrative of her childhood–told, unusually, in the third person–the author resists easy generalizations and too-broad takeaways about families like hers. She doesn’t back away from the intimate, sometimes upsetting details of being raised in a home governed by the unpredictable outbursts of her bipolar stepmother, with a mother who often left the house rather than watch her partner verbally and sometimes physically assault her children, and a father whose residence in Alaska only underscored his emotional distance. Lillibridge is likewise unflinching in her depiction of the effects of neglect and trauma in her adolescence, played out through risky sexual behavior and substance use.

But Girlish is far from gratuitous or exploitative; even in the story’s darkest moments, Lillibridge writes with extraordinary compassion for everyone involved. After describing the attack from her stepmother that culminated in Lillibridge running away from home, she detours into a present-day phone call in which her stepmother describes the altercation as she remembers it. “I felt it was important to show her side,” Lillibridge tells INTO. In this section, and elsewhere throughout the book, the narrative loops back on itself: telling the story of being told a story she’s already told, Lillibridge weaves the conflicting perspectives into a story of their own.

Girlish is challenging to read–as a parent, as a former adolescent girl, and most especially as a gay parent with mental illness. It’s populated by terrors I remember from my own childhood and those I fear for my daughter. Lillibridge knows that her story can all too easily be manipulated to illustrate the supposed evils of LGBTQ families, of divorce, of mental illness, but the lesson she offers is much more nuanced than that. Lillibridge understands–as she demonstrates in the above anecdote about the fight with her stepmother–that the stories we hear, and the way we hear them, become part of our own stories. She is thoughtful about the ways in which her own storytelling will shape future histories: her own, her children’s, her readers’, even her parents’.

“Will my children hate me for being gay, do you think?” 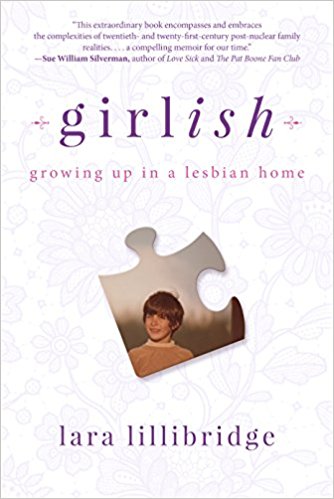 Of course that’s the question–one of the questions, anyway–that Girlish tries to answer. It’s also the question Lillibridge’s now-teenage protagonist, named simply “Girl,” is asked by her boss on her first day at a new job. Lillibridge says, “She’d come to learn that his question–about his children hating him–was the first question every gay parent would ask her.” But the reassurance that those parents, that boss, and readers are looking for, the vindication, some proof that our children are just as happy as the children of straight people–that’s not what Lillibridge has to offer.

“Well, yes, they will,” Girl tells her boss. “But if you weren’t gay they’d hate you for something else.”

This is the heart of Lillibridge’s story: that being a parent is hard, that being a child is hard, that being a family is an incredible struggle of balancing so many conflicting needs and hopes and fears. When she talks about her mother and stepmother, she says, “…the air is thickened with the expectation and hope of a generation of lesbian parents,” but it isn’t Lillibridge’s job, nor is it her goal, to assuage an entire culture’s prejudices against LGBTQ families.

Girlish resists any attempt to generalize from it, but still invites the reader to identify. The memoir’s title itself–and especially the subtitle–gesture toward the idea of an archetypal girlhood, an ideal of home. In much the same way, Lillibridge’s third-person narration and refusal to use names for the main characters in the story–they are instead called “Brother,” “Mother,” “Stepmother”–presents the reader with an interesting conflict: a specific, detailed character whose name is a blank slate.

“I think all memoir seeks to be universal, while at the same time we can only tell our own story,” Lillibridge says. By writing in the third person, she relinquishes a bit of control over herself as a character, opening the possibility for readers to relate more fully. “My hope is that someone else out there who needs to see a family like theirs will see it in the book,” she continues.

Because according to Lillibridge, it was the isolation of her childhood–not her mother’s orientation or even her stepmother’s abuse–that weighed on her the most. Her parents being closeted made it difficult to seek support in dealing with her stepmother’s volatility.

“I couldn’t really talk about my family to anyone,” she tells INTO, because the fact that her parents were together was supposed to be a secret. “It would have been very beneficial if I had known what was going on and who I was allowed to talk to about it, what was a safe place to talk about it.”

The act of telling one’s story is powerful; denied that outlet, we struggle to make sense of what has happened to us or move past it.

Through her writing, Lillibridge has found the safe space to shape the narrative of her own life, and hopefully allow others to do the same.

“I’ve gotten to the point of closure,” she says “It’s a story that lives on the page more than it haunts me.”