We caught up with Leikeli47, the Brooklyn-bred rapper, ahead of her live performance at Red Bull Presents: ATL Is Burning, a vogue ball thrown by Red Bull, Morph ATL, and Southern Fried Queer Pride.

Having just released the second bundle of songs from her upcoming album Acrylic, the rapper shared her intentions behind the Design bundle, advice and praise for her queer fans, and thoughts on the power of anonymity.

What is the power behind the mask?

It’s to keep the focus on the art, you know? I’m just so proud of myself and I say that humbly, as humble as I know how to say it, because I really set out to be heard first. I really set out to lead with my music, which is kind of difficult for some people. The mask helps me to push my narrative first versus what I look like or anything like that.

Often, when people ask about my mask, my first response is what mask, you know what I’m saying? Because it’s part of me. It’s like a second skin and it’s my superhero cape and it gives me power to be free. And it’s helped me — it’s been therapeutic in a sense, as well, but all of it is to completely keep the focus on the art. Listen, have fun, dance, get into all of these sounds, get into all of these colors before you get into anything else, you know?

You’re originally from New York. In Design, you reference ball culture. What does ball culture mean to you?

Um, it’s everything. You know, the ballroom scene is just one big, beautiful, creative expression, you know, and it’s like me. Ballroom is just, like, me. It’s free and I love it.

I often think that we owe the culture a lot more, you know what I mean, just from the ballroom scene, just the LGBTQ community as a whole. Just from the rhetoric, the style, just everything. So, it means everything. It means love, it means freedom, and I just love that it’s getting, or that’s it’s starting to get its proper due.

So it’s really meaningful to you. Is that why you chose to be a part of the ATL is Burning vogue ball tonight?

Yeah. I mean, you know, it’s something that I would do no matter what. Like of course I’m excited to participate, just to be performing and to see other performers but yes, I definitely decided to do this because it’s a fun festive event and culture wise it’s just extremely important. The ballroom is no different than any other scene, you know? I’m just excited that they welcome me with open arms as I do with everyone. It’s all about love, it’s all about fun, it’s all about dance, it’s all about freedom of expression. So you know yeah, anything that involves that, I’m on board.

Tell me about Acrylic.

If you smell acrylic, you know where you are. It’s an invite to where I’m from. It’s another way of getting people to come into my world and to know who I am. Acrylic is honestly just a bunch of stories that evolve around the ghetto, where I’m from.

I speak about our love. I speak about our campuses. I speak about everything that revolves around my culture and the places that I grew up and the places that I’m from. A lot of people from the areas I live, I’m sure they can listen to this and hear something that they relate to. For those who aren’t from where I’m from, consider this your invite into my world, you know? That’s pretty much how Acrylic was birthed. Acrylic is a part of a trilogy that I started some time ago that includes my debut album, Wash & Set. There’s a third installment coming sometime next year.

Is there any inspiration in Acrylic that draws from Kid Sister?

It’s crazy that you said that. Kid Sister is one of the innovators. She’s one of the ones that does not get the credit that she deserves. She’s definitely among those groundbreaking artists, you know, along the lines of Santigold, M.I.A. She’s always done things her way and you know, I’m glad that you even brought that up. That’s crazy. I didn’t even think Kid Sister because “Pro Nails” — yes, “Pro Nails.”

But Acrylic is definitely my story, you know. It was birthed directly from me. Again, it was just a creative way to invite people in to just get to know me more. As a new artist, I’m still like, people are still discovering me. there are some people who have been with me since day one but a lot of people are just now coming on board and I love it, so I just feel like as a new artist, I’m going to continuously just pump out those invites to get to know me. So once you get to know me, we can just keep going and keep the party going.

Shout out to Kid Sister, for sure. Let it be known that she is for sure an innovator and one of the best to ever do it. 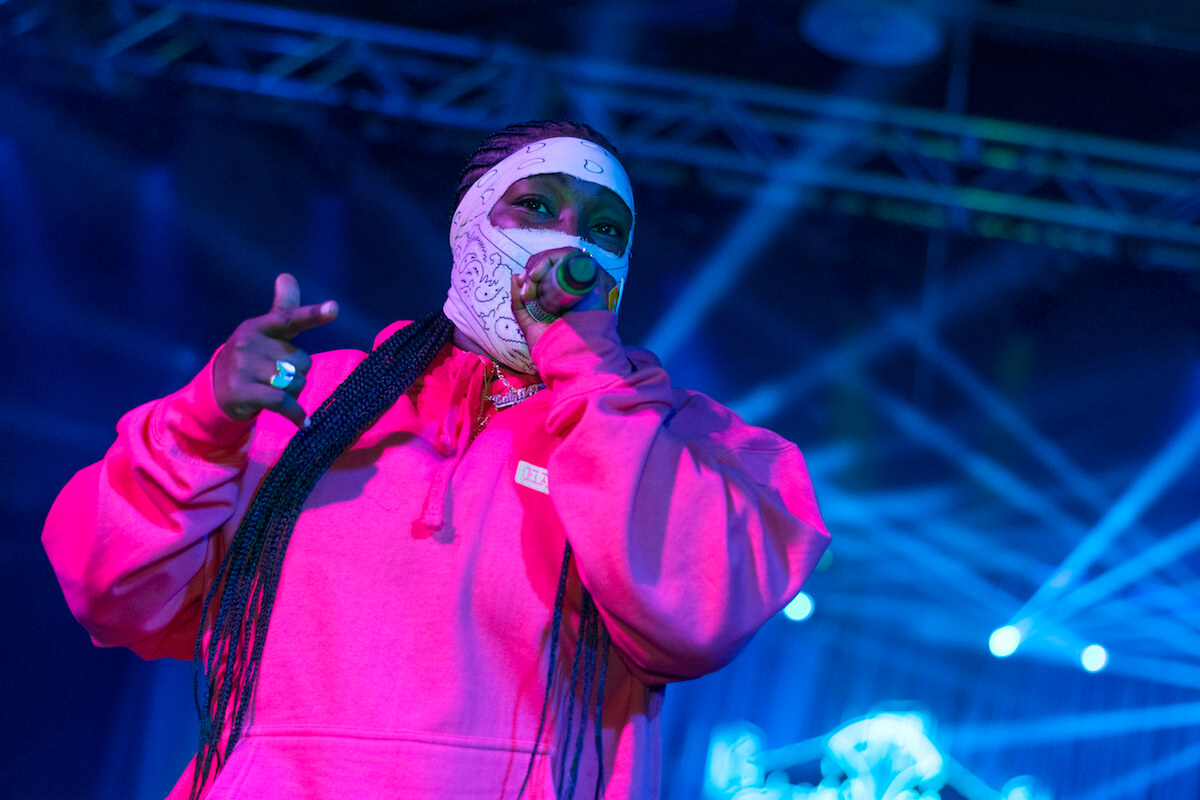 What can we expect from the new album?

It’s definitely me expanding on my sound. I’ve grown musically, so I just wanted to explore that. A lot of Acrylic was done a long time ago, but once we got near to dropping again, I definitely went in and poked some holes and just really had a little more fun with updating my story or whatever.

You can expect a lot of fun, a lot of feelings, a lot of dancing, and that’s pretty much the goal of it. I want people to listen and have fun. Like feel it on a spiritual level, you know? Just have fun and hopefully be inspired — not even hopefully, please be inspired to do things and run through walls your way. That’s what Acrylic is about, it’s about drawing outside of the lines, painting outside of the lines, using your own colors, actually creating your own colors, and that’s what I did with this project and it’s something I continuously do. Grow and expand on the sound and just have fun.

L.A. is my home. I was born and raised there. You filmed “Girl Blunt” at Moonlight Rollerway here in LA.

I did, yeah, but there’s so many other fun skating rinks in LA. You got Northridge, you got World On Wheels, but Moonlight just came together for the shoot. It’s such an iconic place to shoot. They shot the N.W.A. movie there. A lot of different things, so I was happy they were so gracious enough to let us come up in there and handle our business and have some fun. We kind of had our own little party, our own little skating party as you can see. It was really fun. It was really, really fun. I like that skating rink but I really love World On Wheels.

You’re known for being sweet. Do you have any advice for other artists that are navigating the music industry?

Yeah. I mean, these are the things that I personally do. Listen, be kind, really appreciate the people that are around you that are going to push you, and make sure that you have some really positive people, real optimistic people around you. People that believe in the vision.

Have fun with your art, your paint, whatever, your basketball, your football, your book, your pen, whatever it is that you’re striving for. Whatever goal it is that you have in mind, do it with grace. Understand that there are steps in everything. Don’t be in a rush to go nowhere fast. That’s the key, right? Everybody wants it quick, but it’s nothing like just going at it balls to the wall. Run through that wall. Run through it by any means necessary.

What message do you have for your queer fans?

Grab at your tits and stand taller. What I mean is grab your titties and go, honey. Stand tall in your message. Don’t you ever let anyone make you feel inadequate. Don’t ever let anyone make you feel less than. It’s because of the community, I say this often, we owe so much to the LGBT community. It’s such a beautiful world, where it’s just nothing but love and positivity and we can learn so much from that and as an advocate, I’m always going to stand up for what’s right in the community, you know what I’m saying? I think that’s pretty much it for me.