In an interview with KPCC’s The Frame Thursday, Lena Waithe spoke for the first time on the sexual misconduct claim made against Aziz Ansari. Waithe, an out lesbian, is an actress and writer on Ansari’s award-winning Netflix series, Master of None and long-time associate of Ansari.

“Here’s the truthin every situation, it’s not always black and white,” Waithe said. “And I know that’s simple for people, and it’s easy for people to [ask], ‘Whose side are you on?’ There are no sides, really, in some of these scenarios. I’m not on Harvey Weinstein’s side, I’m not on Kevin Spacey’s side. But I think you have take each situation [individually]. You can’t just say, ‘Well, I’m on this person’s team’ or ‘I’m on that person’s team.’ It doesn’t work that way.”

To some degree, yesthe public’s reckoning with sexual harassment and assault is complicated and complex in ways that sometimes feels too nuanced for productive discussion on platforms like Twitter or Facebook. But simultaneously, it’s not that complicated at all: now is the time to be listening to women, believing women, and empowering others to speak up. The graphic, detailed, and controversial Aziz Ansari piece that was published on Babe has inspired much discourse on consent and the spectrum of harassment and assault.

For her work on Master of None, Waithe made history last year as the first black woman in history to win the Emmy for comedy writing. Her “Thanksgiving” episode took home the prize Outstanding Writing for a Comedy Series. And more recently, the Waithe-created Showtime drama The Chi debuted in January, and was just renewed for a second season.

“I think a big thing is, we have to have a dialogue,” Waithe said. “And I think if we’re unwilling to have a dialogue we’re gonna continue to keep hitting our heads against the wall. We have to start reeducating ourselves about what consent is, what’s appropriate behavior at the workplace.” 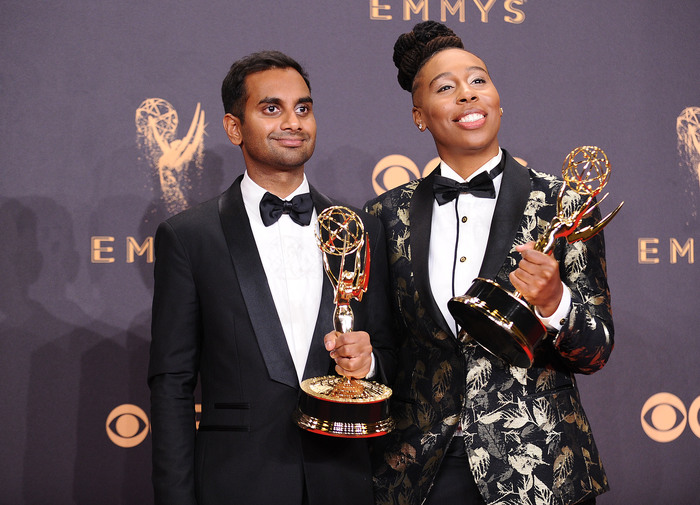 A story like the one reported by Ashleigh Banfield on Babe has been dissected and censured, with some asking if Ansari’s behaviors “count” as assault. This sort of rhetoric is extremely damaging to the #MeToo movement and to survivors of assault, because it further urges victims to question whether a negative experience they had is bad enough to be discussed.

However, Waithe has been a champion for the Time’s Up initiative, and has advocated for better codes of conduct regarding sexual assault in the workplace.

It’s bananas to think that a person might now know what counts as appropriate workplace behavior, but if #MeToo has showed us anything, it’s that men and women in the workplace are sometimes on very different pages.

“It’s about really educating ourselves and not stepping in it and just [saying], ‘Oh, I’m sorry. My bad,’ and sort of keep going,” Waithe said. “But it’s about really sitting with yourself and educating yourself in terms of what consent is, what it looks like, what it feels like, what it sounds like. And all of us starting to really act accordingly based on this new information that I think we have now. We all gotta start talking to each other, start educating each other.”