Queer playwrights Kimberlea Kressal and Gina Young met while going to school together at NYU Tisch School of the Arts, and began collaborating on stage plays for their feminist theater company. It was the Sapphic salad days of the late-’90s, a pre-L Word lesbian haven in New York’s Lower East Side. It was a moment in time when queer women didn’t have to go further than a few blocks to hit the women’s bookstore (Bluestockings), sex shop (Babeland), and dyke bar (Meow Mix). Twenty years later, women-focused spaces are shuttering (Meow Mix closed in 2005), and the communal nature of the community feels almost non-existent save for pop-up events in major cities.
Young, whose work includes Tales of a Fourth Grade Lesbo and Femmes, eventually relocated to Los Angeles, but a few years ago, Kressal began developing a musical about the communal nature of that time in dyke culture, while also updating text and lyrics to continue its relevance into today. In 2010, Lesbian Love Octagon premiered in New York City, with additional music and lyrics from Will Larche. The story largely follows Sue, who is brokenhearted over Darla, who left Sue for Sue’s ex-girlfriend, Jerry, who has recently transitioned. Sue leans on her last ex, Wendy, to help, but Wendy is dealing with her own drama with her current girlfriend, Jess, whose best friend is also her ex, Chris.
Sound confusingly familiar? It is — and that’s what makes it so fun. Kressal brings stereotypes and truths to life in song with Lesbian Love Octagon, and after two runs in New York, the show is coming to L.A. for a one-night-only live performance directed by Kressal’s long-time friend, Gina Young.
“For me, it’s a show about how in a small community, you’re always dating your ex’s exes and the exes of your friends,” Young tells INTO. “It’s also a show set …  at the dawn of the internet age, when online dating and social media were about to drastically change the dating landscape.” 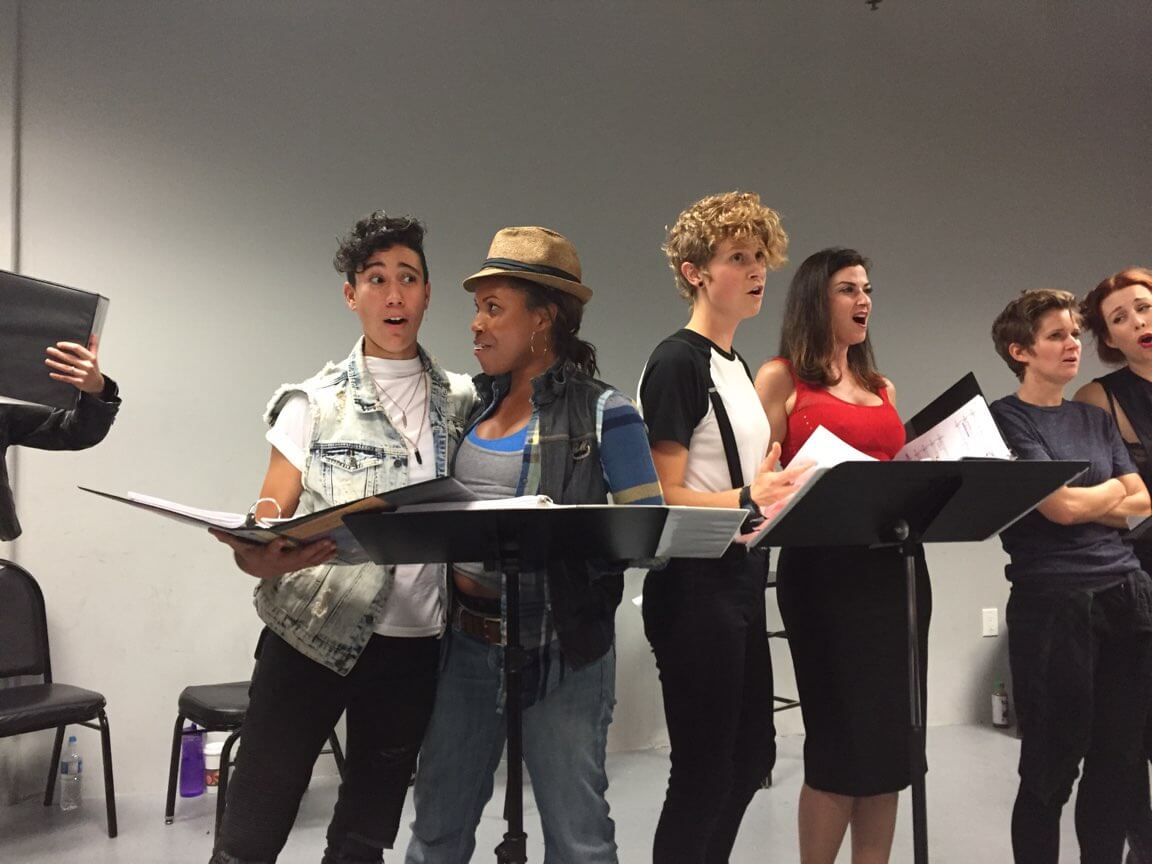 Songs like “Ubiquitous Exgirlfriend” and “Butch on the Inside” help propel the interwoven stories of lovers, exes, and friends as each lead laments about lesbian, bi, and trans-specific circumstances. Sue doesn’t know who she is without Darla, while Jerry worries Darla is only interested in him for his being trans. Wendy loves Jess but also loves being available, while Chris is waiting for Jess to realize she’s the one. Meanwhile, the chorus helps provide the perfect peanut gallery, gossiping about dyke drama and sometimes partaking in it with a dairy-free latte, shot of wheatgrass, or something stronger.
Young says her goal for the L.A. performance was to “infus[e] the hilarity of this show with groundedness and authenticity, a real queer cast and true heart.” And though it’s a concert reading and not the entire show, audience members won’t leave feeling like they’re missing out. Instead, they’ll feel seen in a way they never are by most large-cast musicals. The most well-recognized lesbian-themed musicals (Fun Home or Indecent as two recent examples) are also quite tragic tales, which Lesbian Love Octagon is surely not.
“A lot of my work is very queer and very experimental, but of course I also secretly — okay not secretly at all — love musicals, and dance, and the kind of comedy where you laugh until tears are squirting out of your eyes,” Young says. 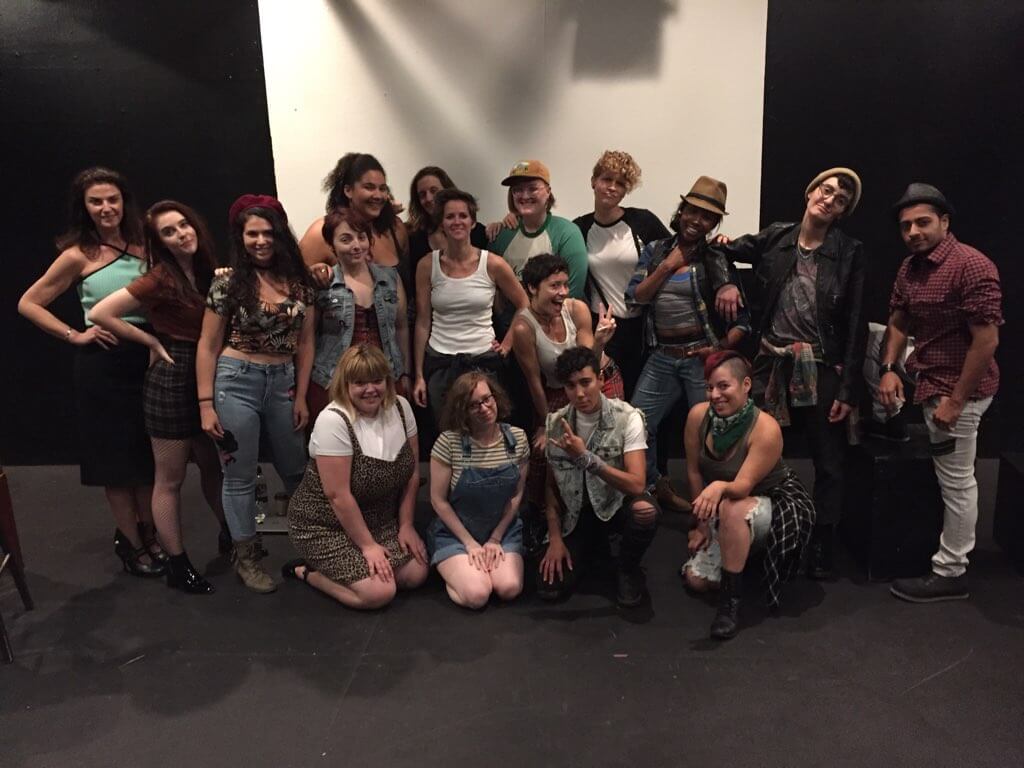 There is, however, a “bittersweet nostalgia,” Young notes, for a time when lesbian spaces were more common, and queer women could come together regularly in bars, bookstores, and sex shops that encouraged community-building as well as dating. But what’s great about Lesbian Love Octagon is that neither Kressal nor Young are looking to stay stuck in the ideologies of the late ’90s or early 2000s, which were less progressive in some ways, and could also be problematic. Yet there are characters who come off as biphobic or unclear about trans identity, though they are used to represent the kind of outdated stances that are sadly still pertinent today among some cis lesbian women.
“The plot touches on some ways that the gay and lesbian community has failed transgender and bisexual members of the community, and a lot of the language around those identities has changed and evolved drastically over the last decade,” Young says. “So the script has had to evolve, too.”
Some of the original New York cast are part of the L.A. production (including Gretchen Wylder, reprising her role as Wendy) as is Julie Lake, best known for Orange is the New Black. Other castmates, most identifying as LGBTQ, include:  Anna Goodman, Angelica Rowell, Bri Sarikcioglu, Caitlin Lee Reid, Cloie Wyatt Taylor, Felicia Blum, Julie Ouellette, Justine Woodford, Lindsay Zana, Liz Eldridge, Natalie Salins, Nicole Pacent, Nicole Stouffer, Samantha June, Shaan Dasani, and Victoria Ortiz. 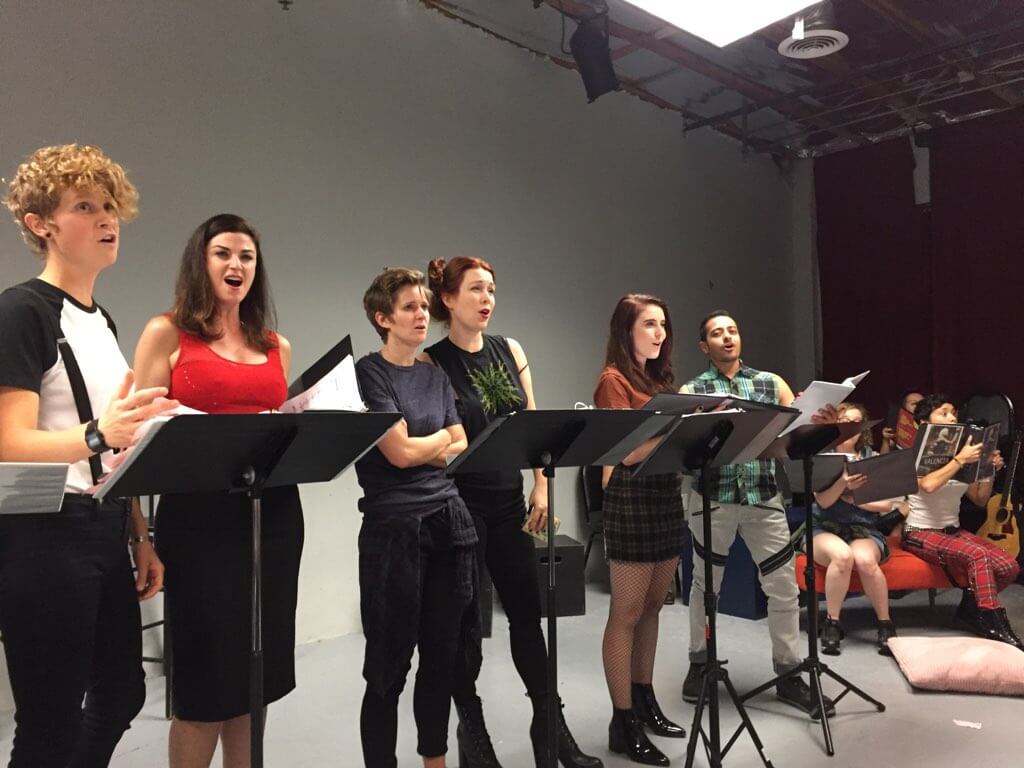 “The show is actually archived at Lincoln Center for being the first of its kind,” Young says. “I’d honestly be surprised if there has ever been a play or musical with this many queer characters, especially with queer women at the center.”
Young is a fixture of queer, feminist theater in Los Angeles, hosting regular Feminist Acting Workshops and producing the performance series Sorority, among other projects. Next, she says, she’s working with her longtime friend on pitching Lesbian Love Octagon as a TV series.
“Crazy Ex-Girlfriend with an all-queer cast?” she says. “We can dream.”
Lesbian Love Octagon plays tonight at the Bootleg Theater in Los Angeles. Pre-sale tickets are sold out but some will be available at the door. Check the Facebook event page for updates and further info.
Tags: Art