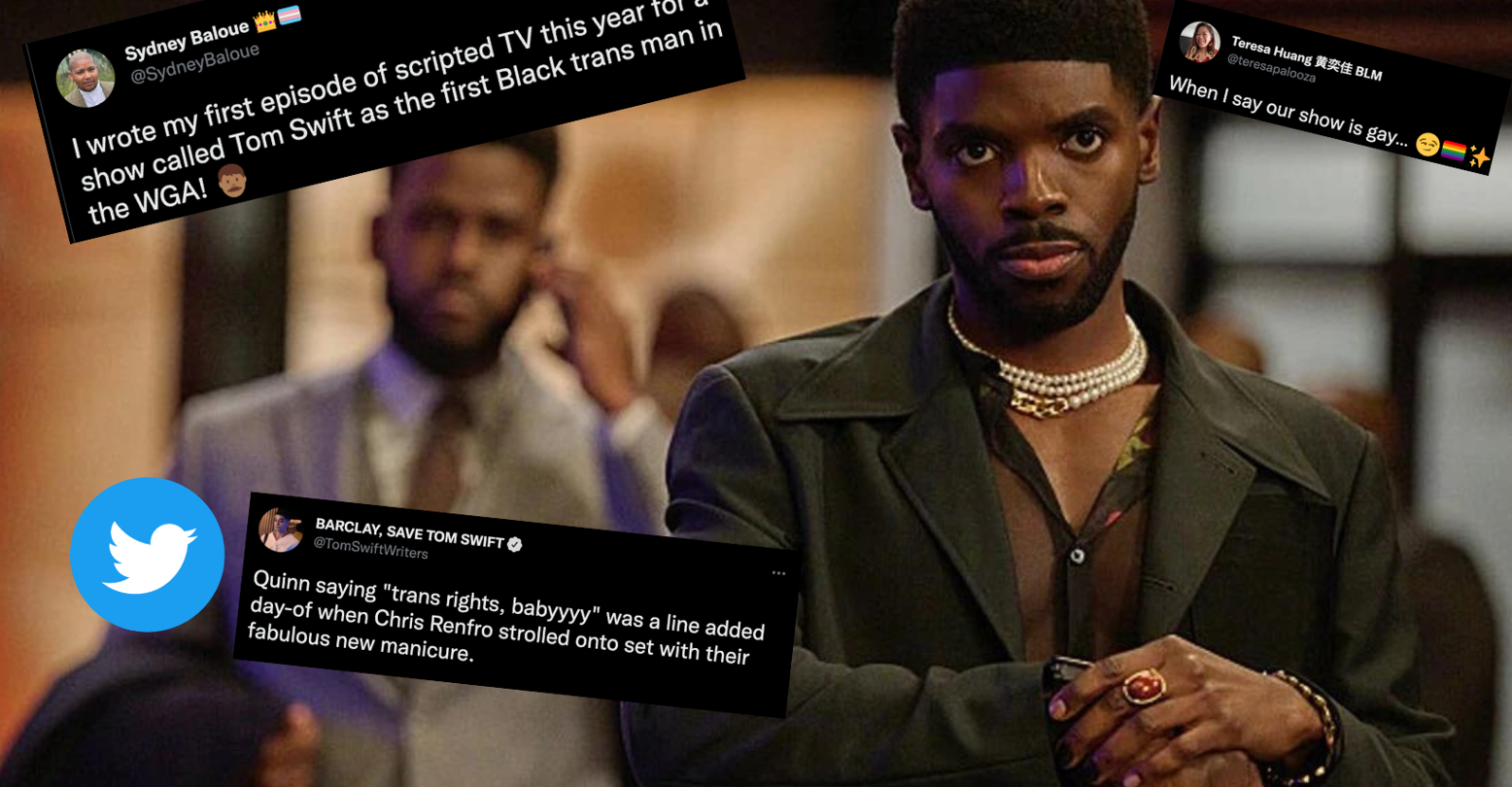 Tom Swift is super queer, super Black, and super entertaining: much of the joy in watching the CW sci-fi show lies in how unapologetically it is all those things. Not only is Tian Richards absolutely radiant as network TV’s first-ever gay Black lead, but the cast and writers’ room is diverse, inclusive, and outspoken about queer people of color taking up space.

The premise of the CW’s “Nancy Drew” spinoff series goes like this: Tom Swift is a brilliant inventor, and a billionaire (which means he’s sometimes problematically arrogant, but he’s doing it in Dior with a killer smile.) He also gets to have steamy gay make-out scenes with other Black men —on a network show! The show’s cast includes Tom’s gorgeous, gentle giant bodyguard Isaac (a casually trans, wonderfully pansexual character played by trans actor Marquise Vilsón), Kenyan actor Albert Mwangi playing a baddie with a dangling earring who can’t stop saving Tom’s life even though he works for the enemy, and thee one and only LeVar Burton voicing Tom’s AI personal assistant, Barclay.

Through this wild ride of a show, we get to experience a Black cotillion, meet Black cowboys, and take spontaneous trips on the Swift Enterprises private jet. There’s rich people drama, warm found-family vibes, and fits so expensive you’d lose track counting the sheer force and variety of fire lewks every episode. Costume Designer Ayanna James Kimani even shared that in the first episode alone, Tom wears almost $100k worth of designer labels.

One of the most fantastic aspects of loving the show is getting to follow the Tom Swift writers’ room Twitter account. The team, who according to their bio “write it for the girls, gays, and theys”, do a divine job of bringing the thirsty, feisty, fashionista energy of Tom Swift —the character and The CW show— to our timelines. The writer’s room is doing even more than the show’s official account to bring in and rally its true audience: queer Black people who love fun, smart, messy, glamorous drama. They’ve also given us some very memorable gifs, like the time Tom’s bodyguard broke up an office party of hot men in their underwear:

that time when isaac did not say gay rights pic.twitter.com/H5rVfRxLUs

That hilarious line was a Marquise Vilsón ad-lib, and so was this next one. If you’re wondering just how much shirtlessness you’ll see… the answer is all of it, all the time.

The account gives us insight into the true heart behind the show by introducing us to its queer writers of color; “Tom Swift” is the first time many of these writers have been given the opportunity to see their work on TV. With every behind-the-scenes story, we learn about the journey to creating this show, and we can’t help but root for the many talents behind it.

I wrote my first episode of scripted TV this year for a show called Tom Swift as the first Black trans man in the WGA! 👨🏾
.
It airs tonight 9/8c on @thecw! Watch as Tom wrangles with Black cowboys… 🤠
.
Co-written with Teresa Huang & directed by Clara Aranovich. Giddy up! 🐎📺 pic.twitter.com/AgK01dcoNw

“Fun Fact: The Nelly “Hot in Here” joke cost a good chunk of change. That’s when shit got real for me. I was like ‘People are spending money on my joke.’ Let’s hope the power doesn’t go to my head…” –@KMaskFilms pic.twitter.com/Ya5QCBkfPy

Like, how can we not love this for them?

“I still haven’t processed that an episode I helped write
will be on national television. Not sure if I ever will? That’s something I’m still working on in therapy lol” –@elliofeliciano

“It was a blast to be able to center an episode on our trans character. As a writer who is also trans, it was important that we wrote Isaac as authentic as possible, to stay away from the trans tropes we often see all too often.” –@elliofeliciano

One of the best behind-the-scenes insights is the moment nonbinary office icon Quinn (played charmingly by nonbinary actor Chris Renfro) arrived on set with trans rights nail art while they were filming an episode that would air on Nonbinary Awareness Day. Naturally, they wrote it into the script.

obviously we had to highlight their nails, especially since we knew this episode would air during Non-Binary Awareness Week! pic.twitter.com/7oCQzsoyT9

It’s also incredibly sexy, literally non-stop. Somehow Tom is saving his company, rescuing his dad from space, and gettin’ down with some of the finest men on the planet.

THIS IS JUST THE FIRST OF MANY TIMES WE SEE TOM HOOK UP! Justin (Hayward Leach) is the man Tom’s mother set him up with. He seductively invites Tom to straddle his motorcycle with the words “Come here, tech daddy”, and then they have sweaty, champagne-covered motorcycle sex. Again: on network TV!!!!

Everything about the show is also deeply queer: especially Tom’s complicated relationship with his father, who has made it very clear that Tom’s focus on the flirty and fun does not a Swift Enterprises CEO make. Tom takes that personally. Yet while Tom is struggling with a lifelong sense of rejection, he’s also been hailed as the company’s greatest inventor, and his dad trusted Tom enough to use his technology to travel to Saturn. Except oop! the mission does not go as planned and now his dad is stuck in space with assassins trying to kill him.

First, Tom blames himself and begins to believe that maybe his dad was right to doubt him. Then, the show truly begins as we learn that his dad did trust him —enough to send secret messages from space that only Tom can decode, because there is a murderous Illuminati-like group actively working to end their company.

As the season progresses, we watch Tom wrestle with the emotional news that his dad may have accepted him all along. He takes this information and starts to convince others that he genuinely should be running this company, all while fighting desperately to save his father’s life.

OKAY SO: watch the show. Tweet about it. Live tweet about it. Stream it, and perhaps it’ll find a new home! No matter what, we bring this season to a satisfying and SHOCKING Conclusion that I know you’ll all enjoy. Some of our best episodes are ahead of us. #TomSwift https://t.co/VXpovT8vOx

Unfortunately, after airing just six episodes, during the avalanche of cancellations when The CW was acquired for a hilarious-if-it-wasn’t-so-tragic $0, The CW announced it would not renew the show.

But there is still hope. Firstly, because they’re going to air the remaining episodes and we can tune in every week and on the app to support it (and tbh, to see allll the outfits). There’s also hope for us because the writers still have hope. Since the cancellation, their Twitter rebranded as a “Save Tom Swift” account that also live-tweets the episodes as they air. According to Deadline, CBS Studios is trying to shop the show around to other networks while The CW’s new owner moves towards a more (cue up your eyerolls and disgusted faces) “wholesome” slate of shows for their future.

The writers’ room Twitter is doing its part to shop the show, too: One of its most iconic moves is simply tweeting at every other network and streaming service asking them to “pick me up daddy” and “pick me up mommy” respectively.

@PrimeVideo pick me up daddy

A new episode of #TomSwift airs tonight at 9/8c! Stream tomorrow free only on The CW. pic.twitter.com/Anif5tWXXs

Watch Tom Swift Tuesdays 9/8c on The CW, and stream it free on The CW’s website after.♦