Celine Dion is the new queen of serving looks and that’s the way it is.

If you haven’t noticed, Canadian chanteuse Celine Dion has been slaying the fashion game as of late. The queen of schmaltz, whose pop ballads reigned on music charts in the 1990s and 2000s,is now a full-fledged glamazon fashion icon in 2012 that has left us asking, “Backwards tuxedo who?”

Her status as 2017’s most fashionable diva was cemented with a photo shoot and accompanying video in Vogue that saw the woman behind “The Power of Love” masquerading in ultra-glam costumes and outfits that would draw the envy of Marie Antoinette. The internet was shook. 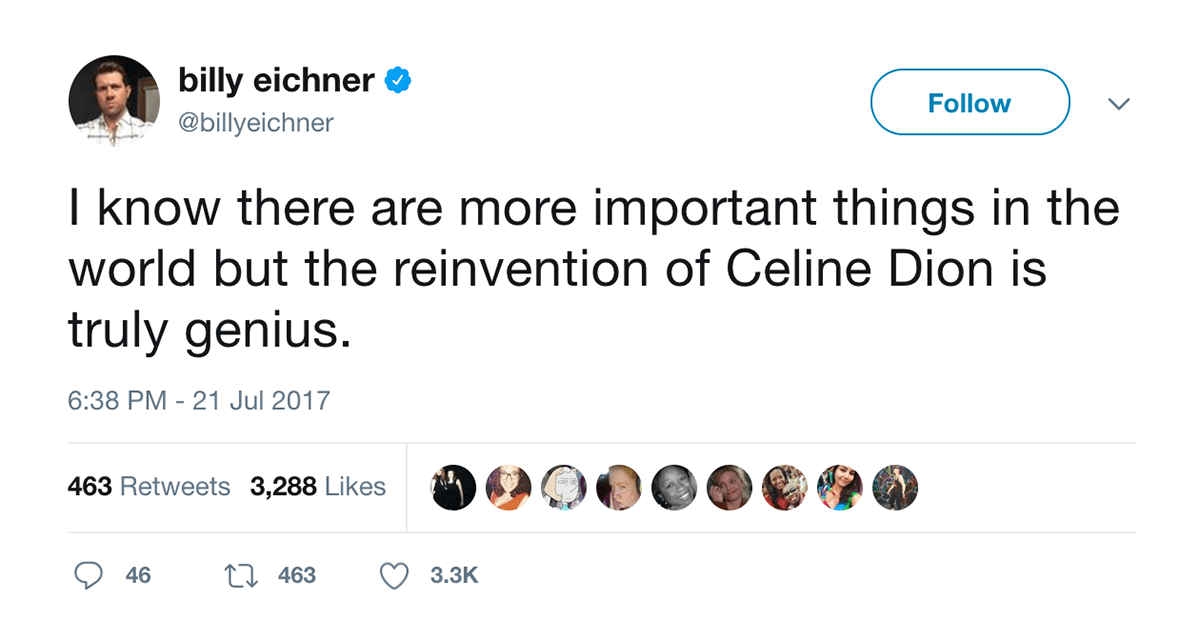 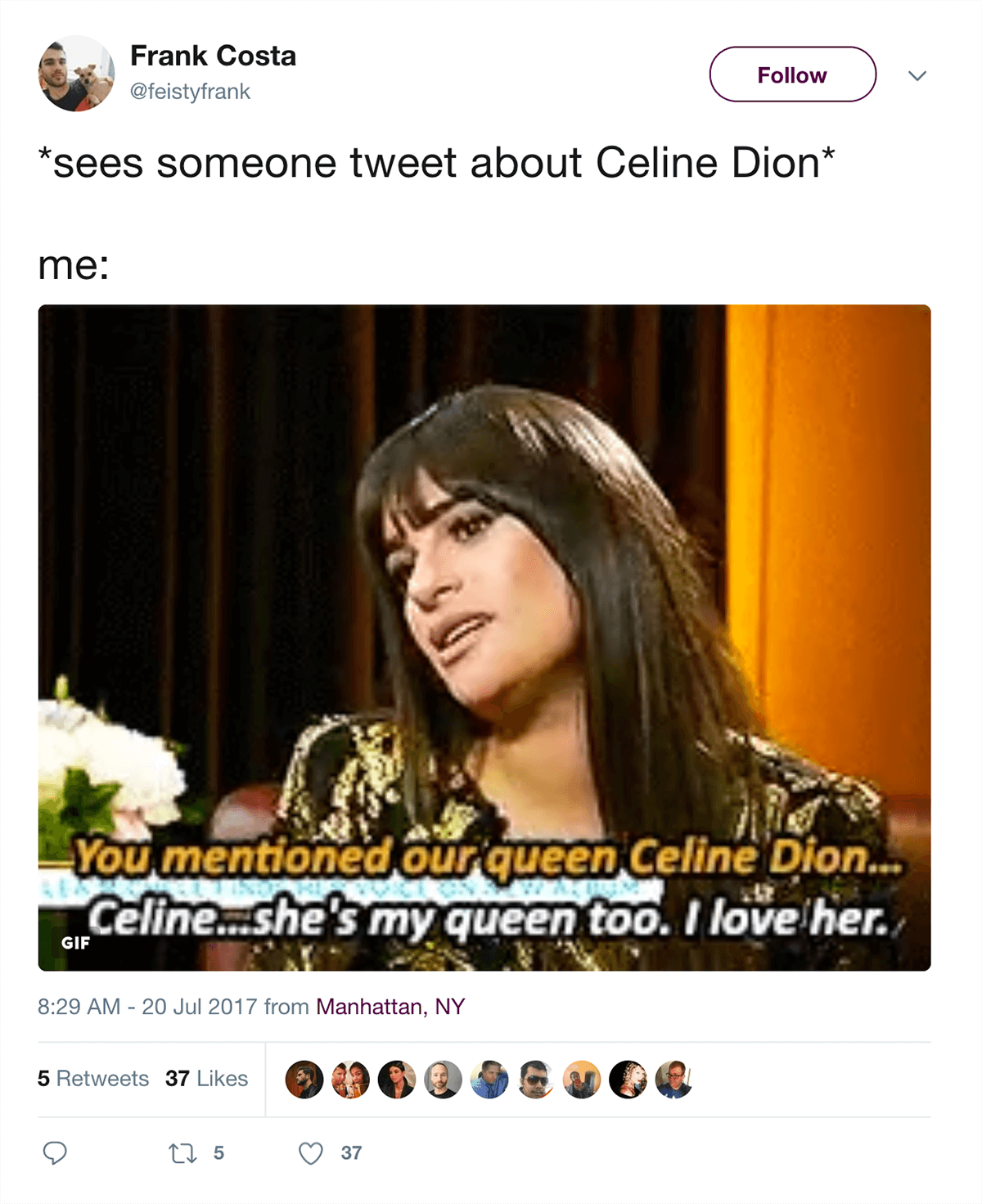 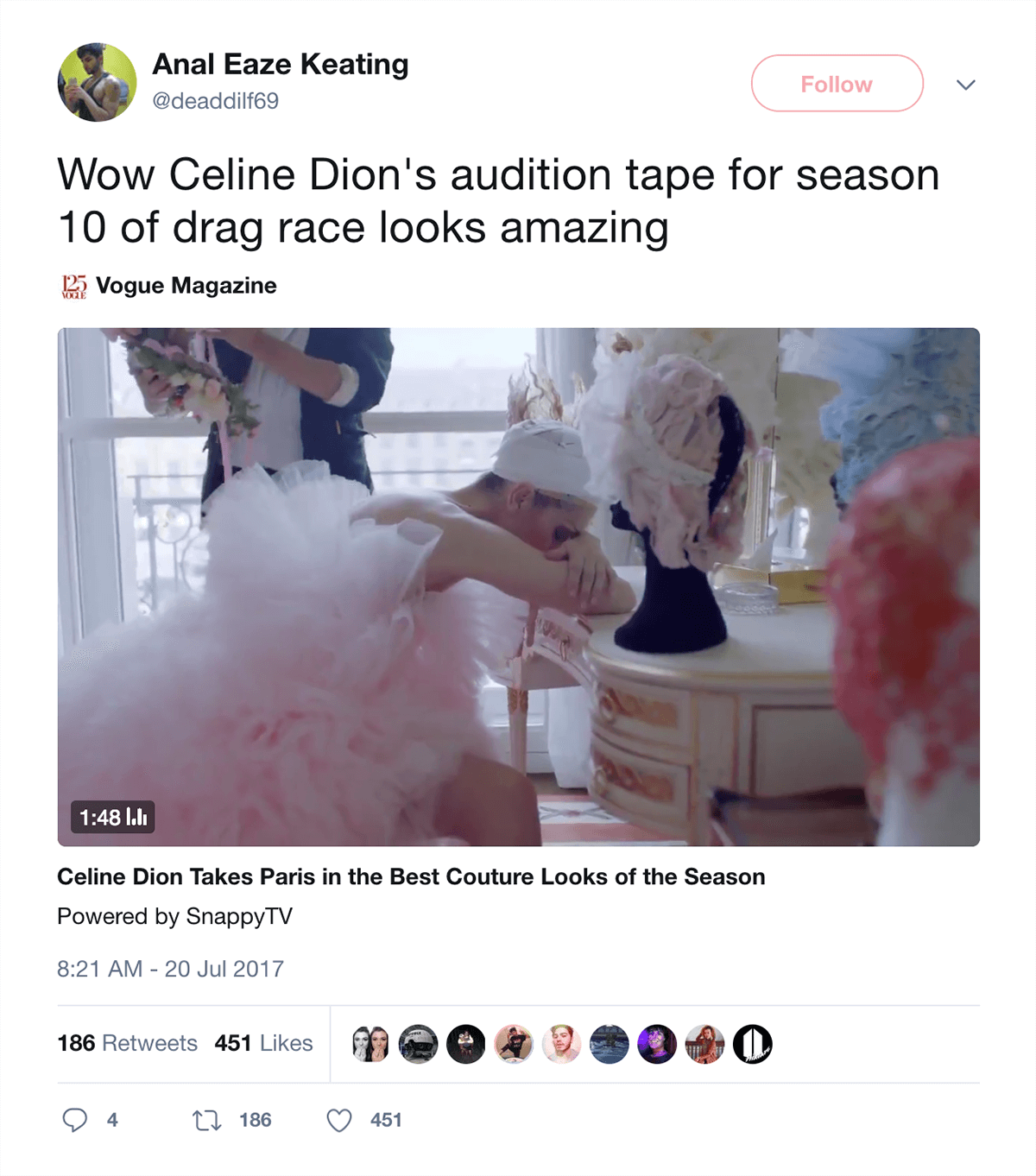 Dion’s slayage didn’t start with the billowing Versace dress she wore to her very first Met Gala but it is when a lot of people took notice. Later that night, she single-handedly reinvigorated New York’s cart food economy and put ANTM’s hot dog photo shoot to shame when she wolfed down a New York City dirty water hot dog while in said Versace dress. She shared a snap of the historic culinary moment on Instagram. 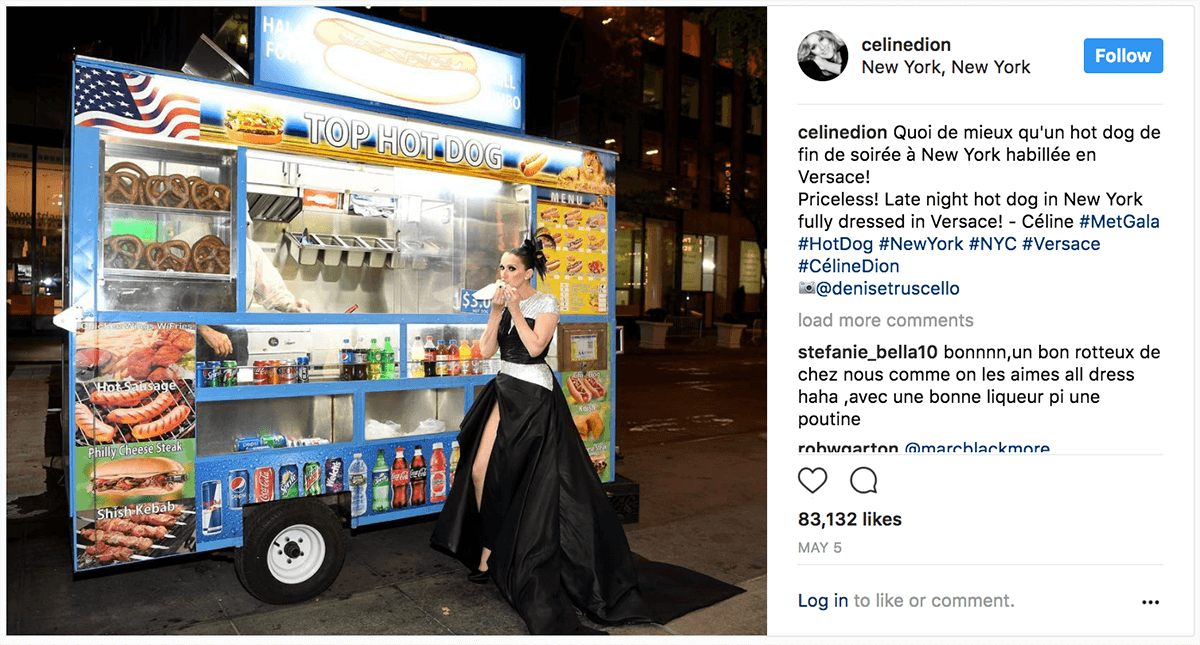 Later in May, Dion appeared at the Billboard Music Awards to sing the a little song called “My Heart Will Go On.” To honor the songs 20th anniversary, Dion donned an outfit just as dramatic as the song’s rousing chorus and flute solo. The pouffy-armed white and gold dress was, like the Versace, chosen for her by her stylist, Law Roach, who styles Spider-Man: Homecoming star Zendaya and currently holds a judging spot on the ANTM bench.

Since then, Dion has shown off a range of looks on her own Instagram, each time crediting Roach for her superb style.

There’s this high-fashion monk/nun combo that would make anyone convert to Celine-ism. 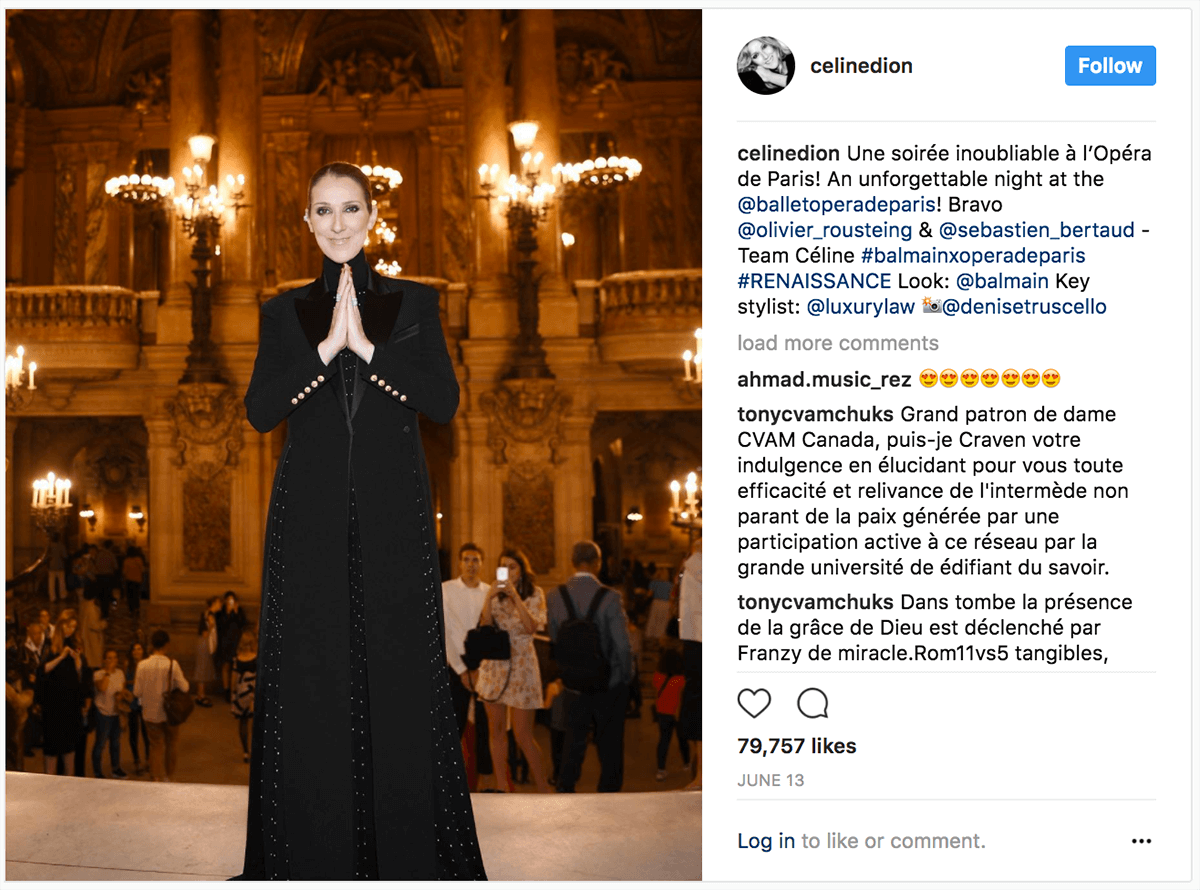 And this floral pantsuit that Hillary Clinton wishes she could rock. 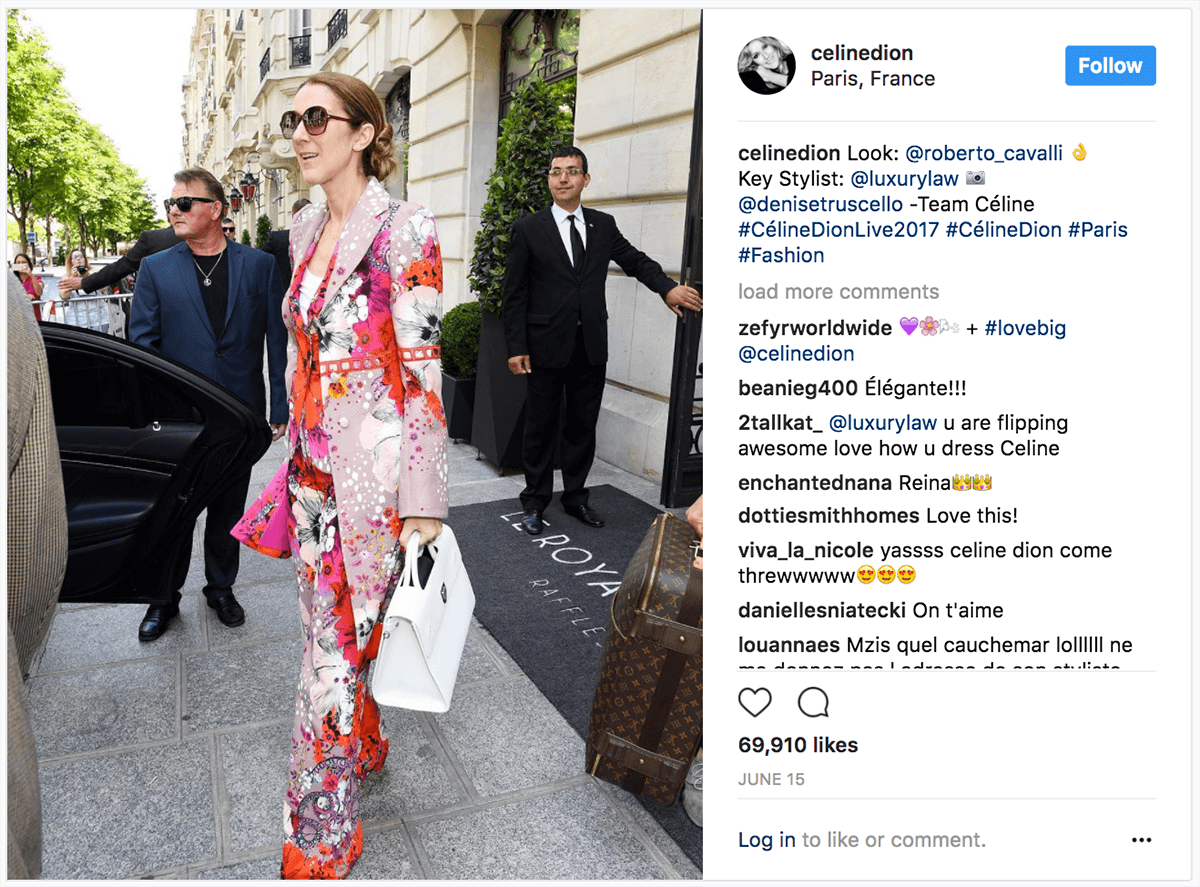 And the time she played tribute to George Michael, Prince, Michael Jackson and David Bowie in a cute top. 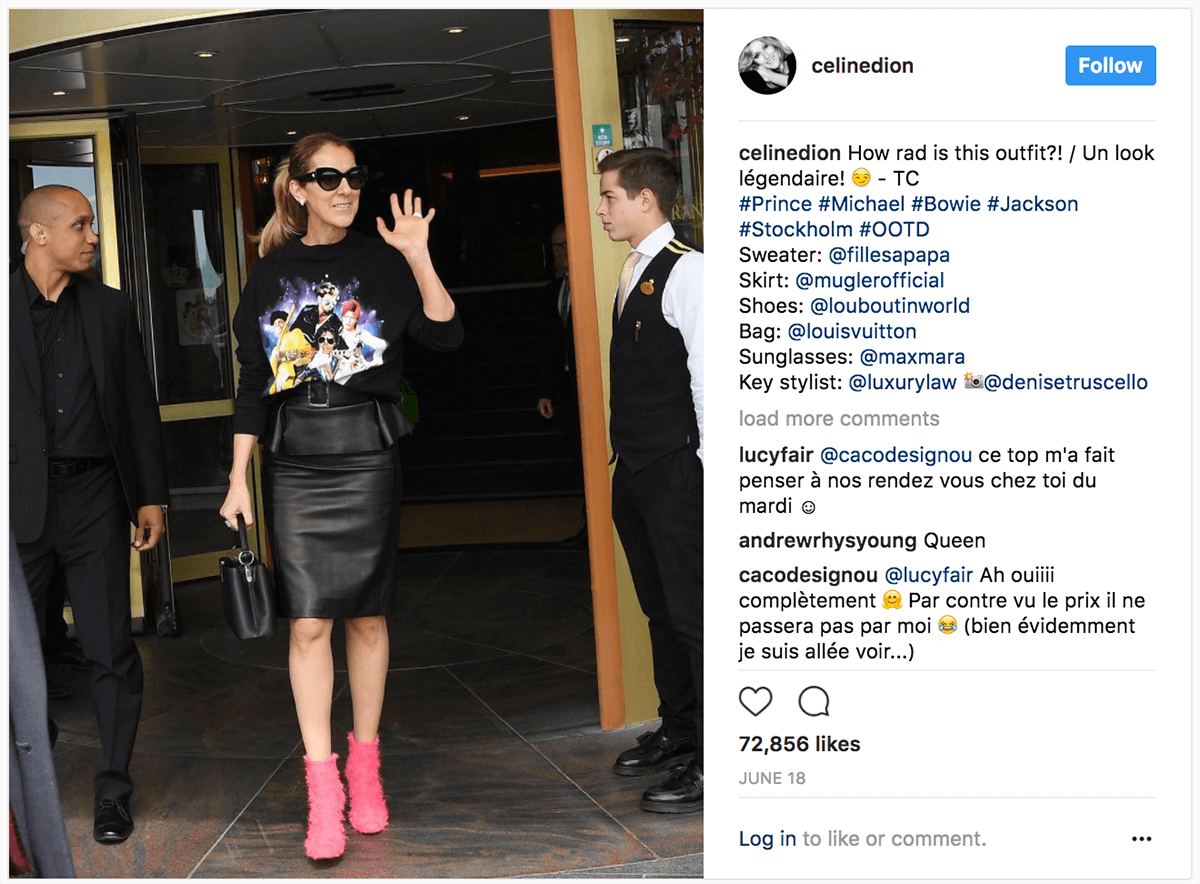 Dion’s gag worthy looks are about more than just what’s draped over her body. In May 2016, Dion lost her husband, 73, and her brother, 59, to cancer in the span of only two days. Since then, she’s given emotional, teary performances and gone on the interview circuit to talk about moving on since his death. But while those were words, Dion’s wardrobe shows symbolically that she’s at peace and ready to be noticed by the public again.

Not only is Dion’s fashion fun, her attitude in her clothing is more fun than ever. Those who have fallen down YouTube holes of Celine Dion videos know that she is eccentric and fun-loving, even if that’s not always the image she projects. But, as she waves to onlookers in Paris and pops her foot up so that her stylist can finish her outfit, Dion has invited each of us into the fun of her life. But rather than inducing some kind of Instagram envy, people just seem to be happy for her. Will-wishers and messages of congratulations fill her Instagram comments. 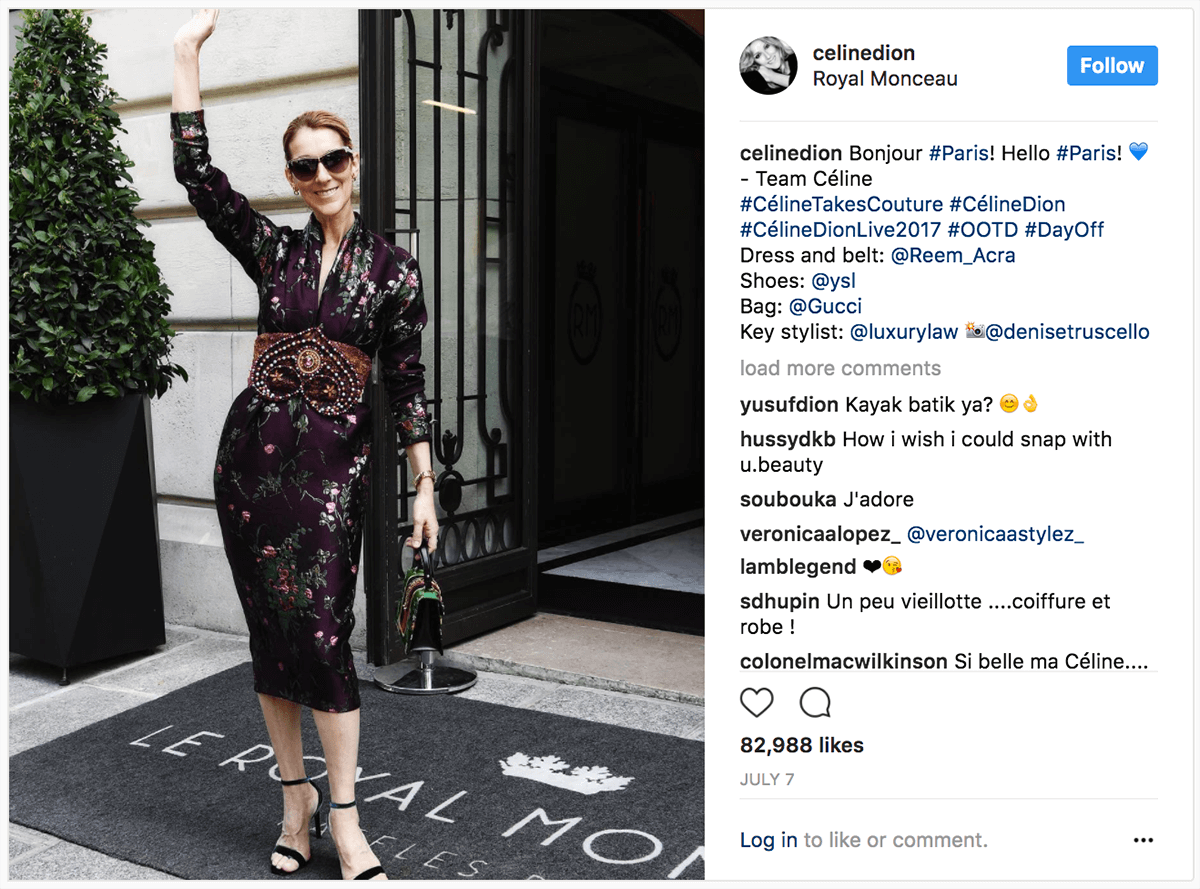 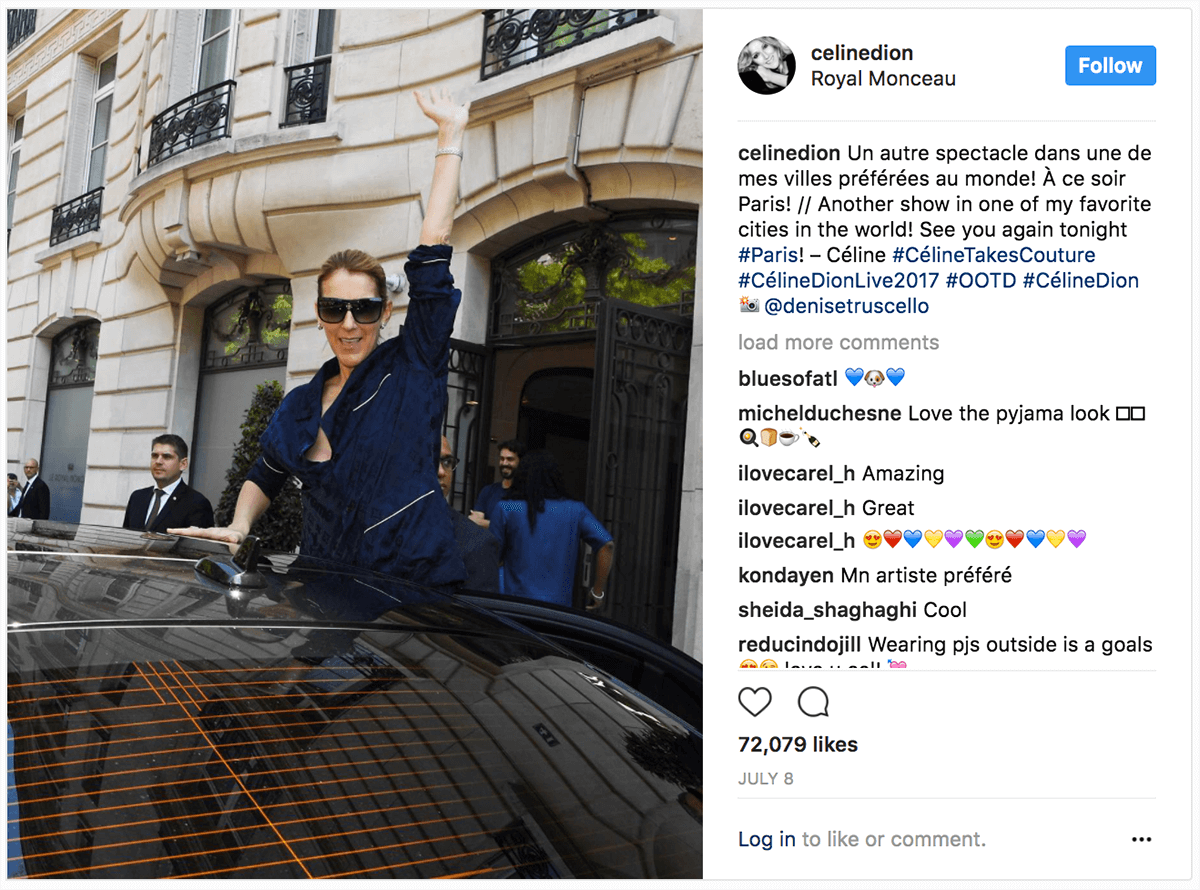 And while her music has always been serious and dramatic, her newfound fashion sense is fun and light. Dion’s wardrobe works not only because it’s creative, but because it’s surprising and makes the public rethink her image. Usually reserving theatrics for her music, Dion’s flare for the dramatic has leaked into her looks like her “just another day at the office” cape or her goldenrod Dior couture.

People have noticed that Dion’s fashion has taken no prisoners. 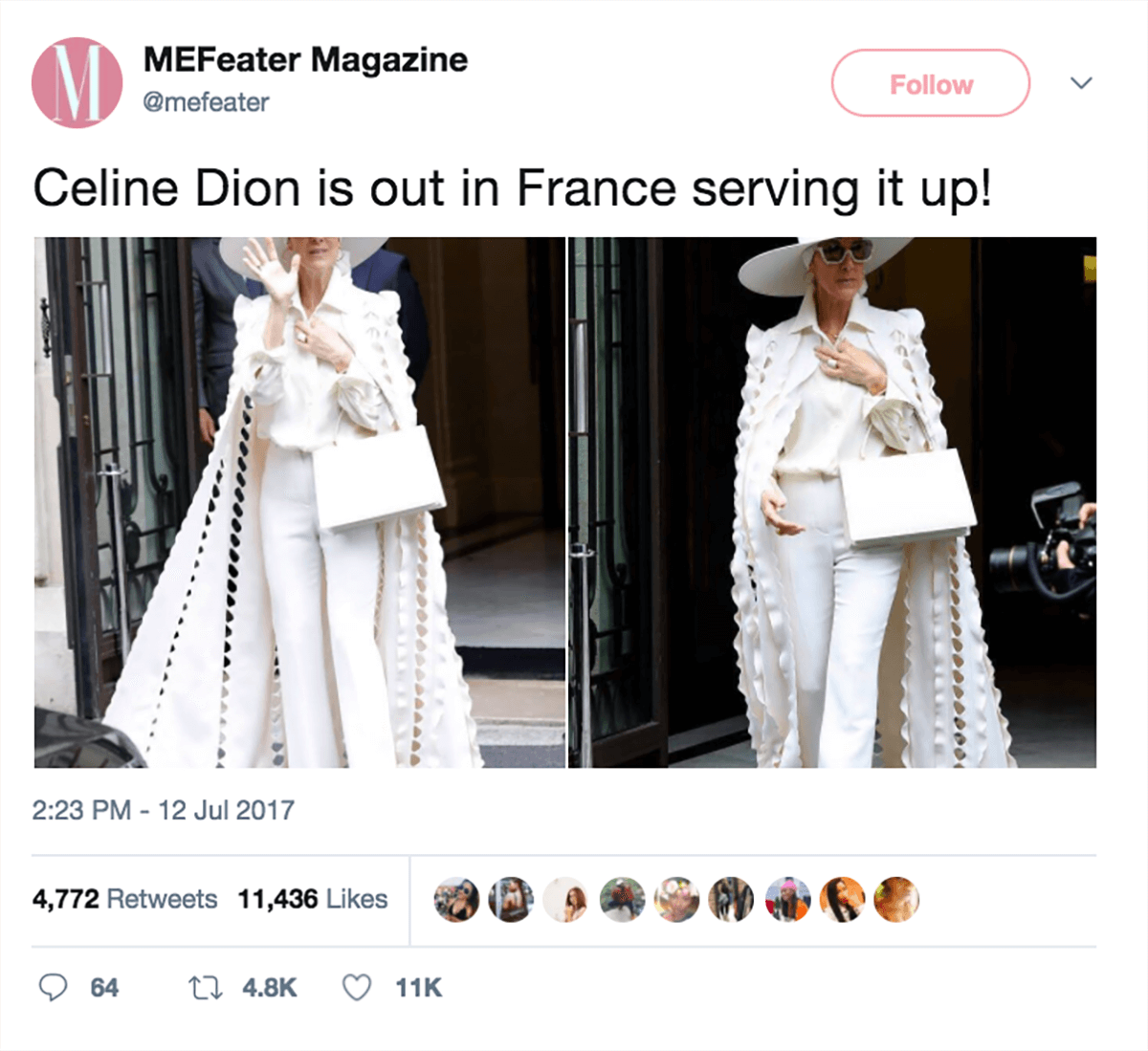 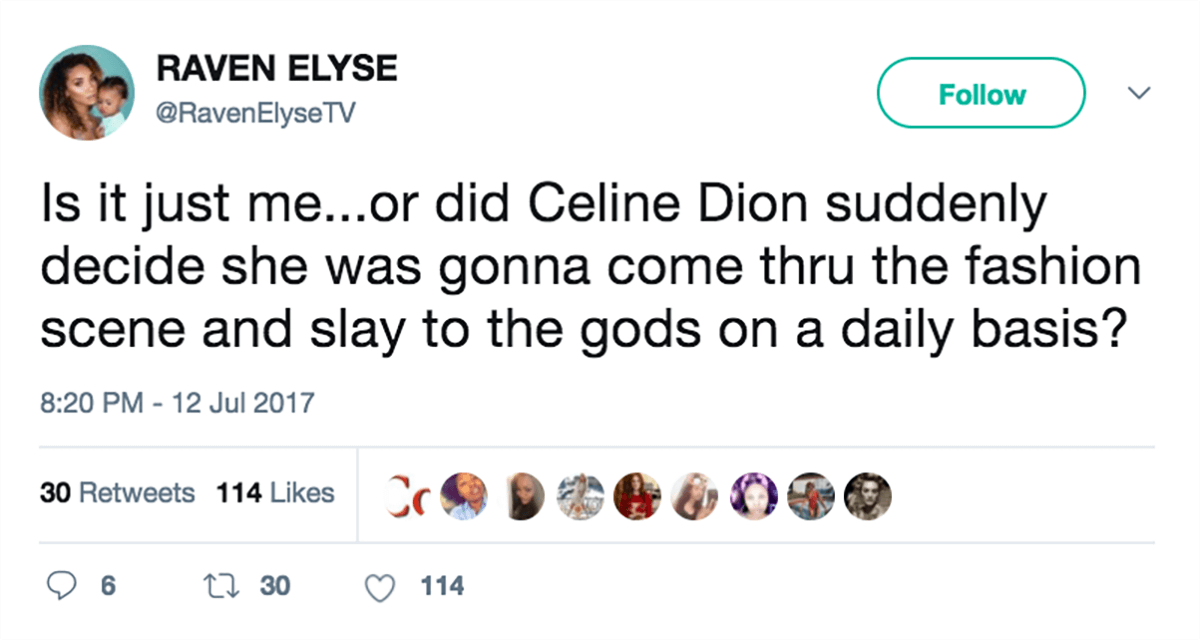 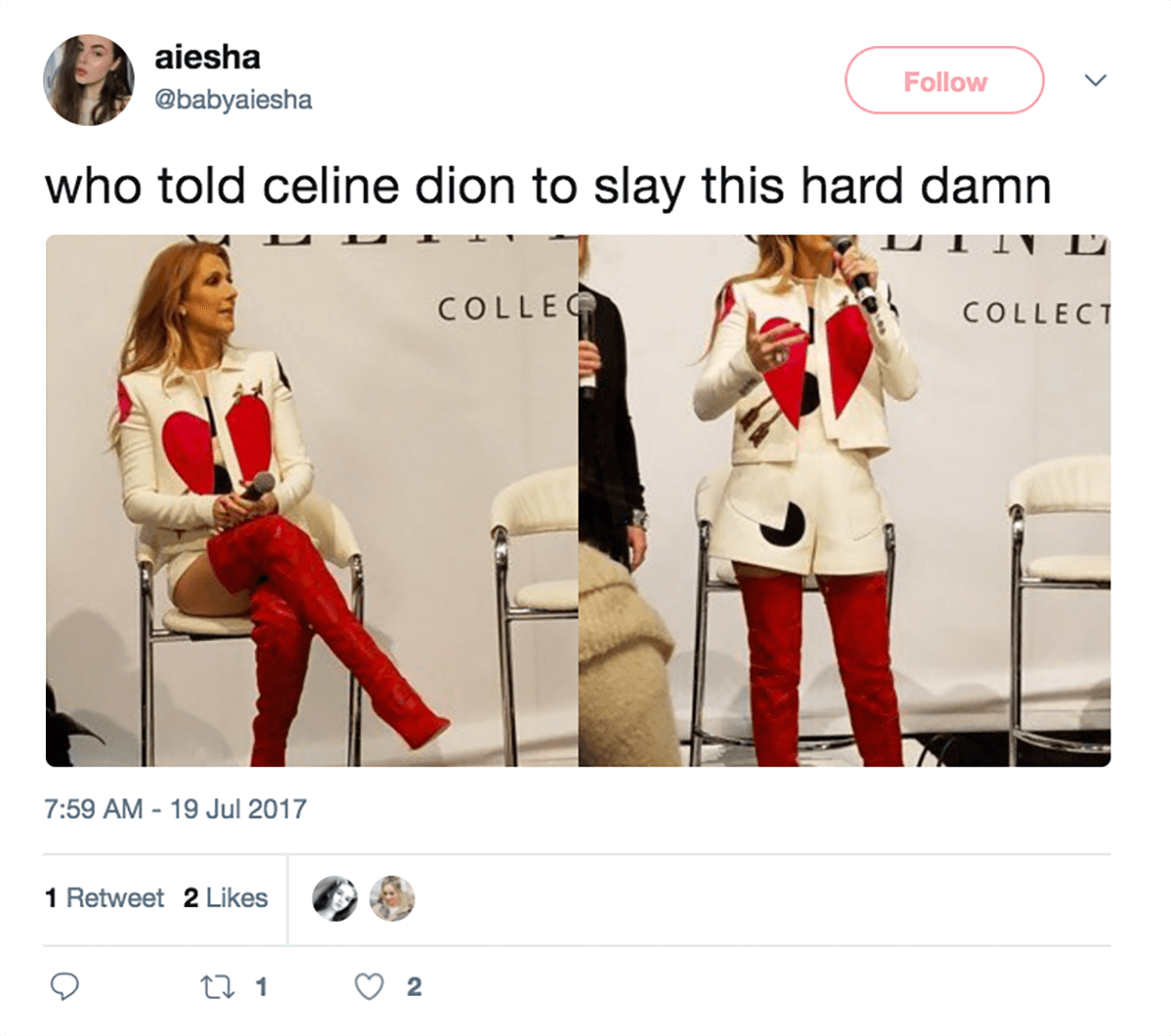 Dion has emerged triumphant out of one of the most harrowing periods of her life and she has taken all of our wigs with her. She’s the underdog fashionista we didn’t know we needed. She’s a paragon of embracing life after death. She turns heads and does nude photo shoots at 49 years old. In or out of clothes, Dion has earned a new trophy on her mantle: style icon. We are truly living in the #Dionaissance.