The Bachelor. The Bachelorette. Love Island. Beauty and the Geek. Rock of Love. Flavor of Love. The Cougar. All these reality dating shows have many things in common, but an overarching, unavoidable theme is their focus on heterosexual relationships.

The highly problematic reality series A Shot at Love with Tila Tequila was 10 years ago now, and since then, there has been little visibility for queer people on dating shows. In 2016, gay men had Logo’s Finding Prince Charming, and the UK’s First Date has featured some LGBTQ cast members. But it’s only recently there has been an embracement of bisexual-identified people on television. Desiree Akhavan’s series The Bisexual recently premiered to praise from the LGBTQ community for its accurate portrayal of a woman exploring her bisexuality, all the while battling and dismantling the stereotypes associated with her sexuality. But that was fictional — where was our dating show?

E!’s The Bi Life, hosted by Australian drag queen, pop singer, entertainer, and Celebrity Big Brother winner Courtney Act. The show, which premiered late October, followed nine bisexual-identified millennials as they summered at a villa in Barcelona, getting to know each other and sharing their bisexual experiences.

This isn’t a Big Brother or Survivor sort of show with challenges, alliances, and backstabbing to get ahead. There’s no competing for the heart of another with the result being kicked off or engaged a la The Bachelor, either. Think of The Bi Life as if you were hanging out with a bunch of friends, but it’s televised You’re observing their summer getaway as they discover one another and parts of themselves. Courtney Act advises the cast members on being an out and proud, offering advice and listening to their concerns. She plays part host, part guidance counselor.

“I couldn’t think of a single bisexual role model growing up, and so to have that now, to be able to see real people having real problems and most importantly talking about bisexuality is so important,” The Bi Life cast member Irene Ellis told INTO. 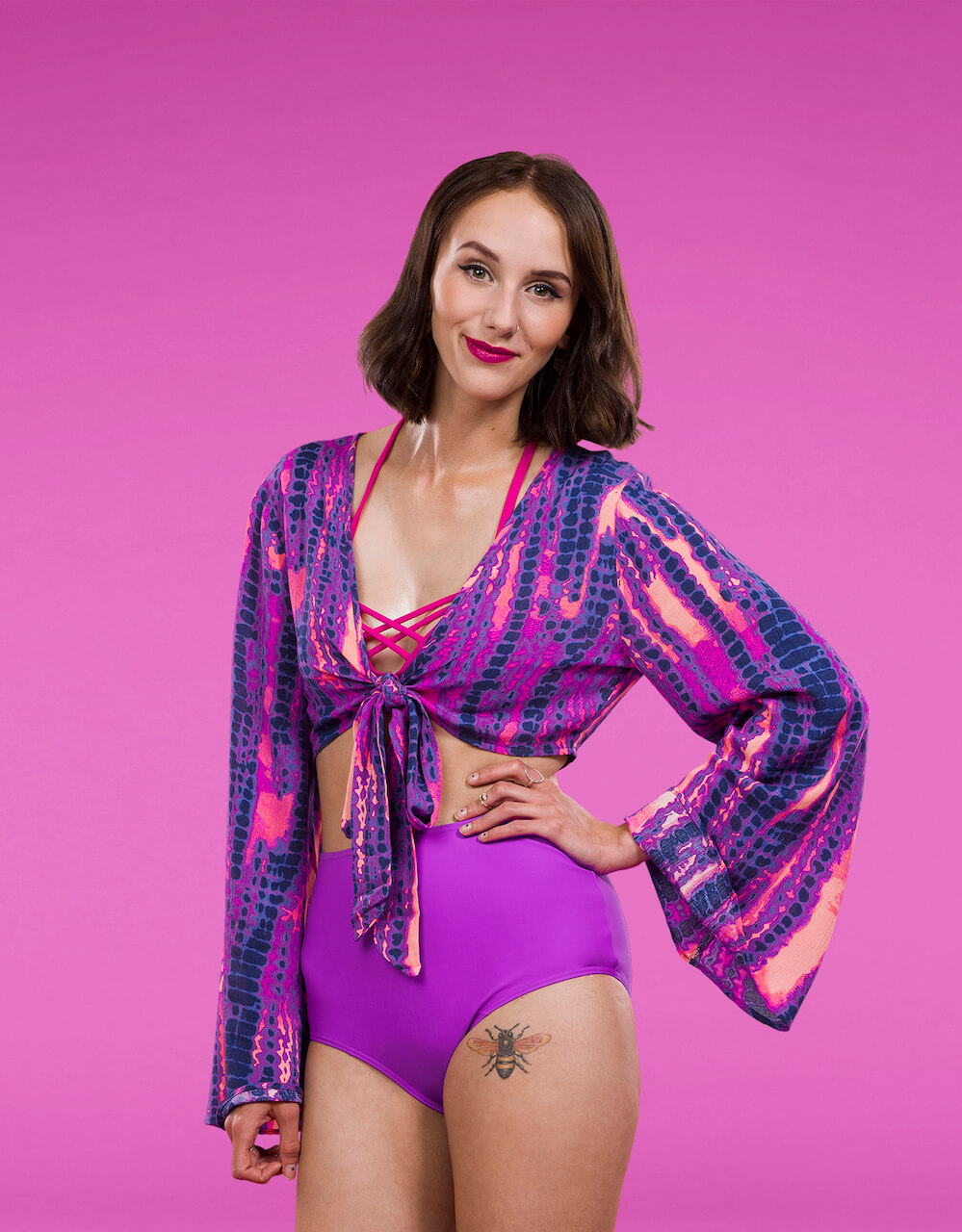 Ellis, who identifies as pansexual and hails from Chichester, England, says she applied to be on the show after seeing an ad — a pure act of spontaneity.

“Seeing that there was going to be an LGBT show on TV, I just kinda felt drawn to it,” Ellis said. “I thought ‘You know what? My dating life is also getting a bit stale — maybe a TV show can help me find someone.’ And deep down, I still had that nagging feeling that I wasn’t being as open and as confident as I wanted to be with my sexuality, so maybe this might help that.”

An introvert and self-professed nerd by nature, Ellis was nervous heading into the house, but says her fears were quickly abated when she met her castmates. The cast is as wide and varied as bisexuality is. There’s Daisie, a fraud prevention officer from Manchester; Kyle, a support teacher from South Wales; club promoter Leonnie; an international swimmer named Michael; and London-based makeup artist, Mariella.

“I felt like I knew them all immediately, and we all just wanted to talk and learn about one another,” Ellis said. “One of my favourite things was that we all had breakfast together, often Matt … or Mariella would cook and we’d sit at the table chatting. And between filming, we’d be seen trying to catch up on telly together — often cuddled up on the big sofa inside.”

It was a big happy bisexual family, a positive and relatable space. Ellis said she felt comfortable being herself, explaining her love of cosplay to a very bewildered, but ultimately fascinated Matt. She also showed off her bee tattoo — an ode to her love of Sherlock Holmes to Ryan, a fitness influencer from London.

“Everyone just completely accepted me for who I was,” Ellis said.

As much as a bisexual Barcelona abode may have seemed like a dream vacation, they were all there for a specific reason.

“We would often have conversations in the villa about what might happen after we finished filming, and what people might say,” Ellis said. “However, we all said that the one thing we wanted was to have a mainstream show out there that just normalized being bisexual/pan. We considered that if we could make even one person feel like less of a stereotype, feel less like they had to justify themselves, then that would be one of the most important things we’d done.”

Judging by the immediate and ongoing reactions to the show, they’ve done their job.

One viewer, @Little_Ms_Wise, tweeted, “I’m really excited about #TheBiLife reality series on @e_entertainment it seems like it’s opening a lot of eyes and outing a lot of stereotypes about the #LGBTQ population.”

While there are the inevitable negative comments, they’re not in the majority. Ellis says that most people are “really just excited to see bisexual/pansexual people on their screens.”

“A lot of people messaged us and asked how we’d come out, and to thank us for being the guinea pigs, as it were, to go out and be the first faces of a show of this kind,” she said.

Her favorite reaction came from an Instagram DM she received from a viewer. “She let me know that watching The Bi Life with her parents made it a lot easier for her to explain her sexuality,” Ellis said.

Still, there’s’ room for improvement: Ellis is the only pansexual-identified person on The Bi Life, and the show has faced criticism for every castmate identifying as cisgender.  Those additions would only add more benefits to a show disseminating information about bisexuality that is ultimately helping to normalize it. There is a concerted effort to break down “the complexities” of being bisexual, moreover, the fact it’s not complex at all. Viewers are watching a television show about people who are sexually attracted to people of all gender identities. The conversations the cast mates have with one another both break down the barrier and inform the viewers, as conversations range from coming out of the closet to being told their sexuality wasn’t as important as a gay woman’s, the latter having been an early experience for Ellis.

“Bisexuality is completely valid,” Ellis said.  “You’re not sat on a fence, you’re not undecided, and you’re certainly not greedy. You just like both, and that’s perfectly okay. You can define to what percentage or level or whatever that is, but that’s yours to own.” 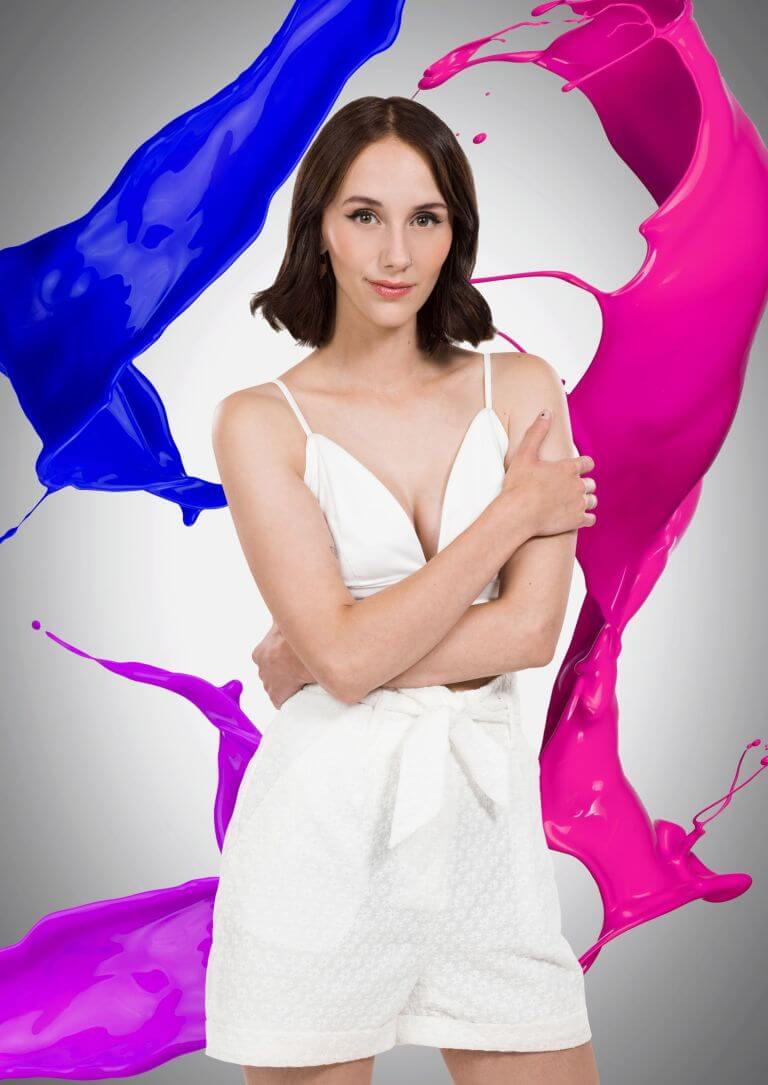 The Bi Life has helped Ellis to become more confident in herself and how she identifies, as dealing with bisexual erasure was something she’s struggled with. Even at Pride, she felt like she didn’t belong, with people telling her she was only there for the party; that she wasn’t “gay” enough. She said she was closeted in school because she saw how her bisexual classmates were called greedy or manipulative, people saying they didn’t know which side they were playing for. It stuck with her for years.

“It’s only really since being on the show and finally talking about those experiences and those discriminations that I now feel proud to be who I am, and no one else can shame that,” Ellis said.

While The Bi Life has had an important impact on LGBTQ viewers, it’s also a show heterosexual viewers can enjoy and learn from.

“By watching the show and being a little more educated about LGBTQ+ issues, you’re going to become an ally that someone you know might really need,” Ellis said of straight viewers. The more people hear about the show and watch it, that’s “. . . one more person in your life that understands you and doesn’t judge you, [it] can make the world of difference,” she added.

“I certainly would have felt a lot more comfortable coming out at a younger age,” Ellis said. “Even if just to say yeah, well, I’m not weird, there’s a whole TV show about people like me!”

The Bi Life airs Thursdays at 9pm on E! UK & Ireland and is also available on heyu.