It’s been 126 years since Andrew and Abby Borden were found murdered in their Fall River, Massachusetts home, with their 32-year-old daughter (and stepdaughter, respectively) becoming the prime suspect. Lizzie Borden, an unwed housebound loner, was suddenly thrust into the spotlight, defending herself against the accusations that she wielded a hatchet and violently brought it down on the heads of her father and step-mother. Even though she was never convicted of the crime, the lore of Lizzie Borden has spawned not just stories and songs but true crime books, a Lifetime TV movie and then follow-up series, a musical, and a bed and breakfast/museum, all named in her (dis?) honor. Now, a film starring two of modern cinema’s revered rebel icons – Chloë Sevigny and Kristen Stewart – delves into an aspect often left out of retellings of the bloody saga: Lizzie Borden’s alleged lesbianism.

Historians have attempted to discern whether Lizzie Borden’s love of female friends and eschewing of male partners meant anything in particular about her sexual identity (some, opting out, instead call her a spinster), but there’s not a ton of proof either way. Still, some believe Lizzie’s friendship with performer Nance O’Neil was a romantic one, and that Lizzie also had a relationship with Bridget “Maggie” Sullivan, her family’s 25-year-old Irish maid.

In Lizzie, hitting theaters this Friday, Sevigny plays the titular character as a repressed, buttoned-up young woman imprisoned in a boring day-to-day as dictated by her overbearing and judgmental father (Jamey Sheridan). Stewart is Bridget, quiet and dutiful out of monetary necessity, even when she’s expected to perform sexual acts outside of her job description for Mr. Borden. As Lizzie and Bridget discover each other’s shared hatred of their suffocating situations, they find a bond that evolves into emotional and physical affection, leading to the ultimate climax: the bludgeoning Lizzie Borden is infamous for, whether she’s guilty or not. 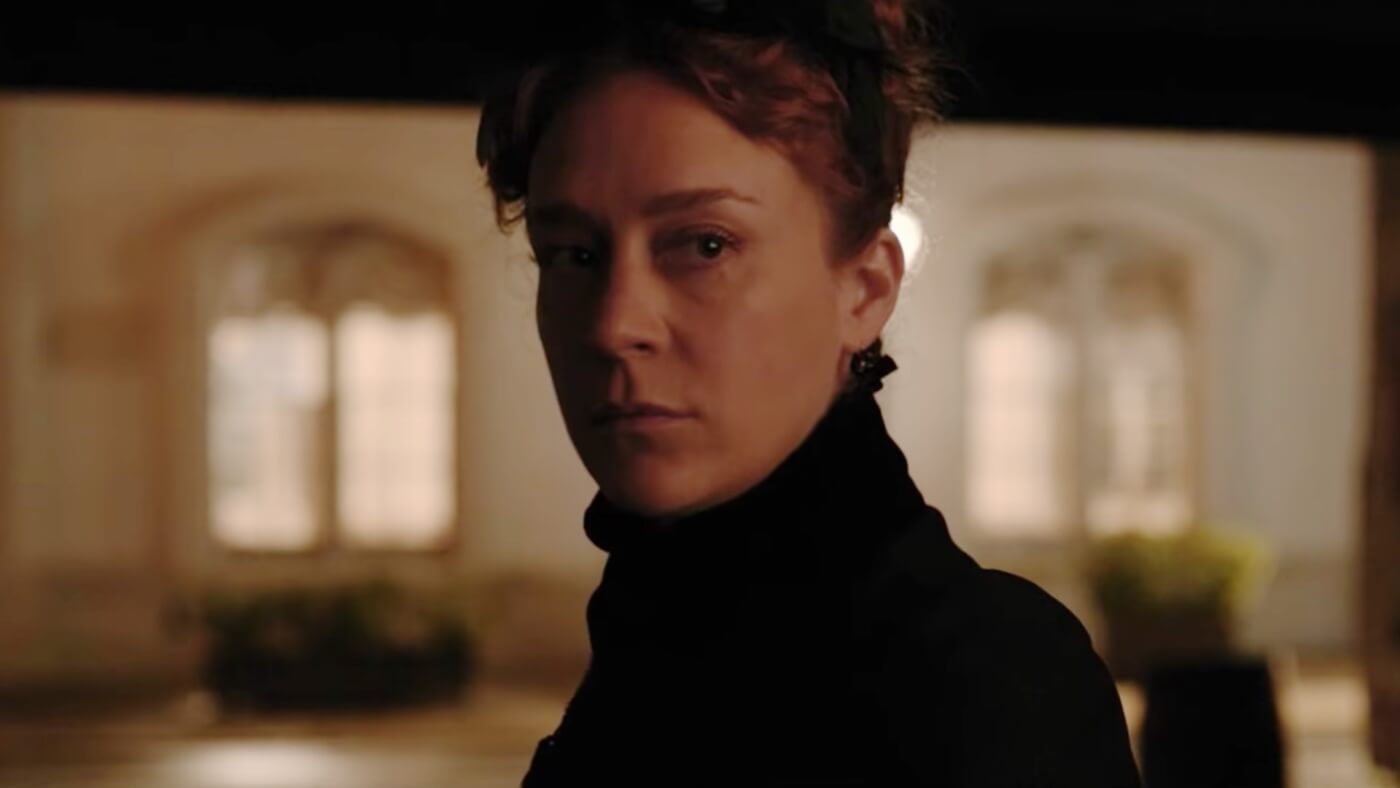 “It’s them finding strength through one another, and it’s also a tragic love story,” Sevigny tells INTO. “Lizzie is projecting so much on to Bridget and expecting so much and her expectations are thinking she’s going to find happiness and freedom through this love and in the end, fighting for it actually loses it, and we thought that was a tragic twist.”

Sevigny was the driver of the project and has been for several years as it went through many iterations – first as a television series with HBO that was eventually killed because of Lifetime’s own version starring Christina Ricci. There were directors attached at times (Pieter Van Hees was to helm at one point), but Craig Macneill eventually took on the feature, written by Bryce Kass. Sevigny says she met with women directors as well, but liked Macneill’s previous film, The Boy, and enjoyed “the respect that he had for Kristen and me and the script and for the project.”

“I tried to stick true to the feelings I had when I first read the screenplay,” Macneil tells INTO. “I genuinely cared for these two women who were trapped in this oppressive home under the control of this sadistic man. These two women were merely trying to survive and they found comfort and solace in one another. That connection took the form of an intimacy. And love.”

When Lizzie premiered at Sundance this January, it was one of four high-profile films that centered queer women protagonists, and one of the first to get scooped up for distribution (Saban Films acquired North American rights). The Jury Prize-winning Miseducation of Cameron Post was the only one with a woman writer/director, and it was noticeable that the others (Lizzie, Colette, and Hearts Beat Loud), all directed by men, were scooped up faster and for wider distribution.

“It took two months to distribute this film,” Cameron Post director Desiree Akhavan told INTO in August. “The film could be the same subject matter but directed by a straight, white man and about a boy and be released by Focus, with a wide release around the country. The facts are the facts.”

his is a pervasive and frustrating scenario in modern cinema, and though it’s not as off-putting as it can be in other dramas of this nature, the male gaze is perhaps illustrated best by an actual scene from Lizzie: When Lizzie and Bridget finally become intimate – believing they are finally alone together, undiscoverable in the barn – they are so involved in making love they don’t realize they are being watched through the window by Lizzie’s father, Bridget’s abuser.

“I thought it was important to keep Lizzie and Bridget clothed for the love scene and not overly glamorize it in any way,” Macneil tells INTO. “We shot it handheld with wide lenses, very close to the subjects, which gives you sense that you are participating and sharing the space with them as opposed to observing from afar.” 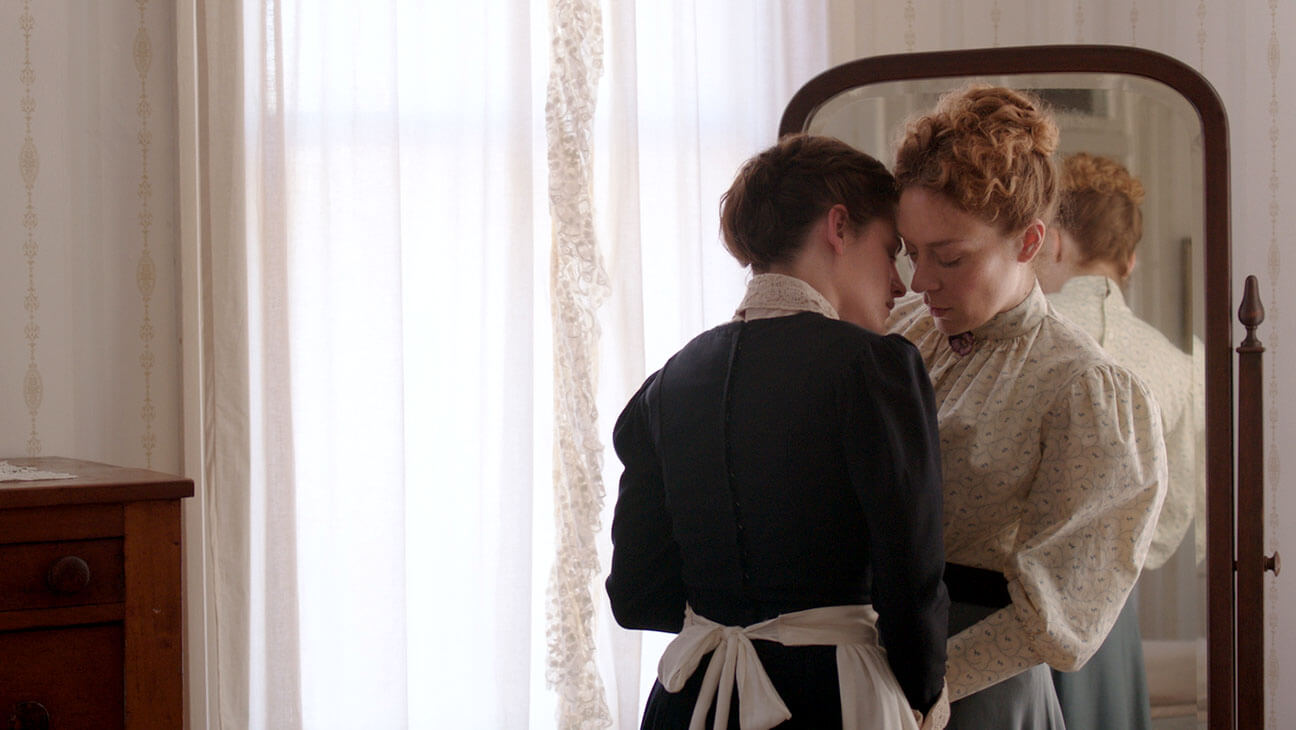 The inescapable repression is palpable in that moment, reiterating that for women like Lizzie and Bridget, there is no way out – they are stuck under the thumb of men unless they do something drastic.

Although reviews out of Sundance were favorable, especially regarding the leads’ performances, Sevigny shared that she was somewhat disappointed with Macneill’s decisions to cut scenes she shared with both Stewart and co-star Fiona Shaw (who played her step-mother). Considering the best scenes are when Sevigny and Stewart have any chance to share a secret conversation or exchange of emotion in an otherwise stoic existence, this was frustrating for Sevigny, who had been trying to get some iteration of the project made since 2010.

“It was very hard,” Sevigny told Huffington Post. “I was like, ‘If you have another scene with Kristen Stewart and you don’t put it in your movie, you’re stupid. What’s your problem?’ But almost every movie goes through that. Almost everything that was on the page was filmed, and a lot of it didn’t make it in the movie. … There was more to the relationships that made them more complicated, and also then informed why Lizzie [commits the murders]. Now it’s a little more vague than what Bryce and I intended originally to do.”

“There were several scenes that didn’t make it into the final cut as a result of the overall running time,” Macneil tells INTO. “It’s always hard to let go of moments and scenes you love, particularly when you remember how thrilling it was to capture on set – but that’s just the nature of post-production. It’s like that on every project.”

Sevigny understands how this works – she’s been in the business for 25 years now, beginning with her first role in Larry Clark’s Kids. To say she puts her entire self into the Lizzie role is an understatement, so believing the cut scenes she referenced were necessary to this feminist re-telling of Lizzie Borden’s story isn’t difficult.

“It’s always a gamble,” she says, acknowledging that finding a director to come aboard a project that already had its script and stars in place leaves them with less ownership.

The now 43-year-old actress has been cast in explicitly sexual and often violent work. That much of this work is queer-themed is both for better and for worse, as sometimes it means heartbreaking consequences and punishment for the LGBTQ characters within – Lizzie included. Sevigny’s breakthrough role as Lana Tisdel in Kimberly Peirce’s 2000 film Boys Don’t Cry is perhaps what she’s best known for, garnering her Indie Spirit and Satellite awards, Academy Awards, Golden Globe, and SAG nominations. She was also up for Best Kiss at the MTV Movie Awards for her on-screen love scene with co-star Hilary Swank, who portrayed trans man Brandon Teena. Later, Sevigny would play a trans hit person on the self-contained controversial series Hit & Miss, as well as appearing in lesbian, bi, and queer roles in television (American Horror Story: Asylum), film (Party Monster) and the all-star HBO TV movie If These Walls Could Talk 2, which had her playing a motorcycle-riding butch greaser dyke opposite a love interest played by Michelle Williams.

Sevigny says the roles she chooses, though explicit or racy and, at times, contentious, are not without reason or merit.

“I think other films are more, I don’t know,  titillating or something – like Bound,” Sevigny says. “I think my films – not that I’m any better – but I think there’s a certain respect around them that maybe that kind of [salacious] talk isn’t prevalent around them. I think what happens between Kristen and I in the movie and our friendship is we’re connected outside the boundary of class or sexuality or sexual identity, you know? It’s something bigger. And it’s not gratuitous, either, and I think that’s also a main thing that runs through all of my films.  Whenever there’s sex, it really serves the story. Even in this movie – we’re never even out of our clothing together but still, it’s as sexy, or as possible if we were naked because of where you’ve gotten up to that point in the movie because you’ve seen how repressed they are, so it’s satisfying in its own way when you get to that point.”

Lizzie and Bridget’s being found out weighs heavily into the rest of the film, with homophobia leading Mr. Borden to ensure his daughter will receive nothing from him should he ever meet an untimely death. (Instead, he signs his estate over to Lizzie’s uncle, the equally evil Denis O’Hare.)  Audiences will likely root for Lizzie to succeed, and for her relationship with Bridget to survive outside of the stifling staleness they’ve been forced to live in, which turns a lot of queer horror tropes on their head. Instead of seeing Lizzie’s homosexual leanings as proof that she’s sinful and, therefore, a villain who deserves to be punished, Lizzie provides a much more complex context in which to understand why a young woman who might have it in her to murder her own parents.

“Yes, I do think she’s likable,” Macneill says of Lizzie Borden. “The film intentionally walks a fine line though. It allows you to identify and sympathize with a person doing who has done something extremely brutal. I want the audience to care for her – but I also want us to be afraid of her.”

Sevigny tells INTO she loves films like Heavenly Creatures, “where women find strength within each other and fight their oppressors.”

“If Lizzie did, in fact, do it, there’s no way that Bridget couldn’t have known that it was happening and/or have been a part of it in some way,” she says, basing her theory on a tour she took of the Lizzie Borden house. “To us, the love story is greater than anything. It’s them finding strength through one another, and it’s also a tragic love story. Lizzie is projecting so much on to Bridget and expecting so much and her expectations are thinking she’s going to find happiness and freedom through this love – and in the end, fighting for it, she actually loses it. We thought that was a tragic twist.”