At the London Pride event this year, while TERFs staged a jaw-dropping transphobic protest at the front, somewhere at the back was a truck bedecked with a banner that read: “Queer Liberation Not Rainbow Capitalism!”

Between the vanilla floats of Facebook and the National Crime Agency, a mob of mohawks, piercings, and attitudes danced to pounding hardcore, joined by a man in a greasy studded denim jacket who had a little rainbow flag on a stick clenched between his buttocks.

Born of a boozy, hurried mind, Pride Punx is the rowdy vanguard of the UK queercore scene, invading the sanitized commercialization of the London Pride Event like a horde of fabulous barbarians storming Rome. Irreverant, anarchic and very, very loud, their float has become an iconoclastic feature of an overwhelmingly corporatized event over the last three years, blasting hardcore punk and blowing kisses to an equally bemused and bewildered crowd.

We caught up with collective member and organizer Tali Clarke to find out what it’s all about. 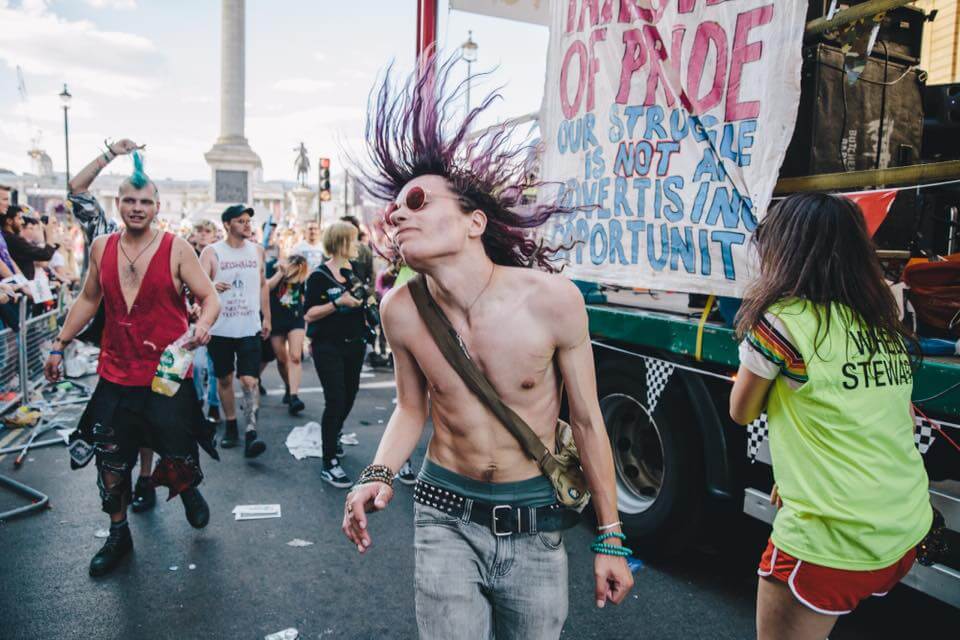 What’s the aim of Pride Punx?

The aim of PP is to represent LGBTQIA+ people as part of the punk rock and activist communities, but with no one excluded. It’s literally however you identify is as valid and important as the next, as long as you believe the same of all of those around you. It aims to party, protest and take action in a completely liberated way, creating a strong network of support for anyone involved or in solidarity with us.

Who are the bands? Who is involved?

PP is ever growing, so the people and bands involved keep growing, too. So far we’ve had the love, support and fire from various crews in London (with local squatter social centre Noah’s Ark being incredible in helping with the fundraising), countless individuals from the punk and queer scenes in London, Brighton, Bristol, Leeds and beyond, tech help from DSI Studios in Tottenham, performances from The Red Rash Inn, The Dub Righters, Gay Panic Defence, Poisonous Cunt, Tout Suite, Do One, Shot!, Pints, Rotten Foxes, Wonk Unit, Stella Meltdown, Cassandra, Jizmik Hunt, Jacqui Potato, Anarchist Wood, Jakal, and collaborations with The Outside Project, Apocalypse Dudes Present and Luna Punx. Also the lorry company Guest Ex have been fabulous. There is more and it keeps growing, but basically many people have and continue to be utterly amazing.

Why are you involved?

I wanted to do it, so I did it. It was always meant to grow, and with everyone else having their own reasons, it has been pretty damn great watching it do so.

How has the activity spread beyond the Pride event?

Lots of fundraisers needed to happen each year in order to make it happen at the parade, as it costs over £2.5k all in all. This resulted in lots of events that have become increasingly more diverse as PP has picked up momentum over the last three years. Last year we managed to raise more money than needed, so were able to donate the extra to The Outside Project, who were only just starting back then. They wanted and succeeded to buy Status Quo’s old tour bus and turn it into a mobile LGBTQIA+ homeless winter crisis shelter. 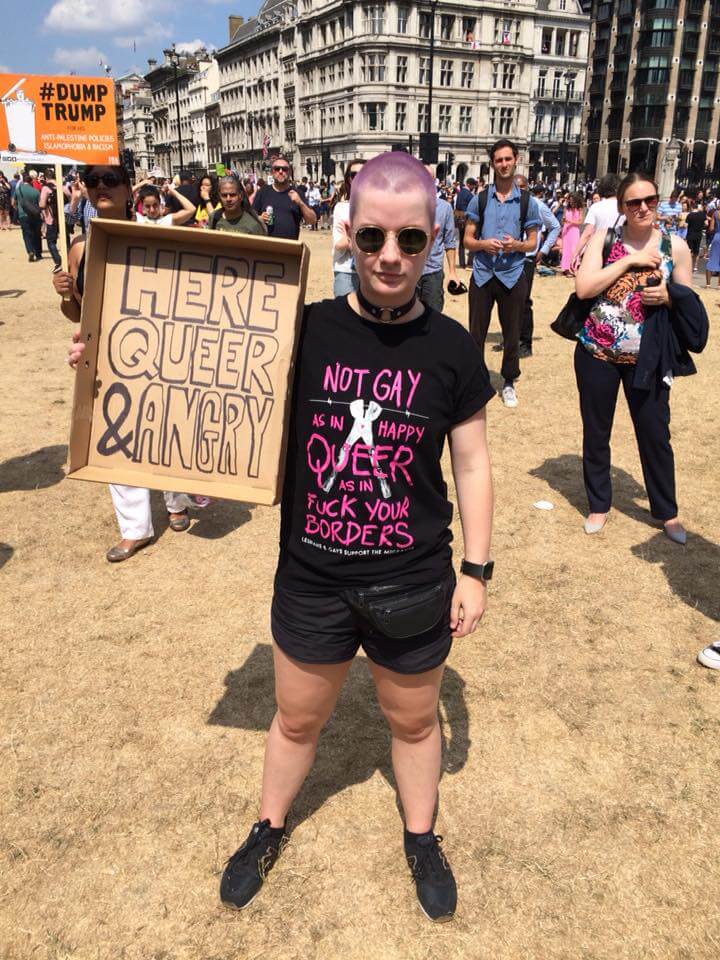 How would you describe the politics of PP?

Anti-discrimination, sex-positive, non-elite, hungry, all mixed in with a lot of humour and loud noise. But that’s not really politics, is it?

Have you had any problems?

By its very nature of starting out and continuing to be at the official London parade it has caused differing views, which are understandably charged. It was born of the fact that many queer activists and alternative people boycott the parade (and rightly so) due to the corporate pinkwashing the event has now become. I originally wanted to create an alternative within it so we could still be there, doing it our own way, reclaiming the event as a people’s celebration and protest march of remembrance of the activists who changed the course of queer history.

This has not come without criticism. With the increasing cost and security measures imposed on us, people are starting to feel penned in again, which feels like relenting to the bullshit commercialization of it all. We’ve come to a crossroads now where we need to consider if there’s still a reason for us to be at the official parade anymore. The amount of money we raise each year could go to amazing charities like The Outside Project, or to help fund actions and different events. But also that begins to exclude all those amazing people that have reached out since the creation of PP who aren’t directly involved in any underground music, community or political scenes, who have said that our inclusion in the parade is the only way they’ve felt they had a place there. But this way it has also helped bring more people into these often hard to find and unfortunately sometimes seemingly intimidating communities, and merge with parallel groups and performers.

I think that if we are to exclude ourselves from the official parade, it would be really important to keep trying to reach out further than our underground platforms, so that we can keep engaging with whoever might find peace, acceptance or strength through being involved. All of this is a question right now. We’ll see what people are saying as a collective later down the line.

What’s your response to the TERF action at the London Pride Event?

We were unaware what had happened with the TERFs at the parade until after we had finished, and were all absolutely shocked and disgusted. We only have love and acceptance for our trans siblings, and the way in which these exclusionary groups communicate their ideas is hateful and dangerous. The parade’s dealing with this issue is another reason as to why we may not be returning next year. 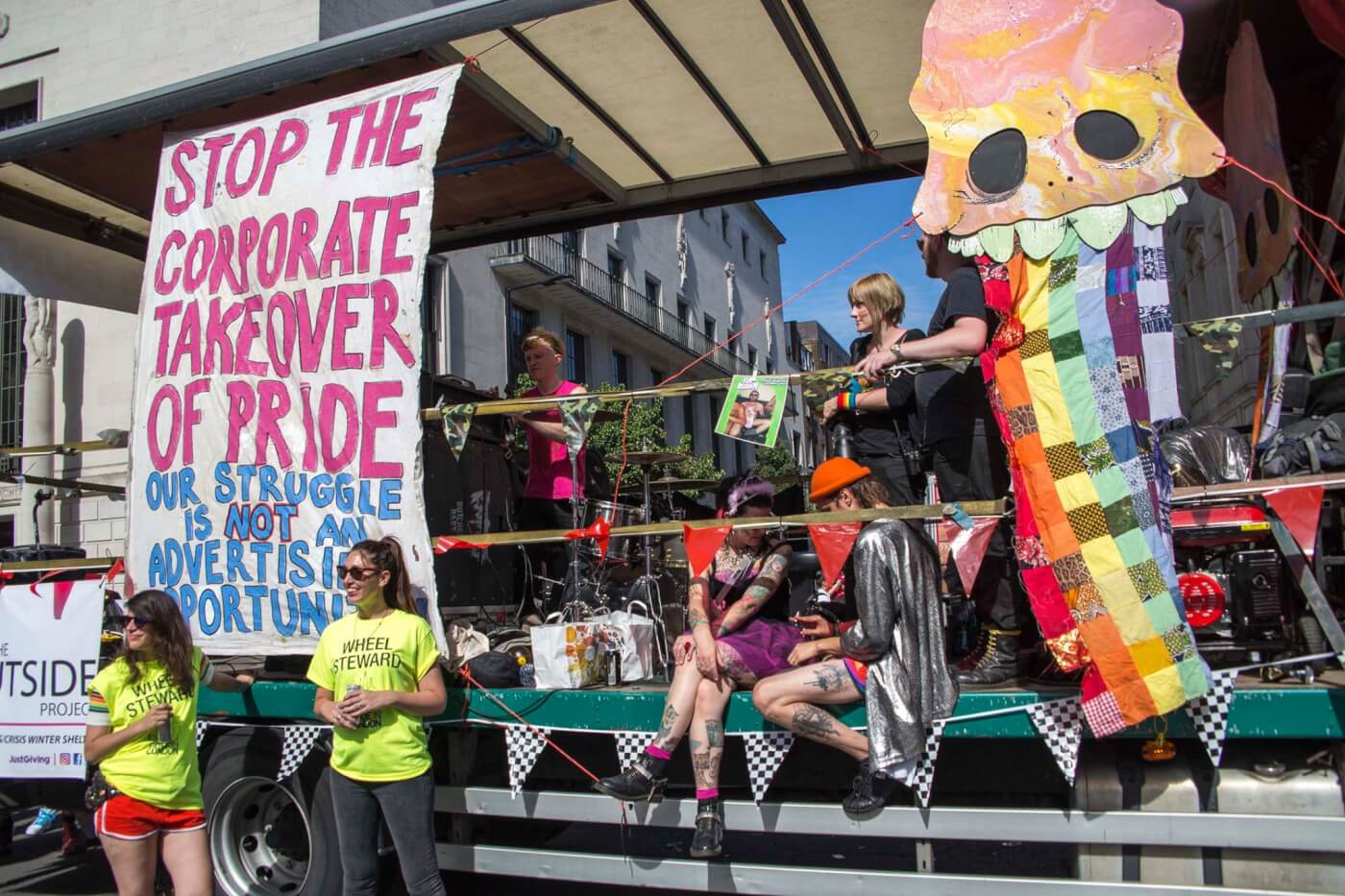 What’s next for Pride Punx?

Next up is to keep growing! We want to get more events and collaborations on the go, and to reach out to as many people as we can. We’re thinking about heading to a few different smaller Prides next year, and maybe get some more festival slots, to spread our weird and wonderful wayward ways worldwide… Anyone that wants to get involved, message the Pride Punx Facebook page, Instagram, or email [email protected]. There’s a collective group that we can direct you to that anyone can join online.