“I was thinking about what my life would have been like had I been born into a different century,” writes Boston-based artist and educator Ria Brodell in the introduction to their forthcoming portrait book, Butch Heroes. “As a former Catholic, I knew that ‘homosexuals’ were called to a lifetime of chastity or service to the church, but I supposed that queer people of the past must have found other ways to live, and I wanted to find out how they did so.”

It was 2010 when Brodell, who identifies as trans and non-binary, first set out to explore this query. They visited the LGBTQ sections of local libraries and searched for the stories of queers with whom they could identify – people who were assigned female at birth, presented as masculine and had documented relationships with women. When they found a name and narrative that interested them, they sought to learn as much as possible about the individual, including the names they preferred at any given time, details about their class status and cultural background, what they did to survive, how they dressed, who they loved and what their physical environment may have looked like. Brodell gathered this information from a variety of sources – firstly, letters or other archival material that included the subject’s own voice, and secondly maps, journals, paintings, photos and artifacts that give color, texture, and context to the subject’s daily life. 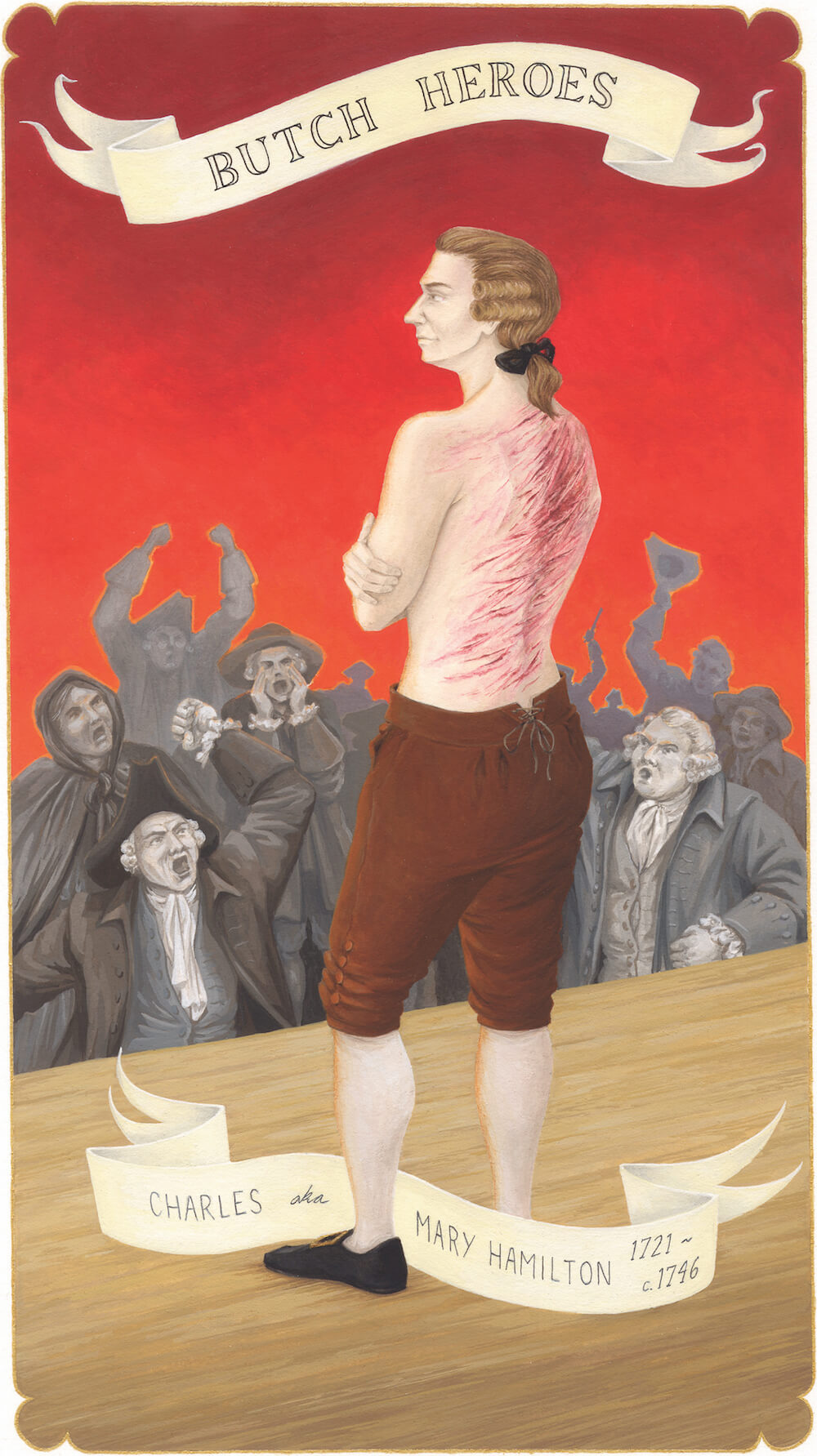 The individuals Brodell has chosen were born as early as 1477 and as late as 1934, and while most of the subjects lived in Europe or the United States, Brodell has also included people from Japan, Thailand, Cuba and indigenous territories in what is now North America. As for the title of the project, Brodell also explains that in the introduction: “I chose to use ‘Butch Heroes’ to indicate people who were strong or brave in the way they lived their lives and challenged their societies’ strict gender role.”

Then came the portraits. Brodell decided to model the paintings on the format of the Catholic holy card. On these cards, which are handed out at funerals and used to commemorate other special events, one side depicts a saint or religious figure in rich and sometimes dreamlike detail, framed by an elaborate border; the other side includes a prayer. “For me, this format is a perfect (subversive) way to present the lives of people who were long forgotten and abused during their lifetime,” Brodell writes in the introduction, “especially because so many of them were accused of ‘mocking God and His order’ or deceiving their fellow Christians.” In Butch Heroes, each portrait is accompanied by a brief biography of the individual, including details about their lovers and life journeys.

Most of the individuals painted by Brodell made it into the history books because their “secret” had been exposed and they’d been subject to some horrific punishment. Yet the artist has been careful not to solely depict scenes of brutality – the heroes are also captured working, relaxing in their homes and wandering about town.

One of the greatest strengths of Butch Heroes is how the 28 portraits honor resistance as much as subjugation. And when Brodell does paint their subjects in moments of suffering, they do so in a way that honors the full complexity of the butches’ lives and deaths.

Charles aka Mary Hamilton who was sentenced to be whipped in several English towns for falsely representing himself and marrying women,  is depicted on a raised platform. We see Hamilton’s bloody back and the raging crowd below, but he is not cowering. Instead, his chin is lifted as he gazes, seemingly unbothered, into the distance.

Meanwhile, in the portrait of Ann Marrow, who was sentenced to stand in the pillory at London’s Charing Cross in 1777 for “personating a man in marriage,” the subject’s body hangs limply from the wooden structure in which her wrists and head are encased. Marrow’s face and clothing are bloodied, and her eyes are closed – she is exposed to the violence of the world and has accepted its inevitability. Brodell’s project is undoubtedly a risky one – in seeking to capture butch experiences across time and in non-Western contexts, the artist risks flattening long and complex histories of gender diversity instead of celebrating them. That said, the portraits give homage to contemporary ideas of queer ancestry, and in doing so give strength to trans and non-binary communities currently under attack. That makes Butch Heroes worth celebrating. 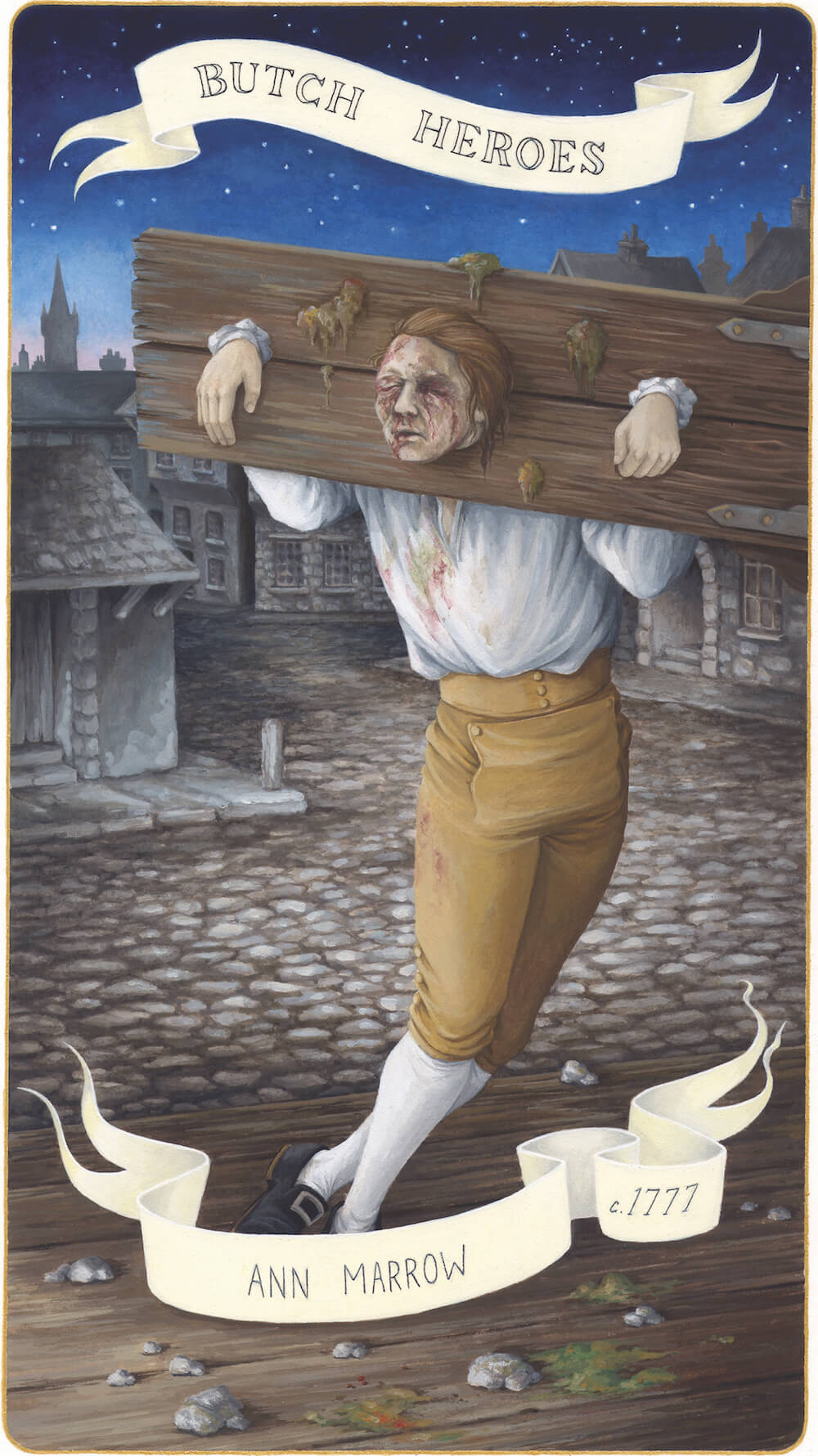 Ria Brodell: That’s tricky. Luckily, sometimes I get an idea right away from their story. Like, say, Sammy Williams or John Oliver. They were working class. John Oliver was constantly pushed from town to town when they were discovered and I just felt like I wanted to show them doing their job. So right away I knew that’s how I wanted to depict them. Then I just set about kind of trying to figure out what that looks like. What did the clothing of a lumberjack look like in the 1800s? What kind of trees were they cutting down? I learned a bunch about white pine, because that happened to be what they were chopping down through the Midwest.

What did you learn about white pine?

RB: The texture of the bark, and how big they would grow, and how, basically, they were decimated. They had to replant all of those forests through the Midwest because they just took every last one of them down. Sometimes I struggle with trying to figure out how to depict them because maybe their story is just really elaborate. Like they just have all kinds of stuff going on in their lives and I don’t really know how to portray them. I’ll just kind of start by doing a whole bunch of sketches, and try to figure out a composition that I like and that sort of tells their story in a concise way.

So much of the project revolves around who’s remembered in historical texts or documents, and who isn’t.  Can you speak a little bit about that?

I do a lot of reading and reporting about trans experiences in prison, and a few years ago I covered an art exhibition that was for/by LGBTQ prisoners. A lot of the trans contributors drew themselves. I’ve been thinking a lot since then about the question of trans embodiment through art, and the possibilities and dangers it offers in terms of bodily reclamation. I was curious if you could speak a little about that?

RB: I think a lot about the fact that I’m representing people that are no longer with us and I’m really sensitive to that, and to the fact that I’m representing people also from different cultures and different backgrounds than I am, but yet I still relate to them. That’s the point of the project, is finding people are assigned female at birth, masculine presenting and in relationships with women. There’s that, but I also really look closer – just look at their narratives, how they presented themselves. Hopefully, I can find how they spoke about themselves and I try not to put any sort of contemporary language onto them because I know they didn’t have access to that. I really don’t know how they would view themselves today if they had the options that we have in presenting our genders or our sexuality. Would they have made the same choices in their lives? There’s no way for me to know that, and so I just have to look at their story and do my best.

In the introduction, you write that the figures depicted on Catholic holy cards “are revered, one is meant to look to them for guidance or to help find peace,” and that’s part of why you were drawn to use this format for the project.  With that in mind, I wanted to ask how you hope this book will impact readers or the public at large.

RB: I hope that people will see what I’ve seen. In a lot of ways we’ve gone backward and that gender nonconforming people, and non-binary, queer people have existed throughout time, of course, and throughout all cultures. I think we forget about our history or don’t even know our history as queers. It’s not in the textbooks, and so I hope that people can use this, queer people especially, as just a starting point to learn more about our own history.

Do you feel like you got an answer to your wondering about what your life would have been if you had been born at a different time?

RB: No. Not at all. I feel like, I don’t know. Those people were so amazing. I really doubt that I would have been as badass as some of these guys. It’s pretty crazy.

Butch Heroes is available from MIT Press on Oct. 30.

This transcript has been edited for length and clarity.