Kyle Ross and Max Carter got engaged in December. Max proposed to Kyle over the holidays, after over five years of dating and shortly after moving out to a new home in Las Vegas. The young couple announced the news of their engagement in much the same way as most young people these days: a picture of the ring on social media and a “He said yes!” tweet. They got a whole bunch of likes on these posts, as most engagement announcements do. If you were just scrolling past it on your timeline, you’d likely mistake it for a typical Christmas proposal. It was an ordinary engagement, just like any other.

They’ve been shooting scenes for Helix for about as long as they’ve been together (over five years). Through those years, they’ve grown as boyfriends not just within their relationship, but on social media, inspiring a fanatic following. Even as they’ve taken on newer roles, Kyle as an administrator for the company, and Max as the director of Helix sub-site 8TeenBoy, they continue to perform as models, often together.

From encouraging social media use among models to casting model boyfriends together, they are marketing not just the sex of its scenes, but the men themselves. They are creating, as Kyle called them in an interview, “personality stars.” Rather than create a fantasy, as pornography most often does, Helix is making reality sexy. 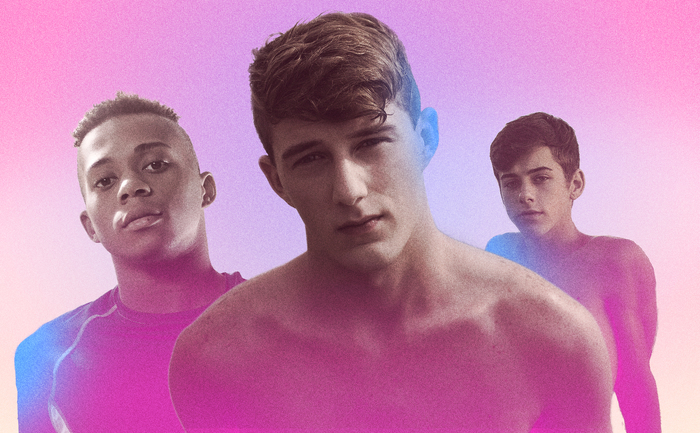 Suffice it to say, Helix Studios doesn’t believe in the factory system. From family dinners both formally and informally planned by studio heads, to awards ceremonies attended as a unit, to a general sense of camaraderie between the models, there’s plenty of incentive beyond just money for guys to work with the studio repeatedly.

“You can break up and it’s done and there’s still going to be people.”

This high quality of production draws a high quality of model, all of whom are flown out, meet the other guys, flirt, and have fun. Because of the focus on the personal, a Helix relationship like Kyle and Max’s is not uncommon. Joey, for instance, dated co-star Ashton Summers for several months last year. Newer model Marcell Tykes joined the studio with his boyfriend, Adrian Kelley.

“We made the decision to come in together,” Marcell said during a December visit to Helix’s studio in San Diego. He first talked to Casey before he met Adrian. “Once the scene came together, that’s when my boyfriend came into the picture. I told him about it, and he was interested in doing scenes together.” 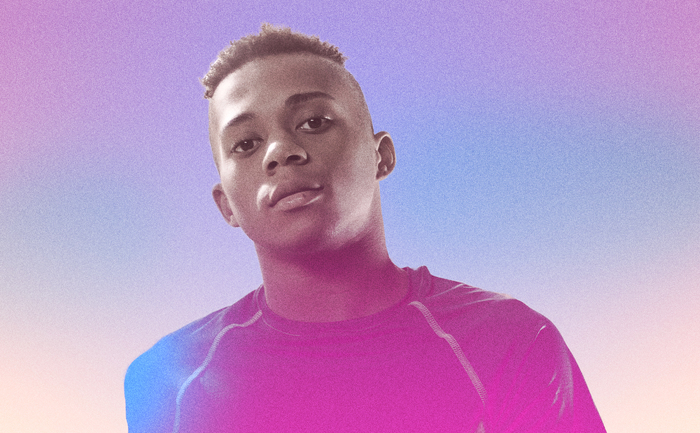 You might imagine Helix to be hesitant about these relationships, for fear of mess on set or breakups. Other studios deemphasize the personal lives of their models to a great extent; Sean Cody, for instance, names its models only by first name, and most don’t have social media accounts. Their introduction of real-life boyfriends Deacon and Asher as models last year was a major break from tradition.

Helix, on the other hand, leans into the dating every chance they get.

“I love filming boyfriends,” producer Casey Roman said in an interview with his husband, director Alex Roman. “Since we cast based on looks and personality, the guys will come out here for a party and it’ll be like 20 guys, and they’ll all be the hottest guys, and they’ll all have the best personalities. So it’s the perfect Grindr for everybody.”

Most infamously, fan favorites Blake Mitchell and Casey Tanner broke up amid accusations of cheating. The two exes had a (now defunct) YouTube channel together, and their breakup drew headlines and panicked social media reactions akin to those following a Kardashian divorce.

Sometimes, the breakups are clean Joey and Ashton remain amicable, for example. But being friendly with your ex and filming a sex scene with your ex are not the same thing. Sometimes, a model swap or two is needed.

“I always ask them like, ‘Does this mean that you can’t be here at the same time with this guy now?’ or, ‘Was there somebody that broke you guys up?’ or, ‘Is this somebody that you hate now because of it?’” Casey explained. “Like, ‘Let me know who I can’t schedule you with.’ But it’s usually not a big problem.”

Still, a breakup doesn’t mean the end of the fandom for two Helix stars’ relationship. “You can break up and it’s done and there’s still going to be people,” Joey said. “There are fan accounts that are for me and him being together and it’s all people tweet about. People base their whole fandom, whatever, on that one piece. So it sticks around. It will never go away.” 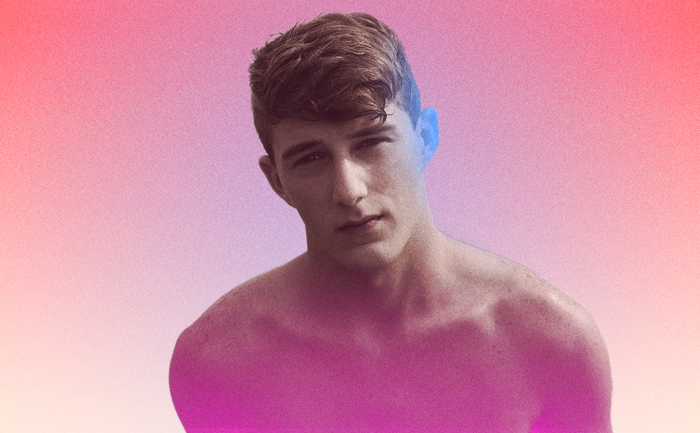 Not every model is eager to jump in bed with a co-star. Cameron Parks, a younger Helix model who also works behind the scenes as a PA for director Alex Roman, technically cannot date other models because of his office job. But he likely wouldn’t anyway.

“It’s very attractive, because you come out here, and some of the boys are like, ‘I’m from bumfuck Idaho, and I’ve never seen a hot guy before, and here we are having sex. I need to cling to that’,” Cameron told INTO in an interview on one of Helix’s sets. “It’s very publicized and everything you do is like an internet relationship, and somebody is going to make a fandom over it, and try to create a Twitter account about you. Then God forbid something happens then you’ve got to pretend like you’re still dating or something. It adds more of a headache to it.”

There are benefits to dating that go beyond love that might make such a headache worth it, though. “Ashton Summers got like 40,000 followers from dating Joey for like two months,” Cameron said. In essence: The fans got invested in Ashton because of the collective Ashton and Joey. But that isn’t enough for Cameron: “I can see how it’s appealing, but I’d say try to really get to know the person before you maybe publicize it.”

Keeping Up With The Stars And Fans

Kyle and Max, interviewed together when they came in from their new house in Las Vegas (where Helix is moving the majority of its operation to), said that the female fans tend to be the most invested of all. Kyle even described them as “mega fans.”

“We want everybody to be special here… We want them to be stars.”

It’s not totally unprecedented: Other queer properties have been growing their female audiences as of late as well. Think of RuPaul’s Drag Race, which enjoys an enormous fanbase of young girls. As gay content moves into the mainstream, so too does the audience diversify. 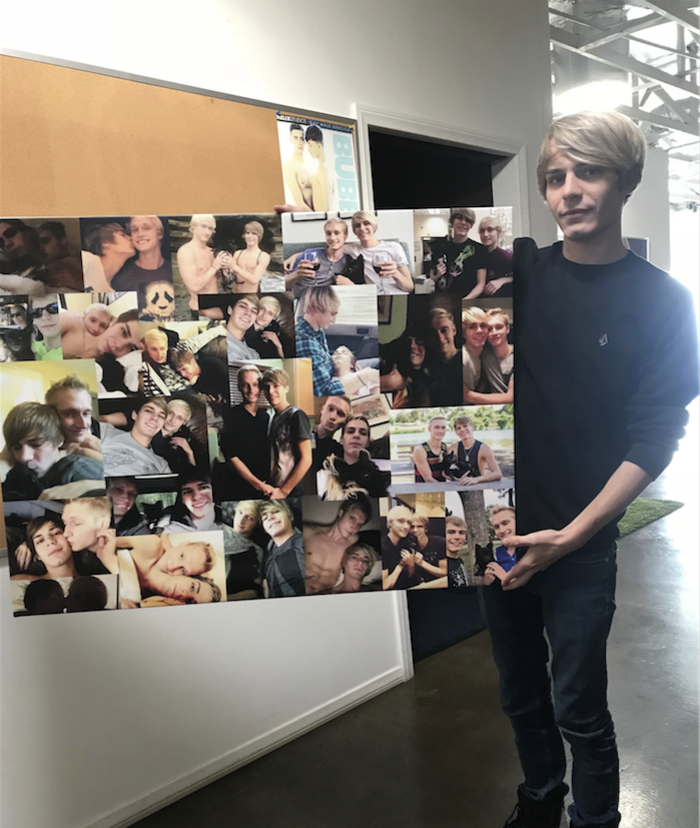 Perhaps most surprising was the case of Tristan Adler, a model with Kyle’s 8TeenBoy sub-brand.

When INTO visited Helix in December, Tristan’s first scene had yet to be released. Yet that hadn’t stopped fans who already knew him on Twitter and Twitch from sending in presents. As Kyle noted, all it took was a mention or two from production on Twitter, “and he’s got gifts coming in nonstop.” When Tristan finally came in to pick up his gifts, it took multiple trips and the help of fellow model Luke Wilder just to get them all out of the studio.

Thanks to these fan gifts, Twitter is practically a second revenue stream for models. And Helix is eager to feed into the social media frenzy. Though Kyle stopped short of saying having a Twitter is required, it’s clear that it’s an expectation of being part of the studio.

“If we are going to be having them out, we are going to be using them over and over, we strongly encourage them to be on Twitter,” Kyle said. “That’s so important, just to have a presence. Even posting their personal stuff, it’s so important. Also, the second thing is that when people out here, the way that it’s run, the way that it’s professional, people are proud to get that Helix deal. People are proud that, ‘Oh my God. Helix called me and I’m out here filming now.’ They want to tell everyone about it, and want to share their experience.”

This goes for fans, too. “I remember a fan said how did it go? ‘There’s no point in having a Helix membership if you don’t also have a Twitter,’” Alex said.

The Q began as a way to keep the interactive element from their now defunct live shows, Alex said; they missed the interplay between fans and models. Looking at it as part of their whole brand, though, it feels natural and fitting. The studio that draws such interest and passion from Twitter would obviously have Twitter Q.

If the relationships are the reality TV side of Helix, then these Q are the vlogger side. Not much separates a #Helix segment from any twink YouTuber’s frequent Q videos besides the fact that the Helix models fuck after, of course. With that in mind, it’s unsurprising that Blake Mitchell and Casey Tanner had their own YouTube channel, or that Joey and Cameron briefly had their own. These channels aren’t officially affiliated with Helix, but they all help make these models more human and draw even more fan passion. It’s all a part of building, as Kyle put it, those “personality stars.” 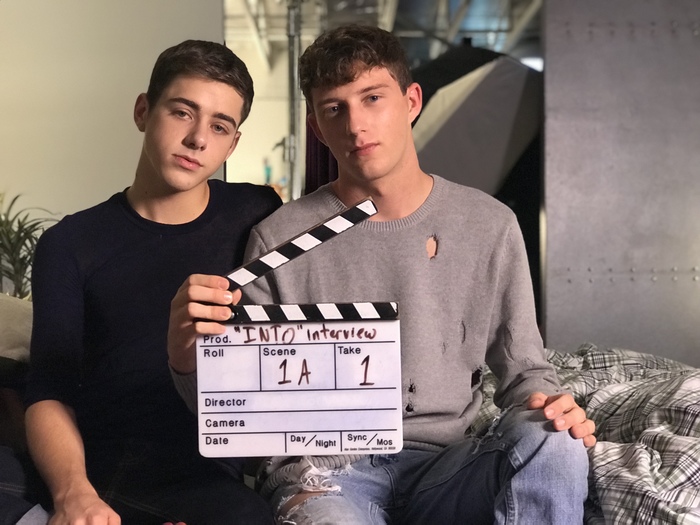 “We want everybody to be special here,” Cameron explained. “Keith [Miller, Helix’s owner] is always saying, ‘We want them to be stars.’ That’s his vision of everything, and he wants everybody to be ‘You can only come here to see this.’ You can’t run away to somewhere else or you can’t loop around it. That’s how we want our revenue.”

Helix Studios is aiming to inspire devotion, and not just based on the quality of the scenes, though the quality is award-winning. But with exclusive models broadcasting their lives across social channels, Helix is selling the idea that theirs is an experience you cannot find elsewhere.

Think of Kyle and Max’s next few months post-engagement, for instance. They’ll be wedding planning, eventually executing it, and then moving on to married life. Will Helix viewers get to see the wedding? Will they shoot a marriage scene perhaps even film their honeymoon? The possibilities are endless.

But one thing’s for certain: The fans will be watching.