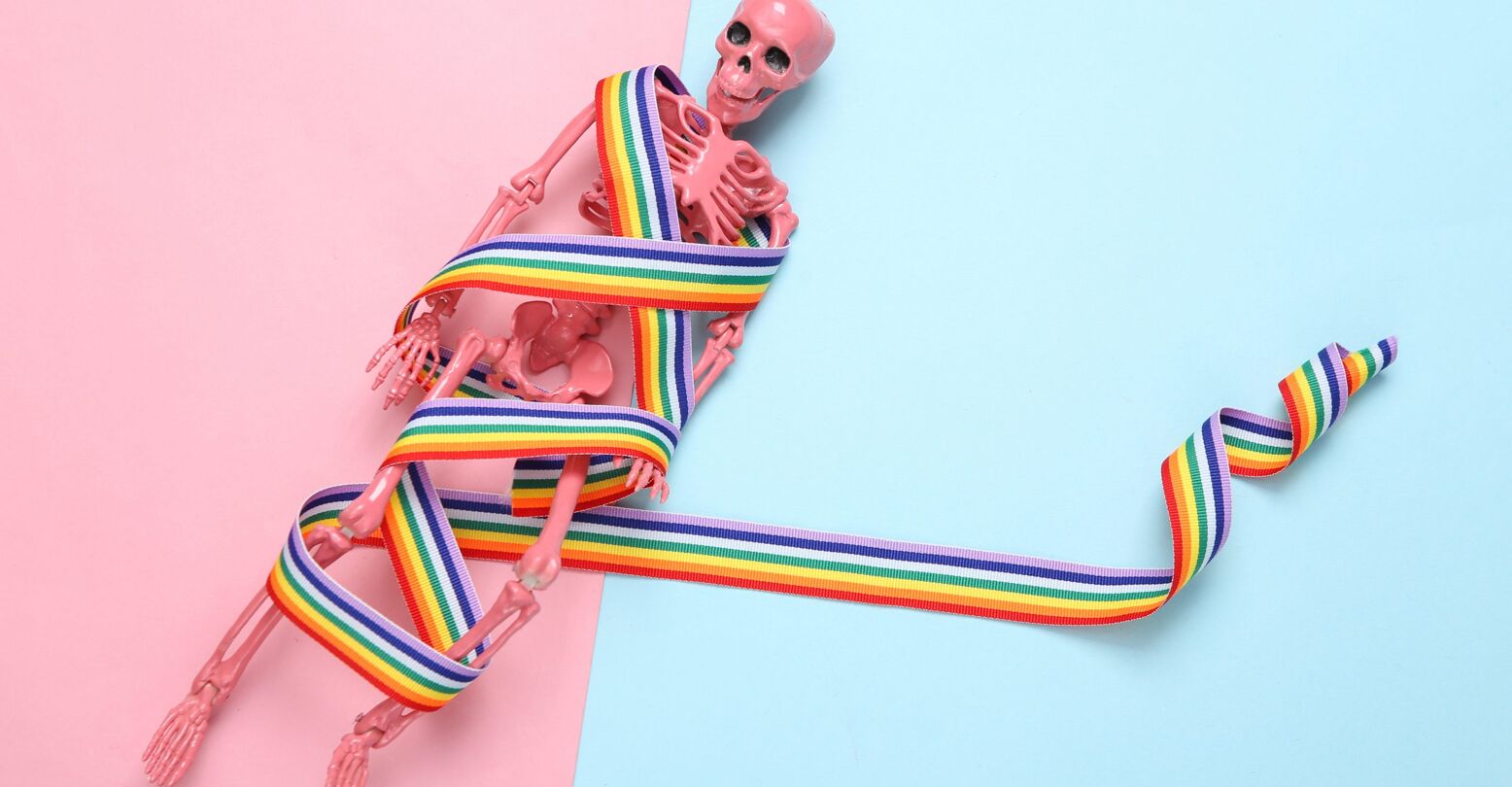 It’s officially spooky season, and for the queer community, that means it’s the time of year where we are at our most powerful. It’s basically Pride Month Part II.

As an out and proud nonbinary lesbian 30-something with a fully decorated front porch and a skeleton collection, I may feel this way about Halloween now, but I haven’t always.

When I was sixteen, I was scared so badly at a haunted maze park that I swore I would never return. A werewolf in a chainsaw chased me down a path and into a theater featuring a performance of “Halloween Snoopy on Ice,” which I watched three times before escaping to the parking lot. It’s an embarrassing story that I always use to describe my aversion to the world of fear and horror. But a lot has changed in the decades since, so this year, I figured there was enough healing distance from that tragedy that it was time to try again.

Things didn’t start promisingly: I was a wreck in the car—my girlfriend had to drag me out—and I kept trying to convince my friends to check my pulse on my neck as we queued up at the front gates. I had already sweat through my patterned button-up and denim jacket (an outfit that matched perfectly with another lesbian in our group) before we made it to the first maze.

But, to my complete surprise, it was nothing like I remembered. Immersed in a world of horror with a group of my closest queer friends, I felt complete and unbridled joy. Dizzy with adrenaline, I made it back to the parking lot after midnight in much better shape than I’d come in.

And this is a phenomenon that I’ve also been experiencing to a less extreme degree with suspense and horror films: another world in which I had long cut myself off. Movies that used to leave me sleepless and tormented are now regular date night fodder. My partner lured me in with promises of a queer plotline in “The Haunting of Bly Manor” and I haven’t looked back since.

Immersed in a world of horror with a group of my closest queer friends, I felt complete and unbridled joy.

I could attribute this embracing of the grim and ghastly to my general growth as a person, but I actually think it might have a simpler, if not maybe stranger, explanation: I understand myself as queer now, and I didn’t before.

The question of “why do queer people love Halloween?” is not an unexplored one, but I am unsatisfied by how often the analysis boils down to our collective love for camp and costuming. It is true that many of us use Halloween as a way to express ourselves in a world that considers our existence and expression audacious and taboo, but that stops short of completing the whole picture. What about the horror? The fear? The grotesque? What part of Halloween makes so many other people turn their heads and wince, but seems to draw many of us in this community even closer?

Theory #1 is that scary movies seem to understand us in ways that mainstream Hollywood does not. Horror is a fascinating genre because the best titles are always tapping into larger cultural anxieties. There’s usually something bubbling just below the surface, and fans are conditioned to dig underneath to figure out what’s really going on. And intentional or not, a lot of horror films are dripping in homoerotic subtext. For many of us born before the new millennium, these films might have been our first introduction to feelings that were exciting and unexplainable, buried deep where straight audiences couldn’t, or wouldn’t, find them. Many of these films featured vampires or witches—think The Craft, Interview with the Vampire, or even the less subtle HBO hit True Blood—and showed us dangerous but deeply sexy characters that seemed to be batting for our team even if we couldn’t explain why. More overt examples, like cult-favorite Jennifer’s Body, suffered at the puzzled box office but have found renewed life in our little queer hearts.

What part of Halloween makes so many other people turn their heads and wince, but seems to draw many of us in this community even closer?

Theory #2 is that Halloween is a risk-free way for a lot of us in the queer community to experience fear. For a group whose existence is often laced with constant low-level anxiety about how we’re perceived and what that means for our safety, it can be a huge release to lean in to dread when we know what lurks in the dark can’t actually hurt us.

In my little pod of friends at the maze park, it felt safe to indulge in the full range of my emotions in the face of fear: I could scream, jump into my partner’s arms, swear and laugh and run. But generally, we can’t. Many queer people will recognize what it’s like to have to regulate those impulses, to freeze when we want to yell, to calmly explain or deflect when we start to sense that we might be in real danger. It’s comforting to know that for a little while, all of the monsters nearby are wearing rubber masks.

But even simpler than all of that, Halloween is a holiday that exists without obligation, that delights in the goofy and the joyful and the macabre for its own sake. There are no gifts to buy or family dinners to sit through, and it doesn’t take itself too seriously. For people who live at the periphery of society, it’s exciting to see the general public embrace the kooky and weird when they so very often do not. Our community was drawn to the world of Halloween because it made room for us to be different, and I definitely breathe a little deeper for the few weeks everyone else is leaning in, too.♦