In a landmark vote with broad-reaching implications for the nation, Massachusetts voters rejected a measure to strip away non-discrimination protections from transgender people in the state Tuesday.

The vote marked the first time in history that trans rights were on a statewide ballot. It was seen a bellwether for the country on trans rights.

Supporters of Yes on 3 to uphold the measure gathered in the ballroom at Boston’s Fairmont Copley Plaza Tuesday night and erupted into cheers, chanting the campaign slogan, “Yes On 3!”

“Tonight, we set a foundation for other states, and someday the federal government, to enact similar nondiscrimination legislation, protecting transgender and gender nonconforming people,” said Ryley Sage Copans, who campaigned to uphold trans rights through their non-profit Stand Up, Speak Out. “Tonight, with a majority YES vote we have not only shown Massachusetts, but we have shown the country, that transgender people are valued, supported, loved, and will be protected.”

On Tuesday, voters packed polling places from the Berkshires and Springfield to Boston and Cape Cod. With 52 percent of the vote counted, 68 percent voted “Yes” on 3 to uphold trans protections. There’s no telling what role early voting played in the result, which news reports estimated drew some 600,000 ballots prior to election day.

The historic measure put civil rights for trans citizens to a vote, a move that alarmed the community and its allies and especially frightened the parents of trans-identified children, who faced new waves of harassment as a result.

“I’m still kind of in that state of shock where it doesn’t exactly feel real because of how soon after the election results it is, but I’m sure it will really sink in tomorrow when I go back to school and celebrate with my friends,” said Kai Livingstone, a trans 17-year-old.

The ballot question left many voters across the state scratching their heads. More than a dozen who spoke to INTO before walking into their polling place expressed confusion about Question 3. A “yes” vote meant keeping in place the state law that protects trans people from discrimination in public places while a “no” vote would have repealed the law.

A WBUR poll in September showed 71 percent of voters would vote yes on Question 3 to keep non-discrimination protections for trans people in public accommodations. But on Tuesday, campaign workers expressed deep doubt about the fate of the measure. Internal polling suggested waning support, according to volunteers.

Katherine O’Connor, a 15-year-old resident of Brookline, a volunteer leader for Yes on 3, told INTO that hours before the polls closed, they felt the vote was looking very close and they were stressed.

Dee Rogers, who had been canvassing on the measure in Boston said the campaign was benefitting from great turnout from allies and queer community.

“That said, things are definitely up and down,” Rogers told INTO. 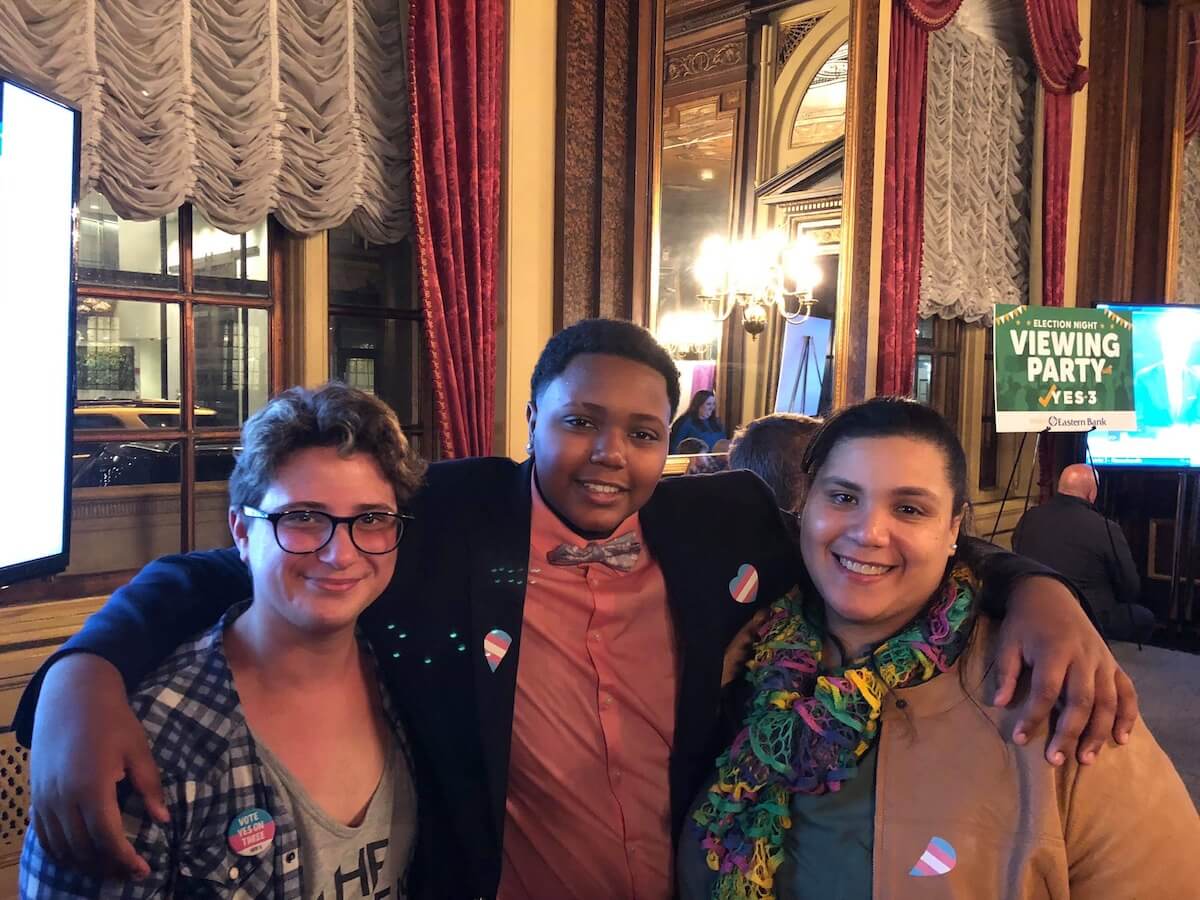 Kathie Carpenter of the Needham Coalition for Transgender Equality, another group fighting to retain legal protections, told INTO her supporters were hesitant to express confidence before all the votes were counted, “because people are afraid for their existence.”

Freedom for All Massachusetts, which spearheaded the resistance to the anti-trans ballot measure vastly out-fundraised Keep MA Safe, the campaign to roll back protections. Keep Massachusetts Safe, over $442,000 and broadcast a television ad intending to convince voters to repeal the law, while Yes on 3 advocates pulled together nearly $5 million to persuade voters to keep the law in place.

In the last week, Yes on 3 distanced itself from a profanity-laced counter ad that called on voters to “Be A Masshole” and support transgender rights. “We’re Massholes,” says a foul-mouthed Bostonian barfly, “But we’re not assholes.”

“Massachusetts has turned the tide,” said Kasey Suffredini, president of strategy at Freedom for All Americans, referring to the battle plan his organization put in place after a similar ballot measure in Houston in 2015 was defeated. “It hurts to know there are some people who voted no. We know from the victory that we’re securing tonight, that we have a massive movement to help reach those people [who voted no] to get to 100 percent.”