“I am constantly frustrated by anybody who says that we’re supposed to be doing something or that this is how we should be doing things,” he tells INTO. “With pretty much everything that I hear: relationships, marriage or any of that. There’s all these things that we’ve built to be expected of living a full life.”

And while that contrarian attitude no doubt can cause debate, it served as vital inspiration for Stewart’s first photography book, Fragile Masculinity, a series of male portraits that explores rigid notions of what is masculine through portraits of the male form. 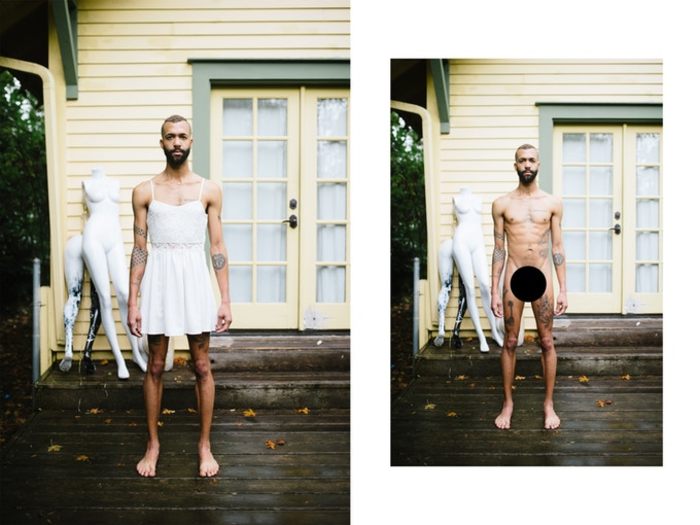 “I like to challenge what society expects of us,” the 30-year-old says. “Challenge what we’re trained [to think] and how media has shifted our perception of reality.” And for Stewart, the book, which is the subject of a recently launched Kickstarter, offers that challenge. For three months the creative shot 30 men in Portland, San Francisco, New York, and Los Angeles.

“Within a lot of my self portraiture work, I like to play with gender and challenge myself to do something different,” Stewart says. “The idea of fragile masculinity or just masculinity in general is playing such a huge part in the gay community, but it clearly is a bigger issue in the straight communitybeing scared of something that you’re not familiar with.”

Stewart is obviously not alone in seeing the effects of fragile masculinity and creating work to combat its prevalence. Other queer artists also have addressed it, most notably Tarell Alvin McCraney who wrote the play that would go on to become Moonlight, the Oscar-winning coming of age tale revolving around toxic masculinity. But others like Andy Simmonds, the artist who goes by the name Rooney, have also dug into the space. Rooney’s graphic based work include “Masc 4 Masc” tees written in pink bubble letters as well as “Make America Femme Again” merch in a series specifically targeted at the gay community.

Stewart, though, wants to divorce sexuality from his project, working with ideas of masculinity over all.

“It’s inherently queer work because I’m a queer photographer and everyone that I shot happens to be queer,” Stewart says. “But if I were to have shot 10 straight men and put those in, you wouldn’t or shouldn’t be able to tell because I would shoot them no different.”

Each model is shot nude and also wearing a dress.

“I wanted it to be super simple,” Stewart says. “So the idea was to shot all of these men wearing a very feminine type of dress as opposed to like a big ball gown or something that’s extreme.”

Stewart says that though he loves and respects draghis career began shooting drag queens in New Yorkhe purposefully wanted this to not be of that genre.

“Drag has an elevated sense and it’s about impersonating a woman but for this I wanted it to be a man wearing a dress,” he says. 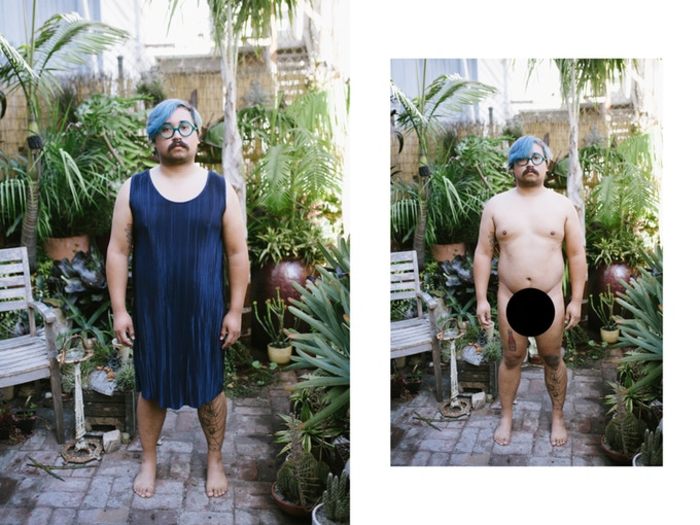 So he sourced bargain bins and thrift stores for the self-funded venture, selecting strappy, camisole sort of dresses and even slips in some cases.

“I knew if I put these dresses on a body that it wasn’t designed for, it would give it a really different look,” he says. And that look varies throughout the book as Stewart used a variety of body types, celebrating the beauty in all cis-male forms.

Some of those models pulled double duty as both subjects and artists. While the first half of Fragile Masculinity composed of the dual portraits, the second half of the 100+ page soft-bound book is a collection of work from queer artists around the world.

“When this started to become less of a zine and more of a book, I knew I wanted to put more people in it, so I just put the word out there,” Stewart said. What he received was submissions from poets, creative writers, and illustrators all riffing on their own personal ideas about fragile masculinity. The result is a collection of voices that the artist hopes can change thoughts and perceptions about who men should be.

As part of the campaign, Stewart released a video that questions why we continue to believe that a piece of fabric should be what makes someone a man or woman. That messaging is already resonating with people.

“The day I launched my Kickstarter, I had a friend who had just gotten a text message from his mom,” Stewart says. “Basically it was about the fact that he likes to play with gender in his every day, and he switches it up. His mom sent him a text that day saying ‘So are you a woman now? Are you going to start dressing like a woman?’ He was super frustrated, and I had just posted my video [on Kickstarter] and so he sent it to her. And he said just that video of me talking for three minutes sort of shifted how she saw and felt.That’s what I want.”

The “Fragile Masculinity” Kickstarter runs until January 15. The book is expected to release March 2018 and will be available for purchase after completion.