“Everything I do is for the girls,” says Maya Monès, a model based out of New York who also DJs under the name br0nz3_g0dd3ss. When she’s spiraling on a shoot or working through some shitty comments, it’s the trans women in her life who bring her back and keep her focused. “They remind me that what I’m doing is bigger than me,” she says. “They’ve been my support system from the jump, and they always will be.”

Her faith is not misplaced. For the past few months, Monès has been crowd-funding her facial feminization surgery on YouCaring, and over that time the girls have shown up for her over and over and over again, raising nearly $30,000 by the fundraiser’s end last night. We were wondering how she’s feeling now that her long-imagined future is about to become her present, so we caught up with her over the phone on Saturday during the final hours of fundraising. Check it out below, and Venmo her some recovery money at @maybeitsmaya!! 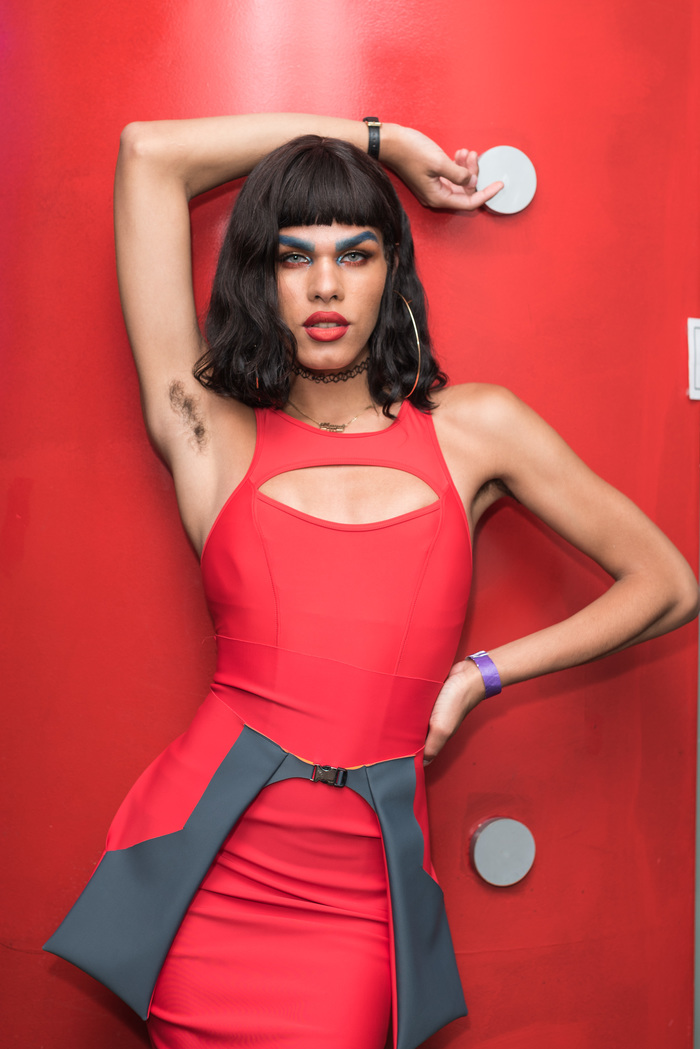 HARRON WALKER: In your Chromat interview, you said that you find a lot of strength “in envisioning a young Maya seeing herself now thriving on her own.” Who was the actual young Maya seeing in magazines and on screen? Who inspired her?

MAYA MONÈS: I grew up pretty sheltered, so the only person I really had was a vision of myself, who I wanted to be. Another big person who inspired me is my mom. I know that’s like everybody’s pageant answer, but really! We were born on the same day and have a really special connection. She made everything out of nothing, and she taught me to put others before myself. Everything that I am today and everything that I hope to be really is a reflection of her. Everyone’s always like “I’m turning into my mom!” with fear in their voice, but I’m like “Hell yeah! I’m turning into my mom!!”

So many trans girls I know, myself included, are super particular about the photos they post online. Your line of work is like entirely shot by other people. Did you have to work to develop a comfort level around that, and, if so, how’d you do it?

I mean, yes and no. I have developed a comfort level, definitely, but I’m never really 100% comfortableever. It’s something, on some level, I’m faking and pretending because I know that my position is helping other people. That’s what keeps me going. I practiced in front of the mirror to figure out what angles I’m comfortable with. It’s really limiting because I can’t fully be the artist I could be through modeling, really letting myself go to make art with my body. I grew up acting, so it’s been really easy for me to turn that counterfeit confidence on and off.

You were in acting? What kind of roles did you get to play?

Well, actually, I played two trans women when I was 15 or 16. I played Angel in Rent, who’s depicted as a gay boy but really she’s one of the girls, and I played Mary Sunshine in Chicago. In the movie, she’s a female reporter, but in the show she’s a trans woman, pretty much. There were some random ones, too. I played Audrey, the plant, in Little Shop of Horrors, with a deep voice and everything. I’ve tried to get back into it, but it’s hard to find roles that are meaningful for black trans women. We’re always the same old narrative, and it’s a boring narrative. I want a role that will make people see us as humans, not the same story that’s already been told. I’m hopeful that will come along.

What kind of fashion industry work do you hope to do someday?

I really want to work overseas and hit the Paris-Milan-London runways, really have the world see me stomp. Nobody does it like I do. Just me walking into a room can change and challenge so much, so I can’t imagine what my runway walk would do to the fashion industry.

Who are some of your favorite people you’ve already worked with?

My favorite people I’ve worked with, and there’s a lot of people that come to mind, are Chromat and Gypsy Sport. Both brands really allowed me to be myself. They really did not limit me as far as my walk or my pictures. They looked at me and understood everything I was going through. Everything I said, they heard. They were my faves to work with. I didn’t feel like a trans girl or a “trans model” at their show. I just felt like a model.

Wait, so have people said stuff about your walk?

Yeah! Think about the fashion industry in the ‘90s and 2000s. There was a period where supermodels had personalities. They were household names because of who they were or how they walked. After that, there was a total whitewashing. Models didn’t have to know how to walk. They could have two left feet, but as long as they could just walk down the runway they’d get the job. It’s a slap in the face! One of my favorite things I’ve ever been told about my walk was, “Ummmmmm, could you make your walk less fabulous please?” I was like, “Do you think anybody ever asked Naomi Campbell to make her walk less fabulous?

How do you feel now that the crowd-funding’s almost over? How did you feel when you started it all those months ago?

Going into it, I felt very hopeful that things would come together. I always knew in my heart that it would happen, but that still didn’t take away the fact that it’s been such a scary, tiring, exhausting, confusing process for me. It’s been really hard to explain to people over and over that this isn’t something that has to do with beauty. It’s me returning to myself and existing as myself for the first time in my life. I have the right to do that, and it’s people’s responsibility to provide that for people that they’ve put down. I’m feeling great now, happy and relieved. It’s been really beautiful to see people rally together to make my dream come true. It’s an indescribable feeling. I’m so grateful. It’s going to change my life. I’m going to finally be able to be myself and look in the mirror and see what I’ve been seeing in my head since I was a baby. My life is absolutely going to start right now.

Do you have any advice for black trans femmes or anyone else who wants to break into fashion?

Set a vision for yourself, no matter how crazy or wild or intangible or far away it may seem from where you are right now. Set that vision, and chase it. If you want it, go get it. Do everything in your power to keep that vision in your line of sight. Don’t let anybody blur that vision. You’re the only one that can make it happen for yourself. No one else is going to do that for you. There are so many things pushing up against girls like us. Just remember that us being here is changing the world. Our existence is so beautiful and so powerful and so necessary. We’ve been around forever. People have looked up to us throughout history. We’re healers. We’re teachers. We’re pillars of community. We’re everything. We’re magic. We have to find the strength in us to help us continue fighting. I would just say thatand keep your girls close.

Any upcoming projects you want to talk about?

Yes, actually. With the help of some friends at Discwoman, Bearcat and Frankie Hutchinson, I’ll hopefully be going on a little European DJ tour a month after my surgery. It’ll be my first time in Europe, so I’m really excited. I just decided on the name of the tour: The New Face Who Dis? Tour. It’s going to be really fun. I’m not going to say anything about anything else I’m working on. I’m just going to wait and gag all of you.

I cannot wait to be gagged.

Me either, bitch! Me either.

This interview has been edited and condensed.