The fishnet-clad brawler known on the indie circuit as Effy seems to think so. Residing in Tallahassee, Florida, Effy (née Taylor Gibson) is one of the few openly queer pro-wrestlers currently working in the industry today. He currently holds two titles: Fest Wrestling Heavyweight Champion and Christian Championship Wrestling United States Champion, and is gaining a steady fanbase and respect from his peers. Effy is out to prove that there’s a place in the business for LGBTQ people and provide legitimacy to a frequently disrespected medium along the way.

“Wrestling is the last form of improvisational, physical theater in the round. And it is pure art,” Effy tells INTO in a shockingly candid phone interview. “Literally, wrestling is drag! It’s over-the-top exaggeration. Obviously for [queens], it’s exaggeration of femininity and on our end it’s masculinity. Where I’ve taken my character, I’ve played with both ends of that. They say, ‘Oh, here’s this boy in fishnets’–and then I beat people’s asses.” 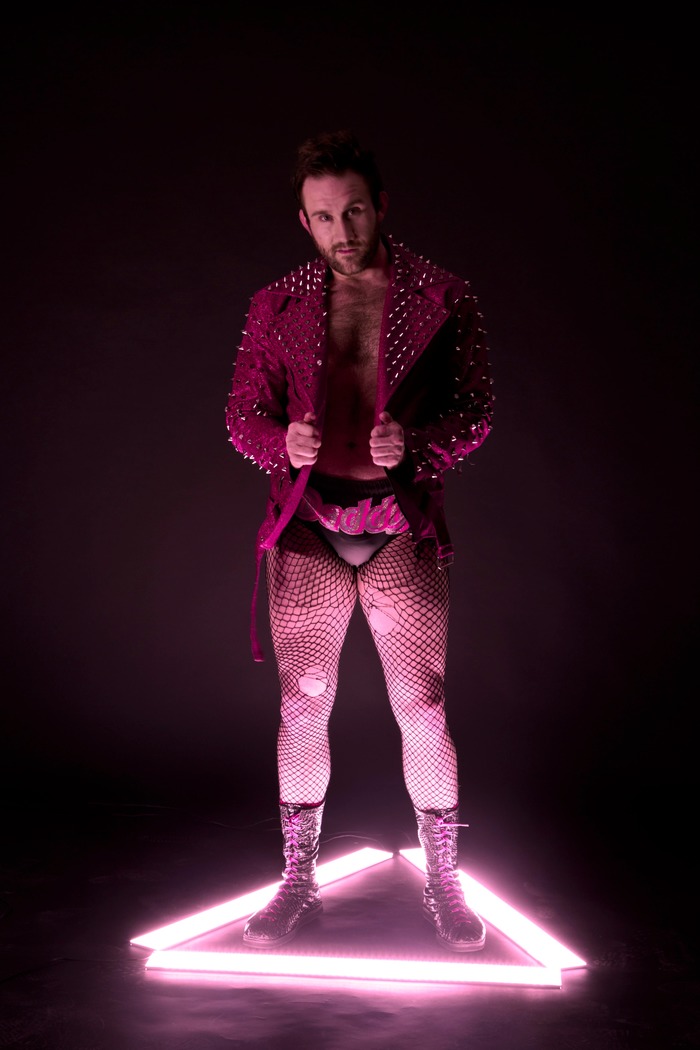 Gibson’s journey to wrestling was one of self-discovery. After dealing with assorted substance abuse problems, Gibson discovered new purpose and a clearer sense of his own identity through the intense physical pain of the squared circle.

“I was drinking all the time. I was smoking weed all day, every day. I was doing whatever pills I could get my hands on. I didn’t usually say no to anything. One day I took, like, eight hits of LSD, went mental in my house, ended up in the hospital–and went stone cold sober from there. I was like: hold on. You gotta do something with your time,” Effy reminisced. “Turns out getting hit in the face is probably twice as fun as getting drunk.”

And it was through the creation of the character of Effy–and newfound sobriety–that the performer began to come to terms with his own queerness.

“When I got sober, that was the first time I had come out to my parents. They’re really cool with it now, but at the time I had to find that confidence,” Effy says. “In the wrestling world, the character has always been queer. I was struggling to find who I really was–in college I was fucking some dudes, fucking some chicks–but it was never a public thing that I owned. Once I had that Effy attitude, it was like discovering myself for the first time I hate the term pansexual but it’s probably the most accurate. I’m currently in a monogamous relationship with a man.”

Although the character of Effy and his IRL identity were originally envisioned as separate, Effy now sees how the two have become increasingly entangled.

“In real life I’m a normal guy, I’m working at a moving company, and I’m running a business and then I become this character I see pieces of Effy slipping into the way I handle business or customer service. I see the business side slipping into how I handle myself getting booked or appearances. I’ve become this one big messy, cloudy, murkiness of Effy and Taylor.” 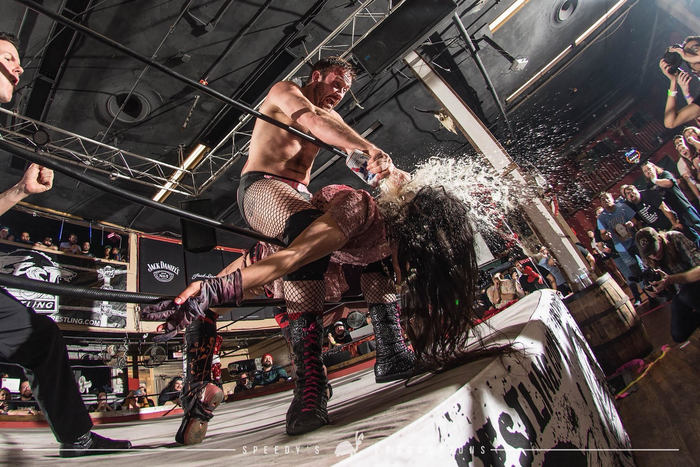 Although wrestling has a reputation as a redneck form of entertainment, research on the sport has shown audiences to have surprisingly liberal attitudes. That being said, Effy quite unsurprisingly encounters hatred even when he’s playing a face (wrestling slang for the good guy). The creation of Effy has been a self-conscious experiment in shifting the attitude of audiences.

“I’m coming out in this glitzy outfit–I’ve got this glamorous studded jacket, I’ve got fishnets on. I’m acting a little feminine. But my straight up style in the ring is submission-based and brawling. I’m trying to hurt people. I’m coming up with moves that look really painful I do a spot where I find the most homophobic person in the show and I pull a dollar bill out of my sweaty trunks and I say, ‘Baby, I’m parched. Go get me a beverage’–I’m playing with their perceptions.”

The moment that Effy arrives on the scene is certainly a politically perplexing one. Pro-wrestling has a long history of homophobia, most apparent in the late 90’s and early 2000’s Attitude Era, during which intentionally sleazy and purposefully shocking storylines were the norm. And while the WWE had announced in 2016 that it was in meetings with GLAAD to improve the lack of queer representation in the company, they would later go on to release one of two openly gay performers on their roster. Rumors are now currently circulating about the company writing a gay storyline for one of their most popular stars, Finn Balor, who has not made comments disclosing any information about his sexual identity to the public. Meanwhile, a tag team in Japan known as The Golden Lovers (comprised of stars Kenny Omega and Kota Ibushi, who have offered nuanced statements about the overt sexuality of their gimmick)have garnered massive popularity, as has current Ring of Honor World Champion Dalton Castle, a beloved straight performer playing with queer stereotypes.

It’s understandable that actual, openly queer people are suspicious of the intentions of these performers and writers.

“There are people out there playing queer characters who are not queer and they’re making a lot of money off of it. It disturbs me that people are out there making money off of queer identities and then they get to go home to their completely heteronormative life. Maybe it’s like a movie and you get to play whatever character you want, but it does feel skeezy to me,” said Effy. 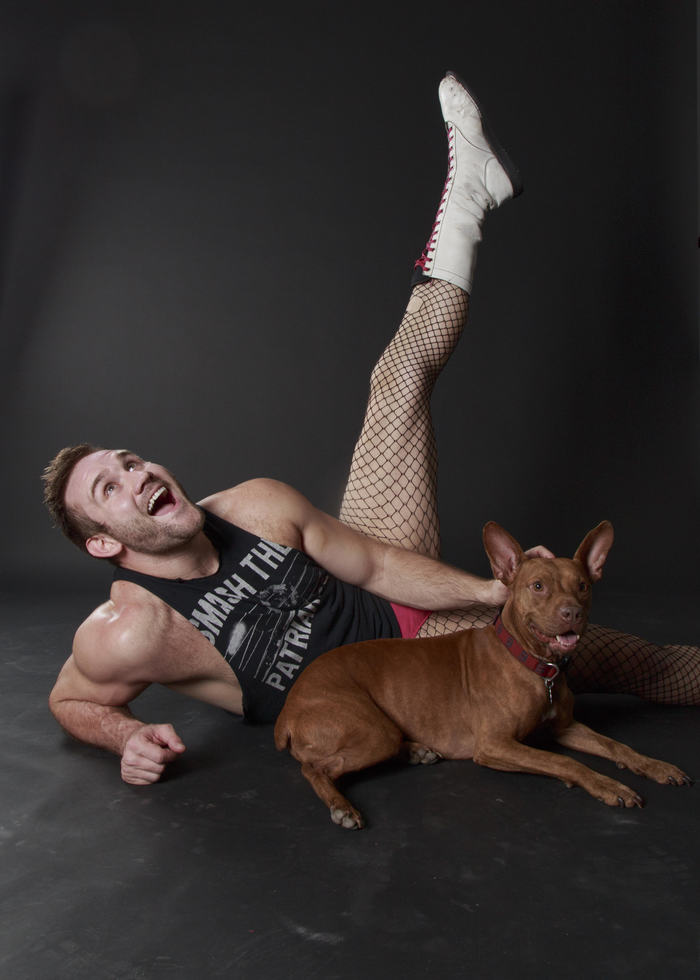 But Effy hopes that with his openness and presentation helps inspire a new generation of both viewers and rising stars.

“I’m the queer Stone Cold Steve Austin! I’m an ass kicker. I don’t give a fuck,”he says. “I’m fully unapologetic with my character Not to make myself sound like some soldier of queer change, but in a lot of cases there are fans who wouldn’t feel comfortable cheering for me. But once they see that I can take the hate and the vitriol They get this confidence in them too. If he can handle it, I can handle it, too. It’s really exciting to see, especially in a town that you know voted for Trump.”

“We now have the opportunity for a a queer wrestler to be probably the biggest star in the world,” Effy continues. “People are looking to a lot of queer heroes and LGBTQ stars as voices that are more powerful because we’ve dealt with shit and we’re not taking it anymore. Even a straight audience can connect with that.”