Making Utah a safer place for LGBTQ youth begins with a hug, according to a group of Mormon moms.

Taking shelter under a canopy, representatives from the support network Mama Dragons greeted attendees of this weekend’s Provo Pride festival with cookies, stickers, and free hugs. This was the group’s second appearance at the yearly event, which is held across from the Mormon Temple in the city center.

The juxtaposition is striking: LGBTQ people and allies embracing under a tent covered in rainbow streamers as the world’s most visible symbol of Mormonism looms in the background.

The significance isn’t lost on Mama Dragons. Neca Allgood, one of the organization’s earliest members, has volunteered at the Provo Pride hugging booth for two years. She told INTO that LGBTQ people often approach the tent because they lack support in their own families and communities.

“We have a few people who come to the hugging booth and you give them a hug and they say, ‘I wish my mom hugged me like that,’” she said. “It just breaks your heart.”

In November 2015, LDS church leaders announced that the children of same-sex couples would be ineligible for baptism until they turn 18 and disavow their parents’ marriage. At least 30 LGBTQ youth took their own lives in the three months after that policy was released, as Mama Dragons has claimed.

Those numbers have been contested by the Utah Department of Health, but other surveys appear to support their estimate.

As of 2016, suicide was the leading cause of death in Utah for young people between the ages of 11 and 17. The suicide rate among this age group has tripled since 2007, although the survey does not single out LGBTQ-specific data.

The nationwide network first began as a thread of Mormon moms offering support for a young person who was in a precarious situation. The thread rapidly grew as increasing numbers of parents kept chiming into the discussion, craving a place to talk about issues they may not have space for in their local congregations. 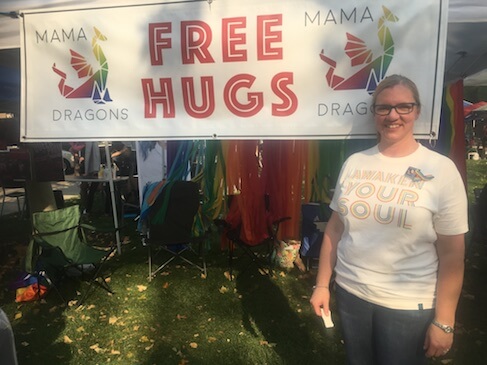 One of the 10 people involved in the original Facebook thread, Allgood counts herself as one of the founding members of Mama Dragons. She immediately recognized its necessity.

When her son came out to her as transgender in 2011, Allgood said she didn’t have other mothers to reach out to.

“I never want another mom to feel that alone,” Allgood said. “I want another mom when their kid comes out to be able to find resources to answer their questions to figure out what they need to do to help their kid.”

Allgood had to find those resources on the internet. When her son initially told her he was a lesbian, Allgood browsed the website for Affirmation: LGBTQ Mormons, Families & Friends — a support group for LGBTQ members and former members of the Church of Jesus Christ of Latter-day Saints — looking for answers.

Browsing the website led her to a revelation. Allgood clicked on the “transgender” tab, a page offering resources for trans people and their loved ones. “Yeah, this is my kid,” she thought to herself.

Realizing he didn’t have a name for what he truly felt inside, the next day Allgood explained to her son what that word meant.

“For him, that was all the light bulbs going off,” she remembered. “I know you’re not supposed to out your kid, even to themselves, but you can’t identify with what you’ve never heard of.”

Allgood likes to joke that her son “spent one day as a lesbian.”

Far too many LGBTQ youth, though, aren’t lucky enough to have a parent help them come out. Many young people face being ejected from their homes by their families and forced onto the street. Nationally, an estimated 40 percent of queer and trans youth identify as either queer or transgender.

The group began tabling at Provo Pride last year, and they also make frequent appearances at LGBTQ events across the state — everywhere from Salt Lake City to Ogden. One person Knapp recently met burst out into tears when they embraced.

“We sat down and had a conversation for about 10 minutes,” Knapp told INTO. “Her entire family isn’t supportive. She’s only out to a few people because she’s afraid.”

Knapp can relate to the struggles that other families and their parents go through. When her son originally came out to her six years ago, she claimed that images of Matthew Shepard flitted through her mind. She didn’t want her son to have a “target painted on his back” — to be hated because of who he is or who he loves. 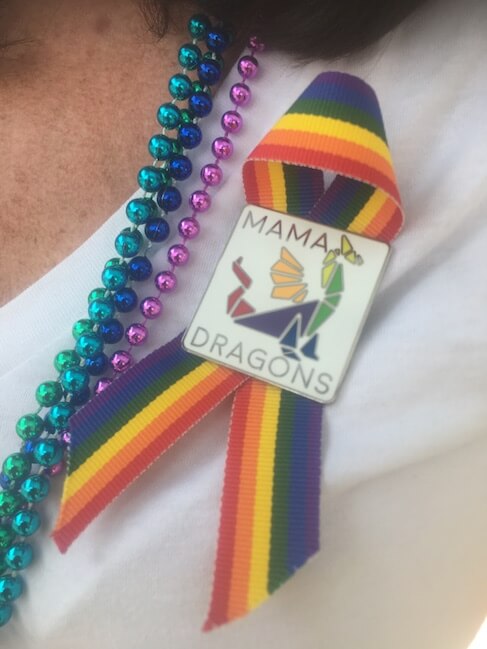 Nonetheless, Knapp recalled feeling an overwhelming sense of love for her child. Although she wouldn’t find the group until years later, she said she became a Mama Dragon in that moment.

“I didn’t know I could love him more than I already did, but I felt this tangible increase of love for my child,” she said.

Although Knapp joined Mama Dragons prior to the church’s controversial policy on LGBTQ membership, she said spreading a message of love to LGBTQ youth is arguably more important now than ever before.

“It’s about letting LGBTQ youth know there’s someone out there who has their back,” she said. “We love you, we see you, and we’re here for you—even if it’s just a hug once a year at Pride. Hopefully that’s enough to help people keep going, hold on, and know they are valued by somebody.”