Lesbians are always on the go; whether we’re hiking with our emotional support dog named Buffy, strolling through Whole Foods 365 and telling strangers when and why we stopped eating meat, or standing in line for a Banks concert — we need a good shoe to support our everyday needs. And now, it’s finally here: Vans is giving us a shoe that was seemingly created exclusively for lesbians, and it should be required by law that all queer women buy them.

Vans, a brand that has always belonged to skater boys and former Warped Tour lesbians, has collaborated with NASA to give us an extremely Sapphic shoe line. The Space Voyager Collection commemorates 60 years of space exploration and innovation at NASA, and as we know, queer women fucking love space. Show me one woman who has kissed a woman who doesn’t have a NASA shirt and/or has been to space camp. The line is modeled after the original space suits, with four different variations, all of which is guaranteed to evoke a strong sense of NASA nostalgia. They’re the perfect holiday gift for the queer lady or non-binary person in your life.

The firecracker low-tops are ideal for your extremely extra queer friend. They’re space suit orange, and have the old school NASA logo on the side, as well as a Velcro American flag on the heel. These shoes are brighter than the men you dated before you knew you were gay’s futures. They’re perfect for standing in line at the movies to see The Favourite, only for a man to approach and say, “I couldn’t help but notice you’re wearing NASA shoes, did you know that Apollo 11—” then you can shove your pointer finger against his mouth and say, “Yes, I know Apollo 11 landed the first two people on the moon, I’m not an idiot.” Then, we he insists he wasn’t mansplaining, he was “just trying to make conversation,” you can say, “Did YOU know that Russia sent a woman into space 20 years before the US did? Or that the first woman to walk in space was also Russian?” And when he stares at you like, “Uhhhh,” you can remind him why it’s important for us to topple the patriarchy and stop upholding systems of oppression based on race and gender or we’ll never be able to compete as a modern world power.

Anyway, this shoe is really good for that. 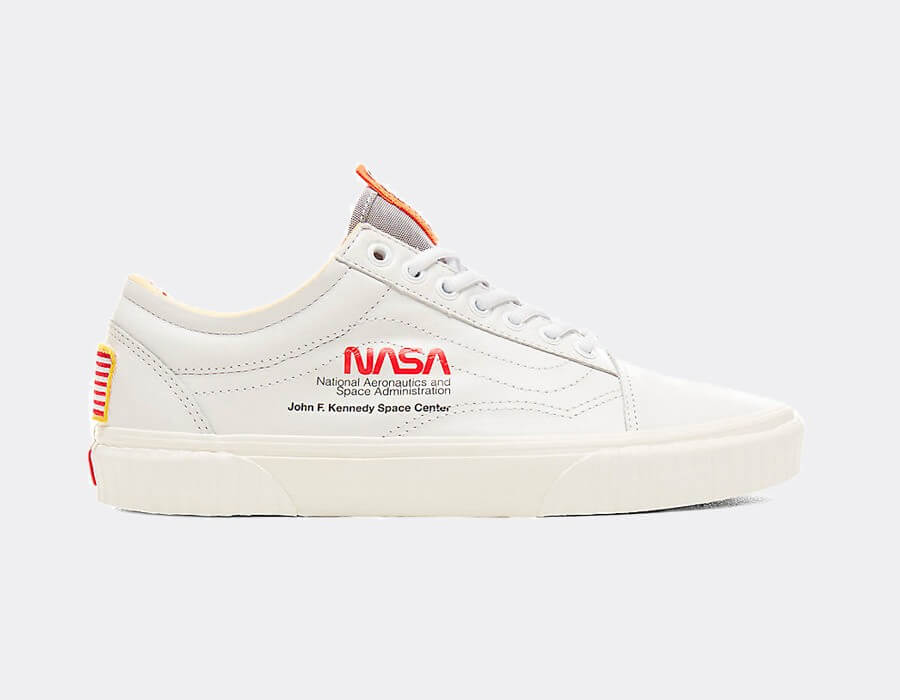 If you’re looking for something a little more low-key, the Space Voyager Old Skool shoe also comes in white. It still says “Space does not belong to you, men,” but it’s less in your face. Sometimes, the best approach for a debate about space and the patriarchy in line at the movies is a more muted one. Men typically respond better to a more agreeable tone, because when women raise their voice literally at all, or even use big words so that it sounds like they’re yelling, when in reality they’re completely monotone, men get super defensive. So, if you’re looking to reel it in a bit, strictly for the purpose of protecting baby men’s feelings and having a constructive conversation about 1960s space politics, the white Space Voyager Old Skool may be for you. These shoes are white with hints of orange on the tongue, inner-shoe, and NASA symbol. They’re like a chic dad-sneak — they’re comfortable and work with every outfit without sacrificing an ounce of lesbianism. These shoes are also really good for marching in pride parades, being the hot lesbian counselor at space camp, and chilling at home while engaging in discourse about intersectional feminism on Twitter. 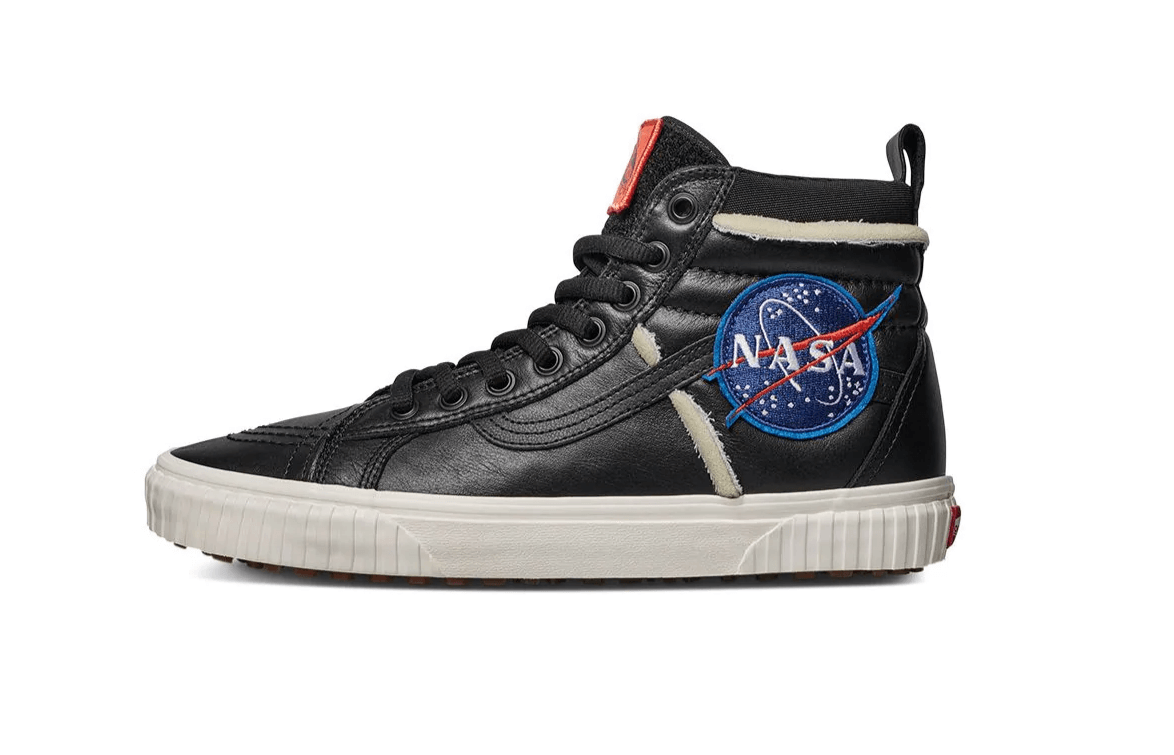 This black and white high-top shoe says, “Step on Me, Sally Ride.” If you don’t know, Sally Ride was the first American woman in space, and lived a very secret life as a queer woman at a time when being out and proud wasn’t an option — especially as the feminist face of a government program. The queer astronaut was in a relationship with a woman for more than 20 years before she passed away from cancer in 2012. Ride was a hero through and through and changed the cultural narrative for women in the workforce, and after her long stint with NASA, dedicated her life to helping young girls get and stay interested in science. Why am I telling you all this? Because Sally Ride is 90 percent of the reason that I care about NASA, and I will honor her legacy by being a bullheaded feminist lesbian, proudly striding through every organic supermarket or cat adoption center wearing my Step On Me Sally Vans, and holding hands with my girlfriend. She couldn’t, so we must. 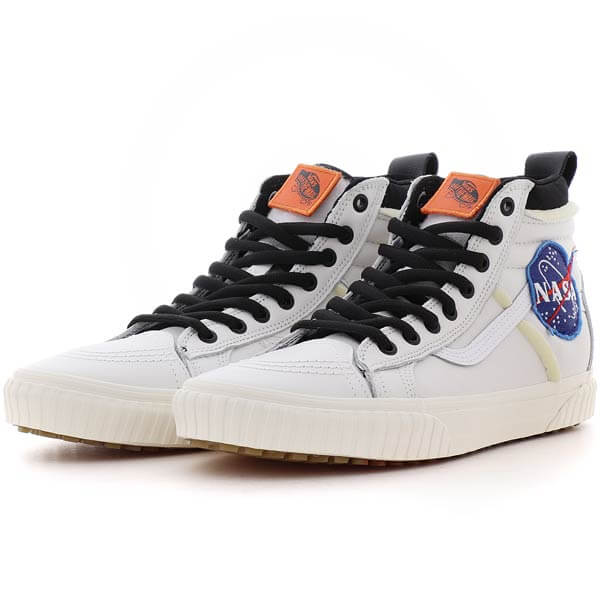 Did you know Sally Ride’s sister was also gay? Did you know Sally left her husband, who was also in her class in the space program, to be with her partner of 20+ years? None of this has much to do with this specific shoe, but I wasn’t done talking about Sally Ride. The point I’m trying to make is: space is canonically gay, at least for women. But the shoe: These white high-tops actually look like straight-up space boots. Just like the black high-tops, they have an original Velcro NASA patch on each shoe, as well as a Velcro firecracker orange Vans patch on the tongue. I won’t dance around it, or formulate some long-winded scenario about toppling the patriarchy, or flex my encyclopedic knowledge on queer icon Sally Ride. Instead, I’ll keep it simple: These shoes are perfect for being gay and liking space.

Purchase this lesbian footwear, and other Space Voyager paraphernalia (T-shirts, anoraks, and more) on Vans.com.