Call Me By Your Name is an intimate (if explicit sex-shy) love story about two men, Elio (Timothée Chalamet) and Oliver (Armie Hammer), who fall in love in northern Italy. But if you believe distributor Sony’s UK Twitter account, the explosive love story they’re advertising is not a same-sex relationship at all but a heterosexual one, between Elio and erstwhile fling Marzia (Esther Garrel). 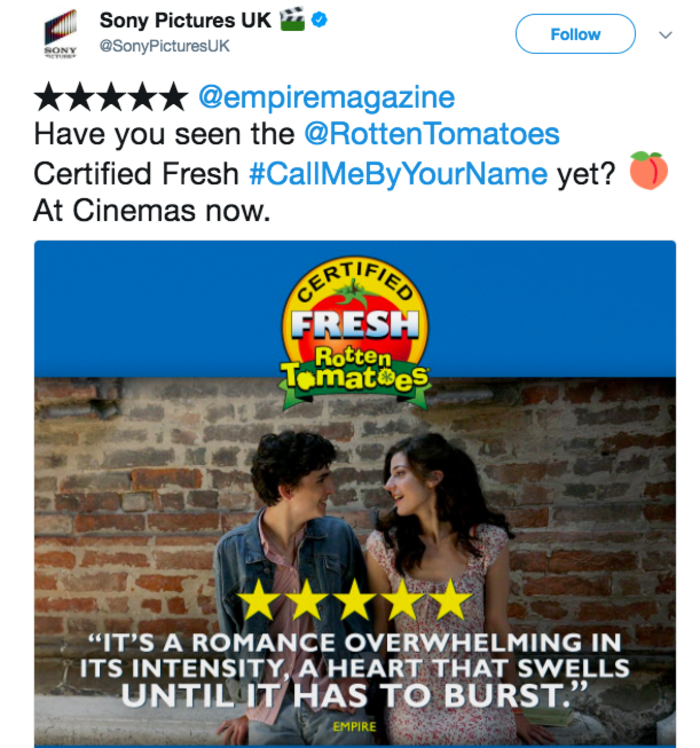 Though Elio and Marzia do have a minor relationship in the film, it is hardly the “overwhelming” romance promised in the ad. The now-deleted tweet was using a quote about the Elio-Oliver relationship out of context over an image of a straight couple.

The ad did not go over well, to say the least.

Why are you making it look like a heterosexual romantic film? Erasure in advertising to appeal to the mass market, hm?🤔

Though the tweet was only up for a few hours, the reaction was huge in gay circles. It represents not just one bad marketing choice, but reflects years of hetwashing that make queer stories and characters seem more straight.

In interviews, director Luca Guadagnino has emphasized how “universal” Call Me By Your Name’s love story is in essence, displacing the sexuality of the story in favor of appealing to a larger audience. The same issue hit movies like Moonlight, too. Hell, even this weekend in theaters, Thor: Ragnarok downplayed Valkyrie (Tessa Thompson) as bisexual by cutting a scene out of the film.

It may have just been one quickly deleted ad, but Sony UK’s tweet was about much more. Call Me By Your Name is a queer story, and deserves to be sold as one.