No Sesso’s ethos extends far beyond the runway.

In Los Angeles, spaces where queer women can go out and feel safe are in short supply and even legendary bars for QPOC are disappearing. Plenty of local recurring queer nightlife events claim diversity as a marketing ploy while indulging the pleasures of only one letter in the LGBTQ acronym. Enter Pierre Davis. 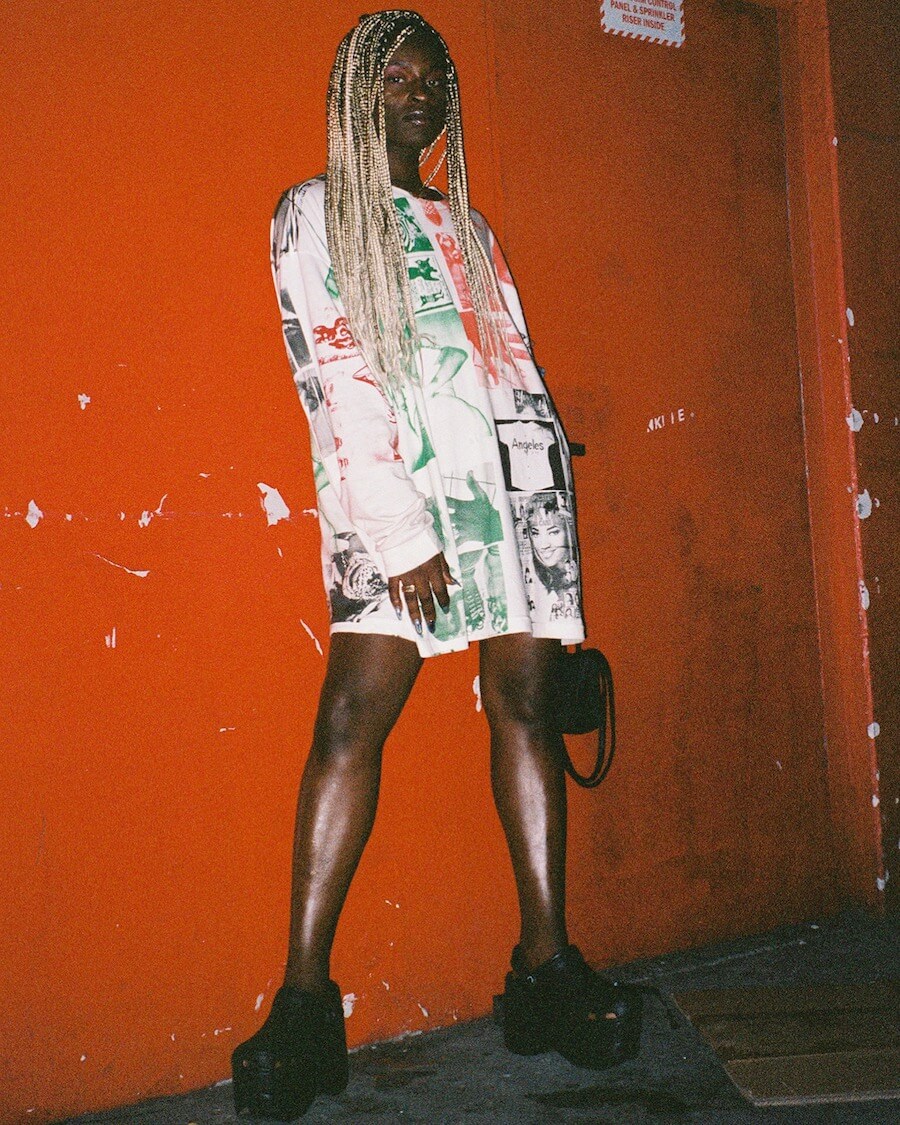 Davis created the fashion house No Sesso in 2015 to empower people of all colors, shapes, and identities through fashion shows, parties, workshops and more. This month, Davis will likely become the first trans woman ever to present a collection at The Getty, one of the world’s largest art institutions, while simultaneously throwing one of their hallmark fabulous afterparties.

Ahead of presenting her capsule collection with close friend and collaborator Kelsey Lu, Pierre Davis sat down with INTO. She eschews designer wear and greets me in casual garb. In true Scorpio form, she’s laser-focused on getting ready for an upcoming fashion show, yet lacks any signs of fatigue.

How many times have you been featured in Vogue this year?

I would say No Sesso has been featured so many times. Out of all of The Vogues, like Vogue Italia, Teen Vogue — all the Vogues: at least ten times already. Something crazy like that.

Where are you from?

Born in South Carolina. I’ve lived so many other places since I was 9 because my dad was in the military. Then I moved to Seattle where I finished high school. I started studying fashion design at the art institute.

Why did you come to LA?

I chose to move to LA for fashion design. When I was living in Seattle, I visited LA once. I really liked the city. I went to the fashion district and fell in love. I said, “I want to move here to pursue design.” I then moved here in 2014. No Sesso was a brand by the end of November 2015. 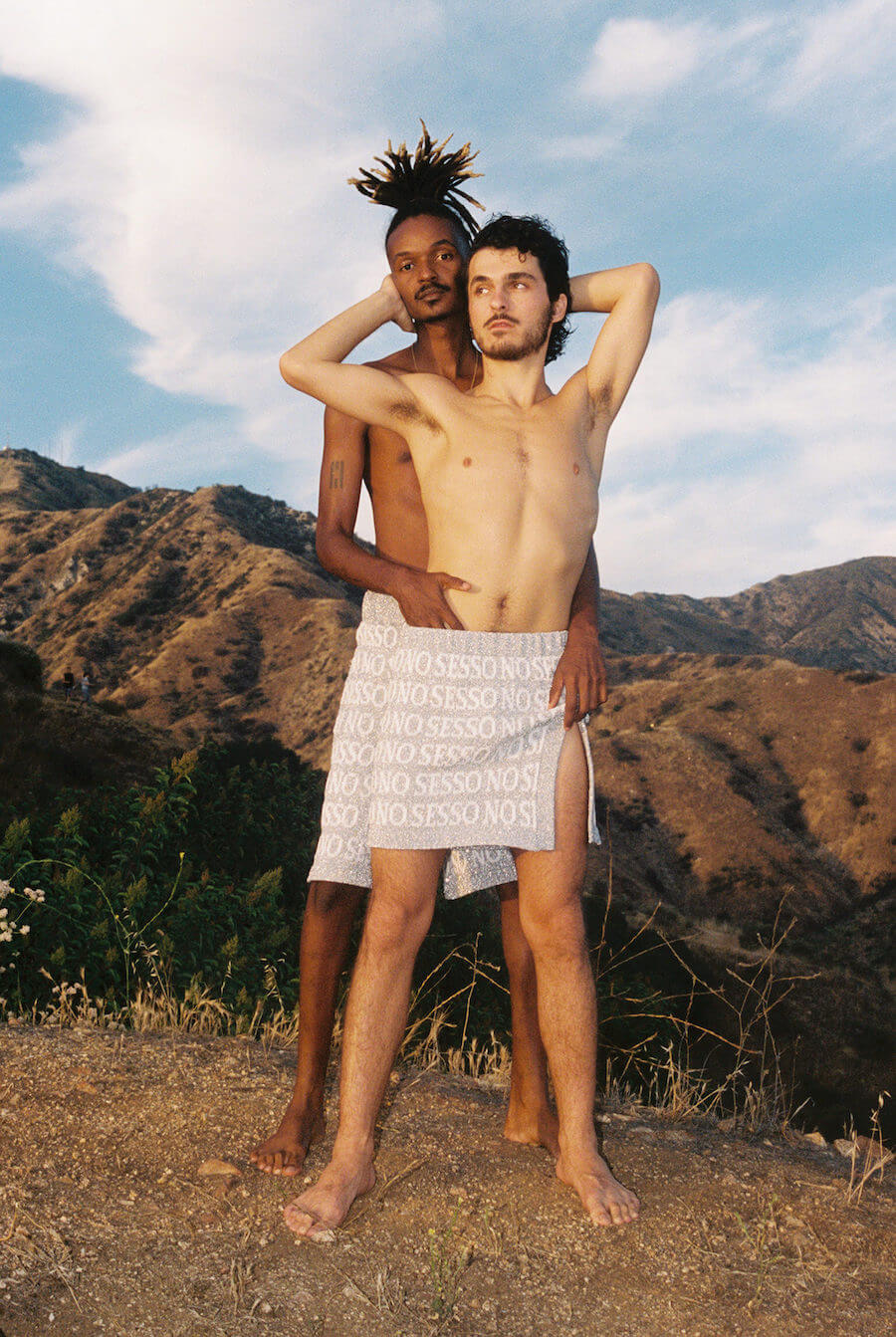 The photographer and stylist for this shoot, the models, the teams and models for your shows and your campaigns — everyone appears to not only be a friend of yours but a carry as well. What is it about you that makes you a lightning rod for beauty, talent, and all things fab?

I’ve actually described the energy and the turnout for your parties with that same word: effortless. Everyone is so effortless and authentic but also so glam and so cute.

I feel like our parties are definitely safe spaces for people to come out and like, let it out without people judging or without bothering their carry. Everyone’s living their life. That’s what everyone wants to do when they go out. It’s cute to like be social and stuff but sometimes you just want to rage and hang out with your friends. I feel like that’s what No Sesso parties give. Everyone is just able to come out and come together and you know you’re gonna be safe no matter what. You don’t have to worry about any kind of hate or homophobia or transphobia. Everyone is going to be there for you and if someone is fucking up, it’s so easy for them to get the door.

Would you call your friends and collaborators your chosen family?

Totally. Yeah we are definitely family. We chose each other. Yeah it’s so funny how we all crossed paths and made what we do happen.

What was your inspiration behind this shoot with Clifford Prince King and Malcolm Robinson?

Well, there are two inspirations behind this shoot. Me and Clifford were chatting because — I believe Clifford shot a little bit of the collection before it was done. Like a private show of what I was working on at the time. Basically, he shot the lookbook for the collection. So he was able to experience all types of levels of where the inspiration behind the garments were, ya know? He really fell in love with the “trade pants” and “trade dress” that I made. 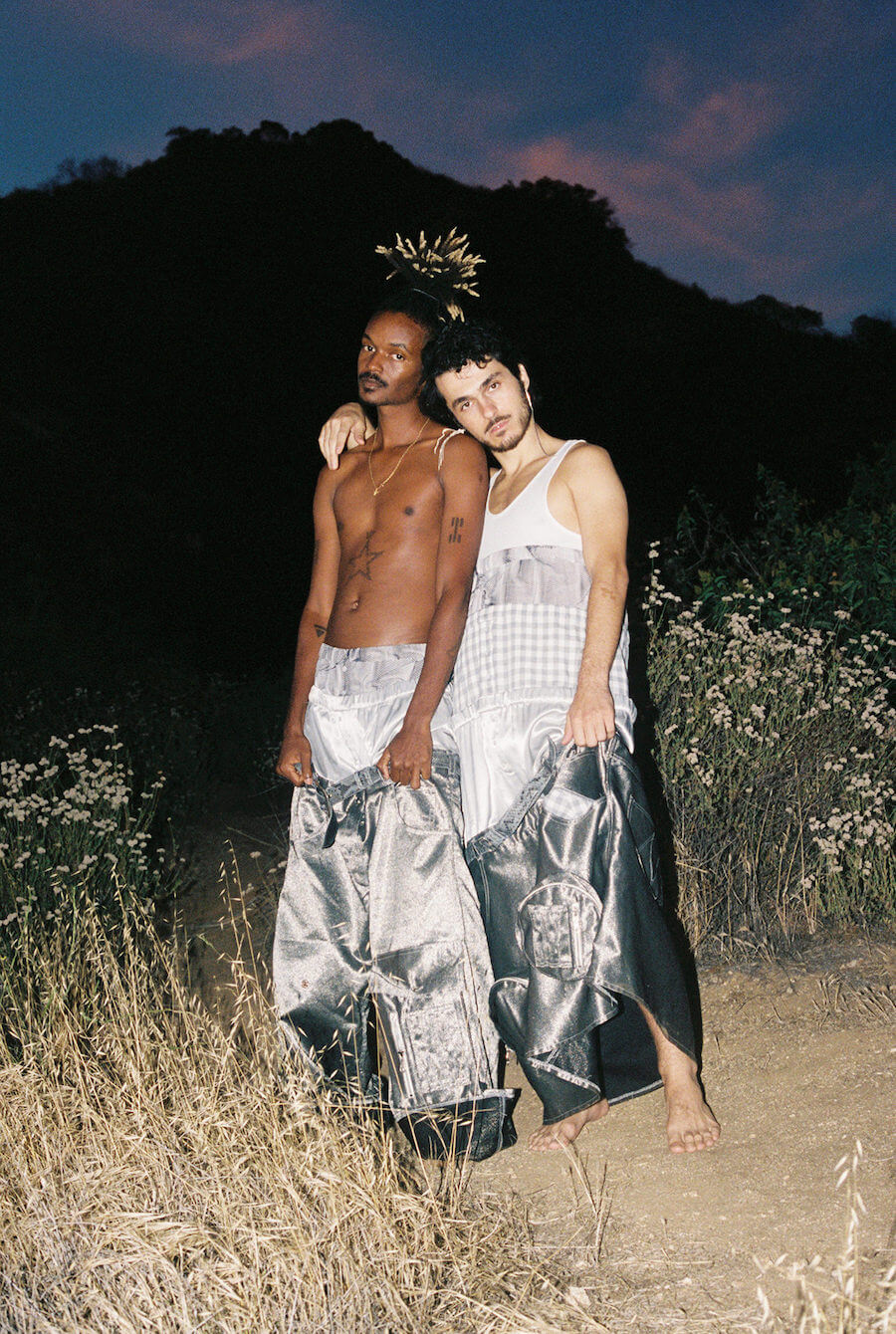 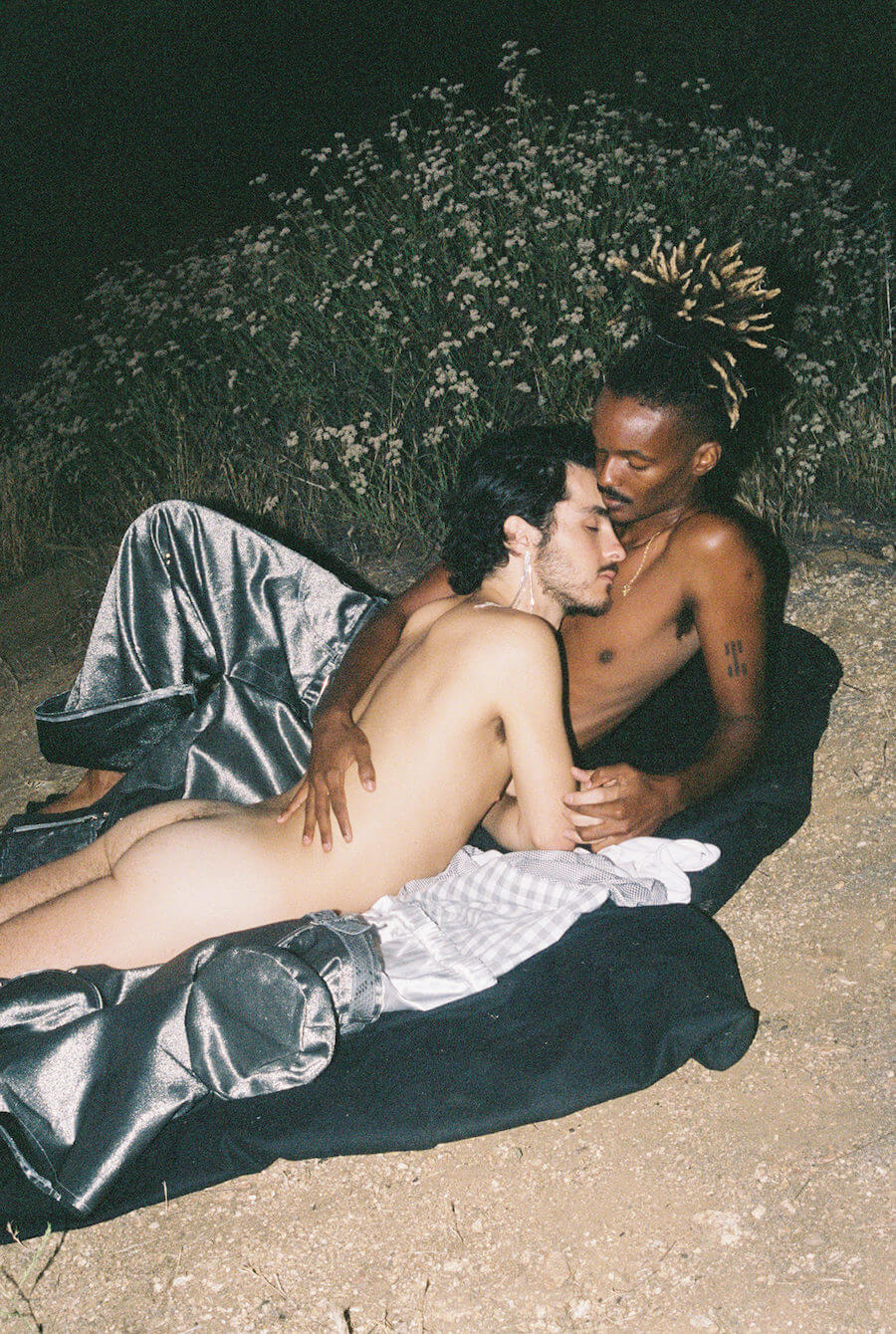 Are those the official names of those garments?

Yes. We made this look and the inspiration was like, a real trade boy wearing these pants and maybe like a femme boy also wearing the dress — looking like a couple in a sense. So that was some of the story that we started playing off of at first when we knew we wanted to shoot it together. And we also wanted to work with a couple that was actually in love. Someone that was in a relationship already. So you can see it in the imagery.

I mean, anyone can act and make that happen, but there’s also a different emotion when you feel compassion for someone else and you’re photographing them. You can act that out but when it’s real, it’s real. We wanted to work with Niko and his boyfriend Junior. We just thought that they would be the ultimate couple and so cute and I love seeing them together on social media. We just thought it would be the perfect fit. So I gathered up a few pieces that I thought would be iconic and we had Malcolm do most of the styling. I laid a little bit of it out and then I let Malcolm go off from there. With the hair —and the accessories which we used in the actual No Sesso runway show. It was the same collection but we made sure that it was telling a different story.

We just like, came together and made magic. Malcolm is an ongoing collaborator. We’ve worked together so many times and every time, it’s always major. He does all of the hair for the runway shows. I wouldn’t have it any other way.

Authenticity is really important to No Sesso. 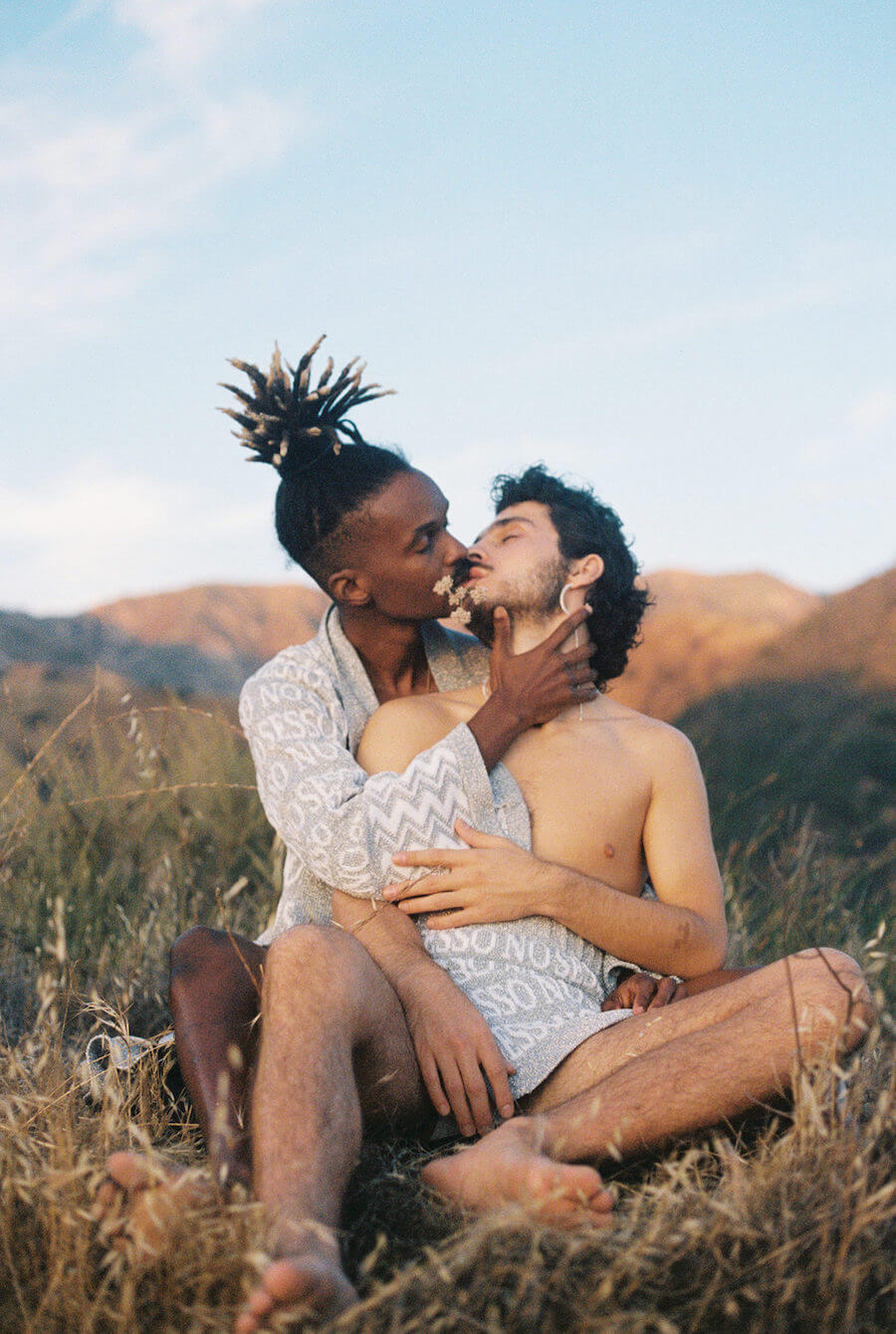 You were initially based in Seattle before relaunching in LA and being in operation as a brand again since 2015. Meanwhile, you’re throwing these fashion shows and parties that are cultivating something so special here in in the city. How do these gatherings make you feel, seeing your work and your friends coming together?

It’s such a positive experience and I’m like mad happy about it. I’m happy that everyone sees something in my work that they can relate to — that’s the most important part: bringing all of the elements together and people together and everyone being able to identify and to see what we’re producing. It’s very all around when it comes to the parties that we throw, the fashion shows, the art exhibitions. Everything that we do is full circle and it’s a lifestyle. We’re just bringing like-minded people together so that they feel safe because this world can be so harsh. Suicide is so intense right now. We just want to let people know that we’re here and doing whatever we can to bring our community together. So they know that they’re not alone. That we’re all going through this together. Especially when you’re identified as this subculture. It’s so tough out here.

What does this togetherness mean for you and your mental state?

Cultivating this togetherness, making safe spaces is all we’re really trying to do. Make a place for our homies to kick out and chill with other people who are into the same shit as us. I feel like it’s very important that black trans women and POC women and POC LGBTQ…and everyone feels like they can come together with us at No Sesso and feel safe. All the bullshit is put to the side and everyone is able to live. So many people say that they want to do it, but are they really doing it?

Are they really accomplishing what they set out to do at the end of the day, in an authentic way?

What are your thoughts on the current state of gender and representation in fashion? How would you like to see LGBTQ be represented in fashion?

OK well, I just feel like the current state of fashion — like yeah you’re starting to see more POC people and more queer people represented in fashion — but I also feel like it’s real trendy and not everything is authentic. I’m not coming for every brand but I do feel like there’s some marketing that might communicate, “we’re here for queer people,” but you’re just wanting their money and not really there for anything they have to do. I feel like it just needs to be a little more authentic. If you fuck with these people —  if you care for these people, for us, then really be about it and not just down because it seems trendy right now.

Fashion still has a long way to go and we still need to improve garment sizes — we need fab garment sizes that fit everyone. There’s still so much work that needs to be done. Don’t get me wrong — things are changing but I feel like it’s the subculture and the underground designers who are changing fashion and these bigger brands are able to see what’s happening on social media and they’re able to get hip because you know… they have people working for their brand who are just like, on the internet all the time. So people are able to tap into the culture and what they should be doing.

I don’t want it to be only in the month of June. Do you notice that a lot in fashion? It’s when they’re able to market it. It’s not an all year round type situation.

Yeah, people really come out of the woodwork come June. People are just all for the gays. Flying their rainbow flags suddenly. But where were you in April? 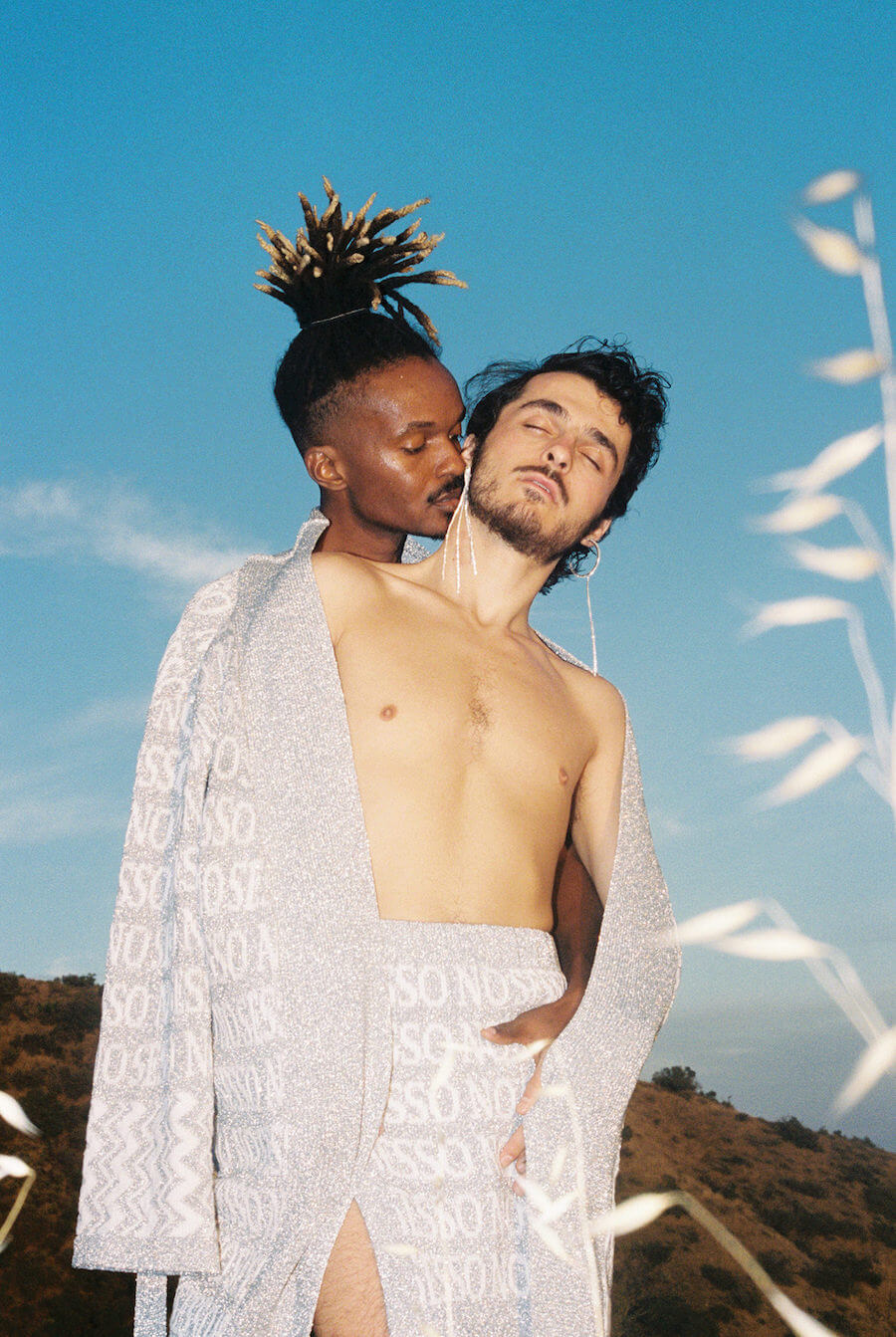 Tell me about how you and Kelsey Lu came to be friends and collaborators.

We have a lot of mutual friends first of all. We have a lot of people who run in the same circle. We would always be liking and commenting on each other’s stuff and then she ordered some pants online. We were basically just online friends for a really long time. Then we happened to be at the same function. Then we just meet and we’re like, “Oh my gosh… girl, what’s up? Finally we get to see each other.”

From there we’ve been nonstop. I’m such a huge fan of Kelsey Lu’s work. We’ve been working together — I’m a big fan of her music and she’s such a force and so talented and so fucking cool and sweet and just so humble and we can just talk for hours about things and just like — I don’t know, we just vibe out. She’s a big inspiration behind a lot of the stuff that I design. I listen to her music a lot and can’t wait for her album to come out.

What can we expect of your collaboration together at The Getty?

Fierce. Magic. It’s going to be something that you’ve never seen before. It ’s going to be incredible and you would be a fool to miss it if you’re in LA. 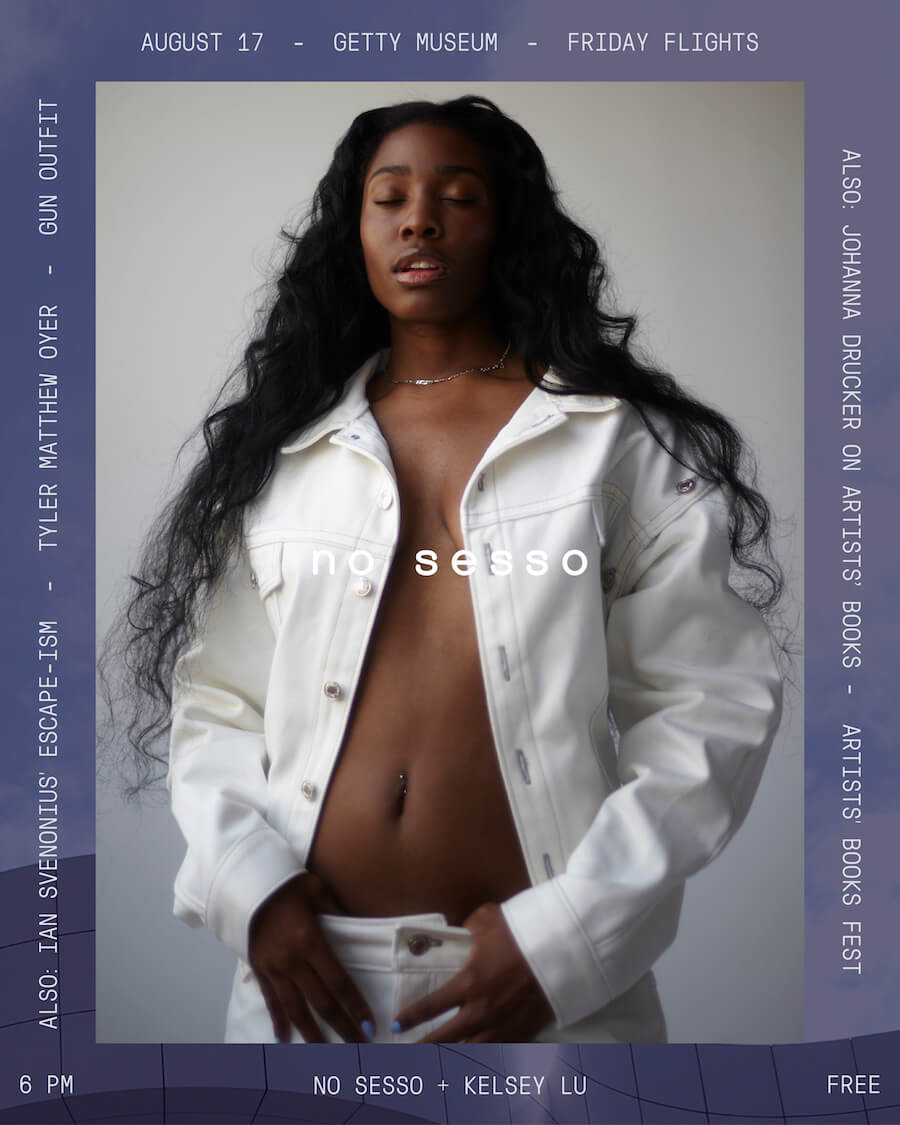 In past interviews you’ve touched on the symbiosis between music and fashion. You’ve collaborated with Lu, SZA, Kelela — so many greats in music. Who’s someone you would like to see wear your clothes that hasn’t yet?

Beyoncé. Lauryn Hill: A fashion icon. Obsessed with her. Erykah Badu has worn No Sesso already… yeah. I love Junglepussy. I listen to her often while I’m designing. I would love to see her in No Sesso. I’ve already worked with bbymutha. I’m a big fan of hers. I guess like, all of the fierce girls, pretty much. Come through! 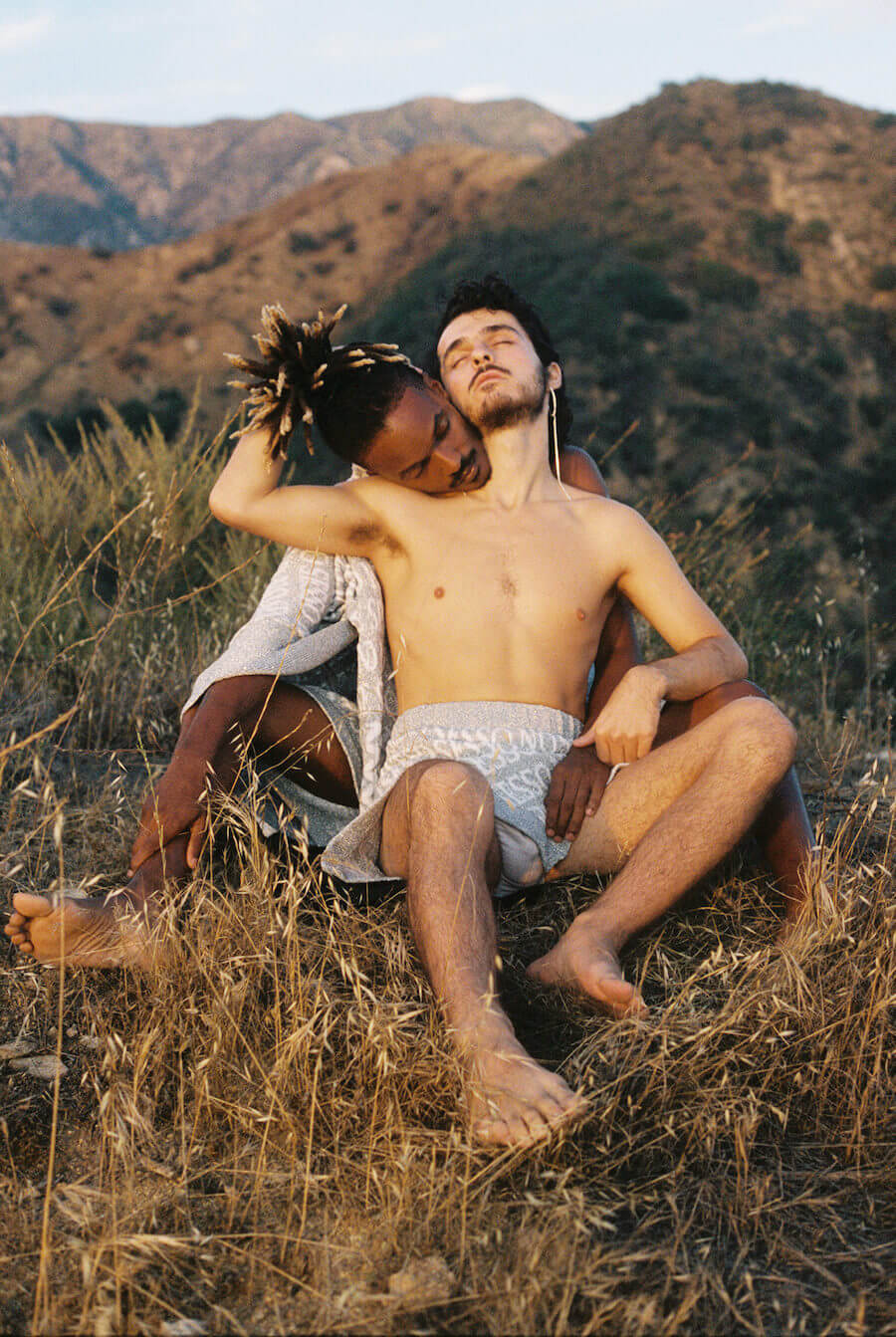 All garments by No Sesso.