In 2015, Georgia South and Amy Love – also known as Nova Twins – took a vacation to rural Wales, where they spent time screaming words at one another across vast expanses of greenery in the middle of nowhere. These words eventually became lyrics to the infectious, attitude-soaked “Bassline Bitch,” the first large-scale example of what has now developed into a signature sound.

Driven by grimy, distorted bass lines and vocals that switch between melodies and screams, the Nova Twins’ unique sound has been described by many in genre-specific terms that, put simply, don’t fit. The pair is difficult – if not impossible – to categorize musically, and that’s kind of the point.

Alongside developing their own sonic blueprint, the duo have been bringing their high-energy live shows to crowds worldwide as well as working on new music and, refreshingly, rejecting the single-single-album formula that record labels have long relied on. Here, they talk touring, a lack of imagination in the mainstream music industry, and how to truly get into the “give no fucks” mood on stage. 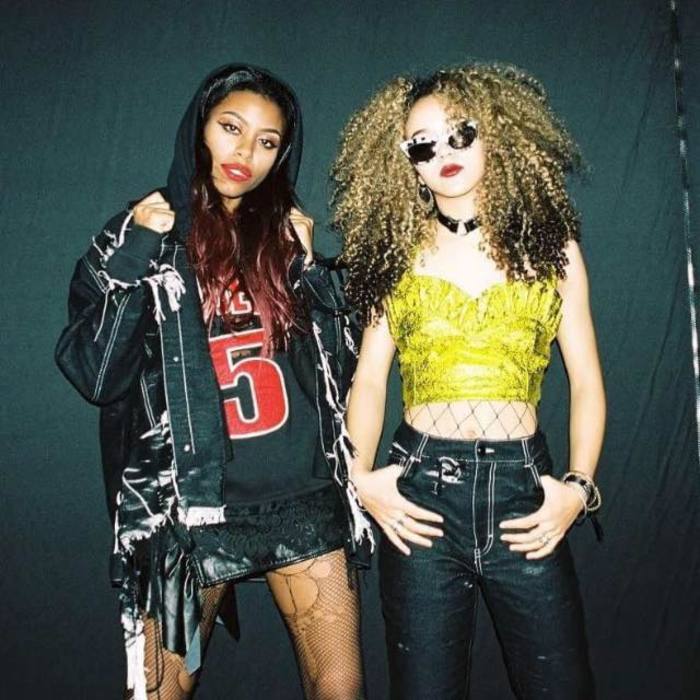 Can you tell us a little about how you met and when you decided to start the band?

Georgia: We’ve been family friends for well over a decade now, so we became sisters while we were growing up – we officially “became a band” on Amy’s birthday!

Your music is pretty difficult to categorize – what kinds of artists were you listening to growing up?

Georgia: I listened to a real mish-mash of stuff growing up – everything from Mariah Carey’s Unplugged album to Daphne & Celeste and Stevie Wonder – I would always play Innervisions in the car. Then, in my early teens, I started to really love N.E.R.D, Justin Timberlake, Timbaland and Beyoncé.

Amy: I went through different phases. I grew up in Essex then later went to college in London, where I got introduced to all different types of music and cultures. It ranged from Toni Braxton (Mum’s influence!), old-school garage and pop music to bands like the New York Dolls, Mc5, Betty Davis and everything in between, which I guess is why we have such a mixed sound!

You’ve previously talked about wanting to be genre-inclusive – do you feel like the industry still relies too much on labels?

Georgia: I find it strange that some people in the industry don’t want to take risks anymore. They want to play the quick money game.

Amy: Yes, although there are interesting bands coming up through the underground as opposed to the “machine” – grime is a good example. The commercial scene is suffering from a lack of imagination. The truth is that people don’t all want the same thing – if there were more diversity in the mainstream, more artists would have the chance to explore their potential. We always see the same people making the same music, and nobody dares to step outside of their box. If they do, they’re “niche,” or alternative.

“Bassline Bitch” was the track that really kicked off your career. How long did it take to write and record?

Amy: Not very long! We recorded it as a demo, heard it and then decided it may as well be the first single. We went outside, filmed footage on our iPhones and then that became the first video!

Georgia: I remember writing most of it on holiday in Wales. We were screaming: “You know what time it is something Bitch,” across some fields in the middle of nowhere! By the time we got home to London, it was finished. 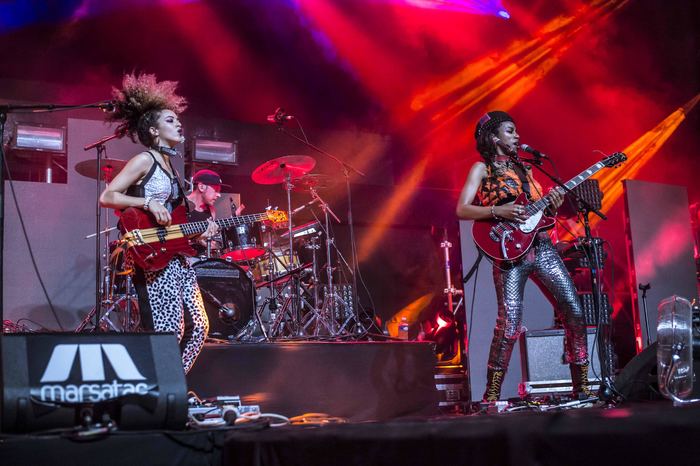 You’ve been touring a lot since then – any pre-show rituals?

Amy: I can’t eat before gigs, I’ll just vomit! I need apple juice, our special finger shake and the occasional swear word followed by a 10-minute warm-up. I need to get into my “give no fucks” mood!

Georgia: I just jump up and down a lot, stretch my legs and ankles and do a pre-gig handshake with Amy. I get really suspicious if we don’t do the handshake!

Are there any particularly memorable gig experiences?

Georgia: Transmusicales, which will always be like a dream to me! I really enjoyed Festival Art Rock in France, because it was the end of the tour and I was so tired I went into my super hyper mode and ended up playing football with our drummer for ages before we played the set. Then, we went straight on – the crowd was so fun, they were running and jumping off of our stage. I love that kind of stuff!Amy: I agree, those two gigs were special. Going to South Africa and Reunion Island this year was also another highlight, the views were stunning and I had the realization that our crazy little band had taken us there!

Amy: I agree, those two gigs were special. Going to South Africa and Reunion Island this year was also another highlight, the views were stunning and I had the realization that our crazy little band had taken us there!

There’s still a lot of talk about the difficulties of being a woman in the industry. Is it a conversation you’re bored of, or one we need to keep having?

Georgia: We should definitely still be talking about it, but I do get frustrated when the only interview questions are about feminism and not the music. That’s almost the opposite of feminism – nobody is asking guys in bands these questions, but they’re the ones that need to be the most engaged in it if we want to see the change. It’s also boring to just see one type of woman, one mold We need more diversity in terms of women in the industry.

Amy: The conversation keeps getting interesting – just when you think you’ve tackled one thing, another pops up. Each woman has a different experience, whether that’s good or bad, but I agree with Georgia. It shouldn’t be the only thing women are asked but, at the same time, we want to break the mold and show that the idea of only one type of female representation is delusional and damaging. I want to highlight our differences and celebrate them!

You’ve been praised a lot for your style, too. Is it something you consciously think about?

Amy: It’s just another way to express ourselves. We make our clothes because it’s fun and creative – we wear them when and how we like. To us, our clothes look like what the music sounds like, if that makes sense?

Georgia: Yes, our music inspired our clothes – we were never satisfied with what was in our wardrobes at first, because we thought it just didn’t match the way we felt on stage. We just decided to customize nearly everything we own so it was exactly the way we liked it.

Musically, what are your plans for the rest of the year?

Georgia: We’ve been working hard on our next EP, and we have a new video coming soon. We’ve explored different areas of our Nova sphere – we think it sounds more Nova than ever! I hope people love it as much as we do.

You’ve perfected a real signature sound – is that something you want to take forward into an album, or do you want to experiment more with different genres?

Amy: I’m not sure if I want to make an album yet? I like the idea of releasing EPs more often as you can play around with concepts, and people listen differently now, too. The album will come when people are ready for it.

Georgia: I think we’ve definitely come to terms with what our sound is, but I also think we’ll always keep experimenting with different sounds, just like we have on our new EP. We’re constantly evolving, and we’re so grateful to have amazing people supporting us and joining us for the ride.