The first time I came out I was sitting amongst friends on the beach in San Diego my first summer after starting college. This was not a vacation, and this community was by no means a standard group. This coming out was certainly not a story of self-acceptance. Rather, confessing my “struggle with homosexuality” for the first time to a group of only cis men while on a mission trip organized with evangelical intentions, coming out for me was less the removing of a burden and more the reapplication of chains.

A “struggle with homosexuality” was how my religious community, Campus Crusade for Christ, referred to my sexuality at the time, and because my identity was tightly interwoven with my religious upbringing and my varied, but always evangelical, religious communities, this was how I began to identify myself. As one would expect, when you see your sexuality not as something beautiful or interesting or commonplace about yourself, but instead see it as something you struggle against, you construct an enormous amount of self-hatred because you are unable to stop the gay desires that have plagued your otherwise contented religious life.

But my summer in San Diego wasn’t the beginning of the self-hatred and despair that came to be a commonplace emotion for me. Growing up in the deeply conservative Assemblies of God Christian denomination – a sect colored by individuals speaking in tongues, casting out demons, and hosting church nights four to five days a week – I had internalized a language regarding my queer desires that has left deep marks, scars, on me even to this day. The traumas caused by years of being raised in religious communities labeled “mainstream” don’t disappear overnight and can have lasting impacts on the ability of a queer person to build relationships, fall in love, and feel comfortable in their own skin.

As well, the traumas caused to queer people by religious upbringings is, unfortunately, far more common than we often think. Even in the first episode of this season’s Queer Eye, interior designer Bobby Berk describes his refusal to enter the church building he is meant to redecorate, recounting his experiences growing up attending a conservative Christian church, and, in particular mentioning the ostracism from his religious community he experienced upon coming out. Bobby details how the church was his life – how more days than not each week he spent at the church and how he spent hours on his knees at the altar pleading to whoever would listen to alter his sexuality. When he came out, this foundational aspect of his life simply dematerialized. 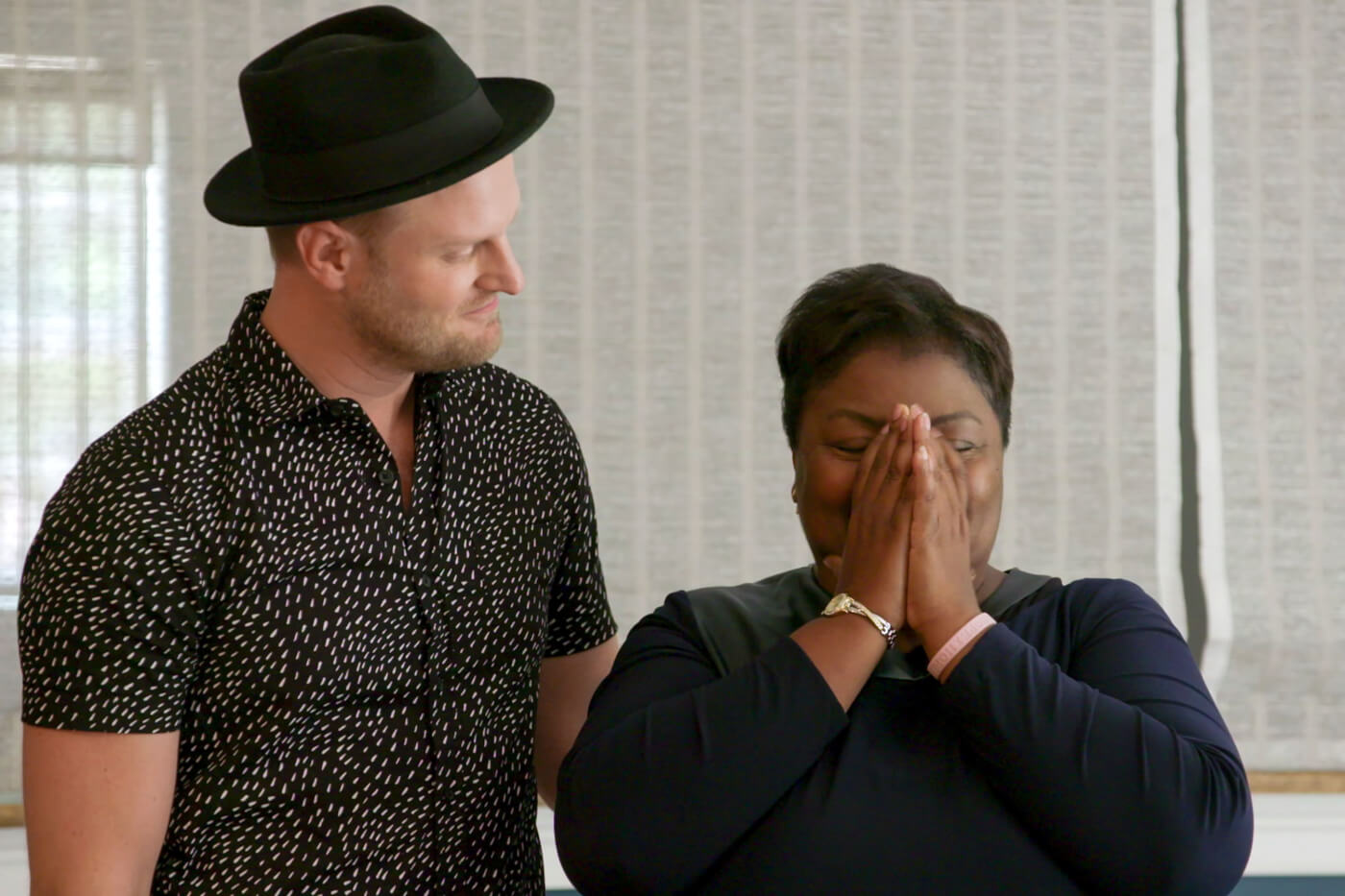 In the end, Bobby left his church, his small community, and his love for singing behind as he came out, as he learned to embrace his sexuality. But as anyone who has come out in the midst of a conservative religious community can attest, accepting your sexuality in spite of these conditions is no small task, and these struggles don’t end once you’ve come out.

This explains, then, why there exists a strain as Bobby recounts his experiences to Tammeye in the first episode of this season of Queer Eye. In what has become traditional Queer Eye style, the producers give us a scene in which the seemingly irreconcilable differences between Tammeye’s religious convictions and Bobby’s personal convictions are synthesized through active listening, acknowledgment of misunderstandings on both parts, and a shared agreement to move forward with open minds.

For its part, the show does take important steps in acknowledging the ways in which some religious folk has done harm to queer people. Tammeye, in recounting her own initial rejection of her son after his coming out, acknowledges that there are many Christians who don’t “live like Jesus” and who instead judge and mistreat queer people. Tammeye follows the story of learning to accept her son with a line given by many queer-affirming Christians, announcing that these individuals don’t represent her religion. Bobby responds amicably to these admittances of wrongdoing and acknowledges that he has been guilty of writing off Christians-at-large on the basis of his past experiences.

The show concludes with a large embrace between Tammeye and Bobby after Bobby has completed his redesign of the church’s community center. After the hug, Tammeye reminds Bobby that most Christians do not believe the things the members of his church believed nor do they want to treat queer people in a negative manner. 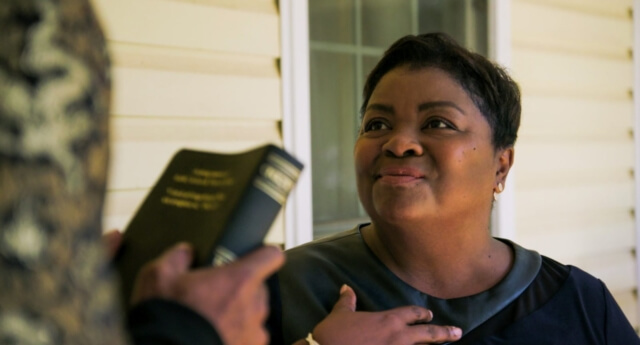 Such a statement is, first and foremost, statistically inaccurate – a point that ought to be made clear by the show’s producers. Pew reports that only 35 percent of evangelical Christians in 2017 believed homosexuality should be accepted by society, up just 1 percent since 2016. And while young people, generally, are much more supportive of the acceptance of queers in society, only 47% of white millennial evangelicals believe queers should be accepted by society. Put more bluntly, less than half of evangelicals under the age of 30 believe we should accept queer people. Not accept marriage equality. Not accept other policy positions. Less than half believe queers should simply be accepted.

But Tammeye’s statement about Christians, more importantly, belies the fact that the traumas caused to queer individuals raised in evangelical communities do not disappear if queers and evangelicals lay down their arms, “give a little” in terms of their respective positions and listen to each other.

The assimilation often and subtly advocated for by the cast of Queer Eye, which often asks members of the queer community to consider the roles stereotyping can play in preventing them from building bridges with other non-queers, fails to understand that this assimilation does nothing but paint over the decades of trauma caused by Evangelical Christianity’s treatment of queer people.

Growing up queer in evangelical, Christian communities often means telling yourself day-after-day that you wish you could be someone you aren’t. It means learning to hate an element of yourself – your sexuality – because you can’t stop being queer, and, more importantly, because you can’t stop this thing you very well might be condemned to a life of romantic solitude and, worse, an eternity in a spiritual hell. These concepts are not mere abstractions for many queers living in evangelical communities; when the avoidance of hell is the moral benchmark to which you aspire, being presented with a queer sexuality can you leave you frustrated, scared, and in fear of even remotely acknowledging your own desires.

The internalized self-hate that comes from this is a direct consequence of the homophobic actions advocated by many people in Christian, evangelical communities. And this internalized self-hatred does not go away for queer people who reach self-acceptance and leave these communities just because we meet a nice Christian who tries to convince us that not all Christians intend to harm queer people. Nor do sayings such as “hate the sin, love the sinner” do anything other than cause even deeper self-hatred by queers in these environments.

In order to address the harms caused to queer people by anti-queer religious communities, these two communities cannot merely sit down and listen to one another. Such an assimilative stance ignores, first, the social and political power religion currently holds, especially within the small, rural communities similar to the those the Fab Five often enter and, further, the reality that this trauma requires years of therapeutic and self-reflective work to overcome. The fact that Bobby wouldn’t enter Tammeye’s church was not an example of someone having a stubborn, immature stance rooted in misunderstandings of Christianity (an inherently victim-blaming view). Bobby’s refusal to enter a church had much more to do with the trauma caused to him by being rejected, as a young queer person, by himself and by the only community he knew at the time.

The storyline surrounding the intersections of religion and queerness cannot be presented as a simple narrative of misunderstanding resolved through active listening. Rather, Christians, and specifically those belonging to denominations with especially homophobic stances, bear the burden of fixing those mistakes – not the queer people who, rightfully so, have formed stereotypes out of a need for self-preservation. Apologies for problematic doctrine and inhumane actions are a good start, but material resources for the victims of these traumas and social resources oriented towards demanding evangelical leaders stop preaching hate and the removal of these voices from political actions must be the end goal. And the burden cannot be bore, in any way, by the queer victims of evangelicalism actions.

Until evangelicals confront themselves first and address their actions and associated consequences that continue to traumatize queer people, there will continue to be queer people who are unable to engage with religious people and institutions in meaningful ways. For many queer people stereotypes about religion and Christians and Christian beliefs exist in order to protect us from the same institutions that spent years beating us down and traumatizing us. Kudos to Bobby for addressing his traumas head-on and for designing a community center for a woman, and a community, that greatly needed it. But kudos, also, to those queers who, after years of self-hatred rooted in an inability to alter their sexuality, finally learn that the best way to love themselves is to leave their past behind.