(Spoiler alert: Plot details for One Day at a Time’s second season follow.)

The series’ second season is the first one to be released under the Trump presidency, and the U.S.’s tense social climate permeates several episodes as the family is dealing with anti-Latinx racism and queerphobia. Quite simply, what puts ODAAT head-and-shoulders above its sitcom peers is its characters. No other show on devotes so much attention to the interior lives of Latinx people, whether they be male, female, queer, straight, young or old. And it’s currently the only show showing a multiplicity of Latinx experiences under the current administration.

In the very first episode of the season, “The Turn,” Penelope worries about her son, Alex, getting in a fight at school. Turns out someone teased Alex by yelling “build the wall,” a reference to Trump’s (racist) pet project wall at the U.S.’s southern border. Alex, and the rest of the Alvarez family, are not Mexican, but Cuban.

What follows is an 11-minute scene depicting the complicated reality of Latinx life in America right now. The show’s resident white man, Schneider, can’t believe that racism still exists in Southern California, and the Alvarez women educate him on their realities. The discussion ranges from some thinking Latinx people are too loud to comparing racial slurs they’ve had flung their way. The women make veiled references to Trump without ever invoking his name. 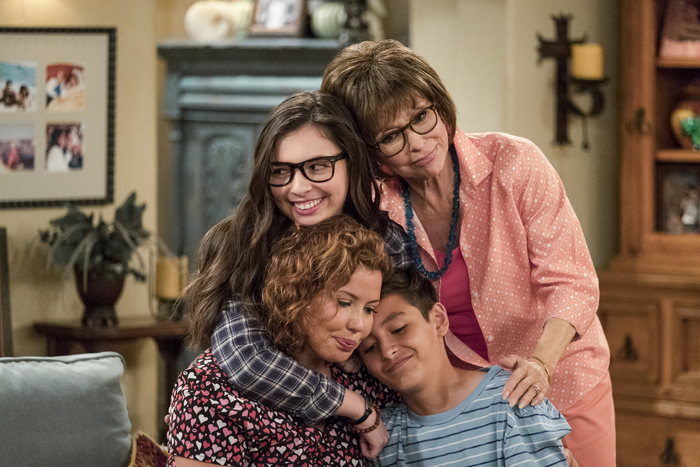 Aside from being insightful and unique in the current television landscape, the scene is also sharp-tongued and hilarious. When Penelope says “beaner” isn’t that bad of an insult because Cubans, Mexicans, and Puerto Ricans have great beans, Lydia says, “Cubans have the best beans. We are the true beaners!” And, when Lydia’s character has to drum up the courage to say the word “spic” as an example of a horrible word she’s been called, the other characters shrug it off as an “old school” slur that carries less generational weight among younger Latinx people. They even discuss passing privilege and who “looks” Latinxall while teenager Elena Alvarez bemoans that she passes for a white Anne Hathaway.

Racial slurs? The politics of passing? These are not usually fodder for sitcom hahas, but ODAAT navigates the topics with the deftness and grace of a Latinx Olympic ice skater. And they’re effective because, for ODAAT, this is just character work.

In contrast, take the uber-political Will & Grace reboot. The stars assault viewers with political quip after political quip like a Murphy Brown reboot (which is also coming!). The reboot, birthed from a secret voting PSA, even moved its entire premiere to Washington, D.C. to announce itself as “woke.” And while it seems a bit off that the characters have gotten so political, it does reflect the American moment: liberals of extreme privilege have felt more incensed than ever by Trump’s presidency.

But Will & Grace treats Trump as a bogeyman figurehead and deals very little with the reality of Trumpism. They have to name check Trump constantly because he’s their main problem. For the Alvarez family, Trump is a symptom, not the illness. 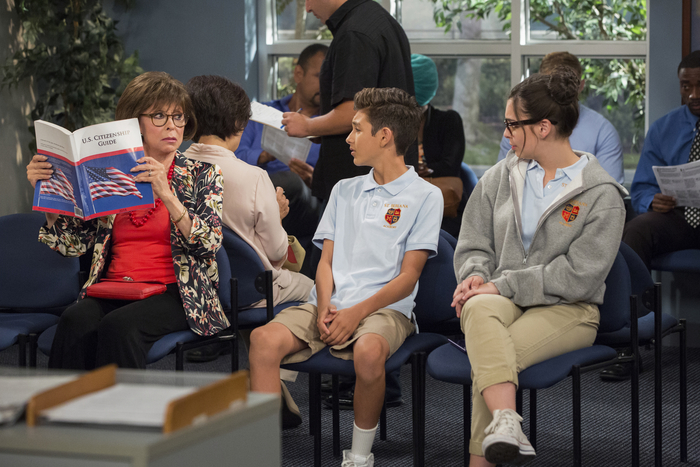 To continue with Will & Grace as an example, the show’s most popular character, Megan Mullally’s Karen, is an avid Trump supporter who regularly quips that the president is, in fact, Making America Great Again. And the writers have gotten an excessive amount of comedic mileage with Karen’s proximity to the president’s inner circle. But this character choice, and the fact that this season erased the previously-canon series finale, only makes the show feel more and more like nostalgic fantasy. By contrast, One Day deals in working-class reality.

One Day concluded its first season by wrapping up the storyline of teenager Elena Alvarez, who struggled all season with coming out as a lesbian. For its second season, the show had Moreno’s Lydia and Schneider, a Canadian ex-pat, become American citizens. It was the ultimate subversive middle finger. While the show pulled no punches in calling out American’s particular strain of racism, it also leaned into the reality that America willand mustchange.