When it comes to working class, queer, Latinx representation on TV, Netflix’s One Day At A Time has excelled at bringing intersectionality to the small screen. The multi-camera sitcom was recently renewed by Netflix for a third season, largely due to a grassroots movement of viewers who not only love the show, but the showrunners’ mission to create more diverse and inclusive content. One Day At A Time was also nominated for a Peabody Award, which honors impactful and enlightening stories in television, film, radio, and online media.

Isabella Gomez, who plays 16-year-old out lesbian Elena Alvarez on the show, along with showrunners Gloria Calderon Kellett and Mike Royce, were at ClexaCon last weekend, where they spoke candidly about some of the decisions they made in Season 2. Alongside LGBTQ topics, the panel focussed on mental health, positive Latinx representation, and where the show is heading now that a third season has officially been greenlit. 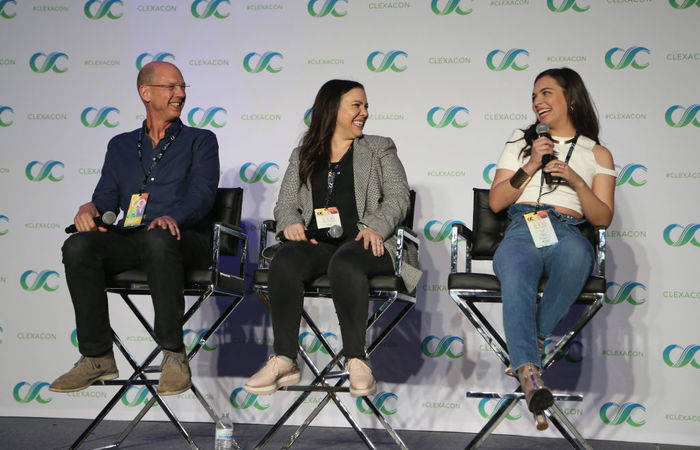 First of all, congratulations on Season 3! Do you have any idea on what might be happening, or who’s coming back?

Mike Royce: We’re not supposed to say anything!

Gloria Kellett: But it’s going to be good.

MR: The second season reflected a lot of things that came the year before that and I think, the same will happen in season three!

What was the decision behind making Elena a queer character when you were writing the show?

MR: There were a number of reasons why. My daughter was coming out kind of at the same time as we were writing Season 1, so I told her “Oh, we’re writing this thingI’m going to be getting material from you!” We hired two gay writers on the staff, so we also drew on their experiences to write this storyline, too. Very early on I wanted to make sure that we talked to Isabella’s parents to make sure that they knew what the character is, to make sure there were no issues and so we were being proactive.

GK: We did need to know if she was going to be all-in, and wanted her to feel comfortable and ask if there were any problems and we could talk them through. But the response we got from Isabella and her family was so warm, and she took it so seriously and wanted so much to portray this accurately and do it right. It ended up being a really loving conversation.

Isabella Gomez: It’s actually really funny that this is the story from their side. My parents and I went in and I had this list of bullet points about Elena’s character; her mom’s a veteran and she’s an activist and we’re thinking of playing with her sexuality, onto the next I didn’t realize how big of a deal it would be, I really didn’t. To me, it was just another aspect of this character. And then they told me the story about them freaking out about telling me! But, no, I think it was really amazing. I had also never seen a young Latina character be LGBTQ on TV.

You also introduced a non-binary character in Syd, Elena’s love interest in Season 2. What was behind the decision to do that?

GK: For me, the initial reason going into One Day At A Time was starvation for Latino representation. So, initially out of the gate, that was what was important to me. But then Mike brought in the LGBTQI+ aspect, Norman (Lear) brought in the veteran aspect, and then as you see how stark all of these communities are, you can’t help but feel like you have to do more. I was also at an event and these kids all said their pronouns and I had never seen that before–it blew my mind. I felt like we were sharing our want to be a community. It felt like the show was intersectional because it was supporting a lot of our wants for representation. It grew from there, and we just loved these characters.

IG: I did not come up with this, but I did think it was pretty amazing, especially because I did not realize what a big deal it would be to have a non-binary character in TV. I didn’t know. I’m part of this generation that’s supposed to be knowledgeable! So I think we forget that unless we teach people these things there’s no way for them to know. So unless we put it in media–because a lot of our information comes from media–there’s no way for us to know and understand. So that was really exciting. 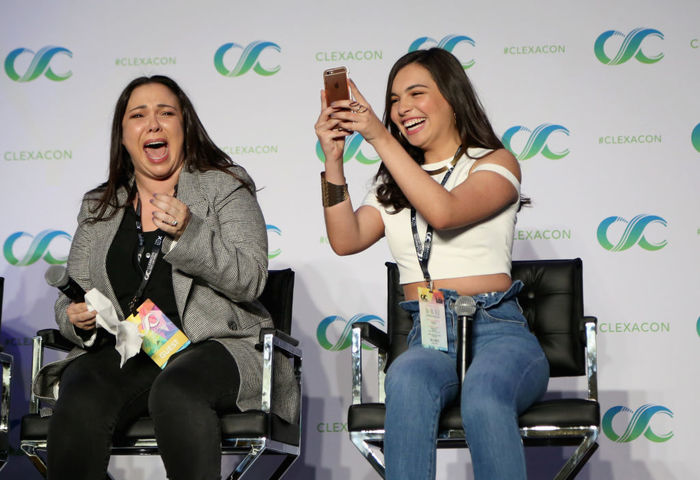 I know the show touched a lot of hearts, not just with its queer storyline but with its realistic portrayals of women of color, especially Latinx women both on and off-screen, because I read an interview with you (Gloria) about the importance of diversity in the cast and in the writers room. Was it easy to achieve? Why don’t more productions do it?

GK: It was easy because of Mike and Norman. It’s true! You need the support from these people, and I was the baby of the three. So I just think that they were so supportive, so there was no resistance.

GK: It’s an issue of representation in terms of actual agents, so you have to first be able to have a conversation before the material gets to us to get people of color, queer representation represented, so when we’re reading scripts we don’t have to do a special ask. That’s an issue that I have, because most of the writers that get sent to us are older white guys that have been around, and they’re great! But it’s a special ask: can we read women please? Can we read people of color please? So we don’t want to be a special ask anymore.

Elena and Syd are geekswhat was the decision to include that aspect of their characters?

MR: My daughter is a huge geek. She’s a huge gamer, into graphic novels. It’s what she’s at school to do so that’s where that’s coming from.

GK: And there’s also a love of sci-fi! Dan Fernandez love’s sci-fi, my husband’s a big sci-fi person so I’m very entrenched in that world.

You mentioned in an interview, Gloria, that you wanted people to give more input about what they wanted to see in future seasons?

GK: Well, what resonates with you? It’s so interesting, I literally said that and was like, “Oh no, people are gonna say this is what we want but we can’t do it all.” But what’s more helpful than saying “I don’t like this” is “I love this,” so at least we know what’s resonating. We only have 13 episodes and 20 minutes, so we can’t do it all, but we do want to hear what works for people.

It’s a great thing to know that creators are listening to what the audience wants.

MR: We are trying to honor the family and their journey’s and if anything else hopefully folds into that–we’ve covered a bunch of stuff and hopefully we can cover a lot more.