It isn’t often that I find I can legitimize someone’s nickname being Daddy. In fact, the list of women (and they’re all women) that can successfully carry the title is very short, and the top three are Cate Blanchett in a suit, Sara Ramirez in a suit, and Mariska Hargitay in anything. Now that Orange Is the New Black has introduced us to Dominga “Daddy” Duarte however, the list has grown by one.

In Season 6 of the Netflix dramedy, Vicci Martinez plays the D-Block charmer who has stolen all our hearts as the pimp that cares. Martinez, who had her television debut back in 2011 while competing in the first season of NBC’s The Voice, experienced the highs and lows of the entertainment business early on and all at once, as she went from what appeared to be a promising career, to an unfortunate and quick decline soon thereafter.

By 2016, Martinez was broke, feeling the blow of an unsuccessful production company that didn’t last very long, and was drinking heavily, which eventually lead her to a stint in rehab. Not long after that, she would get the call that would turn things around for the better.

The Tacoma native comes from “deeply Christian” Mexican parents who weren’t necessarily happy about their daughter coming out at sixteen, and it inevitably drove a wedge between them, but for Vicci, who saw it as detrimental to her songwriting that she was open and honest about her identity, there was no other choice.

“I was the girl that everyone knew that if they liked girls, they could find me and I’d make out with them,” she said. “Like the random cheerleaders that were like, ‘Oh, I’m kinda curious.’”

Unknowingly, this would be a trait that would, years later, get her her first acting gig, as the character of Daddy was described as someone who could turn even the straightest of girls. According to an interview with The News Tribune, she describes her casting experience as surreal, as what lead the casting directors to her was a Google search after having exhausted their resources looking for the right person for the role.

Acting was never a path Martinez had considered taking, and she was nervous about the new venture. To keep things as safe as possible, when developing her character, she decided to blend herself with Daddy’s traits.

“It’s your typical Vicci,” she says of her character, “It’s me. They just call me Daddy.” 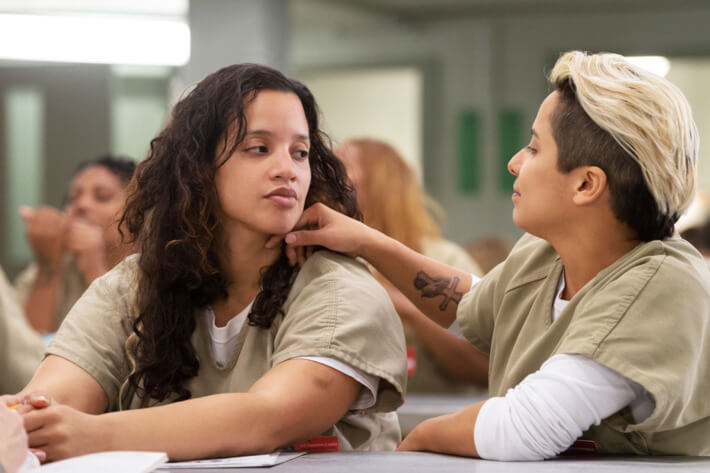 Playing a slightly altered version of herself has worked in her favor, because Daddy is one of the most compelling new faces in Orange Is the New Black this year, an impressive feat during a season where many fan favorites have been written out.

It isn’t starkly clear why Daddy winds up in prison, but given that in the glimpses of her backstory she is seen as someone who specializes in providing rich men with drugs and beautiful female companions, one of which mysteriously dies whilst on the job, one can only guess it had something to do with that.

As Daddy, Martinez is charming and carries herself with the swagger of someone with all the confidence in the world. She is introduced with established status as one of few who runs things, with a crew of women that are happy to oblige. Instantly she is drawn to newly transferred Daya, played by Dascha Polanco, who appears to have little to no interest in Daddy’s overt advances, but the rejection only lasts so long, as Daddy, who has a gift for reading people and meeting their needs, eventually gets Daya’s attention and the pair soon become involved.

While Daya, who so far has only shown interest in men, refers to the hookup as “gay for the stay” there’s no denying the chemistry between Martinez and Polanco is one of the best things to come out of Season 6.

For someone who has never acted before, Vicci Martinez has a natural allure that is sure to land her some interesting roles beyond Orange Is the New Black. As far as music goes, she has no plans of leaving that behind just yet.

“I will never stop doing music,” she said in an interview. “I think I wanted to just kind of come out and do acting and see what doors would open from that and it allowed me to actually take time with the music I want to make. There’s no rush.”

In an unexpected and adorable turn of events, OITNB’s newest addition is in a relationship with Emily Tarver, who plays CO McCullough in the series. In addition to acting in the same show, the couple has joined musical forces and can be seen performing together in Martinez’s YouTube channel.

“We are super in love,” Martinez said of Tarver. “And we have a music group together. She’s fulfilling my fantasy of doing duets together.”

Yet another match made in Netflix heaven.

Season 6 of Orange Is the New Black is now streaming on Netflix.