In this week’s episode of LGBTQ, Jeffrey Masters sits down with Our Lady J to talk creating music and the joy of removing gender from the conversation.

Our Lady J is a writer and producer on the TV show, Transparent, as well as a classically-trained musician who’s collaborated with artists like Sia, Lady Gaga, and Cyndi Lauper.

You can listen to the full episode here or read the inspiring interview below. 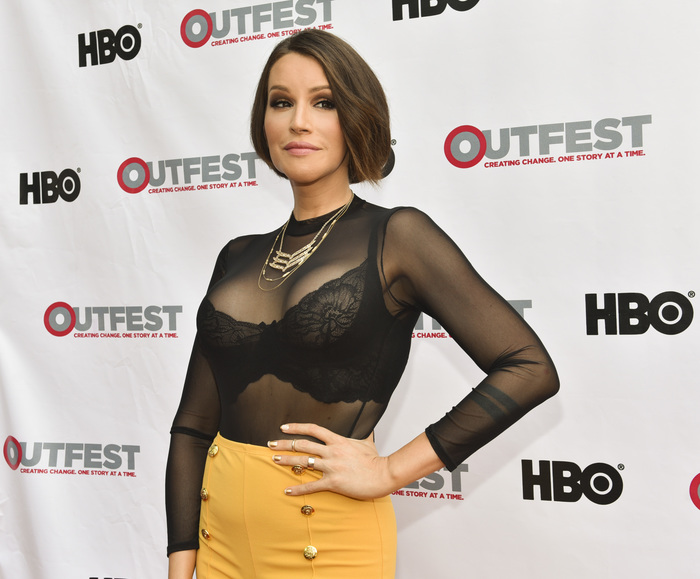 Jeffrey Masters: Looking at your life, you grew up in an Amish community, moved to New York City, you’re now in Los Angeles, in between that you were a classical musician, you toured with Sia, and now you’re writing for television on a hit show. Gender aside, there’ve been many, many transitions in your life.

Our Lady J: When you put it that way, I guess so. Yeah, it’s exciting. I don’t like being bored.

Jeffrey Masters: You were on tour with one of the biggest superstars in the world. Was it hard to leave?

Our Lady J: It was hard because I love Sia and I love music, but I knew that with music, there’s a glass ceiling that’s so thick right now for trans people. One of the first things I heard when I gave my demo to music execs was that nobody wants to hear a tranny sing sad songs. That was from the mouth of a music professional. I was like, “Well, I’m not going to make dance music, I’m fucking depressed.”

My heroes were Tori Amos and Rufus Wainwright and Tom Waits and Nina Simone. They wanted me to do a Lady Gaga act. Yet, on television, shows like Transparent and Orange is the New Black were being made.

Maybe eventually I’ll go back to music, but for now good riddance to the music business.

Jeffrey Masters: Even when you weren’t the main act, just playing piano, was your transness an issue?

Our Lady J: Yeah, for sure. When I was in New York, I was really killing it, if I may say so. I was playing Carnegie Hall, American Ballet Theatre, Alvin Ailey, Mark Morris Dance Group.

Our Lady J: The biggest places. When I transitioned, I stopped getting the calls. It was very strange that my abilities didn’t change, actually I got better. I became a better musician. I felt like I became more expressive. I had more focus because I was starting to live my authentic life and I was less distracted with this inner turmoil. The business started drying up and I lost a lot of work.

It was never really talked about. Here’s the thing about discrimination and systemic oppression: it rarely manifests its head in a way that is so blunt. It’s mostly this sinister, underlying unspoken thing. Because there wasn’t this knowledge of transness. People couldn’t even hear my music when I would enter the room, they would just see this strangeness that they didn’t know about.

Our Lady J: Well, it turned out okay.

Jeffrey Masters: You famously wrote a short story based on your childhood to get the job on Transparent, since you hadn’t written for television before. What was the story based on?

Our Lady J: In my community there were 200 people in my village. There wasn’t even a post office or a gas station or anything around. It was a mix of Amish, Mennonite, and Evangelical Christians, and hillbillies. My family was a mix of all of that: we were ex-Mennonite, we were Evangelical, and we were hillbillies.

The only time I interacted with the Amish was at Walmart because everyone shopped at Walmart. You had to drive 30 miles to get there. I was in the electronics section when I was 15, maybe 14, and there was this Amish boy who was the same age as me. We met eyes and I felt seen by him in a way that I hadn’t felt seen by my family. It was young sexuality. There was this attraction where we met eyes.

As an LGBT youth, back in those days we didn’t date at 15. You waited until you left the house, until it was safe to be queer. At that age, kids want to go out to a movie or something sweet and innocent. I wrote about that moment where I felt seen, my femininity. That’s what it was, it was a moment.

Jeffrey Masters: It’s amazing that it was an unspoken moment that touched you so deeply.

Our Lady J: Yeah, it gave me hope. I always presented femme, whether I was conscious of it or not. Usually when I would see other boys my age it would be a reaction of, “What is that? Is that a boy or is that a girl?” Any moment that I had that wasn’t violent, sadly, meant so much to me. There was so much negativity growing up around puberty with my transness, and with my queerness, that those moments stuck with me for life.

Jeffrey Masters: Speaking of gender, you identify as agender. Is that correct?

Our Lady J: When did I say that?

Jeffrey Masters: You said that six months ago.

Our Lady J: Well, times have changed. It’s been a long six months. No, I identify as gender nonconforming and gender fluid. I reserve the right to explore all areas of the spectrum of gender.

Jeffrey Masters: I think you’re allowed to do that forever.

Our Lady J: Forever. Technically, if I were to say, “What would I put on my tombstone?” I am a trans woman.

Jeffrey Masters: So, you use she and her pronouns?

Our Lady J: Yes, please. The agenderI enjoy removing gender from the conversation at any moment that I can. Because being trans, you do talk about it so much and you do think about it so much. I have spent so much money in therapy that it’s just nice to have a conversation that doesn’t involve gender. Obviously, for LGBTQ awareness I love talking about it.

Jeffrey Masters: Tell me when you get tired of it and we’ll change the subject.

Jeffrey Masters: One of my favorite things that you’ve posted was on Instagram was a picture of yourself pre-transition. You wrote, “Is there a word for looking back at pre-transition pics and crushing on yourself?” I love that.

Our Lady J: I didn’t even realize how, if I may say, how beautiful I was as a human being. There was just so much pain and suffering going on I didn’t have anything to reflect on. It didn’t have a mirror in the media to say, “This is you, and this is okay, and this is beautiful.” There was so much self hatred going on. Now all these years later I look back and I think, “Look at the collagen in that skin, honey.”

Oh, my God. What I would do for that collagen again.

Jeffrey Masters: And yes, you’re allowed to love yourself at any age.

Our Lady J: Well, we’re going to live to be 115 they’re saying, so we might as well get to loving ourselves as soon as we can.

Jeffrey Masters: There is a single trans narrative that people think exists, right? When in reality, there’s not a single way to be trans. Part of that narrative is that you hate the old you, you hate old pictures of yourself.

Our Lady J: That’s because bad movies and bad TV shows have taught us that trans people hate themselves, but it’s very complicated just with any other identity. I didn’t hate every moment of my childhood. I had many beautiful moments. The piano was one of those things that I just loved. There was an excruciating amount of pain for sure. I think when we can move past the pain, and forgive, and do what we can to make sure that that pain doesn’t happen to other people, that’s when we really learn to love our past as well.

Jeffrey Masters: It kills me that you lost jobs in New York, because as a gay man, in a liberal city like New York, on Broadway, there’s not a more accepting place in the world for me.

Our Lady J: I think it was gay men who did a lot of the discriminating. They didn’t understand it. I think a lot of times when people live in a box of like, “I’m trans so, oh, I must understand everything about race,” or, “I’m gay so I must understand everything about transness.” That’s just not true. Even though you have faced discrimination you still have to stay woke to other peoples trials and tribulations, if I may say so.

Our Lady J: Regarding femininity though, I hear this with a lot of gay men as well. It’s something that I think a lot of trans women share with gay men, even though we’re different in our identities, is that any sort of femininity in a masculine presenting body is shamed in our society. That’s getting a lot better, thank God.

Now that I’m doing what I do in Hollywood, I have the television academy card that says Our Lady J. My Writers Guild card says Our Lady J. I have all these IDs that say Our Lady J. That’s the ‘fuck the system’ for me, that I’m not a cis person entering your space. I am trans and I am proud.

Jeffrey Masters: And you’re leading with that.

Our Lady J: Yeah. Leading with a name. I love queering names. You don’t actually need a cisnormative name on your drivers license. Put whatever the fuck you want on your drivers license. I know a lot of trans people are keeping their birth name as well because they’re like, “Fuck you. This is who I was born. I don’t need to change my name just because you got my gender wrong.” I think that’s beautiful.

This interview has been edited and condensed. The full LGBTQ interview is available as a podcast on iTunes.