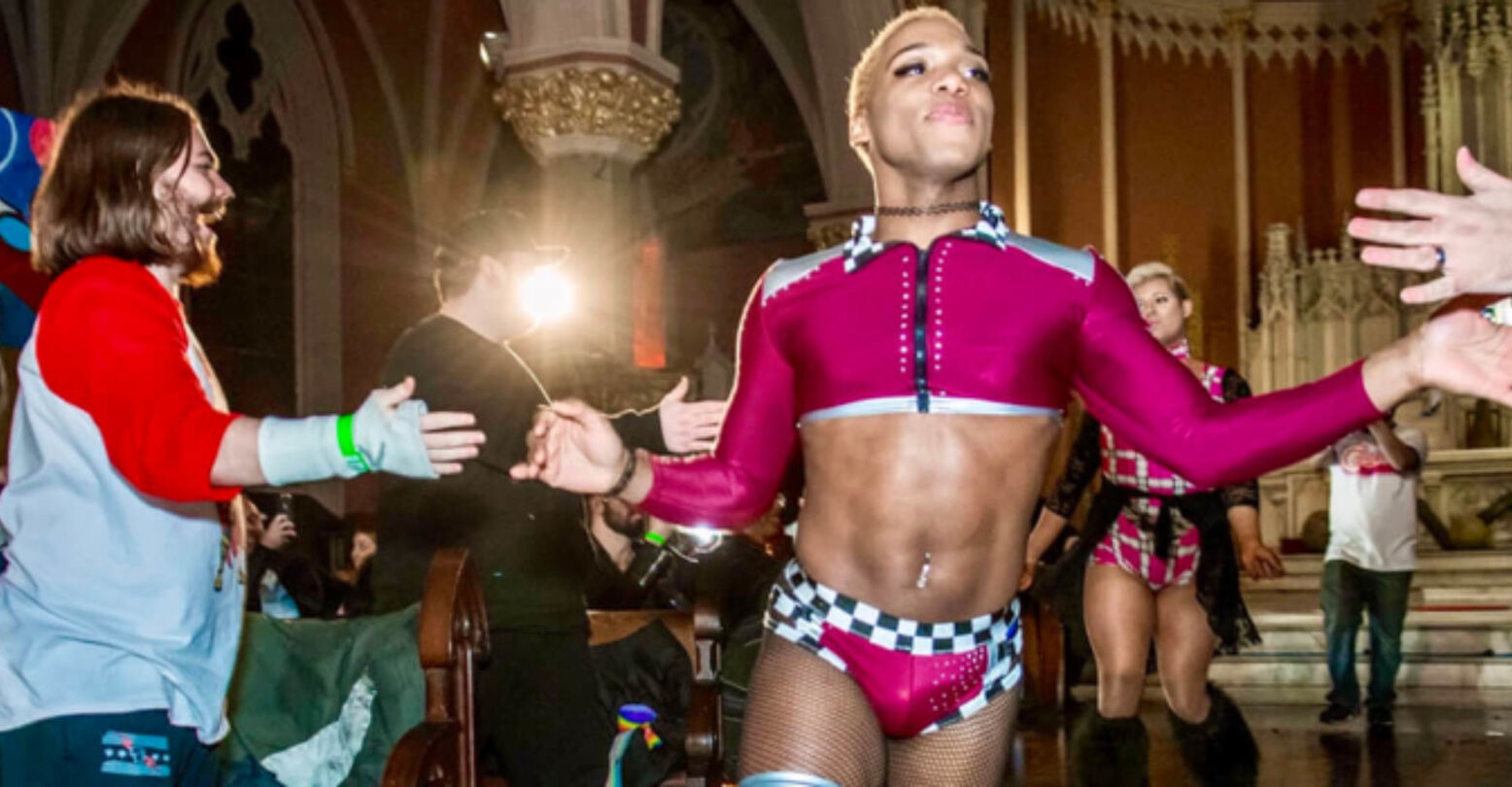 In the public imaginary, pro wrestling is still the domain of the hyper-masculine, in which muscle men battle for glory and punish those who diverge from the norm. Despite huge leaps forward in the sport, which has included amongst other things a newfound respect for women athletes, largely negative stereotypes about the sport as an entertainment form exclusively for rednecks still exist.

But perhaps unseen by those not interested in the relatively niche hobby, a revolution is taking place. Suddenly, in the past five years, the industry has witnessed an explosion of openly LGBTQ performers rising to prominence in both the underground and the mainstream. And although historically, pro wrestling has largely been frighteningly unkind to sexual minorities, a new generation of trailblazers are righting the wrongs of the past and becoming beloved superstars along the way.

This tremendous journey is the subject of Ryan Levey’s upcoming documentary, Out In The Ring. Exploring the secret queer history of pro wrestling and looking towards the rainbow-colored future, the film is currently being crowdfunded to completion.

We chatted with Levey about the goals of his project and the exuberant personalities he’s met along the way. Check out our conversation with him below. 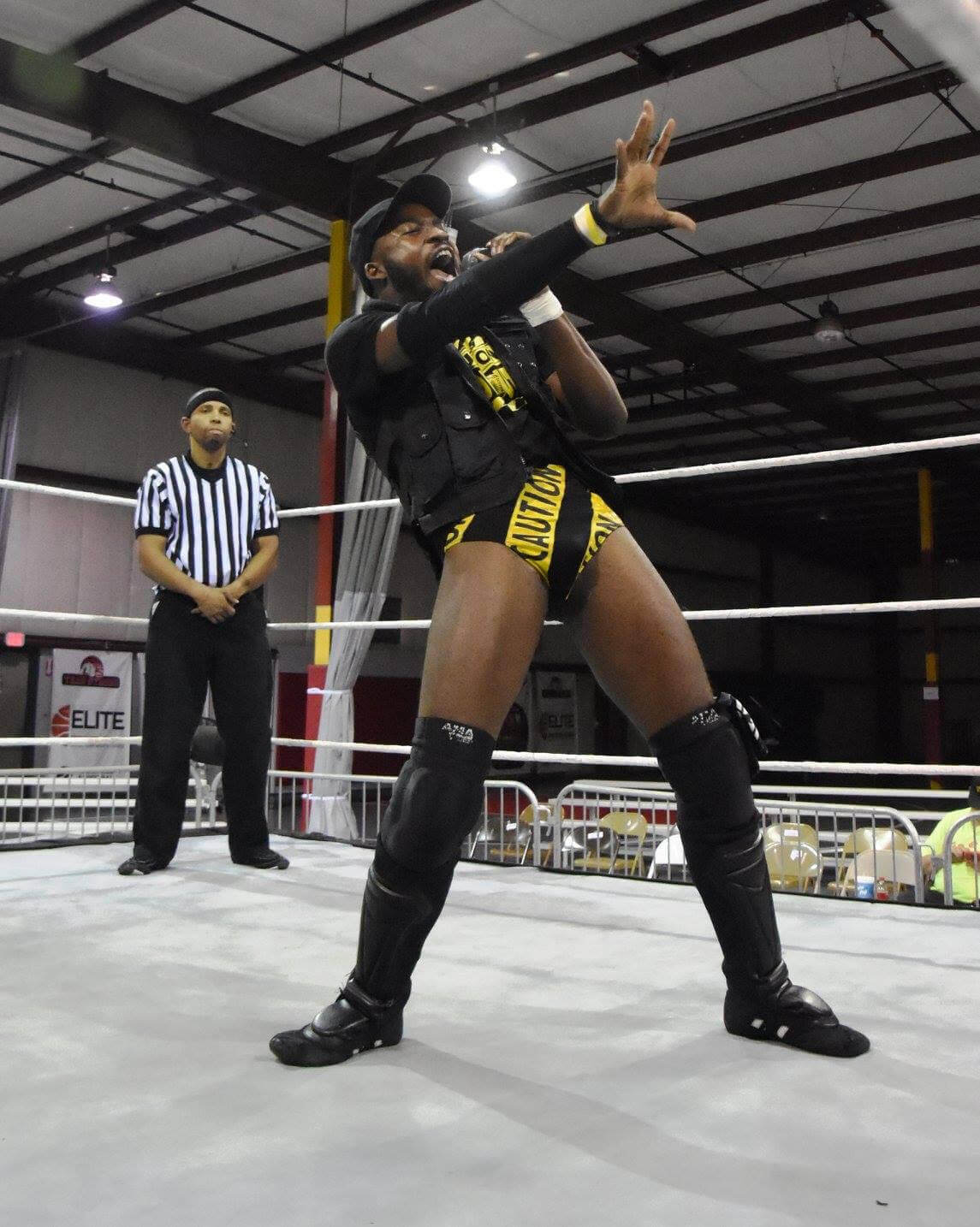 INTO: Thank you for taking the time to chat with us! How did you get interested in this subject matter?

Ryan Levey: I had grown up in Alberta, around Calgary. I had always been a fan of wrestling. It was something I always gravitated towards. I drifted in and out of watching it, though. I now have a 20-year career in film distribution, working a lot with LGBTQ films and documentaries. When it came time to start working on my own projects, I decided to work on something I had a connection with. Being a fan of wrestling, I was starting to think about why—at the time, about four or five years ago—there hadn’t been any out pro wrestlers. I knew vaguely about [openly gay Hall of Famer] Pat Patterson. The project was going to be focused on a kind of hidden history of queer professional wrestlers. That changed in 2014 when Darren Young came out on TMZ. So then we had the first openly gay WWE active roster superstar and eventual champion.

That kind of opened the doors for a lot of other wrestlers to start coming out. Parrow came out last year. Six months before that, Charlie Morgan had come out in an in-ring promo. I was seeing more and more out wrestlers at indie shows. So [the documentary] starts from the 1940s example of exóticos to today where we have numerous promotions for out wrestlers, we have at least four or five dozen openly gay active wrestlers, a bunch of whom are now on TV, including in the WWE, where we have Sonya Deville.

So we can see this huge shift happening.

How long have you been working on the project?

I started researching about four or five years ago. That’s about when the needle started to shift, just a little bit. So, the project shot for over a year. I started in July of 2017 and I finished shooting in September of this year. We’re just at the point where we’re crowdfunding the post-production and we’re hoping to have it done by Summer of 2019. 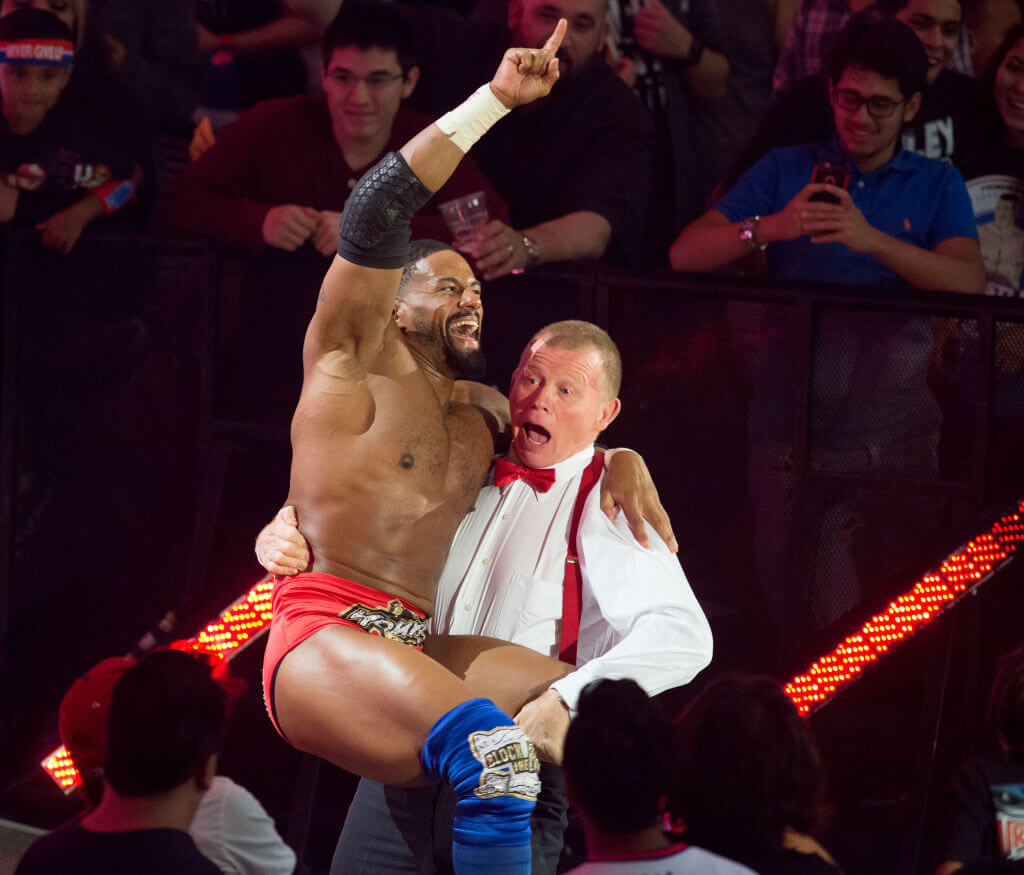 Considering the subject matter, did you encounter a lot of snobbery while looking for funding?

Oh, absolutely! I talked to some funders, some producers. They were just like, “Oh, that’s nice!”

There was always kind of a chuckle as a response. And I tried to explain to them, “Well it’s not that obscure.” In the last three or four years we’ve seen the GLOW documentary on Netflix, and then that got turned into a series. Beyond The Mat was a huge success. People loved that film. So the hope was that we would not only appeal to wrestling fans.

People still, to this day, say, “Well, there can’t be that many gay or openly LGBTQ wrestlers!” But there’s at least 60 or 70 now, and they’re all working. Since I started shooting the film we just see more and more of them coming out. And we’re also seeing more of them get on TV: Sonny Kiss on Lucha Underground, and Mike Parrow just was working in All Japan and MLW. Charlie Morgan is doing NXT UK stuff now. Sonya’s on the way up. Just two weeks ago, a wrestler named AC Mack just did an NXT show. They’re getting the recognition.

The political situation at the WWE is a complex one right now. Although they’re making a lot of progressive steps forward, they still also remain firmly committed to a lot of conservative principles. What’s your evaluation of what’s happening there?

That makes me think of the Finn Balor thing. I question the optics of that. The WWE has a bad history with this. The WWE did a NOH8 photoshoot, but still on my mind is when the WWE pulled the wool over GLAAD’s eyes for the Billy and Chuck angle.

There’s a few theories about it. Like, here’s Finn doing this great thing in New Orleans [coming out to the ring with members of the LGBTQ community]. But two weeks later the company is going to Saudi Arabia. So how much of this is just optics? And how much of this is about genuinely wanting to see real change? Women can’t even work the Saudi Arabia shows.

I think that [former wrestler and current WWE Executive Vice President of Talent] Paul Levesque and [WWE Chief Brand Officer] Stephanie McMahon are genuinely very socially left-wing and are supportive of the community. I know that a lot of this is the two of them spearheading [some of the more progressive movements within the company]. But it’s certainly not [current WWE CEO and Chairman] Vince McMahon. It’s certainly not [former WWE CEO and current Trump administrator] Linda McMahon. At the end of the day, the board of directors is still giving money to Saudi Arabia right after Khashoggi was killed in the embassy.

A big question for a lot of these out wrestlers must be how to present themselves to audiences. Can they be femme or masc — or both? How far can they push the envelope in either direction? And how will the crowd respond?

I think the idea is: if it’s your character and it’s part of who you are as a person, then do that. Sonny, for example: that’s him! Sonny is fabulous and femme. And then you meet Killian McMurphy, his boyfriend. He’s a fighter, he’s a brawler. And Killian’s like that in real life!

Last night, Killian and Sonny teamed up. And they kissed in the ring! They embraced! It was a great match! The crowd loved it! It was huge!

I was talking to a man there, and he said to me, “I didn’t know what to make of Sonny Kiss the first time I saw him.” I obviously knew what he meant. He was uncomfortable with the idea of this kind of femme wrestler. But then Sonny gets in there, and he’s a gymnast and a martial artist. He’s tough and strong and intense. And people love him! Same thing with Effy.

In most cases with these out wrestlers: that’s who they are, and it’s their persona. It’s authentic. When I go to A Matter Of Pride shows, they are truly like that outside of the ring. They are like that in real life.

Certain out wrestlers might not want to be on only LGBTQ wrestling shows. But those shows provide a safe space for the wrestlers — and for certain fans. They allow people to be out and open. It was an energy I hadn’t seen before. I went and filmed the A Matter Of Pride show in Providence. [Former WWE Women’s Champion] Melina came out of retirement and wrestled on the show. The performers said that—for them—being in that dressing room is like Paris Is Burning. Everyone is backstage, dancing, throwing shade. It’s that energy for them. For a segment of these wrestlers, this is their wrestling Stonewall. This is them saying, “Fuck you, we can come out. We can be who we are and work as who we are.”

Each one of these performers has a different perspective on how to be in the ring. 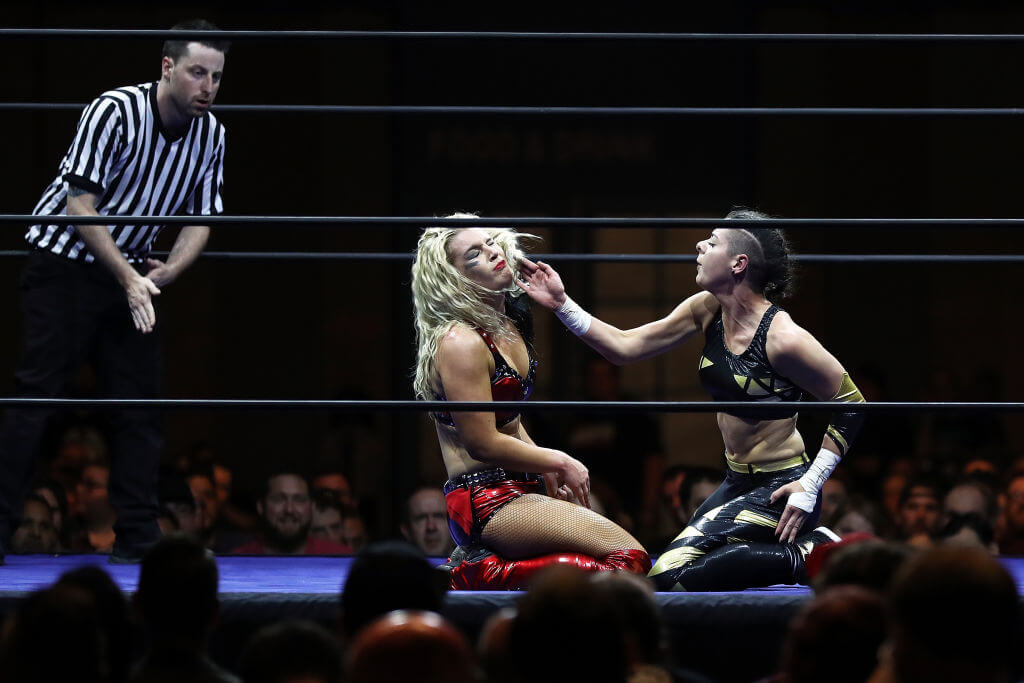 How do you feel about how the history of pro wrestling has often played with gay stereotypes, often negatively?

Look, pro wrestling has always appropriated gay culture. You can’t look at the Road Warriors costume and tell me that isn’t Tom of Finland. Or Adrian Adonis in the ‘70s in leather. That’s total appropriation. And the link between pro-wrestling and drag isn’t really a stretch. The robes. The sequins. The spandex.

But now you can have a gay person as a face! Sonny is a totally positive representation of a femme person. The crowd pops for Sonny. He’s got charisma. I love this idea that he’s breaking this stereotype. He’s a femme, gay man who can get in the ring, twerk, flip, punch, and work as the underdog. Sonny takes out men that are 275 pounds! And that’s exciting to see.

Considering the obvious similarities between drag and wrestling, is it surprising to you that there isn’t more of a gay following for wrestling?

Well, it wasn’t a safe space for gays. Listening to some of this old ‘70s and ‘80s stuff: there’s Jerry Lawler calling Jimmy Valiant a fag. Right there. Or Owen Hart on a television show encouraging the crowd to chant “Faggot!” at an opponent. And it still happens at shows!

I did a podcast interview last week and they posted a photo of Darren Young. And the people on the podcast’s [social media page] were commenting, “Enough with this gay shit.”

And I tried to say something like, “This is the 21st century. Maybe you should try discussing equality.” And they just responded with the same statement. And we just can’t allow these people to have these spaces. There’s a difference between criticism and homophobia. And this is a show that had just had me as a guest, they had Darren as a guest, they had AC Mack as a guest. The optics of allowing us on the show and then allowing those posts on their page with no moderator addressing it: that’s a problem to me. We’ve got to try and change that.

And that’s why I love when wrestlers like Pete Dunne, who will stop a match when he hears an audience member using the word “fag.” He got that person kicked out of the show. I admire that. The times have changed. We don’t use certain things anymore. It’s still there, but using outright homophobia as “heat” – the moment a person feels unsafe in these spaces, it’s different. It’s only been in the last few years that out wrestling fans have been vocal about this.

I always felt comfortable being in these spaces, and I know a lot of people don’t. It’s better! And you never know what things can shift politically. 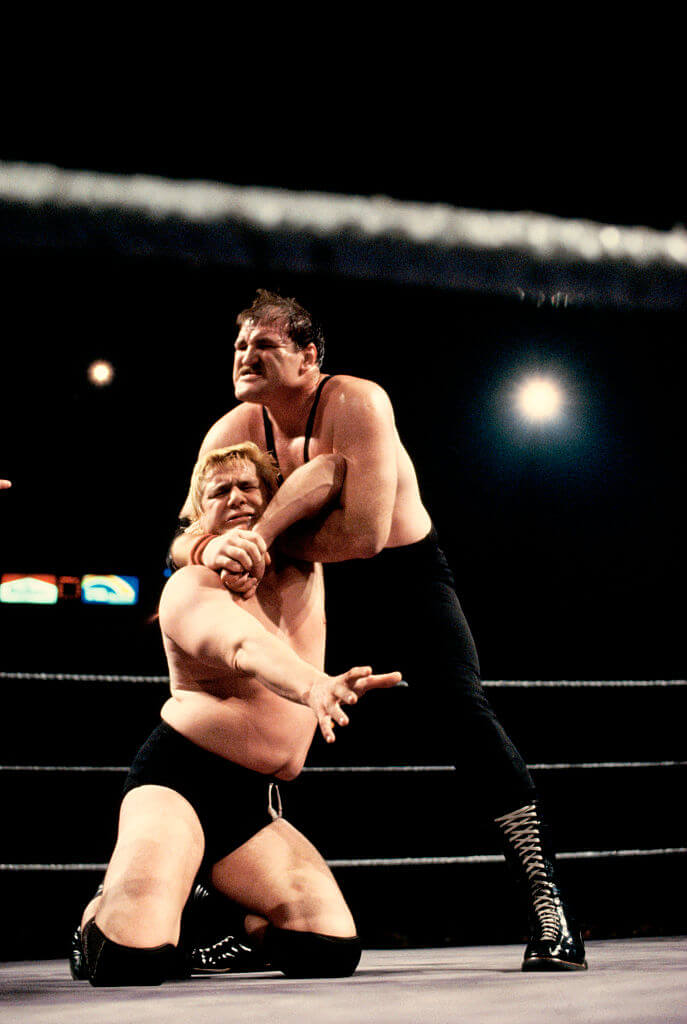 What direction do you see the future of pro wrestling taking? How do you see your film in this context?

The goal of the film is to highlight that there are many personas in pro wrestling, that there’s endless rich history, and that hopefully people will take the time to discover that we’re not all that different. The similarities are greater than the differences in a lot of ways.

You can help fund Out In The Ring on GoGetFunding.com. The campaign ends on January 1.

Interview has been edited for length and clarity.

Images via Getty and Out in the Ring