There it is, back to front, not so much sitting on the mannequin as floating on a vibrational frisson of impeccable tailoring and deconstructing slashes: A Union Jack for the ages, a coat that’s been through the wars.

We have a hard time not reaching out to touch it, slack-jawed. Alexander McQueen’s Union Jack coat was commissioned by David Bowie in 1996. That is, if you can call Bowie ringing up McQueen—freshly sprung from Central Saint Martins design school—while the designer impersonated his own assistant, a commission. However casual the conversation, the coat wound up anchoring Bowie’s 1997 Earthling album and world tour. But McQueen—affecting a posh accent—wanted to get something out of the way first and enquired if his “boss” owed Mr. Bowie money. Hanging up the phone in his Hoxton Square studio, McQueen laughed to a friend, “Fucking David Bowie, innit.” 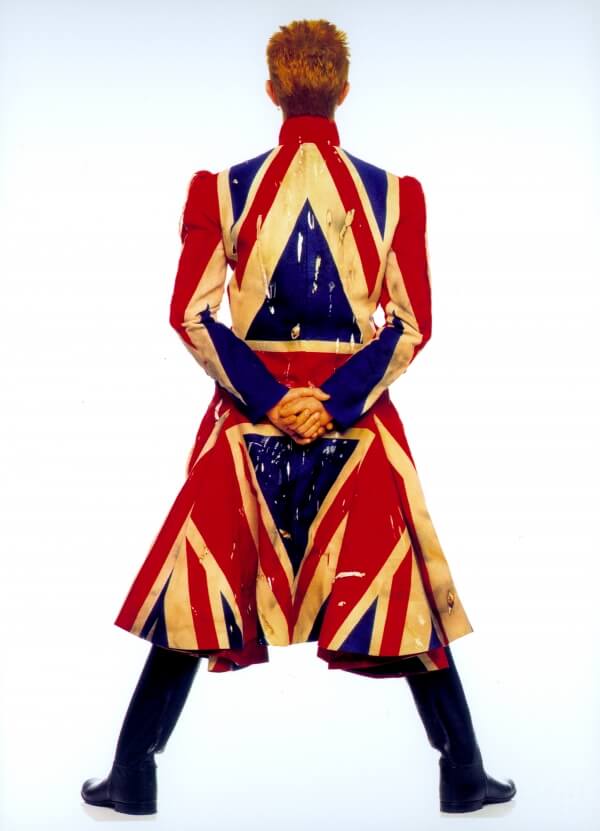 Over the next seven years, McQueen snagged four British Designer of the Year awards and a celebrity clientele that included not only Bowie, but Lady Gaga, Rihanna, and Bjork. On the morning of February 11, 2010, McQueen’s housekeeper discovered the 40-year-old hanging in his wardrobe, leaving only a note that fretted for the well being of his dogs — an English bull terrier named Juice, a Rhodesian ridgeback called Callum, and Minter the mutt — even though they were well provided for in his will.

Six years later, a secret cancer claimed Bowie, but that Union Jack coat lived on, popping up the spring after Bowie’s death at the Met’s Anglomania show and returning the following year for their record-breaking McQueen survey Savage Beauty. That show transferred to London’s V&A in 2015, but the coat arrived two years early for the V&A’s Bowie Is… retrospective which transferred to the Brooklyn Museum this year, where we continue to stare at it, still unable to speak.

Two mornings before our visit, the American designer Kate Spade was also discovered by her housekeeper asphyxiated by a red scarf of her own design. That scarf was already experiencing an uptick in sales. When we finally do speak words, they are of her.

“Amateur hour,” my friend offers. “Did McQueen even design scarves?” I reply, thinking of the aluminum “Jaw Bone” mouthpiece I’m tracking in an online auction. Hooking behind the ears like aviator glasses, this facial adornment gives the wearer a spectral illusion that part of the skull is on the outside. Death was not an around-the-doorknob lark for McQueen, but rather a career-long driver that continues to compel the brand years after his passing. 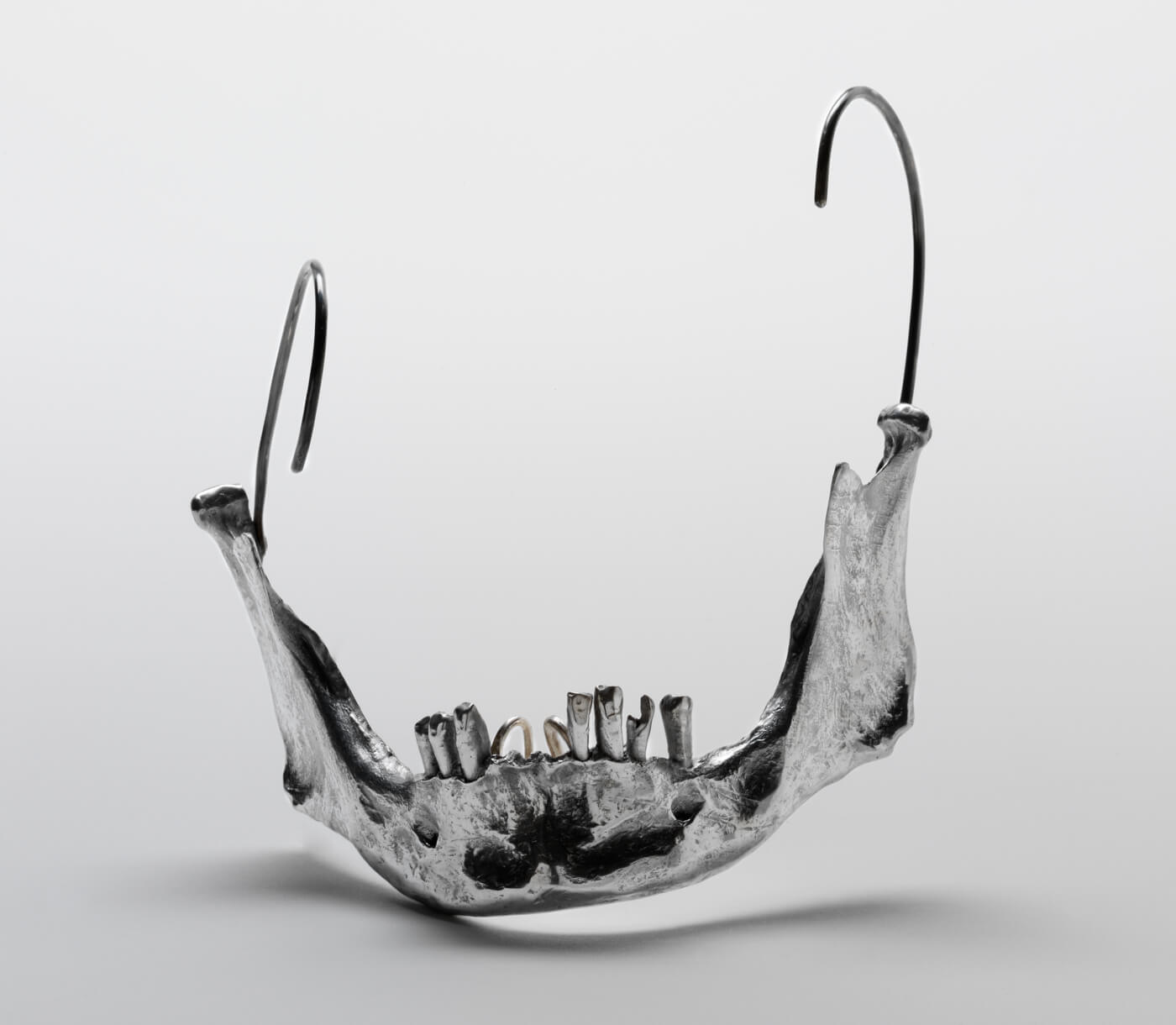 To wit, there’s a new documentary, simply titled McQueen, opening this month, that pairs rare footage with a gorgeous score from McQueen’s frequent musical collaborator Michael Nyman. There is also a feature biopic called Lee slouching toward production that tracks the creation of McQueen’s legendary 2009 Parisian fashion show entitled The Horn of Plenty, which McQueen himself described as “a sackable offence.” And, of course, there’s that Union Jack coat, which continues to hop the pond with a frequency that’s quite ready for British Airways’ rollout of its already patented Concorde 2, which will make the transatlantic flight in an hour. Until then, we hopped the pond ourselves to compile an off-beat walking tour of some of McQueen’s London haunts not seen in the film.

There’s an unassuming, double-step up and into St. Paul’s Church, the 1843 Gothic Victorian brick pile located in the posh, West London enclave Knightsbridge. Known primarily for high-end retail, like the Harvey Nichols that’s a five minute walk west and continues to not only sell McQueen’s label, but also hosted the first taste of The Met’s Savage Beauty McQueen retrospective in its famous Sloane Street windows months before the show proper arrived at the V&A Museum, another 15 minutes west by foot from Harvey Nicks.

Even when in use, St. Paul’s won’t be crowded, but you can imagine the locals popping in for service to the black-clad Naomi, Kate and Stella—just a few of the one-named fashion phenoms who graced McQueen’s blustery, February 25, 2010, funeral—or the heiress Daphne Guinness, arriving like a paratrooping Angel of Death in a billowing cape from McQueen’s Fall 2002 Supercalifragilistic collection. McQueen’s relatives chose the family tartan showcased in his Fall 1995 Highland Rape collection and were said to be vastly more comfortable at this intimate service than the more showy memorial which took place after the summer, featuring the likes of Sarah Jessica Parker and Bjork turning in an unbearable birdlike rendition of the Billie Holiday staple “Gloomy Sunday.” 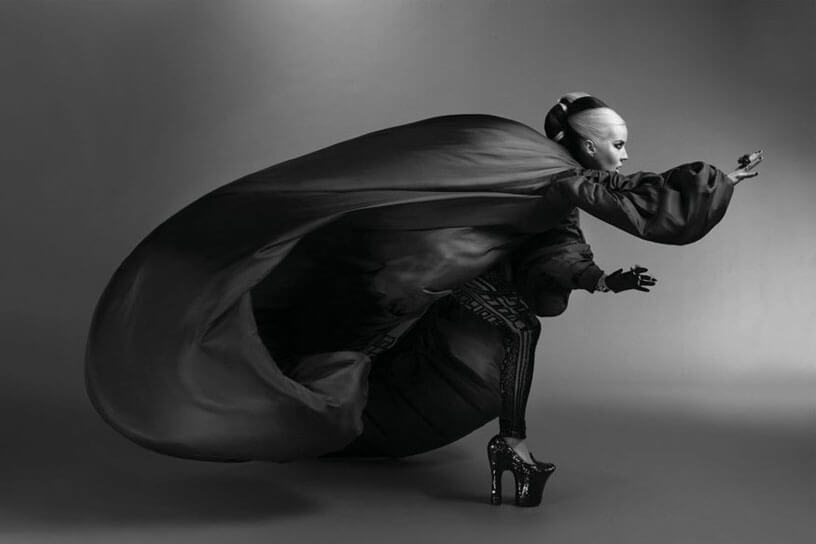 Don’t let the dolled-up lavender walls and bourgie chandeliers of this public house fool you, there are still plenty of Yelp entries that attest to a strong piss smell emanating from the gay fetish club in the basement and wafting through the new ground floor restaurant with a budget hotel above. Back in the day, Central Station’s basement was one of any number of McQueen haunts that put him somewhere between functioning genius and chaffed sex addict. Just a stone’s throw across the Regent’s Canal from his fashion formative years at Central St. Martins, Central Station was a bit of a home base for the hard-partying McQueen. And it’s hard to think of that legacy without considering its ephemeral nature. 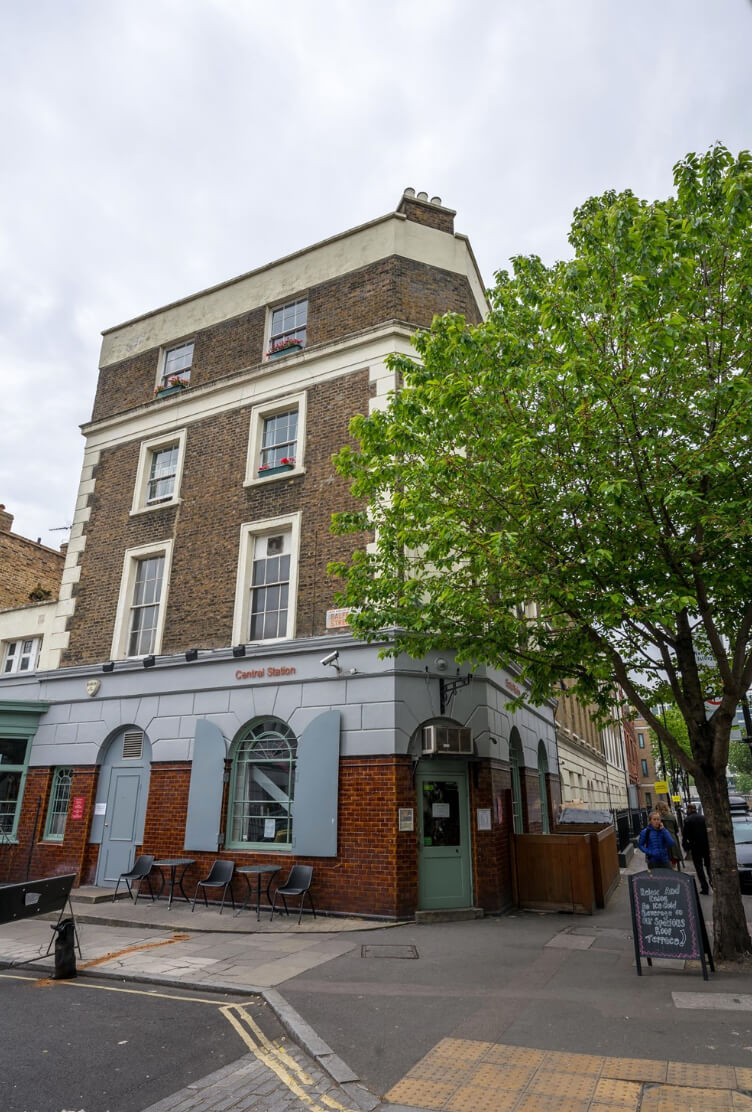 For instance, it’s said that the only person to actually purchase a pair of his trademark bumster trousers—a pair of pants that prefigured an entire generation of gay men dressing like public school children — from the runway was Kylie Minogue. The rest were passed out like party favors to friends, although one cashed in a few years ago selling a low-slung pair at auction for £3,500. When the organizers of Savage Beauty rang up Alice Smith looking for a pheasant-feathered bustier she’d worn in a photo shoot, the model didn’t have the heart to tell them it basically fell apart in the back of a cab where McQueen suggested they abandon it. 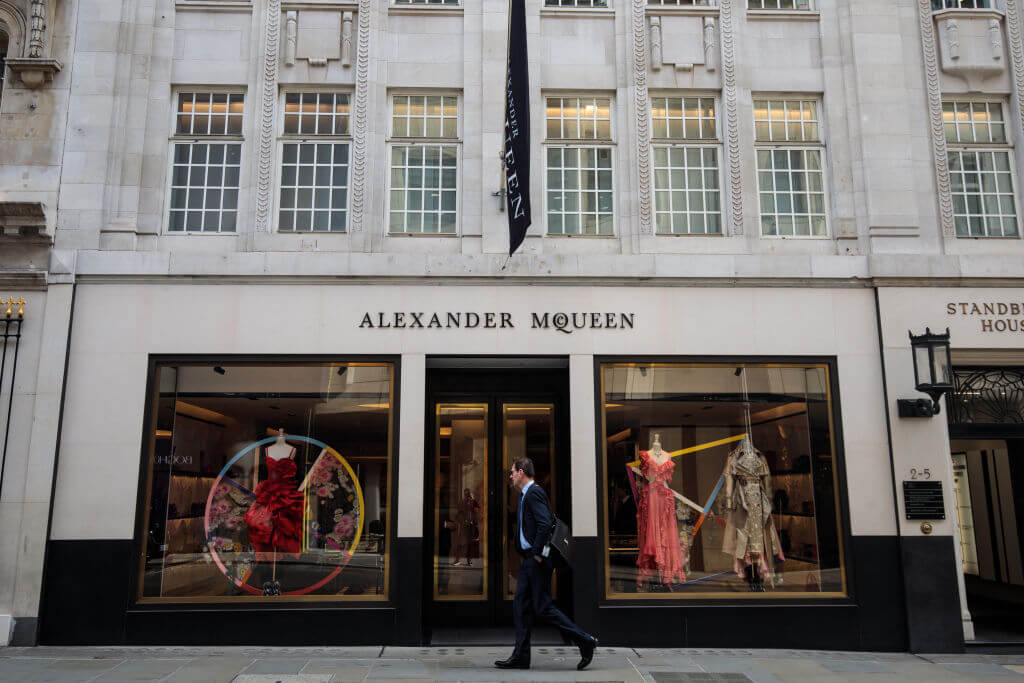 But it’s the grotty basement of Central Station—hosting a night called Manstink on the eve of McQueen’s first show Taxi Driver—that we have to thank for no pieces remaining from that collection. Too poor to check the clothes, packed into black garbage bags, McQueen hid them under a dumpster outside the club. When it finally occurred to him the next morning, he rushed back, but the entire collection had vanished.

In September of 1996, London’s fashion press filed into this 1904 glass-topped Edwardian beauty that for a time served as an exhibition hall for the Royal Horticultural Society before attaching itself to London’s burgeoning 1990s fashion scene. The hall hosts all manner of events, from weddings to Robbie Williams shows, so it should be easy to get a peek inside. And when you do, try to imagine yourself as McQueen’s first model making her way down a treacherous flight of concrete stairs and stepping onto what heretofore seemed like a highly polished black mirror, but upon insertion of that first stiletto, revealed itself to be a runway comprised of about two inches of water. The audience gasped collectively. Big girls like Kate Moss, Stella Tennant, and Jodie Kidd continued to muddy the waters, but this collection, entitled La Poupée — French for doll—had special meaning for McQueen. He’d just lost his friend David Mason after the young man filled up his backpack with bricks and jumped into the Thames.

McQueen’s sentiments were conveyed by sending his last model, traditionally a bride, down the runway enclosed in a transparent dome filled with fluttering moths. This might have been a good collection for the makers of the documentary McQueen to focus on as it set the stage for his next decade. Brass from French luxury brand LVMH were in the house and would soon lure McQueen into the disastrous career move: taking over legendary French house Givenchy that year for a tumultuous five-year stretch. A black model, Debra Shaw, limped down the runway in shackles, resulting in charges of racism that would tank the career of his friend and fellow LVMH chess piece, John Galliano, the year after McQueen exited Givenchy. But the documentary treats McQueen as if he exists in a vacuum and Galliano is given zero screen time even though the two British designers tracked remarkably similar career paths. While in the neighborhood, you might take a ten-minute walk west to 33 Alderney Street and visit McQueen’s first London flat loaned out to him by his benefactress and muse, Isabella Blow. He shared the Victorian house with Reva Mivasagar until McQueen tried to stab the rival designer with a pair of dressmaker’s scissors.

McQueen’s actual grave is on the Isle of Skye in his ancestral Scotland, emblazoned with the same Shakespearean quote from A Midsummer Night’s Dream that adorned his forearm: “Love looks not with the eyes, but with the mind.” If your tour’s not going to include easyJet, the quarter mile of the Hammersmith Flyover is the next best mortality marker you’re going to get. This elevated roadway is where McQueen’s best friend Isabella Blow made one of six suicide attempts in the two-year run-up to her May 6, 2007 success, when, at her country estate, she paid odd homage to her father-in-law, Jonathan Blow, by ingesting the same weedkiller, Paraquat, that he used to end his life 30 years earlier. The party line, and one that the McQueen documentary retells faithfully, is that Blow was number one of a two-punch that completely destabilized McQueen when his mother passed away a week before his own suicide.

While the latter may certainly be true, McQueen’s relationship with Blow was a long and complicated one. Fashion journalist Suzy Menkes says it ended with Blow feeling “pushed aside.” Menkes continues, “In watching that relationship on screen, I started to feel the discomfort of having lived in a parallel universe to the film. When Detmar Blow, Issie’s husband, talks about his wife’s relationship with McQueen, I can think only of Issie’s anguished emails to me in the last few weeks before her suicide, and the betrayal she felt by the designer she had nurtured.” And while it’s impossible to watch McQueen’s Spring 2008 posthumous tribute to Blow, La Dame Bleue, and not feel the love they had for one another, it could be that final parting took place without reconciliation, making her passing all the more devastating for the impermanent survivor. Menkes suggests it might be “time to bring to a close the re-telling of this sad story,” but it seems impossible to cast aside the person and just appreciate the empty clothes.

One of McQueen’s most enduring legends sprung up when he was a teenager cutting his teeth on Saville Row bespoke suits. Notoriety was sewn into the lining of one of Prince Charles’ jackets, along with the message “I am a cunt.” How can you separate the man from his garments? McQueen is in too deep, down to the very bones of old Britannia.