Queer Pittsburgh, Penn. residents are shocked after a local gay bar scheduled and then canceled a drag night seemingly inviting people to celebrate the birthday of Adolf Hitler.

Though the event has now been deleted, screenshots circulating the internet show an event hosted by Brewer’s Bar in Pittsburgh titled “Fuhrer Festival” as part of an ongoing show series, “Nightshift.”

Brewer’s Bar in Pittsburgh was going to host a hitler-themed drag show to honor Hitler’s birthday.

They’ve since deleted the event and decided to “rebrand it”.

According to the screenshot of the event, which was also supplied to INTO via email, the description of the event reads:

“A party fit for a Fuhrer’s birthday! Join October and this week’s cast of Nightshift as we celebrate one special regime leader’s birthday (technically April 20th). Bring your small mustaches and significant other you want to do cyanide with as we throw a party for a Fuhrer!!”

One queer Pittsburgh resident, Ehrrin Keenan, messaged the bar to share her concerns about the event. Keenan shared the messages with INTO. In the Facebook messages, Keenan expressed her extreme disgust with the event, pointing out that LGBTQ people, as well as Jewish people, were killed in the Holocaust.

In response, the person messaging from the bar’s Facebook account said the event was “not intended to offend anyone directly” and that topics for Nightshift shows are usually “controversial in tone.”

After a long conversation with Keenan, Brewer’s Bar said that it would cancel the event but would be “rebranding” it later. 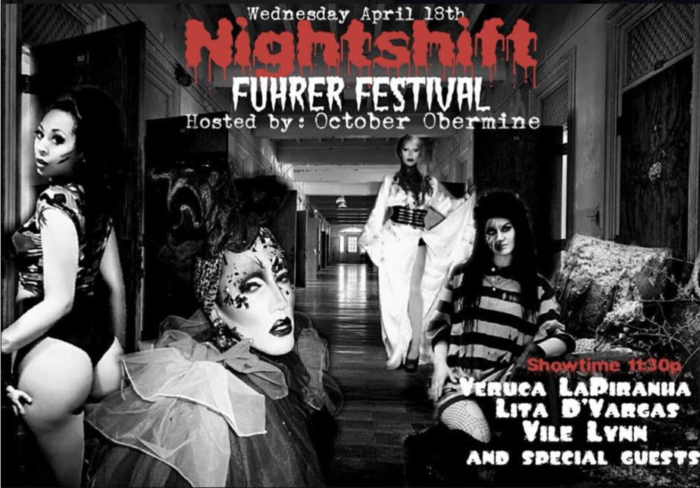 In a screenshot of Obermine’s private Facebook page that was shared with INTO, Obermine apologized for the event and said they are “no way in support of the Nazi agenda.”

“The description written was written in a way that made it seem as if it were indeed a party,” Obermine wrote on their Facebook. “It was not. It was written so ridiculously we didn’t think that anyone would take it so seriously, we thought they would see through it to what it was supposed to be. We were trying to shed light on what is happening in our country with our leaders through our performances. It was in bad taste.”

INTO has reached out to Veruca La’Piranha, Lita D’Vargas, and Vile Lynn for comments. Vile Lynn declined to comment at this time.

In a statement released on her Facebook page on Wednesday, performer Lita D’Vargas addressed the cancelled event, the imagery and description for which D’Vargas said she and the cast did not approve or consent to.

“I need to apologize for the pain the promo caused and the responses to it, that were improperly handled,” she wrote. “While the advertising should have been taken down faster, in reality, it never should have gone up in the first place. I take responsibility for not being more present and for the trust I gave someone I have known since before I started performing.”

In the video, D’Vargas added that the show was originally meant to be “Dante’s Inferno”-themed and was supposed to be an anti-establishment, anti-Fascist show. Her act was supposed to address recent laws, like FOSTA/SESTA, that would silence and harm sex workers.

Local residents who spoke to INTO disapproved of the event and emphasized that the poster didn’t adequately convey satire. Shira Feigelstein, 36, a Pittsburgh-based queer woman worried that, given the amount of white nationalist activity in the West Pennsylvania area, the invite may have attracted dangerous clientele to the queer space, especially if they didn’t know Brewer’s was a gay bar.

“I get the group thrives on satire and their intention was to have an anti-Nazi show but that was not expressed in the advertisement at all,” Feigelstein told INTO. “There’s a difference between a crass joke and inviting, in this day and age, in this climate, inviting people to come and celebrate Hitler in a region of the world that has one of the highest concentrations of white supremacist hate groups.”

According to the Southern Poverty Law Center, Pennsylvania ranks fifth in the nation for white supremacist activity.

“Putting that flyer out there, not realizing Brewer’s is a gay bar, they could show up in their Nazi finery and put my lovely queers in danger,” Feigelstein says.

INTO called Brewer’s Bar for comment. The same person who answered the phone was the person who had spoken to Ehrrin Keenan in the messages obtained by INTO. Brewer’s said they’d attempt to give INTO comment by Thursday morning, but did not return INTO’s request as of publishing. During a subsequent attempt to contact Brewer’s, INTO reached a full voicemail inbox.