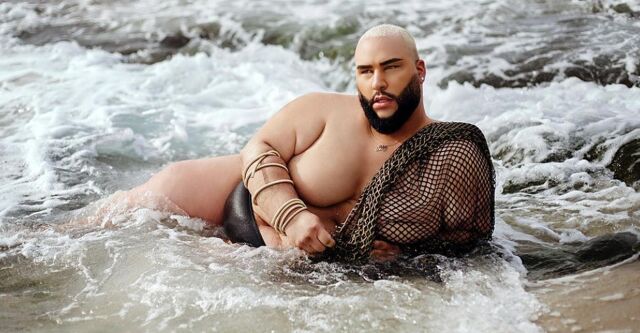 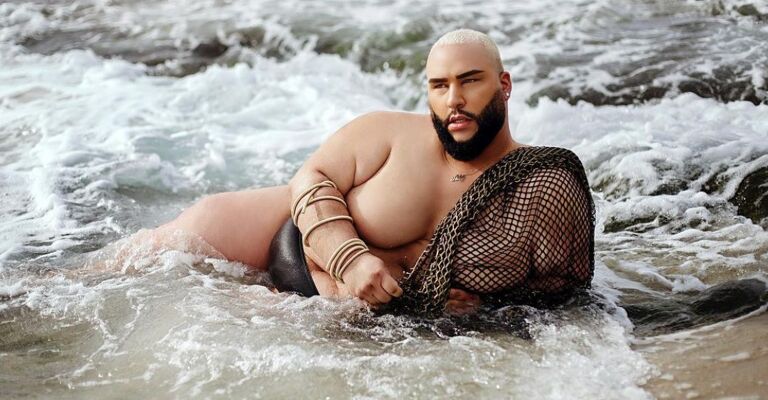 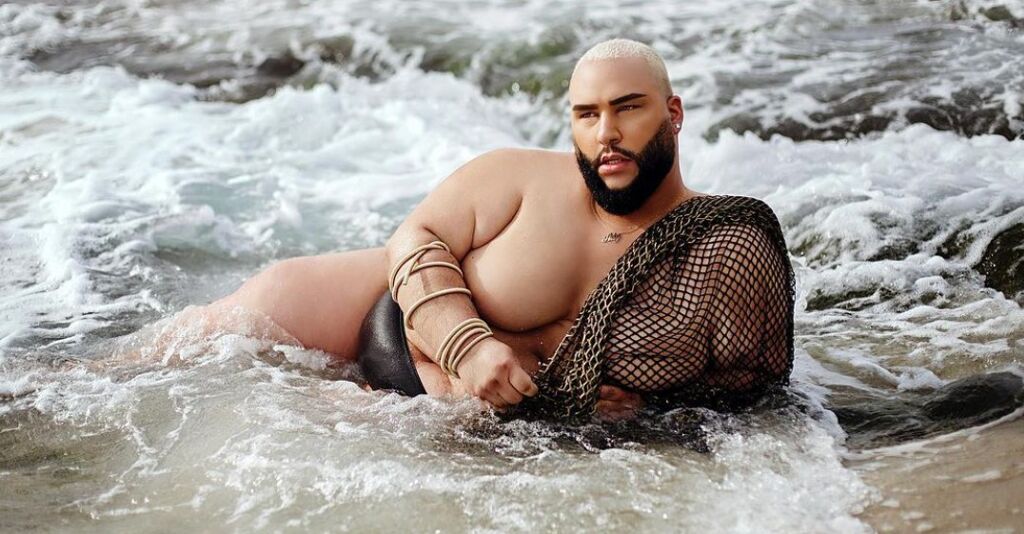 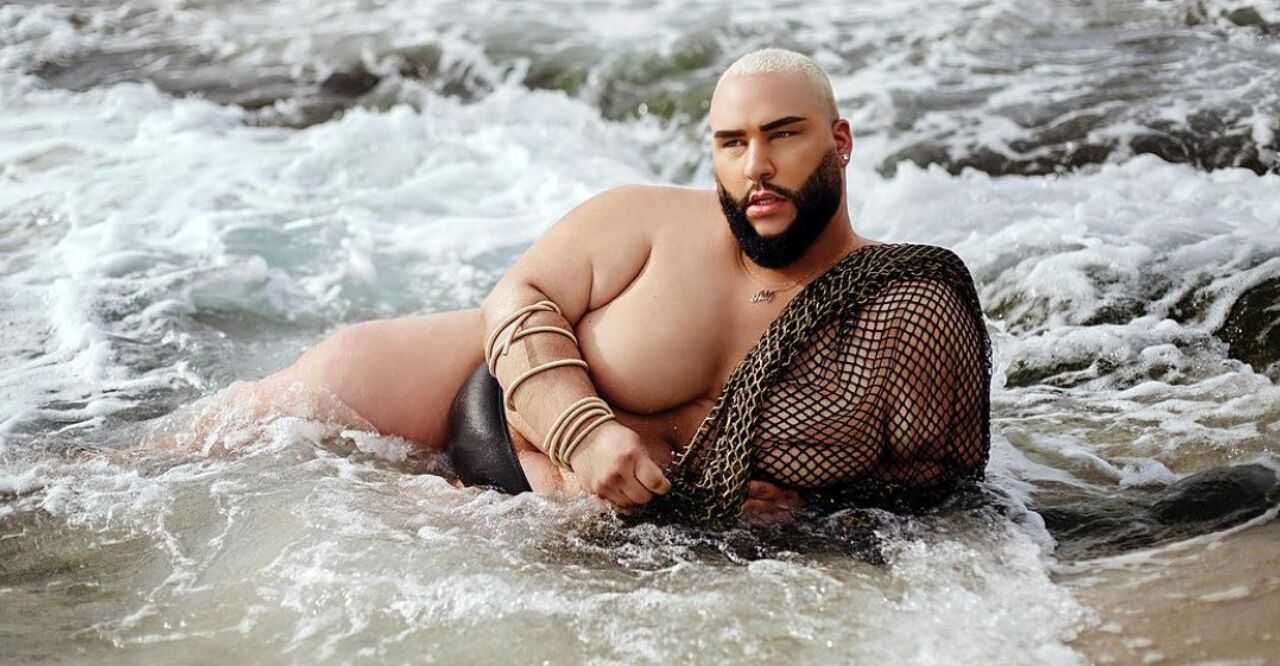 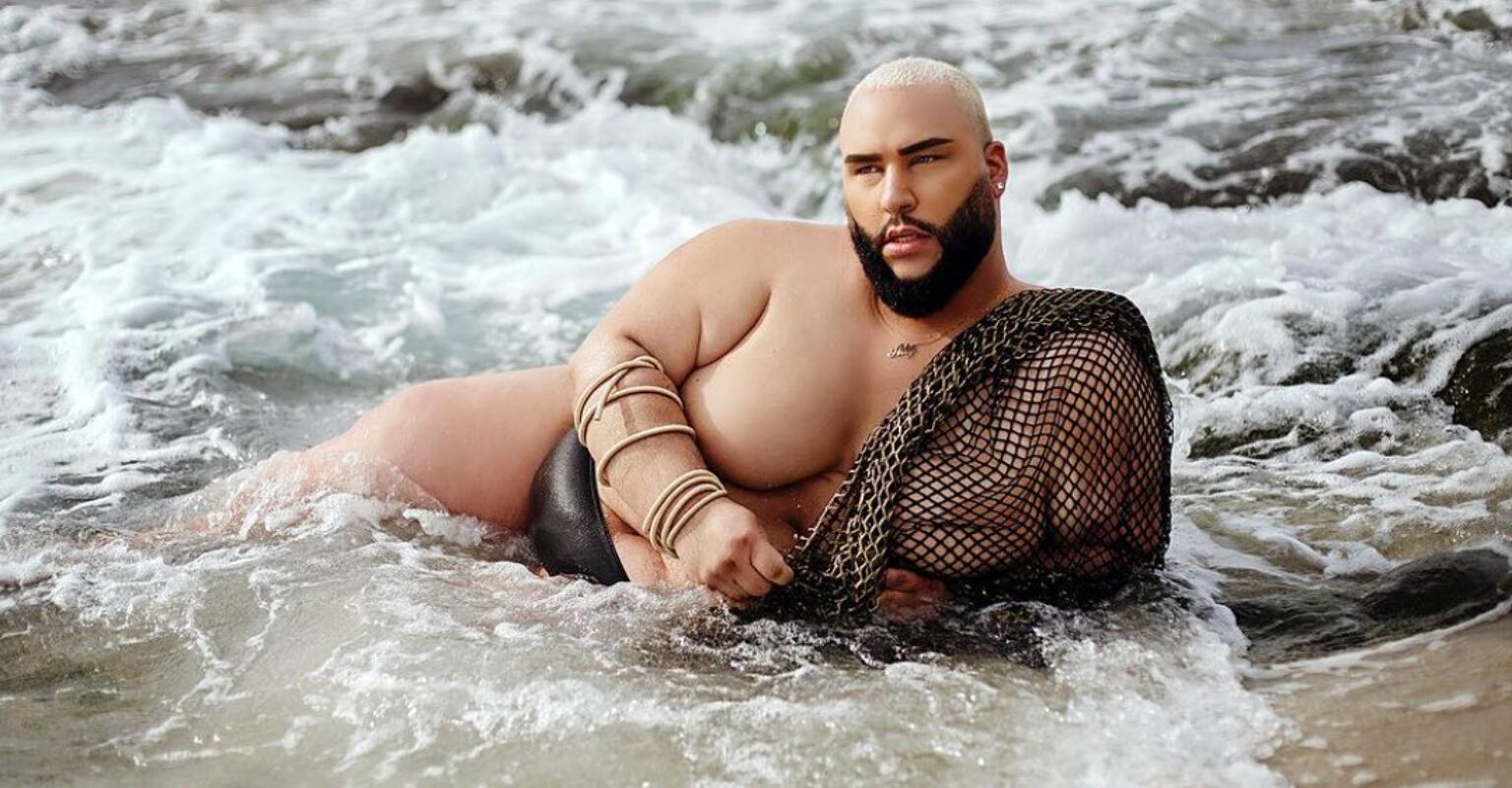 Most of us feel insecure about our bodies or struggle to always love our appearance. This can be particularly true for queer people. One study from the Center for OCD and Related Disorders in Massachusetts found that, “among gay men there was a 32% prevalence rate of body dissatisfaction, compared to 24%” of heterosexual men. Gay men are also three times as likely to be diagnosed with an eating disorder.

Although body dysmorphia should not be confused with gender dysphoria, trans and non-binary people can often experience both conditions.

One person who has sometimes struggled to embrace his body, but has now turned it to his advantage, is 33-year-old Ady Del Valle.

Based in Boston, where he was born and raised, Del Valle works at a Family Resource Center that helps victims of human trafficking, sexual assault, and domestic violence. He’s also established a career as a plus-size model.

Del Valle uses he/him and she/her pronouns, and tells INTO he “leans towards more the non-binary spectrum.”

He began modeling in 2016. Recent campaigns include working with Sephora, The Phluid Project, FatTrunk Jeans, the NYC 2020 Pride organization, and the Patrick Church NYFW 2020 campaign.

He says he first realized that modeling might be an opportunity for him after he did his first runway show, five years ago. It proved a lightbulb moment for him.

“The feedback and reaction from that really was the trigger for me: the realization that people wanted and loved seeing another body type modeling.”

It’s becoming more common for big brands to use plus-size models, and the body positivity movement has become a force both on social media and in real life.

Del Valle welcomes the progress but feels more work remains to be done. He’s noted some brands and designers, when including plus-size beauty, opt for “the popular and acceptable bodies”.

He thinks this represents just the tip of the iceberg when it comes to body positivity. Del Valle says more can be done to celebrate the differently-abled, older and queer, and those who don’t conform to the gender binary.

A year ago, he launched The Latinx Creative platform to highlight Latinx and BIPOC creatives from all industries and walks of life. It began as a simple photoshoot of plus-size models but was so well received that it has continued and expanded. There are more photo projects in the pipeline.

Does it ever feel, to him, like brands use plus-size models as a tokenistic gesture?

“Yes, there are brands that tend to treat larger models as a checkmark on their list for campaigns. I’ve been there and done that, and yes, I will still take the job and be the only fat model on set. But I will take advantage of these situations to have these conversations behind the scenes to make sure that they actually care and genuinely want to be fully inclusive.

“The dialogue starts from the inside. I can’t be complacent for being the only one hired when there could be an even bigger impact if you broaden the representation.”

Away from the fashion world and commercial advertising, larger size figures are still often relegated to second-class status in movies and TV.

“That is a very hard area to tackle, for sure,” says Del Valle. “TV and media tend to place us in stereotypical parts. You’re either the fat funny guy, or the loner reject. They never seem to want to cast bigger men who are actually sexy as the main character: to occupy a place as attractive, desired, and wanted. The industry needs to really open up its perspective and realize bigger men and women are gorgeous, desired, and sexy, just like our smaller counterparts.”

Del Valle is currently single. He says dating apps and social media (he has 20k followers on Instagram) have made it easier for him to meet people, compared to when bars and clubs were the main option. That said, “there’s always a downside” and says he’s met more than his fair share of those who wish to fetishize him.

“It’s OK for them to love what they love, but some of us want more than just being solely desired for our bellies, large chest or whatever, because the focus becomes only on that part of your body and not on you at an intimate, personal level.

“I have yet to meet a man that seriously wants to take me on a date, talk and genuinely, consistently get to know me for me. I’ve been on lots of dates but it doesn’t go past that, and yes, hook-ups are fun. Hell, who doesn’t love a good hook-up? But they’re a bonus. It would still be nice to meet a well-rounded man that loves all of me, inside and out. I know they are out there.”

Often when there is talk of body positivity, some will bring up issues around health. Does Del Valle ever think he should change his size for health reasons?

He says weight is a subject, “super personal to individuals. Believe me or not, I’m a very healthy fat person. There tends to be a stigma that fat bodies aren’t healthy, can’t be physical, and aren’t taken care of, and that’s not true. And even those bodies that don’t do any of that are valid too.”

Many people, particularly LGBTQ people, struggle to love their bodies. What advice might he offer those in that position?

“It’s OK to not love everything about you. We are human and we all have our [bad] days.

“I have my days where I don’t like my body or parts of my body. It’s OK to feel those emotions because they are valid. I’ve learned to go through those phases and shake myself off: Not to dwell in sulking or hating my body. I look in the mirror and tell myself I’m hot, beautiful, sexy, attractive, and worthy.

“Tell your body good things – and even if it’s just a small part of you, that’s a step towards learning the different parts of you, the parts you want to embrace. Also, surround yourself with people that love you for you as you are and uplift you as you are. That’s a huge help for many especially those of us that are a part of the LGBTQ community: good friends and company go a long way.”