Just as Queering the Map had struck a chord with online queer communities, it had hit a nerve with conservatives. In early February, Queering the Map, a project from Montreal-based student and designerLucas LaRochelle, began to go viral and queer people worldwide participated. They dropped a pin anywhere in the world they had done something queer: came out, affirmed their gender pronouns or had sex, for example.

But not long after the project had its viral moment, MAGA-centric pro-Trump messages overran the site and LaRochelle shut it down.Throughout two interviews conducted in February and April, LaRochelle spoke to INTO about bouncing back from a targeted attack, what it means to “queer” a space and what it means to challenge the very idea of queer spaces.

You shut down recently because you were targeted by Trump supporters. What were some of the things they were saying and what did you think when this queer space was desecrated, so to say?

I mean, what was being posted, I presume by a Spambot, was just pop-ups that said, “Make America Great Again, Donald Trump best president!” These points were rapidly multiplying, so when you went on the site they would pop up. The first response was to take the website down to figure out a way to make it more secure against these kinds of attacks, but this was sort of beyond my ability, so I posted on the site asking if there was anyone that was able to help with their coding ability and there was a significant response and I received multiple emails either lending support for the project or emails willing to help out.

So, a group of people set up a github, a code repository where multiple people can work on code together, so we’ve been working together to get the site up and running.

How do you feel getting it back up?

I’m really excited for people to see all of the beautiful things have been posted and to have that place where people can kind of record their memories and their experiences of queer history as it happens.

Yeah, that was an inevitable response I was hoping would not happen. But it makes the project all the more valuable in terms of making those spaces for sharing on the internet, for connectivity, to feel connected to other queer people.

When did the project launch?

It started about a year ago as a project that I started in a class and at that point it was just a map I could add my own memories to. But my interest from the beginning was figuring out a way to make interactive and try to explode it into something that was more plural. So then I continued it from a personal project and then recently–like six months ago–I received funding from a residency to continue it further and I made a book out of some of the additions.

Honestly, like three days ago, a friend of mine who is a DJ in Montreal and has a significant following shared it on Facebook and it went from 200 shares on Facebook to like 4,500 something in two days. I guess that’s the magic of the internet–it’s just endlessly extending.

What made you want to create this project?

I mean, I was biking home from school one day and I biked by this tree that I bike by every time I bike from school, and it was a tree where I met my first longterm partner. And then at that same tree, had a fight where I responded really negatively to him saying that he’s attracted to masc guys, and I’m a very femme person, and so my insecurity was poked and it exploded all over that tree. And so, I was interested in the feeling that every time I pass that tree. There’s a particular feeling of queerness that only exists for me and perhaps that partner. I wanted to figure out a way to make that legible. Because I started thinking of all the other locations in which some facet of queer experience has occurred. I was interested in what would happen if I could walk down the street and see a bench that I know some other queer person had made out on or fucked on or expressed preferred pronouns, but that I would obviously have no way of knowing otherwise. 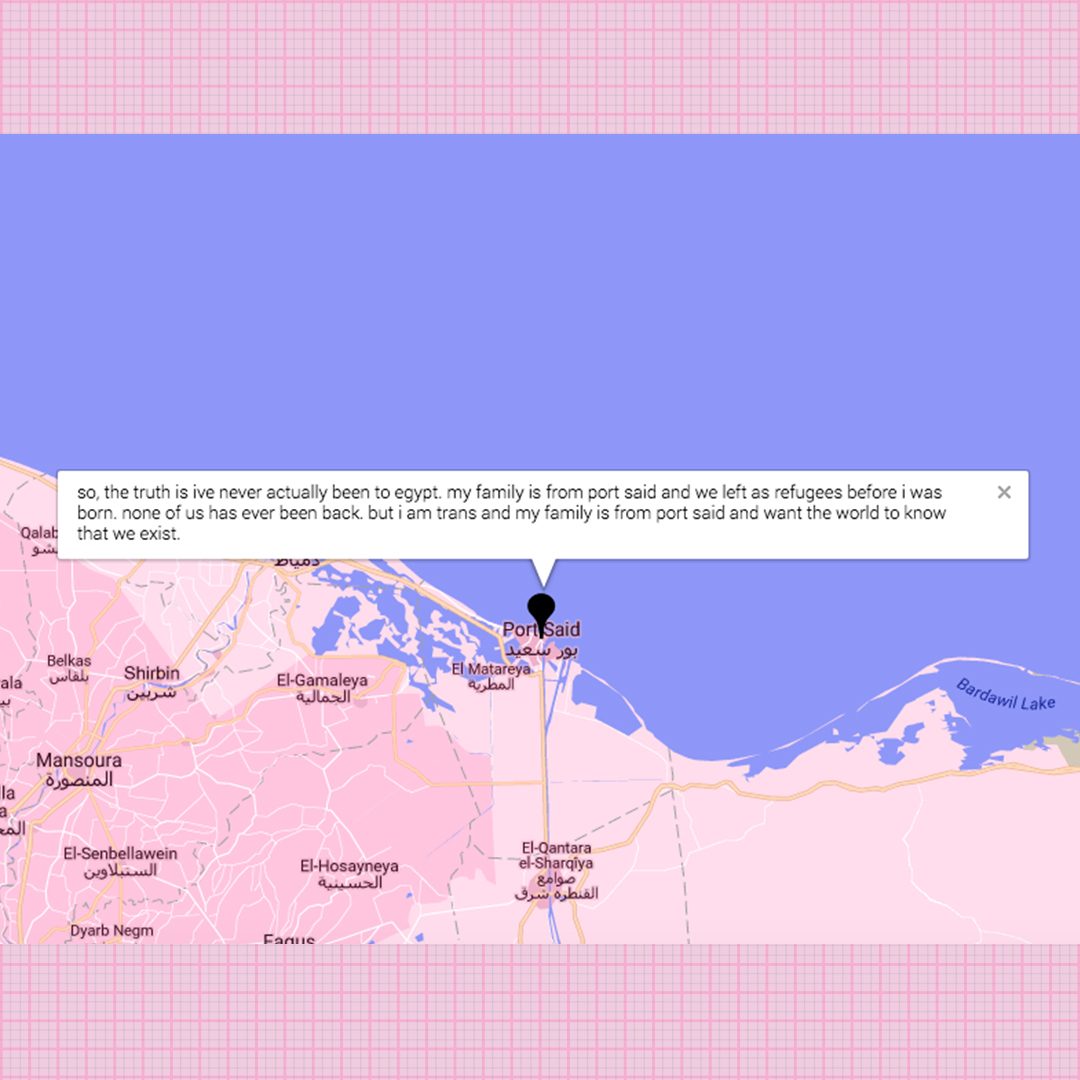 On a top-level look, what do you think the map has to say about the nature of queer spaces?

I think that the biggest thing that it says for me, and through my research in terms of thinking about what queer space means is that queer space can’t necessarily be defined asof course, we have bars and bathhouses and various community centers, but rather, thinking about queerness of something that’s done as an action rather than as a fixed identity politic. I get to explode or call into question what or like, what actions can make a space queer and whether or not It’s necessary for there to be fixed geographical locations where a queer body knows that it’s comfortable or welcome, but it’s interesting to think about what kind of actions queer public spaces that are not necessarily built for that kind of expression.

I was just about to say that I think the map is interesting because we all know each town has their queer monuments and gay bars, but this map actually challenges the idea of a fixed amount of queer historical spots and says that queer spaces are everywhere.

I think it also can work to debunk the queer urban myth that all queer activity occurs in these particularly coded environments. Very much my socialization as a queer person in rural Ontario was through the internet and by seeing the fact that there were other queer people who experienced the world in similar ways even if I didn’t know them. But the idea was always that I had to move to a placeand, of course, it’s much more important to be in a lived community with other queer people. But to have that feeling or that understanding that queerness can occur everywhere, not just in urban environments. It expands the myth that queerness is only an urban phenomenon.

Aside form challenging the urban myth, it also challenges the notion of “gayborhoods” especially as those are becoming increasingly gentrified spaces.

Also, what kind of queerness! I mean, the importance of specific gay neighborhoods is very important but it also, it’s become sort of one mode of a commercialized queerness or a more commercialized gay politic.

What does it mean to you to “queer” a space? That means we assume that geographic spaces are inherently un-queer.

Yeah I mean, that’s the big question of queering the map, in that, I can sort of like, attempt to describe what I think that means, but that’s primary question. It’s the call to action on the website: whatever constitutes queering space counts. So, trying to intentionally leave it very open, but in my own experience, there’s obviously the very profound stealth experience of walking in to an environment and knowing there are other queer people. If I were to define it through my experience, I think a lot of it seems to be relational to another queer body. 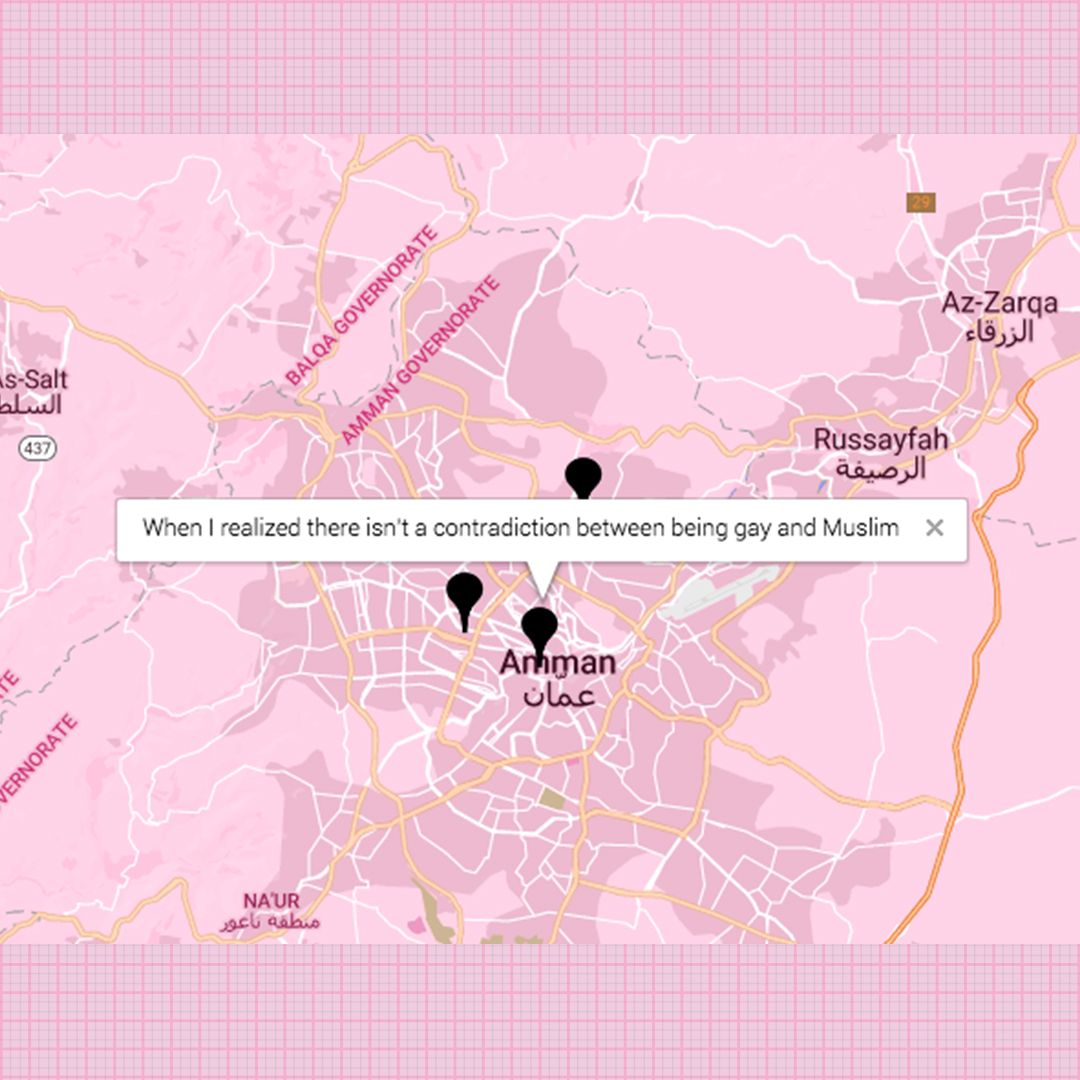 Something you said that’s interesting about it being relational, a really big conversation right now is queer loneliness and how much of queerness is defined by feeling alone, but someone’s definition of being queer might be sitting in my apartment!

Totally, and that would count! Queer negativity and queer loneliness.

Queering the Map kind of argues that queer history is all around us and that you’re always making it.

And you’re a product of it! The reason half of those things on queering the map are possible is because of the work that has been done by other queer people. It’s a product of queer history and queer activism. It’s the only reason it can exist. It’s because people fought and died.

What do you think about the queering of Google Maps? I’m thinking about how Vincent Chevalier’s “Places Where I’ve Fucked.” It reminded me of using Google Maps to talk about places that hold significant queer value to you. Were you referencing him at all?

No, but you know what’s super funny is that, I hadn’t heard about that project, but Vincent did a residency at the same place where I did a residency for Queering the Map and part of the residency project is in the same space.

What about something like Grindr, which kind of de-heterosexualizes neutral spaces and only lets you see other queer people. How do you think your project speaks to something like that?

I was working with Chase Aunspach’s essay “From the Gay Bar to The Search Bar,” and he talks about how Grindr delinks queerness from material space or the necessity of material space because it allows you to feel queer people outside of a geographic or architectural context. There’s something that is exciting about that possibility. 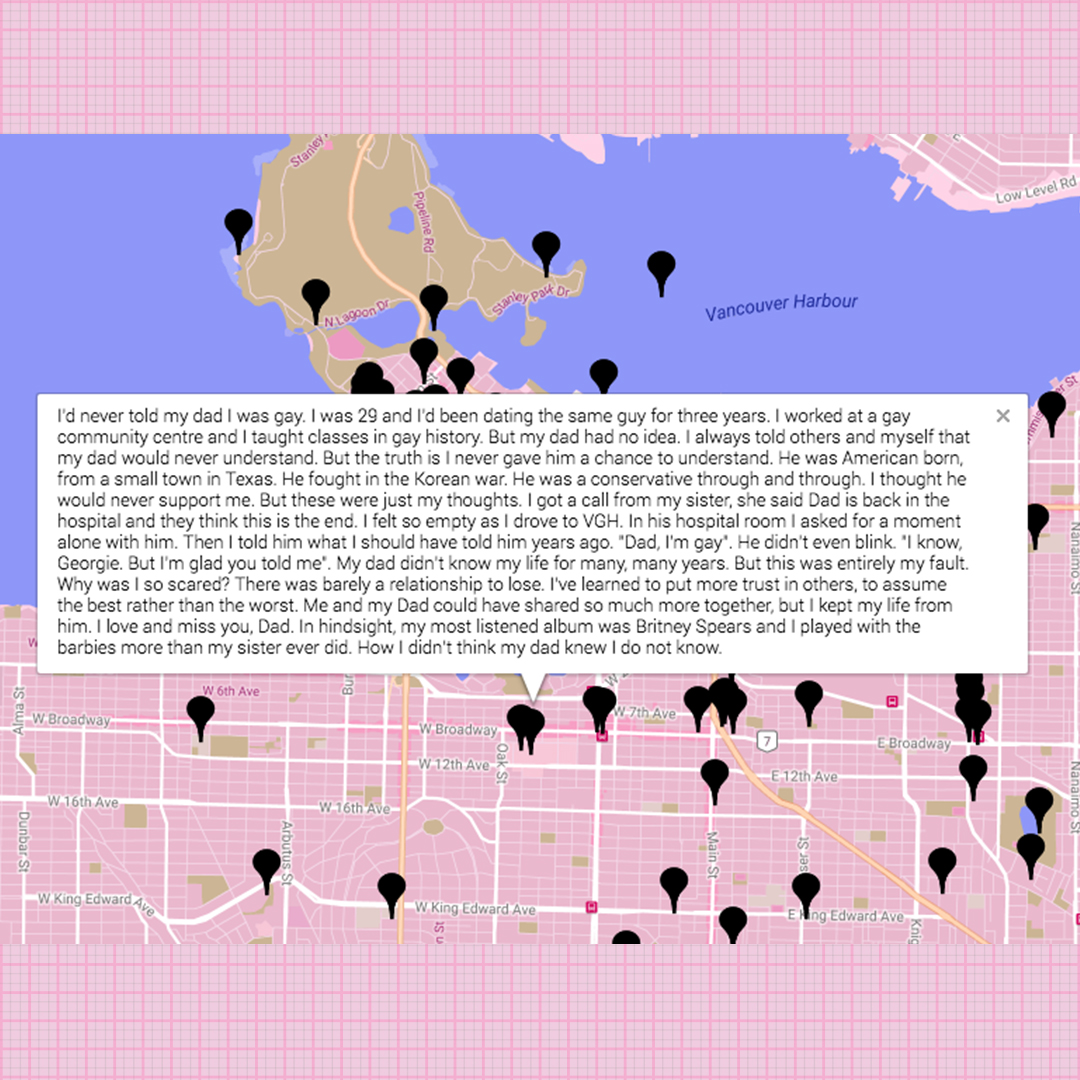 What I love about your project, as opposed to a Grindr or Chevalier, is that the focus is so much larger than sex. I think sex is an essential part of queerness, but your project also has these sweet little moments about not getting calls back or coming out for the first time. Did you envision it to go beyond sex?

I mean, in some ways, I think the things that I’m more interested in and I don’t know, a lot of my, as I’m learning and having more sex, my introduction to queer culture was less about, because I grew up in a place with less queer people around and I was so identifiably queer, I wasn’t necessarily an object of desire. I was a phobic object. So queerness became much more of an identity or mode of expression than a sexuality. And I hope and I also, I think sex is an incredibly huge and important part of queer culture, but there are many things equally as important.