Four years I trekked to the Grand Prospect Hall in Brooklyn to attend the first ever Flame Con. Seeing it described as “New York City’s first queer comic convention” was enough to pique my interest — and to entice me into creating a costume. A low key one, for sure (I was “hipster Scott Summers” which means I rocked red-tinted glasses, yellow suspenders, a blue button up shirt, and an X-Men pin), but a costume nonetheless.

The one-day affair was revelatory. The space wasn’t big, and the AC seemed to be broken, but considering I saw plenty of guys merely donning underwear as part of their cosplay as they bought prints from their favorite artists and attended panels about LGBTQ representation, it was as perfect a summer day a queer geek could hope for. I returned to the con’s fourth iteration — now a two-day affair at the Sheraton in Times Square — and found that what made that first con so special hasn’t disappeared. As a budding annual tradition, Flame Con represents as expansive and welcoming a vision of the queer geek community as you could imagine.

Credit for that goes first and foremost to the organizers who really take issues like accessibility and harassment seriously. From the moment you step into Flame Con territory and you see body positive and gender-neutral versions of the con’s mascot (a fiery superhero with rainbow attire) you are encouraged to think as broadly as possible about what constitutes the queer — let alone the queer geek — community. After nabbing your wristband, you can pick up a preferred pronoun sticker to wear around the con. The immediate purpose would seem to be to avoid being misgendered but, in turn, the stickers make you extra aware of gender presentation at a queer con.

Flame Con’s clear-cut harassment policy, which stresses the dictum that “Cosplay is not consent” as well as its “no toy weapons” policy (“because guns are not toys”) puts people’s safety and comfort above everything else. That’s no small feat when catering to a community that across the country still faces violence and discrimination and in turn struggles to find safe spaces. Add in the fact that geek and comics culture writ-large continues to offer some of the most blatant examples of targeted harassment against minorities (see “Comicsgate” for its most insidious version) and Flame Con’s open tent approach to its community-building seems all the more inspiring.

Moreover, to look at the con’s program is to see an expansive vision of queerness and geekdom alike. The con doesn’t operate from the question of how queerness and geekiness overlap but from the assumption that they inevitably do. That explains why, forgoing many of the Queer Geek 101 panels that characterized its early iterations, this year’s programming felt much more capacious, encouraging attendees to listen to creators in panels such as “Black, Queer, and Nerdy Womxn,” “See You Upon Rivers and Lakes: A Conversation About Wuxia,” “Asexuality in Media,” and “Invisible Latinx: Flame Con Remix.” Intersectionality isn’t merely a buzzword at the con — it’s its integral guiding principle.

But Flame Con’s essence is perhaps best understood by the cosplay it celebrates. With a cosplay corner as well as a daily cosplay contest, the floor was often full of inventive riffs on pop culture icons that displayed exactly what LGBTQ fans bring to the table when they consume and geek out about mainstream pop culture. From wholesome to nearly R-rated, from obscure to overdone, the parade of cosplayers merely reflected the wide variety of interests of Flame Con attendees. While walking the floor over the weekend, I saw a red Power Ranger costume that would’ve looked right at home at an underwear party, a crossplay of Ariel that opted out of showing skin and went instead for teal regal realness, a femme Steve Rogers (donning a rainbow-splattered shield) in full Captain America apparel, and eerily accurate takes on the gods from cult comic The Wicked + The Divine, those Mars Attacks! aliens, and even Laura Dern’s The Last Jedi character, Vice Admiral Holdo. 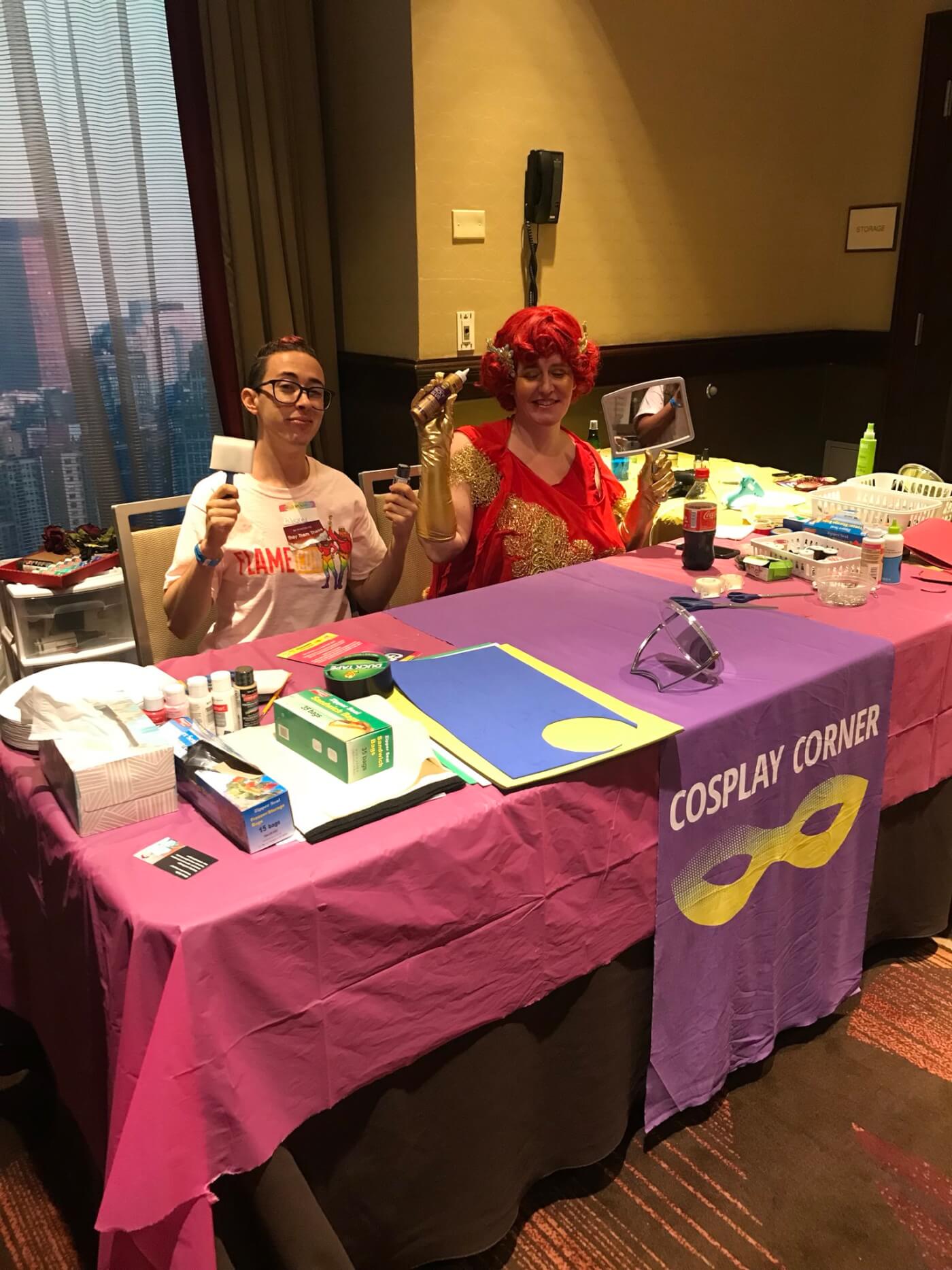 Here was a vision of queer fandom that didn’t have to be premised on fighting — for visibility, for representation, for happy endings, for joy, though those indeed were amply discussed in various panels throughout the weekend — but instead merely on enjoyment.

In fact, every person I encountered at the con, no matter how tired they were or how busy the floor was at any given point was unmistakably happy to be there. For it represented a kind of queer utopia that no doubt seemed unthinkable even just a few years back. It’s what prompted the likes of cartoonists/illustrators Terry Blas and Andrea Kendrick to openly grapple on Twitter with why Flame Con felt like such an emotional weekend.

“For me,” Blas wrote, “stories are about connection. We read books and watch shows and movies to feel connected. Stories we can find ourselves in are what we crave because they make us feel seen and heard. They make us feel less alone.” Spaces like Flame Con make queer stories ubiquitous. That means they build a community — a “pride” to use Blas’s intentional lion-inspired pun — that does not merely normalize queerness but engenders its all around.

To walk around the floor was to see family-friendly graphic novels being sold near R-rated fan-fic featuring everyone’s favorite Cap, queer tarot cards next to Drag Race prints. I saw a throng of kids walking with their parents picking up Steven Universe merch and queer ladies buying up zines about blood bans in the US; cosplayers gleefully posing with one another and people who’ve likely been dubbed “weirdos,” “fags,” and perhaps even worse walking around surrounded by similar-minded folk.

Therein lies what’s made Flame Con an ever-growing con: it refuses to box in either queerness or geekdom and understands crucially how the two are irrevocably intertwined. It all adds up to a truly joyous experience that, as the participants in “The Subversive Simplicity of Queer Joy” panel pointed out, ends up being quite radical in the way it fights back against decades-long stereotypes of what kind of queer stories we’ve been told we can tell, we can celebrate, we can live out.