It’s January 2007. Rami Malek stands in a garage with a Vietnam veteran, smiling, his arms waving, body swaying in a femme dance to the brassy beats of the Village People’s “Y.M.C.A.” Rainbows burst, literally, from his ears and fan out — presumably to the rest of the room, smearing technicolor light onto its contents, the walls, the floor.

A few seconds later, the fantasy breaks — but in a hilarious moment for Fox’s short-lived comedy series The War at Home, Malek’s character Kenny, an Arab-American teenager, comes out to his neighbor. “I guess I’m saying I’m gay,” he says, still grinning and goofy.

This week, the Emmy-winning Mr. Robot star will debut in theaters as another queer character. This time, he’s playing the real-life Freddie Mercury. As critics debate whether the long-awaited Bohemian Rhapsody’s Queen frontman will be queer enough, we must also question whether Malek is allying enough. The Egyptian-American star’s rising fame has positioned him at the perfect nexus to speak up on behalf of queer people in Egypt — but will he do it?

In September 2017, Malek donned a wig and the now-infamous teeth to transform into Mercury for the first month of filming. Naturally, they began at the end: The Live Aid concert, the 1985 behemoth event where fans from across the world displayed their devotion louder than ever before, stomping and clapping and screaming “We Will Rock You” as Mercury flailed himself about the stage. Queen stole the show.

As the filming began, another concert made history. Lebanese band Mashrou’ Leila’s performance at an Emirati-owned mall in Cairo prompted two activists to clamber atop shoulders and set loose a rainbow flag. The indie band’s frontrunner Hamed Sinno is openly queer and sometimes called the Freddie Mercury of the Middle East, and for many, the music he performs is queerness made audible. It’s not totally unfiltered, not perfectly unmarred by Western ideas. Still, the voice of a brown man lamenting the loss of a same-gender lover is a revolution, an assertion of existence. The rainbow waving proudly over a sea of Egyptian fans was testament to that. 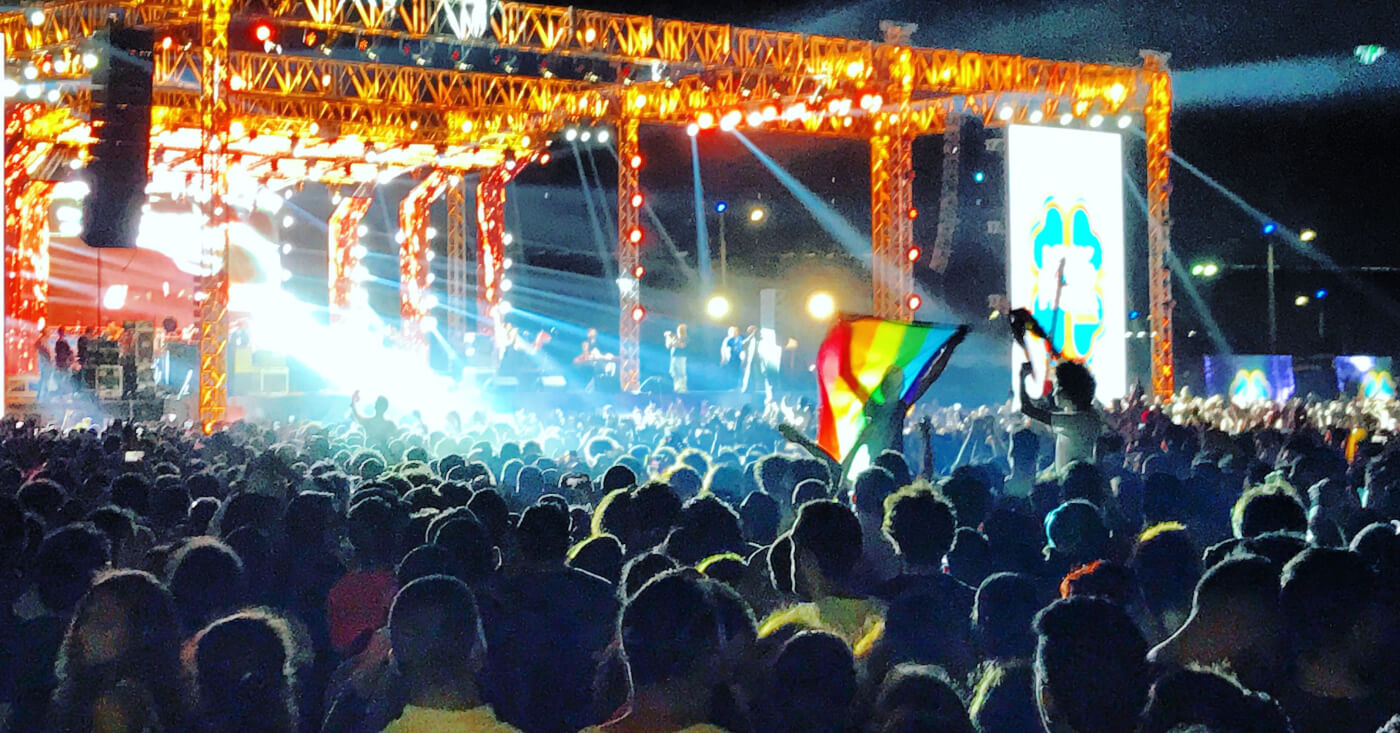 But in Egypt, homosexuality is policed through laws that criminalize prostitution. After the Cairo concert, images of the flag circulated on social media; then, the arrests began. In less than a month, the Egyptian government had arrested more than 70 people — the largest mass arrest of LGBTQ people in the country’s known history.

Throughout all of these arrests — which have slowed, but not stopped — Malek has remained silent. But he has spoken up in support of the Egyptian President.

“President Abdel Fattah al-Sisi deals with Egyptians as equal citizens, regardless of their religion, which is the right thing to do,” Malek said in a 2015 interview with Egypt Independent.

It may have been a benign statement, a gesture of hope in combating terrorism. But many were upset at all that Malek did not say: That the uprooting of the beginnings of democracy, the silencing of journalists, the human rights abuses and torture, and the continued campaign against LGBTQ people, to name a few, have made Egypt not a place to live, only a place to survive.

When I visited Egypt this summer, most people I met had deleted dating apps out of fear that police would find them. The few who had returned to Grindr and Tinder risked being detained or questioned — and outed to their families, fired from their jobs, beaten and raped in prison. Gay men had nearly no access to PrEP or PEP, and queer people had to find doctors who wouldn’t report them to the police. Nearly every LGBTQ organization had already been shuttered — a common move made by repressive governments to fracture queer communities. Only one, the Egyptian Initiative for Personal Rights, remained able to officially work on LGBTQ rights.

Soon after the arrests began, the EIPR released a report detailing how the crackdown had actually started before the concert — since President Abdul Fattah al-Sisi took power in 2013, at least 232 people have been arrested. But it’s not just the Egyptian government that’s the problem. The United States grants Egypt the second-highest amount of foreign aid in the world — about $1.3 billion in military aid each year. When the government cracks down violently on anyone, U.S. taxpayers are complicit.

It might seem unfair to ask Malek to speak up against this, while he is still carving a career for himself as an actor of color in white Hollywood. But that is exactly what liberation asks of us: to say hard things, to denounce hate and evil, to make art not just for art’s sake but in ways that advance the ability of people to live — not behind bars, and not fearing violence.

That is, after all, the reason that the queer world is so invested in the story of Freddie Mercury — to claim as queer a beautiful man who made great art, to assert that other queer people should have a future, a right to exist and thrive. 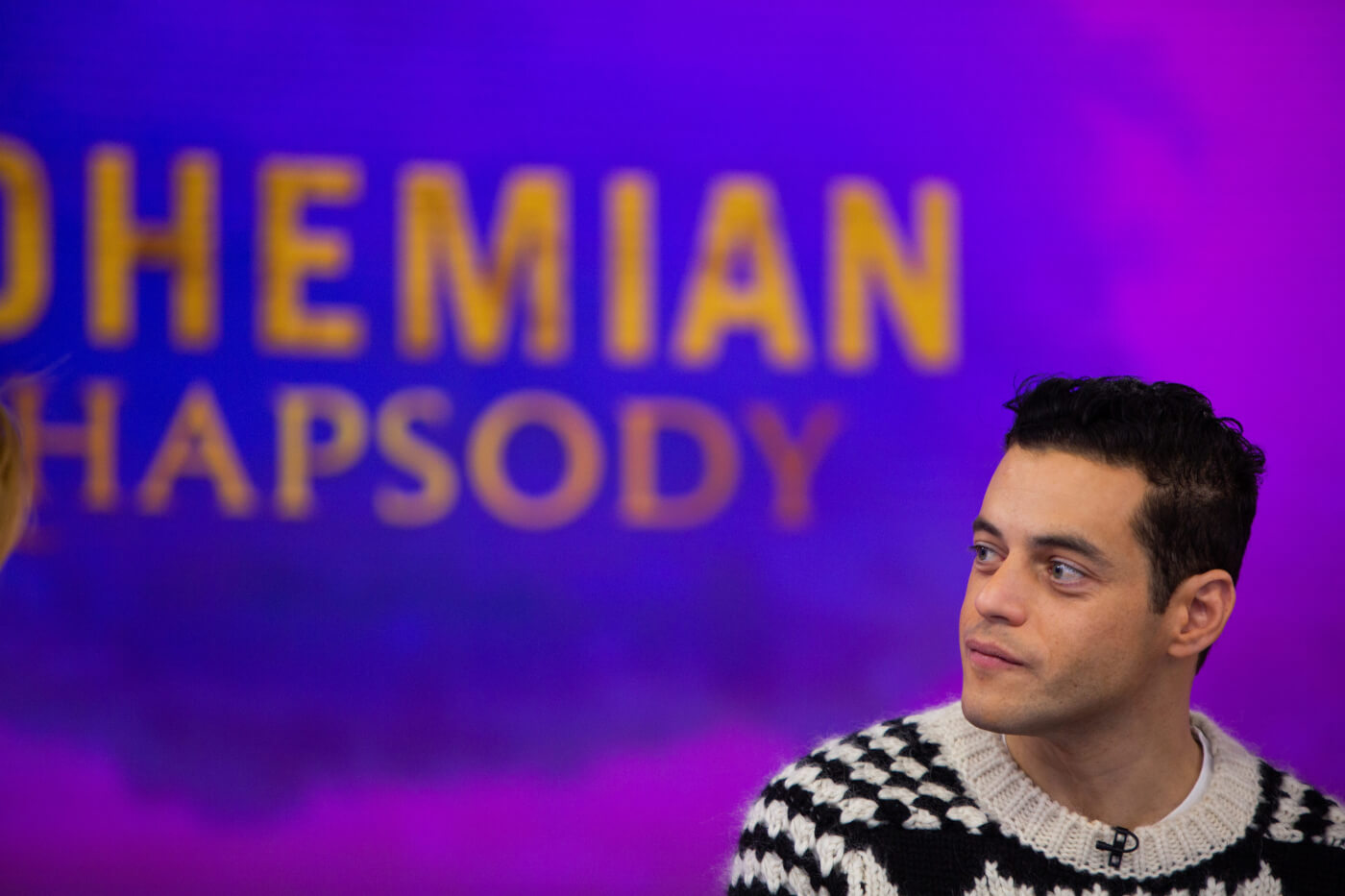 Malek’s voice could be an invocation of that future — but as it stands, his silence speaks to an artist without a politics. While Mercury lives on in our heads as a queer icon whose camp theatrics and everyday language –remember how he called people darling? — asserted that he always be seen and heard as a sexual and artistic revolutionary, we see cracks in the facade of the actor playing him — despite early reviews maintaining that Malek’s performance shines. We see only another straight actor taking up a queer role–a performer who refuses to let the rainbows dripping from his ears really flow out and color the world outside, queering everything.

In an early interview about playing a gay character in The War at Home, Malek said that he sought advice on playing queer characters from the show’s creator, the openly gay Rob Lotterstein, who told him to imagine if he lived in a world where he had to come out as heterosexual.

“He was able to help me out with the thought process of what’s going on for someone who might be dealing with this — the confusion, the guilty feelings, angst, all that turmoil,” Malek said. “The ability to reveal this at such a young age is such a bold, courageous thing that I felt he really wanted to explore and share, and I’m very glad that he did because it’s hopefully having an impact on a lot of young people out there.”