There’s an art to entering Drag Race. And so much depends upon a good entrance. Queens have to hit their mark, look glamorous and deliver–as All Stars 3 winner Trixie Mattel once said in an episode of UNHhhh!–a catchphrase!

How did each queen fare for their Season 10 workroom entrances? Here’s a quick ranking with initial impressions of each queen. 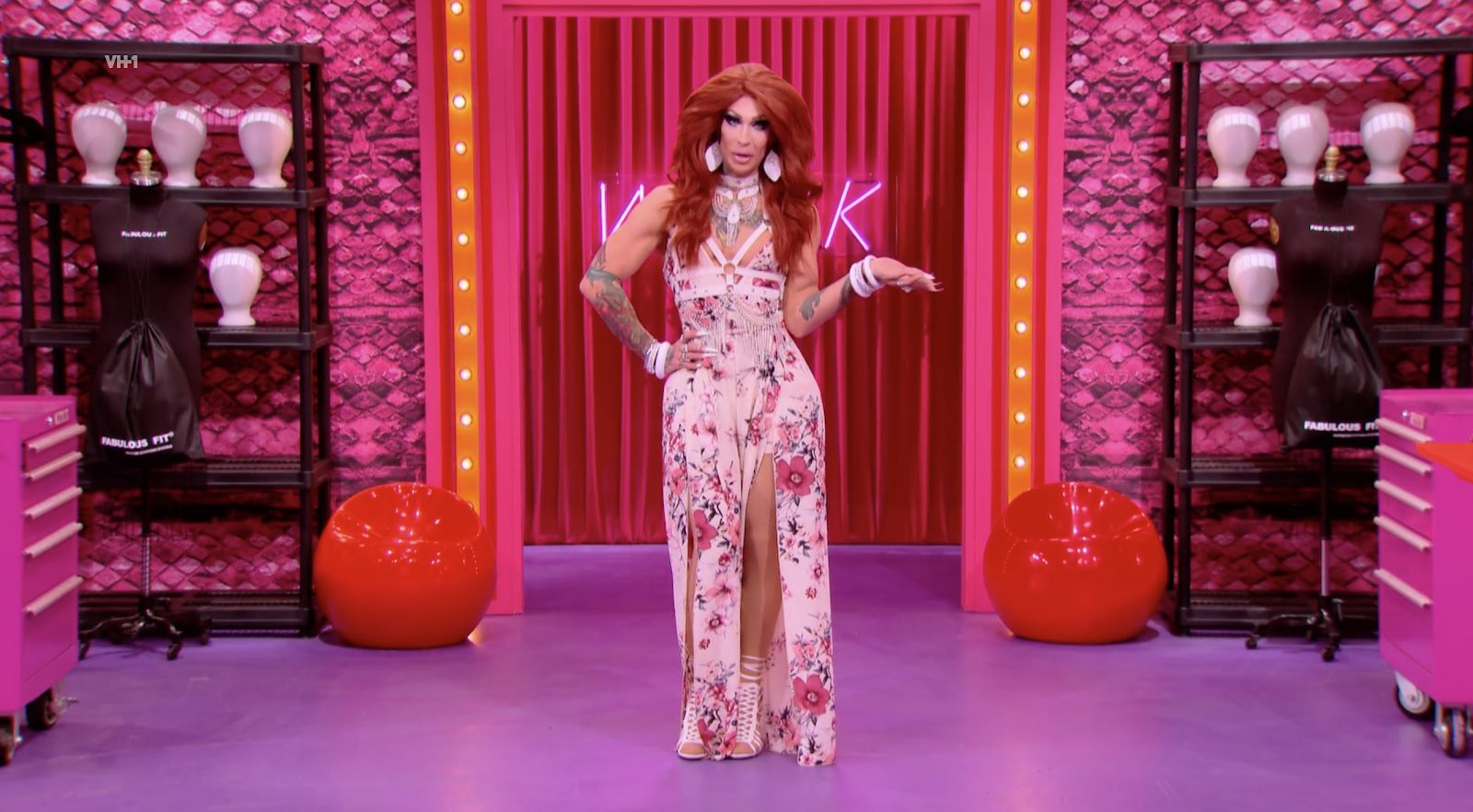 “Well, I auditioned for pit crew. But this is going to be way more fun.”

We get it. You work out? Kameron Michaels has no problem playing up that, out of drag, he’s a total Insta thirst trap. That attitude combined with the Adam Rippon-esque pseudo-harness meets off-the-rack dress makes this look a bit forgettable. 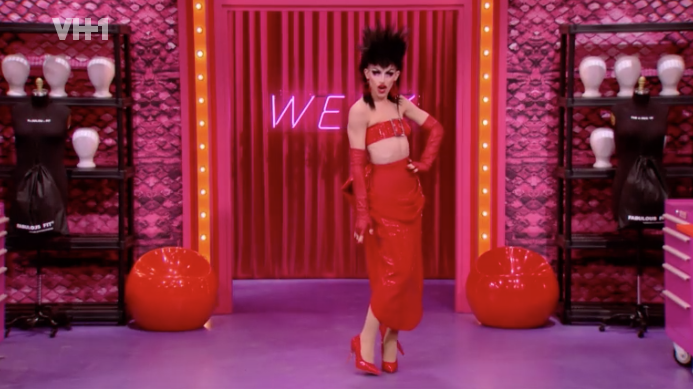 “Bonjour! Sorry to keep you waiting!”

Aquaria’s look is high fashionin the making. She looks to have all the tools but needs to reread the manual. An up-do and red pumps? Cool? And while a little confidence goes a long way, her confidence careens into cockiness territory in an off-putting, rather than endearing, way. And her catchphrase? N’existe pas. 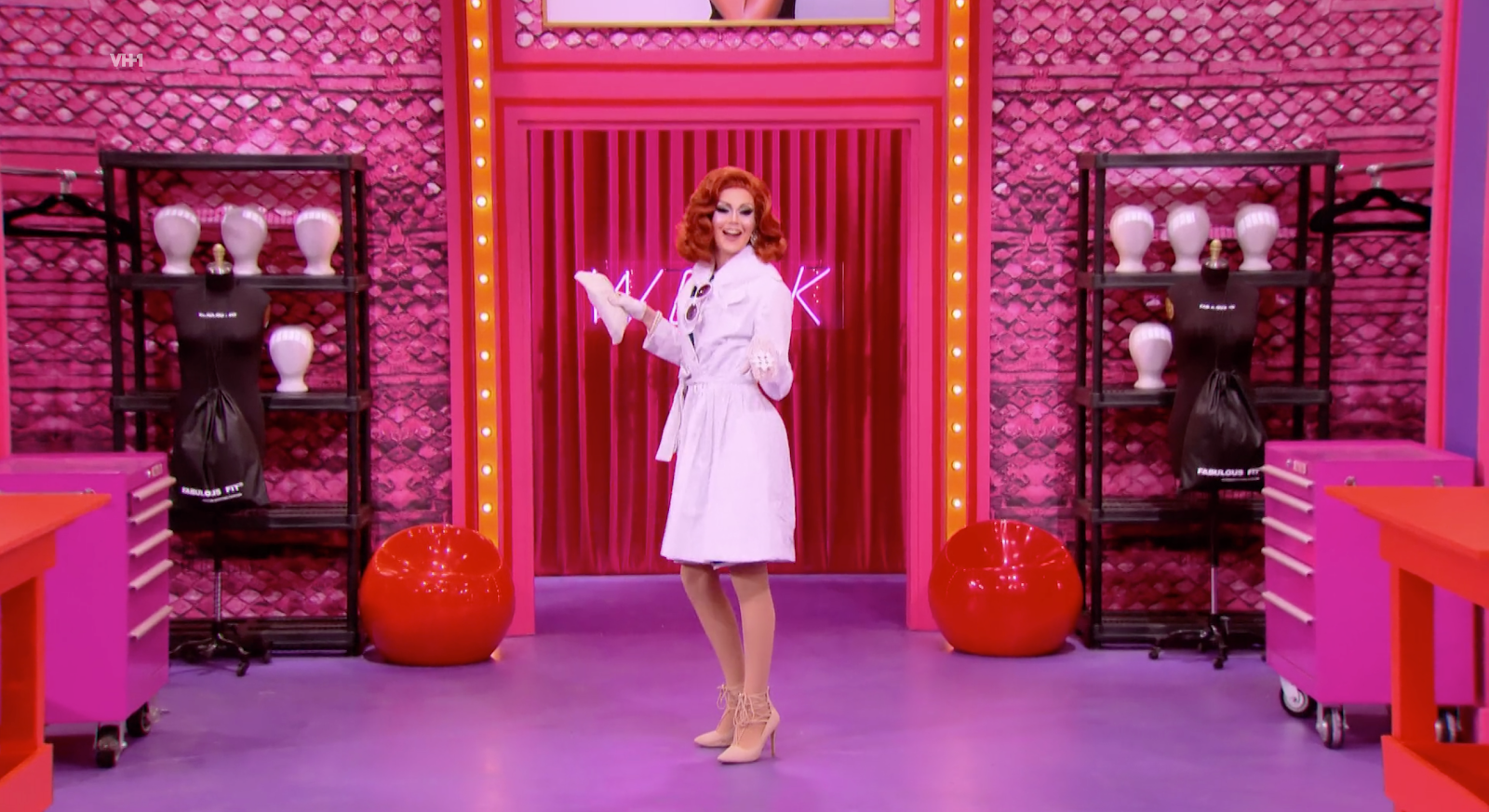 Ms. St. Clair isn’t keeping it a secret. She just got off the bus with her three bucks, her two bags, and her one me. And while she goes for big, her look and entrance mostly fall flat. 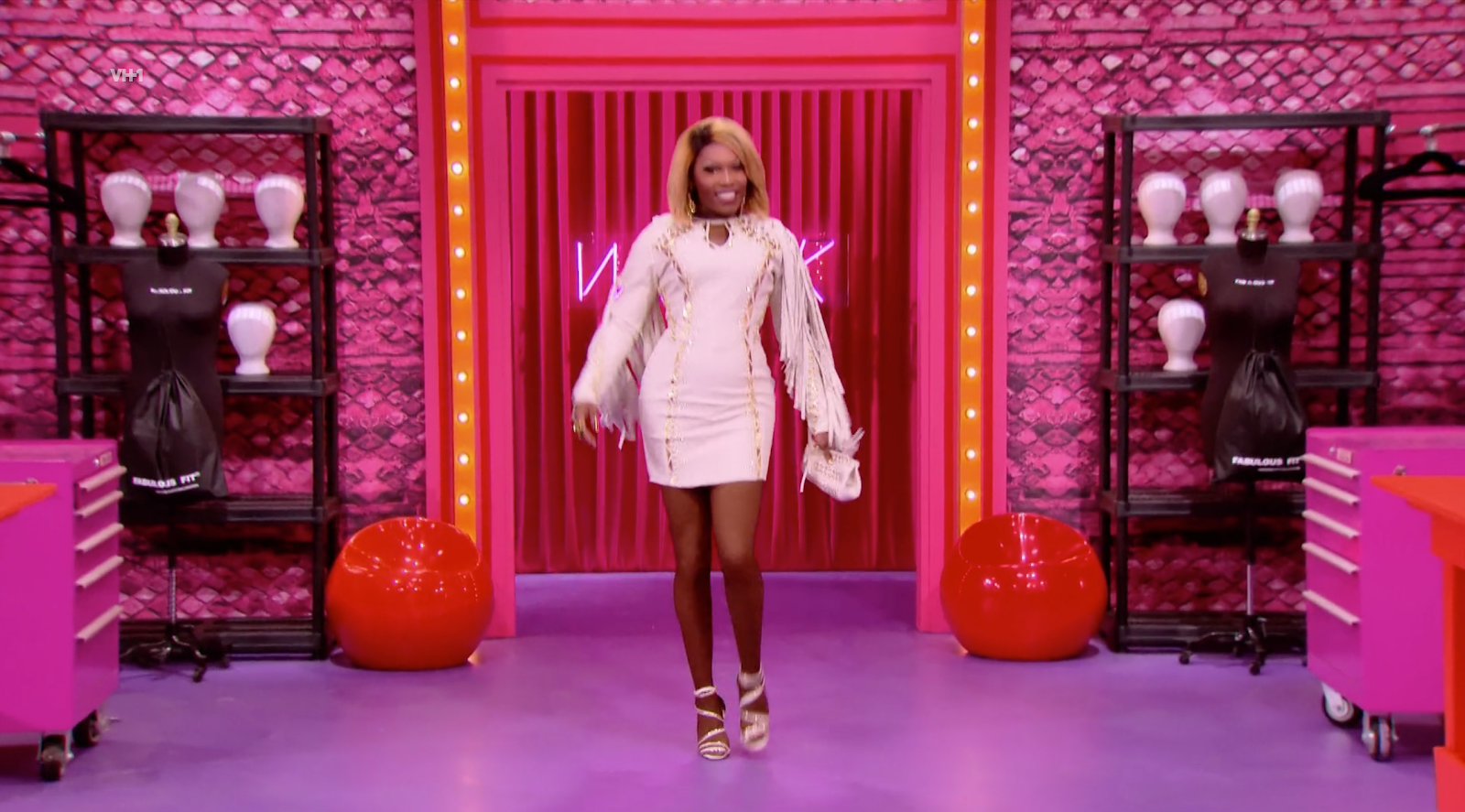 “Well, guys, Texas is back in the house.”

Asia O’Hara comes in with an elegant, understated look. Her Texas catchphrase may not be too memorable, but she definitely presents herself as a queen who is about substance over sayings. O’Hara seems like Trinity Taylor: a girl who can use her pageant skills and know-how while also bringing something extra to the table. 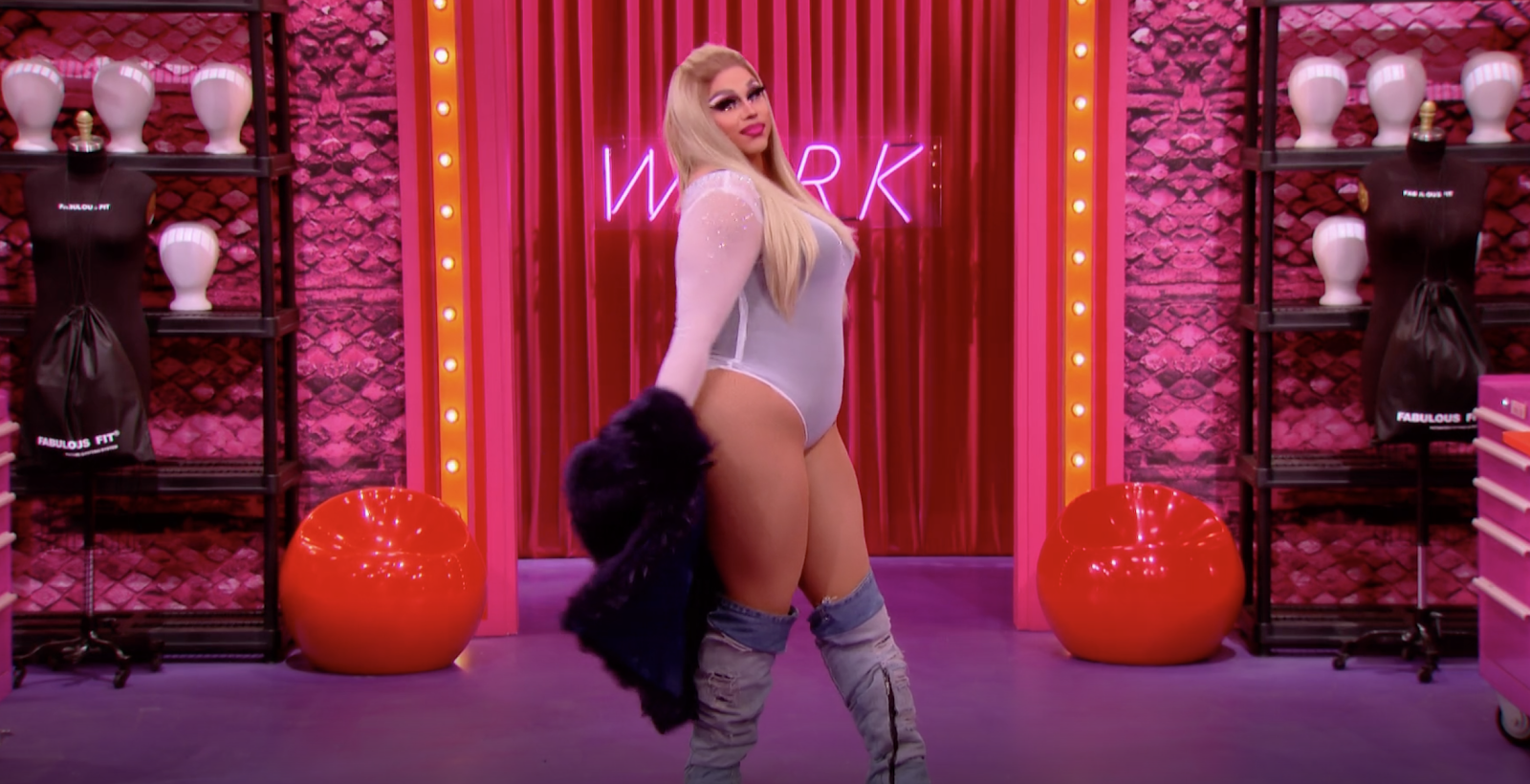 “Hope you’re ready for your all Karb, high Kalorie diet!”

Kalorie’s look is the least polished, but as the self-professed “twerk queen” of the group, it’s also perfectly suited to the aesthetic. Also, never underestimate a queen who comes through in a denim boot with their booty clapping. She’s the only contestant that got a “Yes, ass!” from the girls when they walked in. 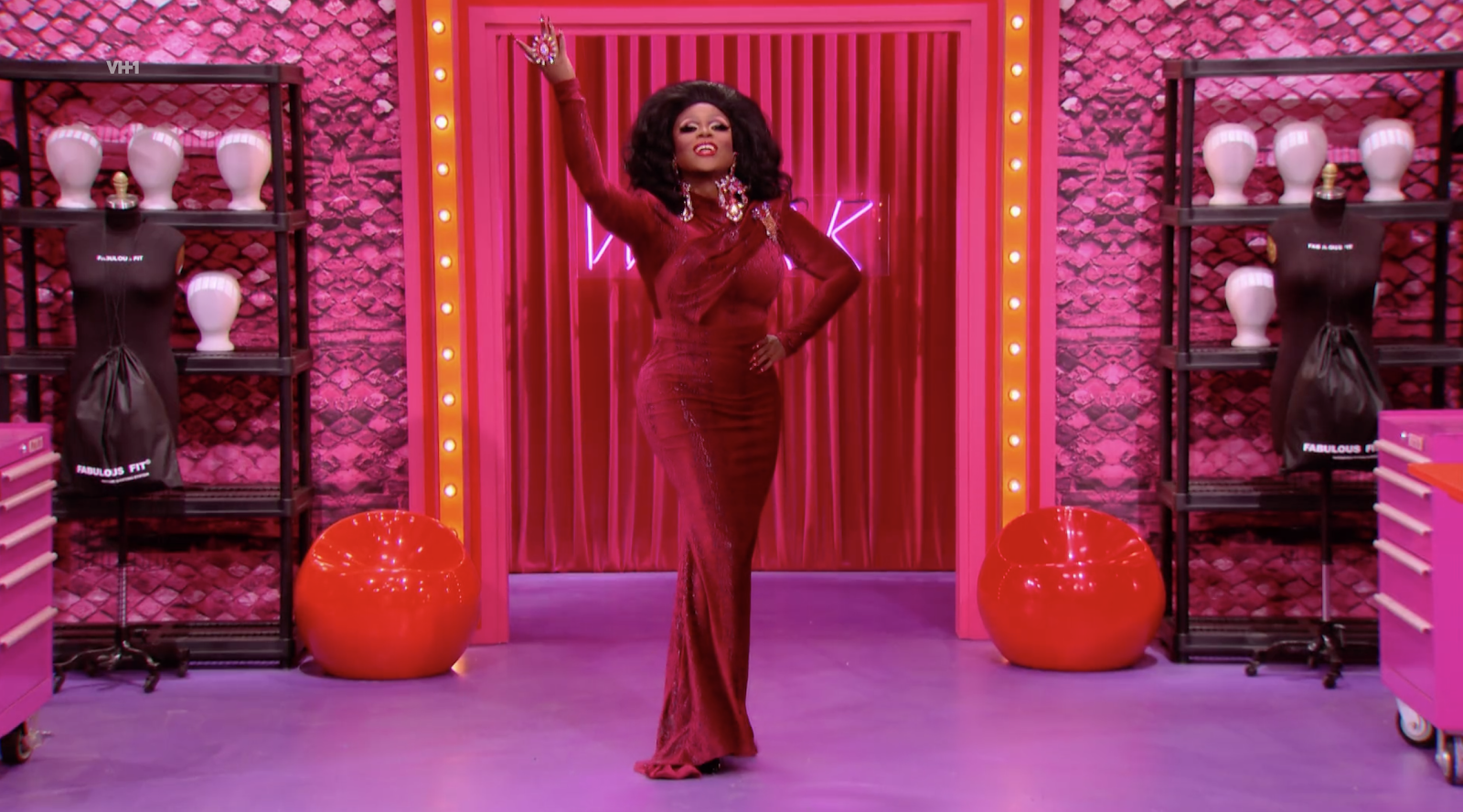 “Guess who finally decided to crash the party.”

Miller has the sass, class, and body to go far in Drag Race. Her intro look may look too old school for some, but the padding and curves are for the gawds. Miller is also giving us Shea Coulee levels of confidence. Like Coulee, Miller’s a little bit cocky. 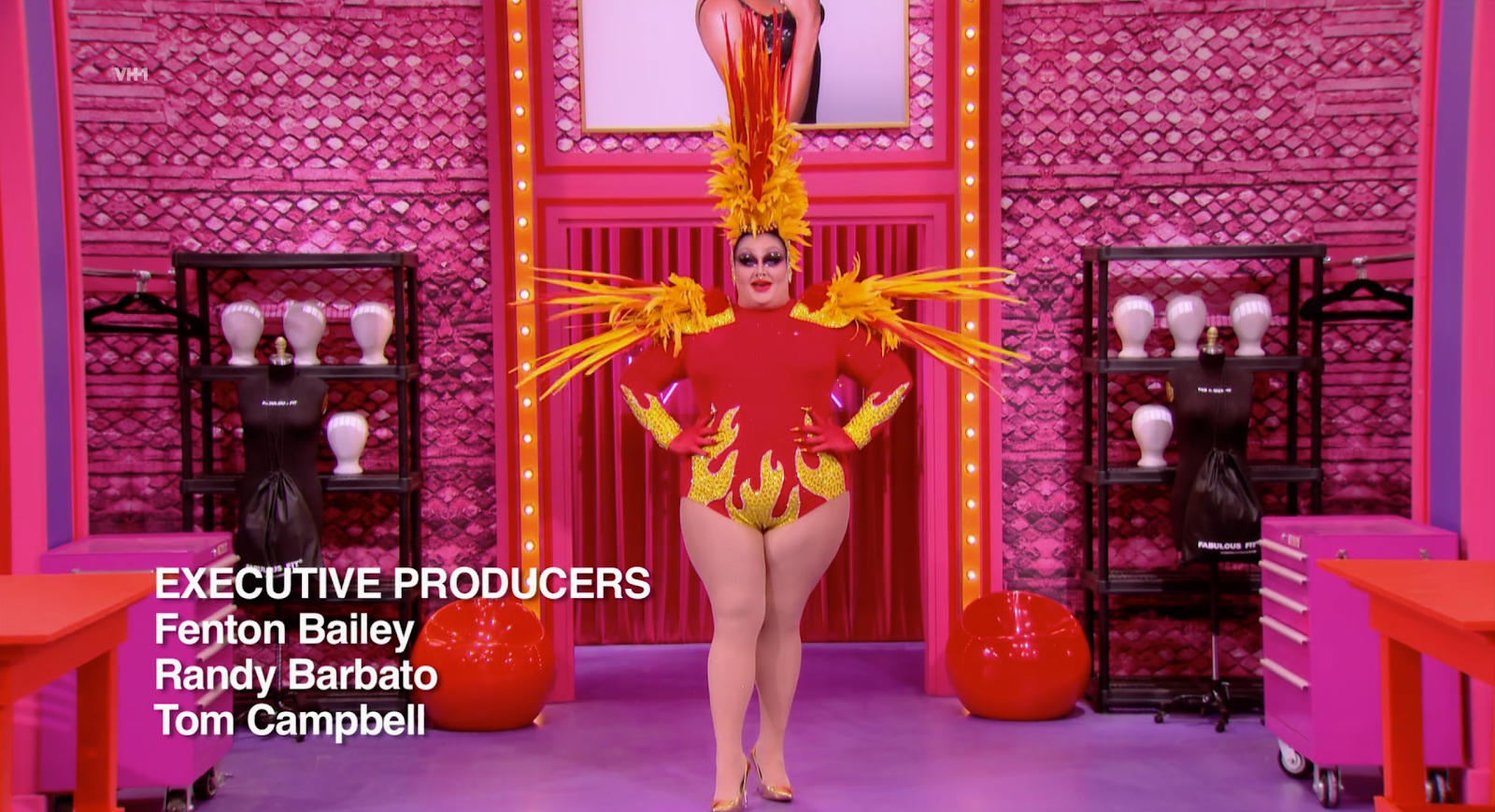 “Like a phoenix from the ashes, Eureka is back!”

The first to enter the workroom is (no surprise) Eureka O’Hara, who was guaranteed a second shot at the crown after bowing out early in Drag Race Season 9 due to a cheerleading-induced knee injury. Her catchphrase, look, and theme are all cohesive, bold, and over-the-top, but still able to impress, which is hard to pull off a second time. 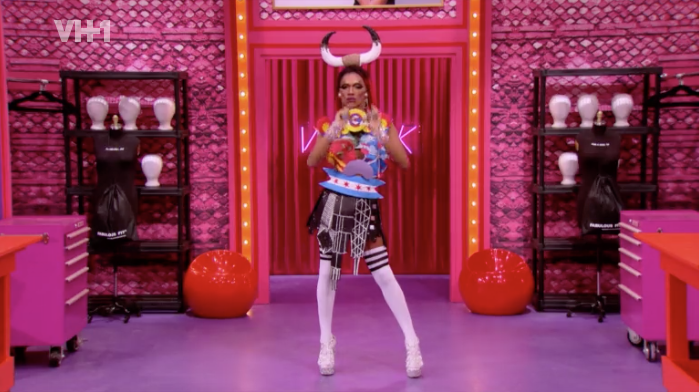 The Vixen’s opening look has a lot of great ideas–emphasis on a lot. We wish she’d taken a moment to edit at least one part of it out. But the outfit is still an iconic one, even if it’s overdone. More so than any other queen, The Vixen understands how to make a meme and her “I’m just here to fight!” will get the job done. 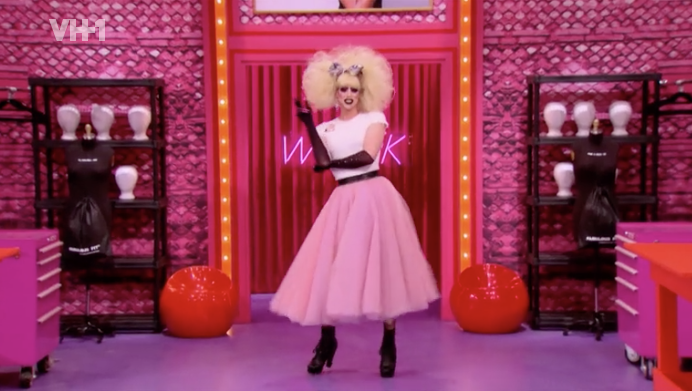 Dusty Ray Bottoms’ goth girl look gets everything right about goth meets pretty meets drag (something I felt I was missing from BenDeLaCreme’s goth look.) Her bonding with Blair St. Clair over their musical theatre affinity is charming and she just seems happy to be here. We can get behind Bottoms. 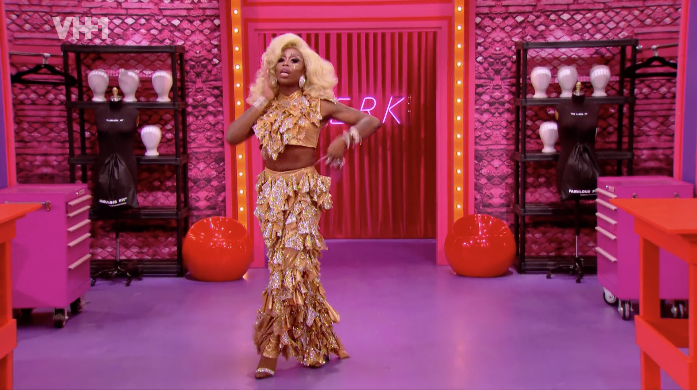 “Bringing you the heart of Season 10, honey Monique Heart.”

Monique Heart’s dance moves and glittery two-piece are fully serving us Nomi Malone and we’re eating it up. Monique is refreshing because she seems to be there to celebrate her drag and doesn’t yet have daggers in her eyes. She’s totally lovable during her confessions and her big hair and sparkles bring the glitz and the glamour. 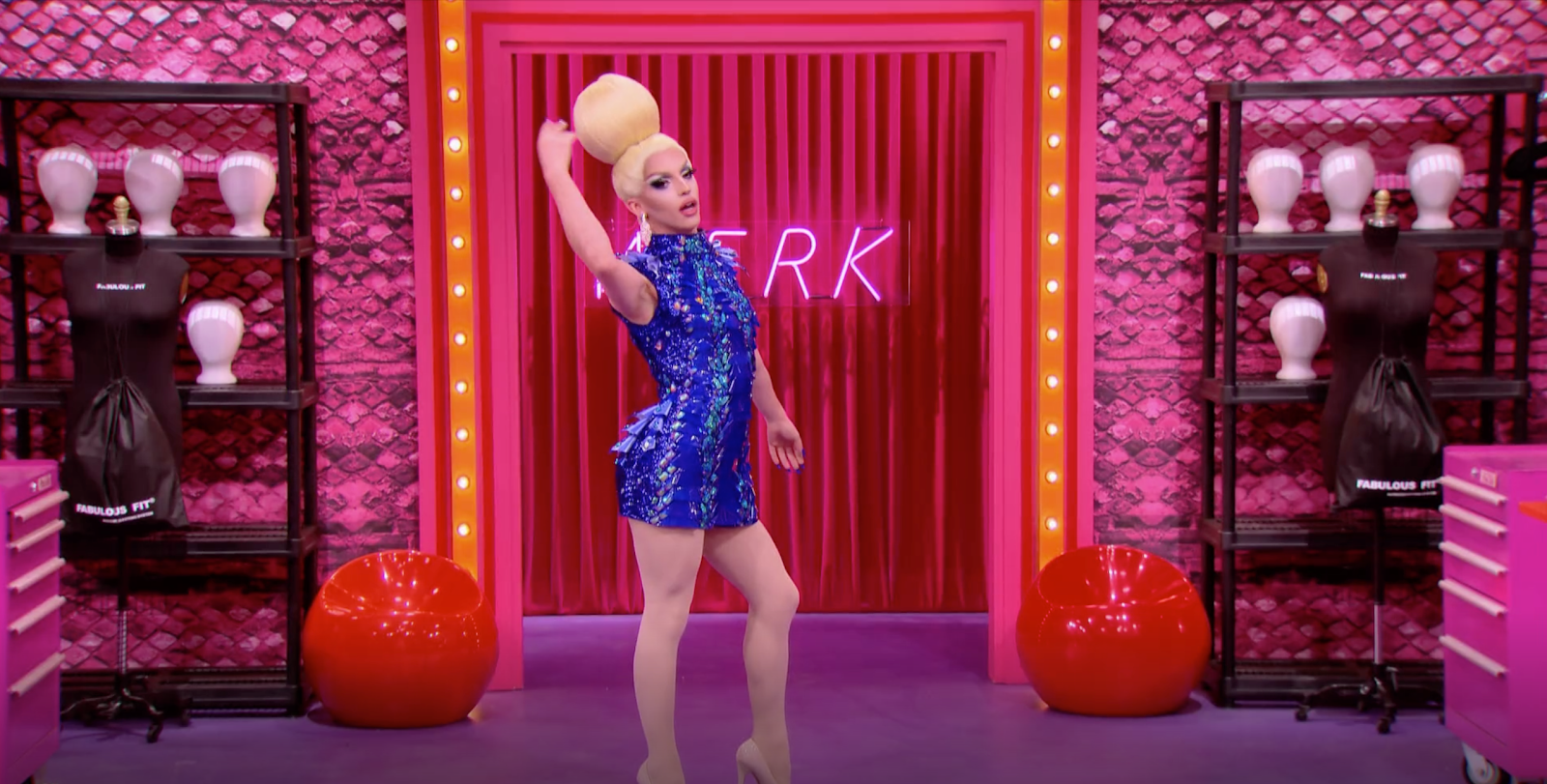 Cracker brings a little too much charisma in her entrance. But her shout-heavy, Mrs. Kasha-Davis-esque homemaker catchphrase is memorable. And her outfit is the perfect blend of show-stopping and restrained. It’s pretty and not gaudy. On the other hand, did we need that many turns and mugs to the camera? 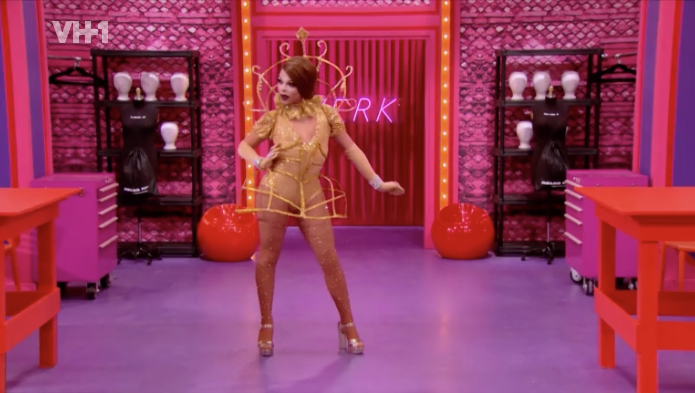 “Tens, tens, tens across the board!”

Alexis Mateo’s drag daughter has charisma to spare and while her look is a *little* basic, it’s the right kind of basic. It’s well-constructed, glittery and looks like if 2009 Lady Gaga did a pre-revolutionary France video. We’ll tune in to see more! Is her catchphrase the most original? No! But her delivery slays. 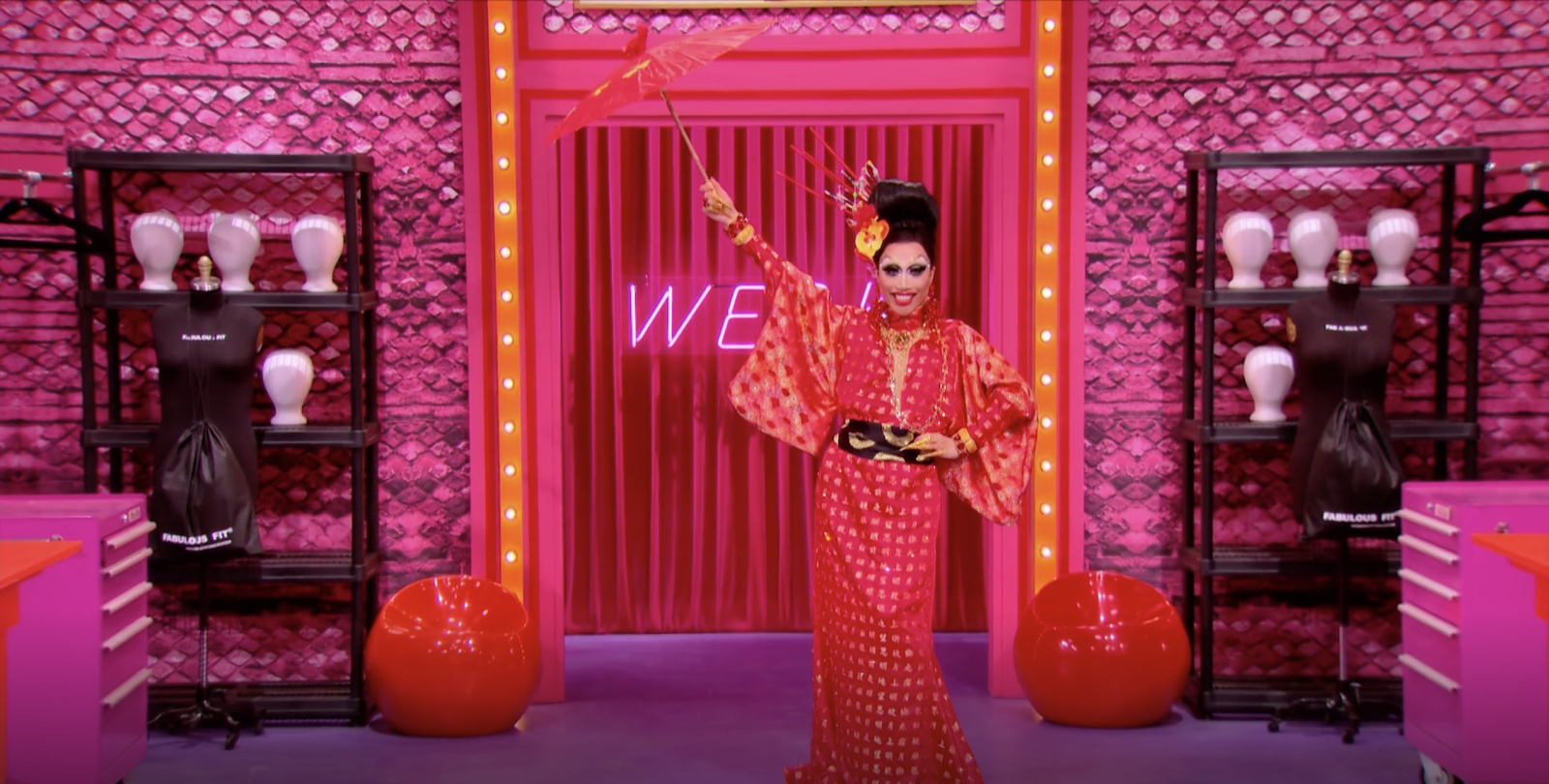 “Can you feel the shade?”

Hamasaki is able to harness her energy without going over-the-top like Miz Cracker. Her paper umbrella only enhances her (kinda tired) shady catchphrase. Her look is polished, but it definitely feels done before. Or maybe that’s just our hangover from the Madonna kimono challenge? 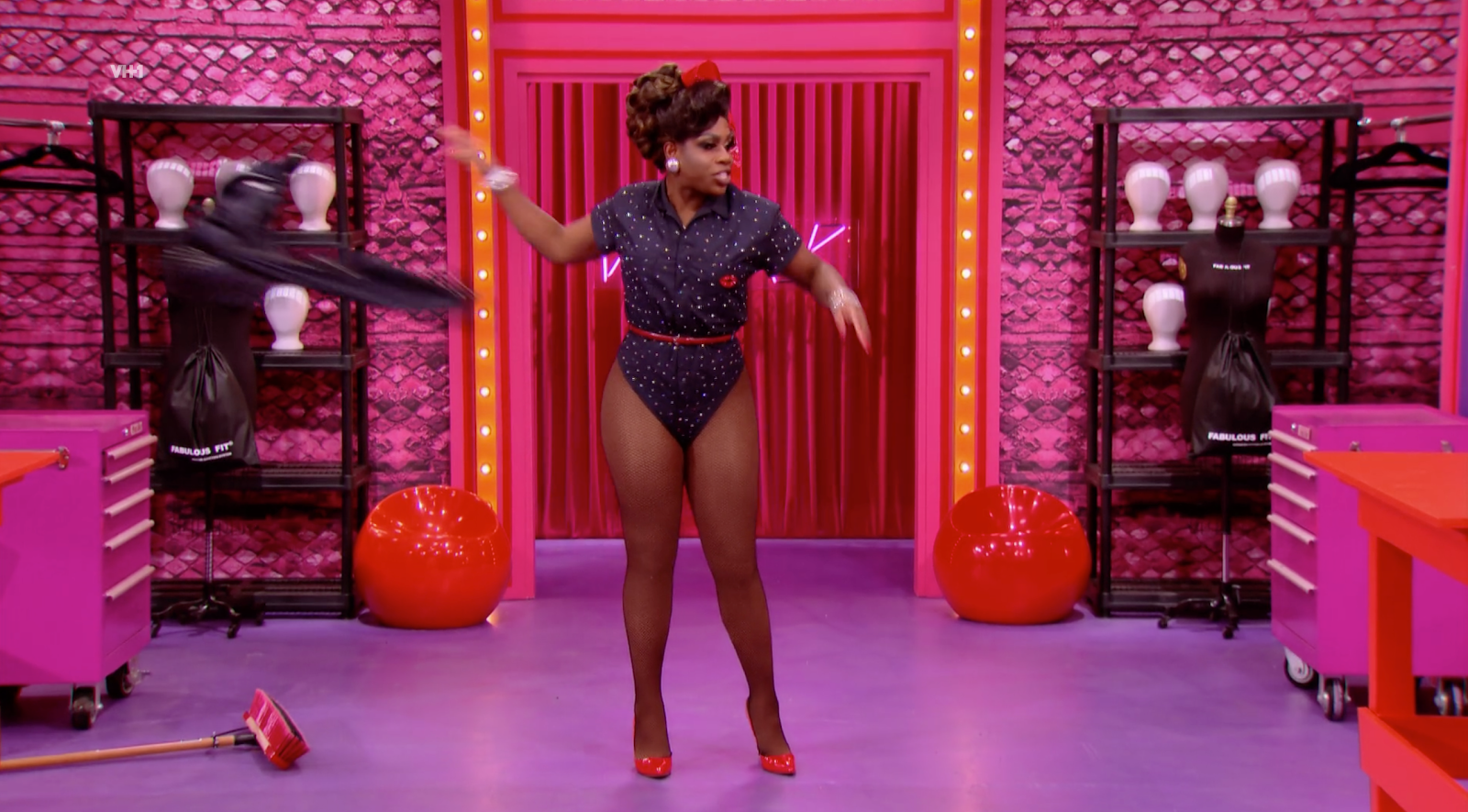 “Oh, don’t mind me, I’m just here to sweep up the competition.”

People often drag out Coco Chanel’s famous “edit” line when they’re talking about people’s outfits, but they can also be about entire performances. Look no further than Mimi Imfurst in season three, who was told that she brought out way too many drag tricks during the workout video challenge. But Monet X Change knows how to do a lot in one simple introduction without doing too much. She gives us a catchphrase, enhanced by a prop and a reveal. And it never feels too much. It’s just kind of perfect.