If you consumed pop culture between the years of 1997 and 2001, you inevitably had an opinion on Anne Heche. As one half of America’s first openly gay celebrity power couple, Heche dominated cultural discussion to an almost voyeuristic degree, standing arm-in-arm with Ellen DeGeneres as Hollywood reckoned with the first hints of mainstream gay representation. Then they broke up; Heche had a breakdown, and within a year had married a man.

Through it all, Heche was talking – about her sexual fluidity, her childhood sexual abuse, and the resurfaced demons that led her to a mental health crisis. What she faced in return was mockery, bullying, and misunderstanding. Since the peak of her fame, when honesty and openness brought to a standstill what could have been, and should have been, an A-list career, Heche has continued working, raised a family and found success on Broadway and in TV. But her treatment at the turn of the millennium not only warrants reappraisal in an era of greater understanding of mental illness and the vast spectrum of sexuality, it also warrants an apology. 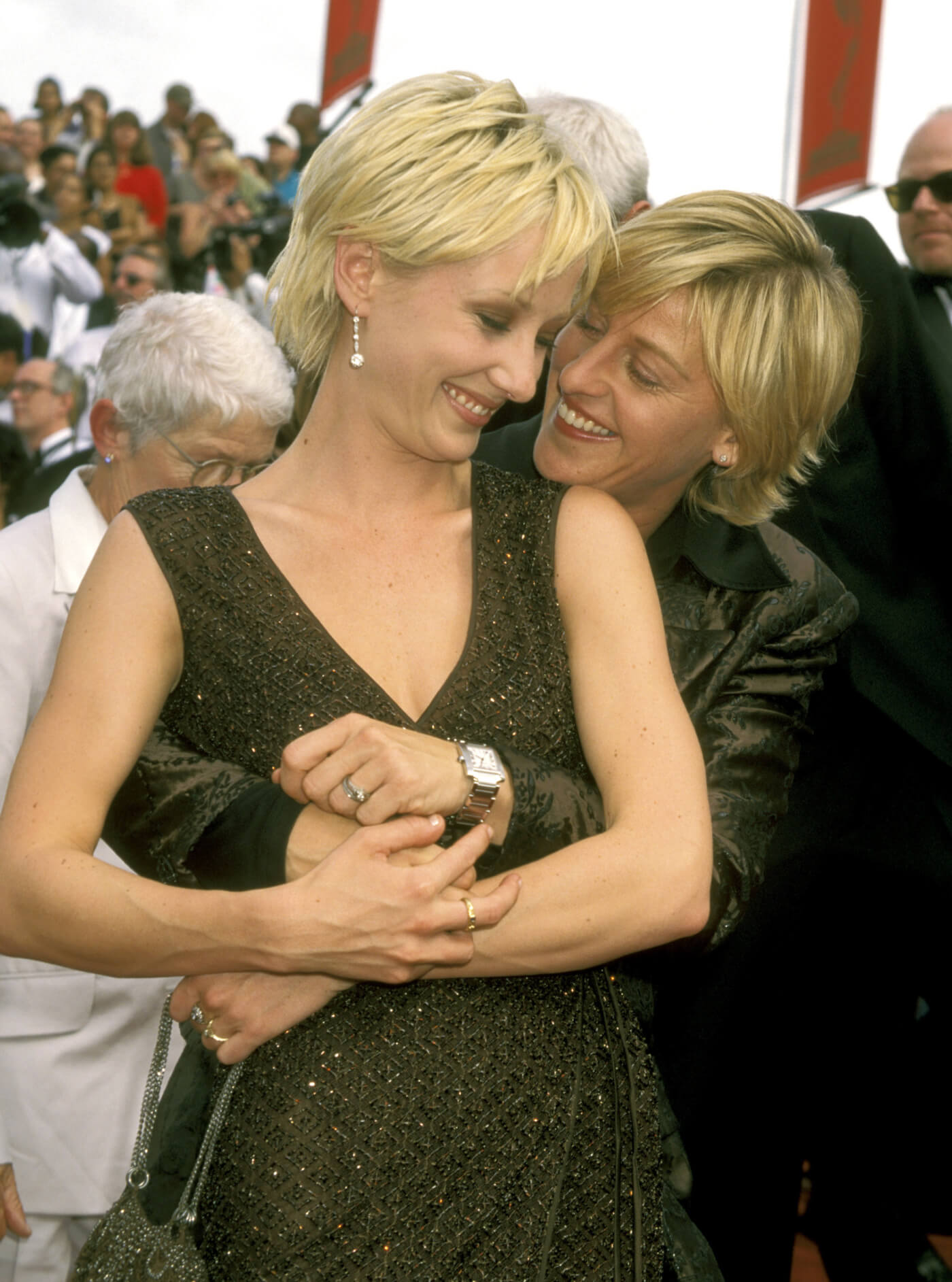 The importance of Ellen DeGeneres as an LGBTQ icon has never been questioned. Her coming out in 1997, at the height of her sitcom fame, opened the doors for every bit of queer representation in today’s mainstream sphere. A landmark sit-down on Oprah Winfrey’s couch that year, in which DeGeneres softly stood up for herself amid an onslaught of bigoted questions from audience members, remains a must-watch for any queer teen unaware of how different mainstream visibility was just two decades ago.

Heche was also on that couch, invited by Winfrey to discuss her own experiences as a woman discovering her queerness, and standing defiantly amid prurient questions. Yet her presence in that time capsule has often been forgotten.  We can look back at that episode and sigh in relief over DeGeneres, knowing now that for all the hostility she faced then, she would still end up America’s queen of nice on daytime TV. Heche’s story isn’t quite as inspiring, partly because the negativity she faced, from Hollywood, the mainstream gay press and the tabloid media, hasn’t truly been remedied in the years since. Unlike DeGeneres, Heche didn’t get her grand comeback party.

Twenty years ago this week, Heche became the first, and embarrassingly last, LGBTQ actress to star in a big-budget studio rom-com. Six Days, Seven Nights cast her as a New York fashion journalist stranded on a desert island with a gruff pilot played by Harrison Ford, with whom she feuds, barters and ultimately falls in love. An expensive Disney screwball comedy, the film was set to propel Heche into the big leagues, following acclaimed supporting roles in films as diverse as Donnie Brasco, Wag the Dog, and Volcano. Heche was also in a relationship with the most famous lesbian in the world.

Despite warnings from her management that she would have the offer pulled if she and DeGeneres went public, Heche attended the Volcano premiere with her new girlfriend on her arm. Disney still made the offer, with Heche flying to Hawaii in late 1997 to shoot her role, but questions were raised about Heche’s apparent “believability” as a heterosexual character, while industry figures approached the situation with caution.

“There has not been a case in time where somebody has been this public about having a lesbian affair and asking us – and the public – to accept them as a female romantic lead,” an unnamed Hollywood agent told the New York Times. “It’s an important test case.”

It was also a test case that proved many weren’t ready. DeGeneres and Heche’s relationship was met with embarrassing levels of sleazy curiosity, with Larry King asking Heche if she “missed anything about the male” in an interview, and columnists complaining about the pair’s public displays of affection. That they held hands on the red carpet and touched each other appeared one step too far. “I think you’ll find that you can do whatever you want, just so long as you don’t force the rest of us to watch,” wrote Peter Bart in a particularly loathsome column for Variety. “There’s a difference between free expression and exhibitionism.” 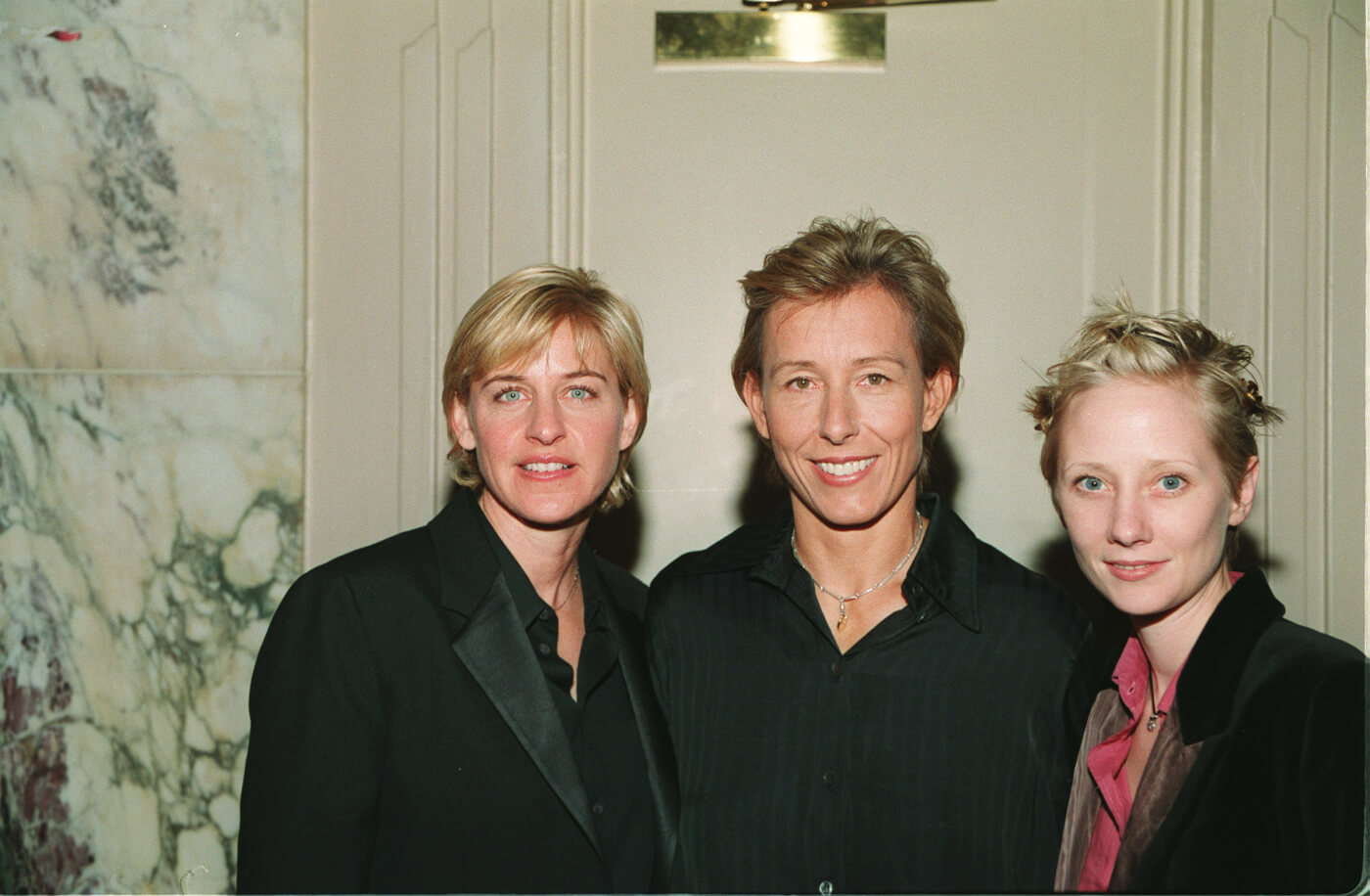 Speaking to Charlie Rose at the time, Heche expressed hope that Six Days, Seven Nights would be a watershed moment in gay visibility, but was also realistic about where the chips would fall if it bombed. “If the movie doesn’t do well, it may, unfortunately, be blamed on me for the reason that I am gay, and I think that might be the excuse that they use,” she said. “But I would hope that they would be able to see the bigger picture. The movie is the movie, and if it doesn’t do well then that’s the movie’s fault, that’s not really mine. I gave it my best shot.”

Six Days, Seven Nights didn’t bomb, but it did mark the end of Heche’s mainstream career. She wouldn’t film a lead role in another studio movie until Cedar Rapids in 2011. Six months after the release of Six Days, Heche returned to Charlie Rose and told him that she had noticed a slow down in her work offers since coming out.

“I’m a strong woman who is opinionated,” she said. “There aren’t too many people in Hollywood who are opinionated, period, let alone about homosexuality and saying, ‘I’m allowed to be who I am.’ How many actors do you see standing up for anything, who are really truly opinionated about any one subject, let alone a subject that’s so controversial?”

The backlash led DeGeneres and Heche to retreat from the world; the pair bought a house in Ojai and barricaded themselves from the media. In her 2001 memoir Call Me Crazy, Heche said that the breakdown of their relationship coincided with the most crippling stages of her mental illness.

The daughter of a fundamentalist Christian mother and a closeted Christian father who died of AIDS, Heche had spent the 1990s slowly unlocking her childhood memories through therapy, leading her to remember that her father had sexually abused her throughout her childhood. To deal with it, she disassociated into a second personality known as Celestia, who believed she was the reincarnation of God, with the duty to spread love. From age 25, she would experience isolated moments of madness and inhabit this second personality. The day after her breakup with DeGeneres, Heche wandered into the suburbs outside of Fresno, CA and claimed she was waiting for a spaceship to take her to heaven. Police arrived and hospitalized her.

Speaking to Barbara Walters in 2001, Heche said that she had recovered almost immediately and saw her life clearly for the first time. “I think everything I’ve done in all my insanity was to try to get my parents to love me,” she said. “My father loved movie stars. I decided I needed to become famous to get his love. My mother loved Jesus. That was her thing. So I wanted to become Jesus Christ… I did anything I could to get the shame out of my life.”

In her book, Heche wrote that it was love and honesty that first drew her to DeGeneres, the first woman she had experienced sexual feelings for. “Here was a person who was proud of herself and her sexuality,” Heche wrote. “A person who didn’t care what other people thought. A person who lived her truth and was telling it to the world… Somehow I equated her being out about her sexuality with absolute safety for myself.” 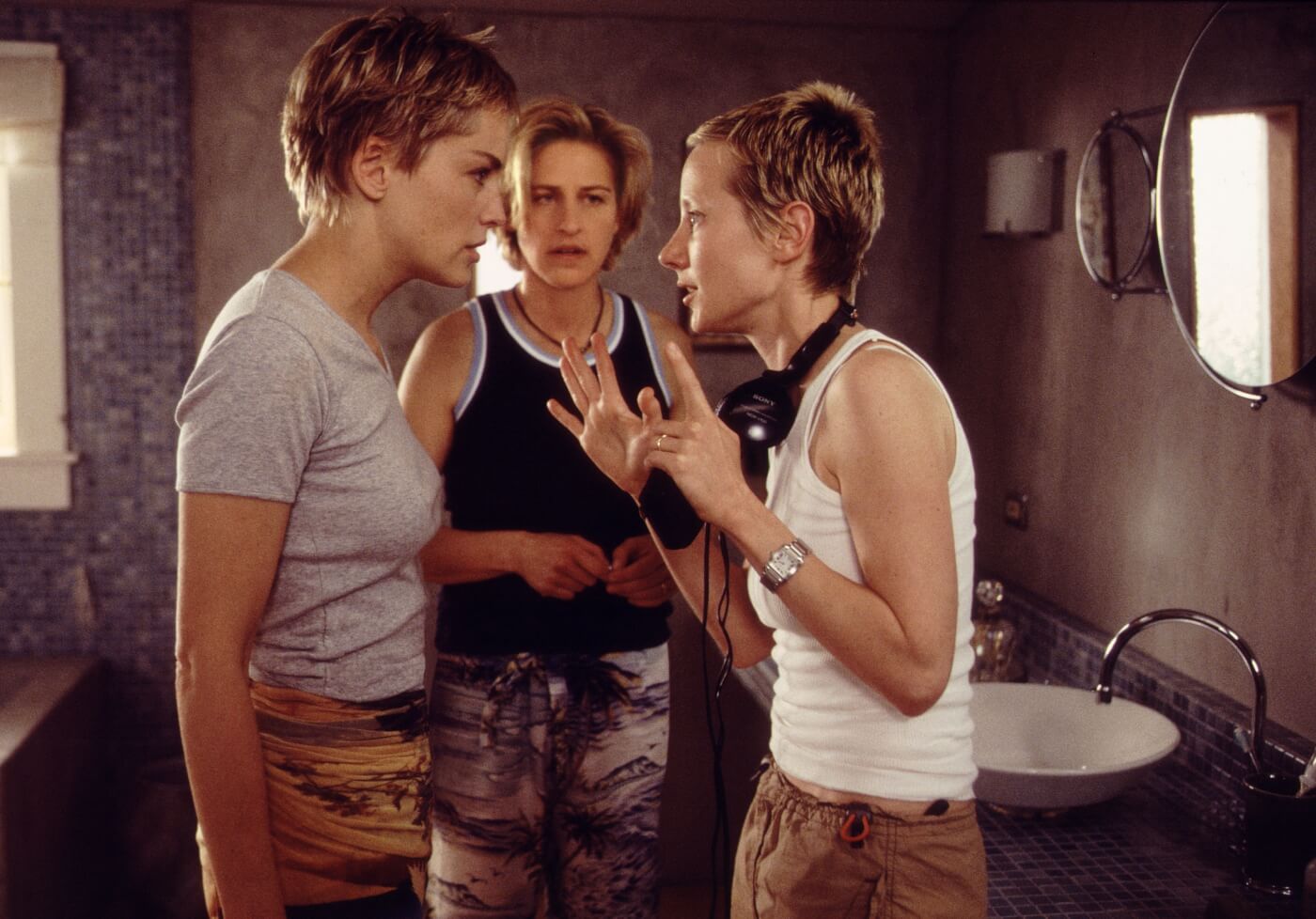 Heche also credited her epiphany to her then-boyfriend, a filmmaker named Coley Laffoon, with whom she married and had a child. Heche had never presented herself as anything but sexually fluid, but the news was still treated as an affront to gay progress and a betrayal of Heche’s previous public statements.

“I think we’re all different,” Heche said on Oprah’s couch four years prior, when asked if all queer people share the same journey. “Some of it [is acknowledged] from the beginning, some of us from just right now. If we can just be open enough in this world to accept everybody just the way they are for who they are, I think it’d be a much happier place to live.”

Audience members saw Heche’s comments as a contradiction of DeGeneres’ “I was born this way” stance, and even Winfrey admitted to being confused. Part of this was reflective of the era. Heche’s sexual fluidity, though we didn’t call it that then, became public knowledge at a time when queer cultural narratives were, somewhat by necessity, largely devoid of nuance. In the continued fight for the most basic levels of equality, labels had to be clear, public discourse unsubtle. But it also meant treating figures like Heche, those to exist outside of such rigid boxes, with almost cartoonish levels of disdain.

In a car crash of a profile for The Advocate in 2001, writer Anne Stockwell approached Heche with an unfair cynicism many today would find distasteful. During a particularly low point in the interview, Stockwell argues that Heche’s memoir, to some readers, implied that her father sexually abused her because he was gay (a subtext only there if you really wanted to see it). “No, no, no, I never say that,” Heche insisted in response. “I do not blame—in a million years—him being gay on why he molested me.” Later, Stockwell pokes at Heche’s recollections of her childhood abuse, asking “Do you have a definitive memory—from when it happened—of having sex with your father?”

That The Advocate went to such lengths to question Heche’s credibility, not only in terms of her sexuality but also her truth as a sexual abuse survivor, is particularly shameful, and reflective of an archaic form of gay media we’re all better off for having grown out of. In the following issue of The Advocate, the letters page features 10 reader reactions, seven of which refer to Heche in ugly terms, among them “fake lesbian” and “compulsive liar.” “Ellen is well rid of this crazy woman,” another reader declares. 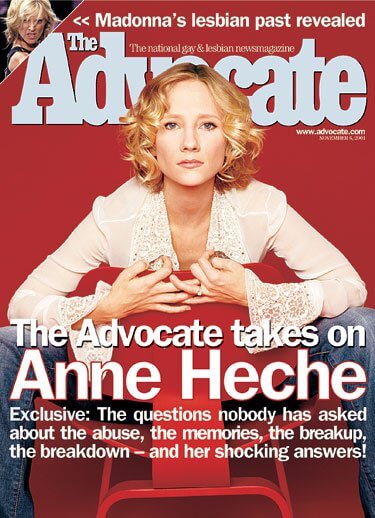 Despite such hostility, Heche has never expressed regret over her relationship with DeGeneres. Speaking to the New York Times in 2009, she said: “I got to participate in a loving truthful celebration of the way I thought the world should be. How could that destroy my career? I still can’t wrap my head around it… People wonder why I am so forthcoming with the truths that have happened in my life, and it’s because the lies that I have been surrounded with and the denial that I was raised in, for better or worse, bore a child of truth and love.”

She’s also received at least one apology. Last month legendary gossip columnist Michael Musto wrote an open letter to Heche expressing his regret at being part of a smear campaign that derailed her career in the wake of her split with DeGeneres. “Awareness of bisexuality has grown a lot and people better understand how it can lead to all sorts of couplings, which are not necessarily lies or betrayals,” he wrote. “I’m sorry I came down on you for falling for another man, and I’m still proud of you for the advances in celebrity visibility and appreciation that your relationship with Ellen helped encourage.”

Earlier this year, Heche joked on the Allegedly podcast that if she knew a reputation of kookiness would trail her throughout her career, she would have called her memoir Call Me Sane rather than Call Me Crazy. But doing so would have been a disservice to Heche’s importance as a pop culture figure. Enlightened, honest and endearingly weird, she exhibited all the openness and empathy we now often take for granted today, dismantling the preconceived notions of sexuality and mental illness in the process.

We’re better now. Anne Heche just got there 20 years before the rest of us.