Canada is synonymous for many different artistic exports, among them some of most well-recognized women in music: Celine Dion, Sarah McLachlan, Shania Twain, k.d. lang, Alanis Morissette, Feist. Add to that list Ria Mae. The out singer from Halifax, Nova Scotia has been writing and recording songs since she was a teenager, but it’s only been in the last seven years that she began playing music professionally. Her 2015 single “Clothes Off” from her self-titled album was nominated for a Juno (Single of the Year), facing off against Drake, Justin Bieber, Alessia Cara, and winner, The Weeknd.

Despite the loss, the nomination helped to solidify Mae’s success, and her new EP, My Love, released this November with Sony Canada, established that she’s got staying power. And despite some finding her an overnight sensation, Mae has been working hard to make sure she’s rising above the proliferation of pop stars and delivering sensual and inspired songs that paired perfectly with recent tourmates (and fellow Canadians) Tegan and Sara.

INTO spoke with Mae last week as she came off the road and played the iHeartRadio Jingle Ball in Toronto alongside Fergie, Cardi B, and Fifth Harmony, among others. She told us about her obsession with songwriting, lack of hobbies, and wildly diverse (and very queer)fanbase.

That’s a good question. I definitely feel in the last couple years I have been closer to feeling some sort of pride in my career and how far I’ve come. I’m someone that sets a lot of goals for myself and don’t really think about too much where I am and if I’m successful but I think I am just starting to get closer to what I want my success to look like and getting to a point where I feel content where I am when I look back.

INTO: Are there certain things that you haven’t gotten to do yet that you would love to do if you had the opportunity?

I really love writing. Writing songs is my favorite aspect of the whole gig and playing live is a close second, but writing is really what I love to do. So I think I’m excited down the roadmaybe not anytime soon, but down the roadto write for other artists and write American pop, or the world of pop music that I’ve always been obsessed with.

INTO: How do you describe your fanbase?

It’s funnyI spoke with someone a few days ago and they had mentioned that they came to one of my shows and they were really surprised at how diverse the age range was, and how it was like a bunch of 50-year-old men and then young teenagers in the front row and then a lot of the queer community.

I think because I am lucky enough to be on the radio in Canadaa pretty heavy rotation in Canadathat there are all-ages. Maybe women in their 30s that don’t necessarily identify as queerthese people will come out to the shows knowing all the words to at least the bigger songs. Then I also have this base of the queer community, which is how I started off. I used to play the 15-20 people in these tiny little cafes and bars and that base has always been growing really slowly and consistently.

So, I just have a funny mix which I love because I feel like I moved a lot as a kid and I switched schools a lot and I always sort of fit in to a bunch of different groups, so it kind of makes sense that my audience would be so silly. 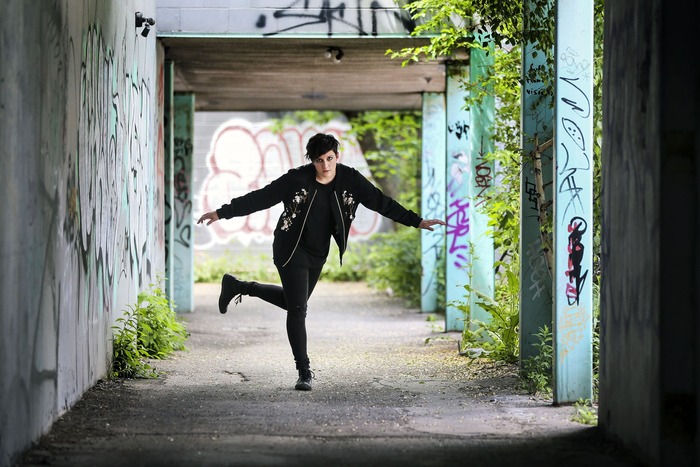 INTO: How has your experience been in being out, and not trying to alienate non-LGBTQ people, but to still be welcoming and wanting to make sure that queer people feel accepted, just not in an exclusive way?

Yeah, that’s always been a thing. It’s funny, because I definitely felt it in my gut as a performer that I didn’t want to be over-the-top gay to alienate people. I don’t know where you live, but I come from the Maritimes in Canada and it’s a little bit behind the rest of Canadayou know, small town people, a little more conservative, and I was growing this fan base at first and I didn’t want to alienate.

But also, I wanted to stay true to my character. I am not very over-the-top at all, and kind of shy and awkward and I don’t really give too much of my personal info even to my closest friends, so there was definitely that dance. Then trying to make sure you are not erasing your queerness for your audience is an important part of representing other people as being yourself, it was definitely a dance.

But I think as growing as a person and then in the last five years have been so amazing with the representation to the media that somehow, now, I don’t really think about it anymore, and that’s a very cool but privileged place to be in.

INTO: I’ve talked with Tegan and Sara before about how they’ve found radio to be a very sexist and homophobic atmosphere at timeshave you had that sort of experience?

I haven’t. The thing with Tegan and Sara is they are a few years older and they started like 10 years before I did. And they also started on alternative radio which if you looked at their charts right now you might see one or two women, so that is very sexist and then look at 10-15 years ago when they started to do radio promo, to be openly gay was just not a thing yet.

I’m lucky because I am on pop radio so you have Sam Smith and Lady Gaga and people that kind of push the gender boundaries, and it was 2016 the first time I did a radio promo. So I am lucky I haven’t really encountered any negativity that I have seen. I don’t go looking for it eitherlike I would rather die than read my YouTube comments, so I kind of shelter myself from it because I am a sensitive person. But I have never felt a sense of negative anything with my radio promo. But I definitely can see if I was in alternative radio, especially six years ago, even, that it would be a problem.

INTO: How do you think people outside of Canada find or experience your music differently?

People who tend to listen to my music outside of Canadait tends to be a lot more underground queer people passing it around or telling friend by friend, like a slower growth. And I think those people who know all of the songs off the albumit’s kind of a stronger fan base in that way, even though it might be smaller.

It’s been interesting for me, because sometimes I will have people that look like me queer women that are sort of boyishand that’s kind of who I write for in my heart because I am writing for people that maybe would look to me and think, Oh, I’m like that and this person is thriving.

It’s been really interesting. Sometimes I will get a straight woman who is the mother of four who is relating to that, and who will say “I want to talk to my husband like that.” And I love that. I love other people’s experiences and as a writer I love getting into other people’s heads that way and I think that tells me a lot more about other people that I am constantly learning from. When a song connects with someone it’s because they are reaching for that or they want to be that and with they could feel that more and they are addicted to the feeling it gives them so it tells you a lot about someone.

INTO: Some artists will write a song about a very personal experience but then it goes into the world and people decide what it means for them, and have completely different interpretations. Is that something you enjoy seeing people do with your music?

I tend to write that way. Most of my songs are about really personal things but I always kind of zoom out near the end, making sure I’m not talking about my girlfriend or my coffee cup. I want everyone to be able to relate to it, and I like when people take different meanings.

There have been timesthere’s a new song I have on my EP called “I’m On Fire,” and I wrote it for myself but the details of it aren’t about me even though in both versus it sounds auto-biographical. But it’s not, and I had to be very careful with my words because I was talking about my hometown and I didn’t want people to think that it was exactly about me. I am getting used to that more, that people will make up what they think the song is about and I just have to be okay with that.

INTO: Are there misconceptions about you? Like have you read a review that you felt was wrong or they didn’t get it?

I see all the time people post “Ria Mae’s debut single” when I have been releasing music since 2009, but it is what it is. I don’t knowit’s so hard to see how people see me. On social mediaI’ve always kind of looked this way, I’ve always been this gender, I’ve always been the same. On my last album I put a picture of me as a kid because it’s just like, I’ve always been this way. It’s funny because some people are like “Oh, you are so coolyou are trying to be this thing,” but I’m like no, I’ve literally always been like this. 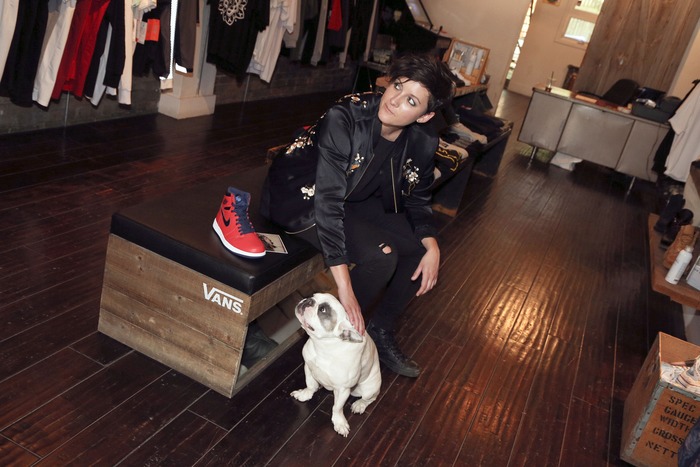 INTO: I’m sure you also have a lot of younger queeror not even queer but androgynous women who tell you how important that is for them, to have a role model in you.

Yeah, that’s the thing. I think a lot of people will see someone like really famous right now like Ruby Rose or Halsey or other people with short hair and right away see my picture and think “Oh, she’s going to be overtly sexual or really over the top.” But that’s why it is important to have as many voices in the public as possible, because maybe a little gay girl will look and be like “My choices are to look like Ruby Rose or look to men.”

INTO: What do you do you do when you’re not working?

I don’t even have any hobbies anymoreI just love writing so much. My girlfriend and I did this thingshe thought she knew more about me than I knew about her, but I killed it. She didn’t know anything about me, and one of the questions was like your partner’s hobbies and she couldn’t think of any. I just write songs, drink coffee, and tour. It’s good for my career, but I don’t know if it’s good for being a well-rounded individual.