So far, I’ve been earnestly, if cautiously, excited about Rise. There’s been a ton going for it, including its strong cast of teen performers, a realism that shows like Glee and Smash lacked, and a good source material score in Spring Awakening.

What I have been remiss in mentioning, very purposefully, is the plot dragging everything else about the series down: the football story. Yes, showrunner Jason Katims, veteran of Friday Night Lights, chose to inject Rise with as much football story as musical. The problem is that, whereas the musical story is dynamic and interesting, with a lot of different characters to care about and elements to play with, the football story all comes down to Robbie Thorne (Damon J. Gillespie). And as sweet and well-intended a character as Robbie is, he’s not nearly strong enough to sustain what is essentially the plot of half the show. 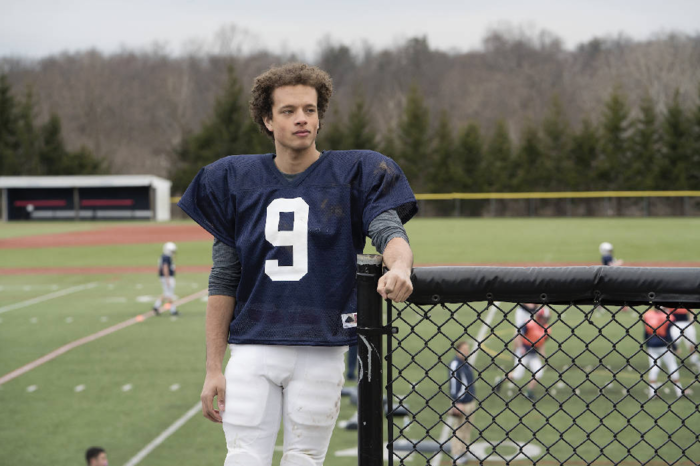 The football plot is as simple as you’d imagine: Theatre director Lou (Josh Radnor) wants starting quarterback Robbie as the lead in Spring Awakening. Coach Strickland (Joe Tippett) is against that idea, as he wants Robbie’s head in the game. The two adult men have a tug-of-war over the boy’s heart and soul. You’ve seen this same plot on Glee with Finn (the late Cory Monteith). It’s not new, fresh, interesting, or worth our time.

Unfortunately, the fourth episode of Rise decides that it is, in fact, worth our time, as well as nearly every other teen character’s time. Robbie throws what’s supposed to be a victory party at his house except thanks to him, his team loses a crucial game. The party is instead somber, and only gets worse when the theatre kids show up uninvited.

Assumedly, the hope here was to show the tension in Robbie’s life writ-large. Telling his would-be girlfriend Lillette (Auliʻi Cravalho) leads to an invasion of theatre kids, who chafe up against his teammates. The problem is that we don’t know half of the guests; the football players are uniform and uninteresting, because they haven’t been otherwise introduced. (The one exception is Lou’s benchwarmer son, Casey Johnson’s Gordy, who is trapped in an alcoholism plot I’d just rather ignore.)

Because we only know one side, we’re naturally drawn to them, especially after two football players misgender and mock trans theatre student Michael (Ellie Desautels). Sure, the theatre kids weren’t technically invited, and thus you could argue their presence is irritating. (They do sing at one point, and it is incredibly representative of how annoying a party full of performers can be.) But we’re never going to take the side of faceless bullies, and that’s all the football team is to us right now. 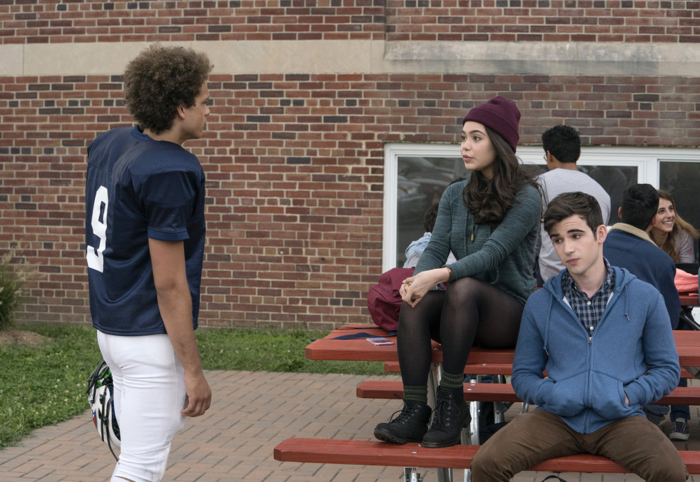 But as lame as the rest of the football plot is, there’s really nothing as gross to watch as Lillette’s interaction with Robbie’s father. He senses that Lillette, as she stands in for the whole of the theatre department, could be distracting Robbie. So he decides to get involved, going so far as to tell Lillette that she’s a distraction.

I’m sure this kind of conversation happens more than I’d like to admit. I went to school in Texas; I know how intense parents can be about football. But boy, is it horrifying to watch happen. It puts an undue amount of stress on Lillette, and basically throws a big ol’ Conflict Ball into their relationship. I personally don’t care a ton about this romance, largely because teen relationships are transient and I’m sure, if Rise has a life beyond this season, they’ll date plenty of other people. But it’s absolutely an absurd act of parenting, one that makes it incredibly easy to sympathize with Robbie.

That’s all Robbie has right now, though: our sympathy. He’s a solid singer and actor, and a nice guy, but he’s nowhere near as dynamic as Lillette, or Michael, or Simon (Ted Sutheland), or Gwen (Amy Forsyth). If Rise wants to continue to make him the de facto lead, he’s gotta step up to the plate, and give us not just someone to feel bad for, but someone to root for.