R+J, Hypokrit Theatre Company’s all-genderqueer/female reimagining of Romeo and Juliet (co-produced by Access Theater), is a fascinating and well-acted take on “The future is female,” taken to its absurd extreme, that proposes that the mechanisms of patriarchal oppression would persist in a future entirely without men. While at times its relationships could use more directorial clarity, the production’s food for thought and unapologetically queer aesthetic are refreshing and timely.

Our introduction to this futuristic Verona comes by way of a “museum” situated on the way into the playing space, in which known feminist artifacts (a Guerrilla Girls poster, a pussy hat, etc.) are contextualized in relation to the “Great Revolution,” an apparently feminist revolution prior to the action of the play. The placard for Peter Paul Rubens’ The Rape of the Daughters of Leucippus explains that, in this world, this work of art, of which it is the only remaining copy, has been destroyed by the state for its romanticization of sexual violence. The graffiti on the sheet-metal walls of the playing space suggest this is the near-future with #resistance-like slogans.

When the characters appear, we sense that this is a post-apocalyptic world: their street clothes are from the Army & Navy store with punk patches, and sometimes they wear gas masks. 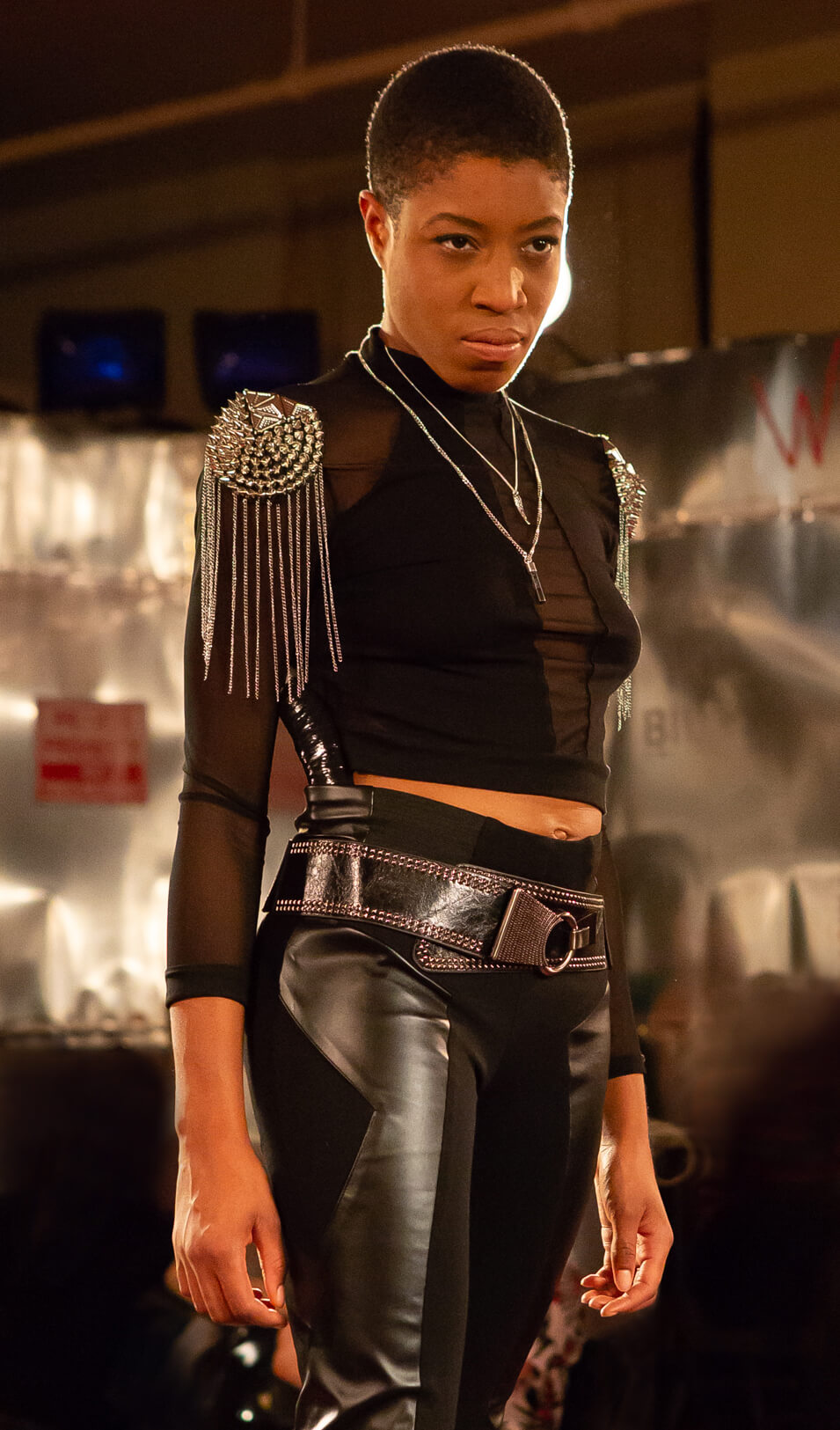 In fact, gas masks might be the most obvious indicator of status in Lux Haac’s gorgeous array of costumes, which suggests a world in which people enjoy more or less egalitarian relationships, despite their titles. For instance, the Nurse (possibly the lowest-status character in either of the two houses) wears a cocktail dress and heels, and Romeo seems to be the only person in the world of the play who can exist outside the city limits without something to shield their face. Could it be that their immunity to environmental toxins is what gave them status among the Montagues to begin with?

The production loses its way in moments when its double- (and triple-, and quadruple-) casting of its six actors, together with its gender-inclusive language and class-neutral costumes, gang up on those of us who haven’t spent time with Romeo and Juliet recently. 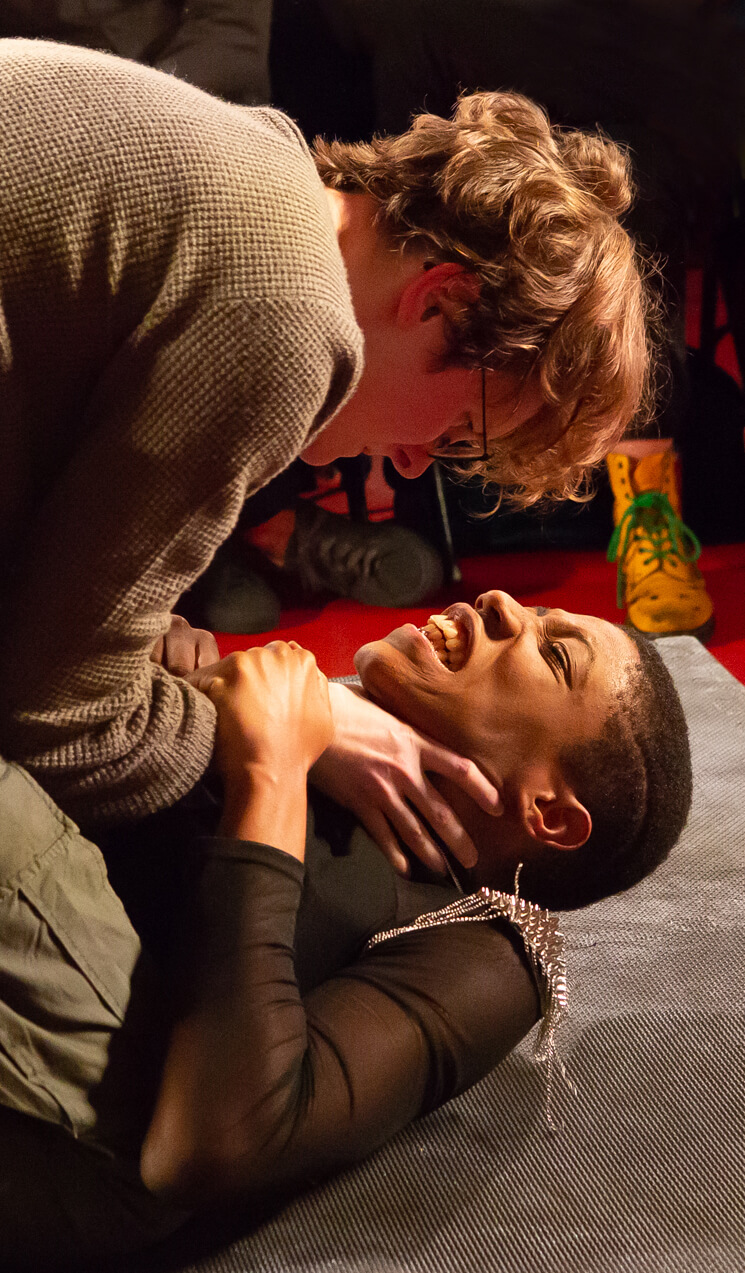 In particular, the decision to cast Tsebiyah Mishael as both Lady Capulet (whose partner, Capulet, is also female) and Friar Laurence (referred to, in this production, as “Mother” instead of “Father”) creates a situation in which it’s unclear whose mother belongs to whom — as for myself, I was well past the intermission before I realized Friar Laurence wasn’t Lady Capulet in a different outfit. Likewise, Jillian Geurts, whose Nurse wears rope braids and whose Sovereign and Lady Montague do not, is at times difficult to identify.

That said, the entire cast performs and elucidates the text beautifully, which activates and enlivens the script in a way that feels both faithful and contemporary. Ania Upstill’s tragicomic Mercutio, whose “Queen Mab” monologue was as haunting as the rest of their performance was mercurial, was especially fun to watch. 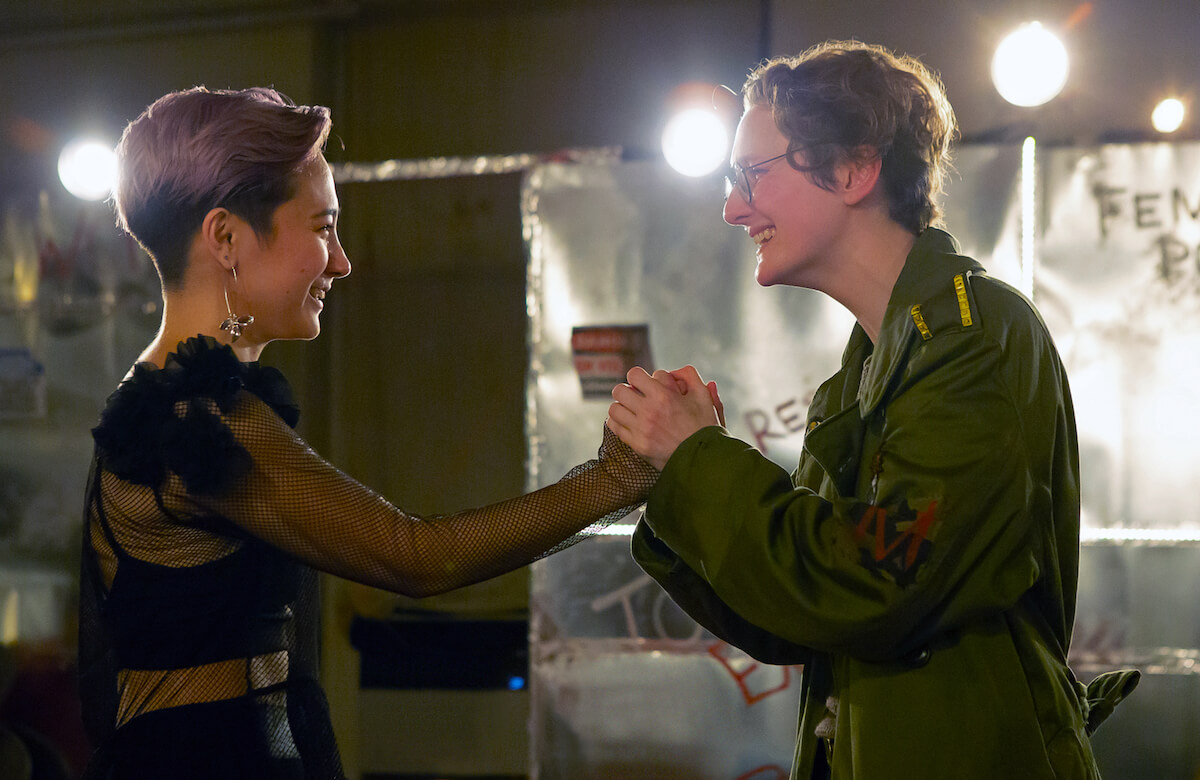 Its gender-inclusive language creates some lovely moments, like when Tybalt’s “Boy, this shall not excuse the injuries that thou hast done me,” addressed to the genderqueer Romeo, compounds the insult embedded in the text with a misgendering. It also focuses the text on its obsession with nomenclature (e.g., “Romeo, Romeo, wherefore art thou Romeo?”) and the arbitrariness of its central conflict: Never before has the vendetta between the Montagues and the Capulets seemed so petty as in a post-apocalyptic, non-reproductive society in which kinship is based on affinity rather than heredity.

Mary Houlahan’s R+J would seem to indicate that relationships between human beings are star-crossed whenever their motivations originate in binary gender discourse. In other words, the work ahead of us requires a feminism that goes beyond Men are from Mars, Women are from Venus, beyond Hanna Rosin’s The End of Men (which, incidentally, serves as a prop in this production), a feminism that takes bell hooks’ “Patriarchy has no gender” into account.

At a time when burning the cis male establishment to the ground seems like a really great idea, R+J challenges us, artfully and inventively, to adopt a more critical perspective.