Award-winning Rebecca Hall is Rob Roth‘s co-star in Soundstage, but she only appears on screen.

The show, currently running at HERE Arts Center in New York, is a striking visual catalogue of beautiful classic film and mixed-media live performance effects, exploring melancholia, nostalgia, and decrepitude through what seems to be a drug-fueled magic ritual. Created and directed by Roth, who wrote the show with Jason Napoli Brooks, and featuring the work of a host of composers, directors of photography, musicians, and Butoh dancers (choreographed by Vangeline), the effort — while gorgeous, contrapuntal, and virtuosic in the realization of its gestures — may not amount to more than the sum of its parts.

Roth’s haunting, hour-long piece pulls from Kenneth Anger, Michelangelo Antonioni, David Lynch, Billy Wilder, Darren Aronofsky, and Tony Oursler, to construct a deeply beautiful hellscape that is vast in its claustrophobia. Its Butoh dancers perform stage magic and operate the dolly-mounted camera even as they serve as black holes in the shape of faceless human beings. The piece’s cavernous sense of space is owed to its eclectic, environmental, electronic score — by Yair Evnine, Rachelle Garniez, and Kamala Sankaram, with lyrics by Roth — supplemented beautifully by voice and a trio of cellists who are unseen through the duration of the evening. 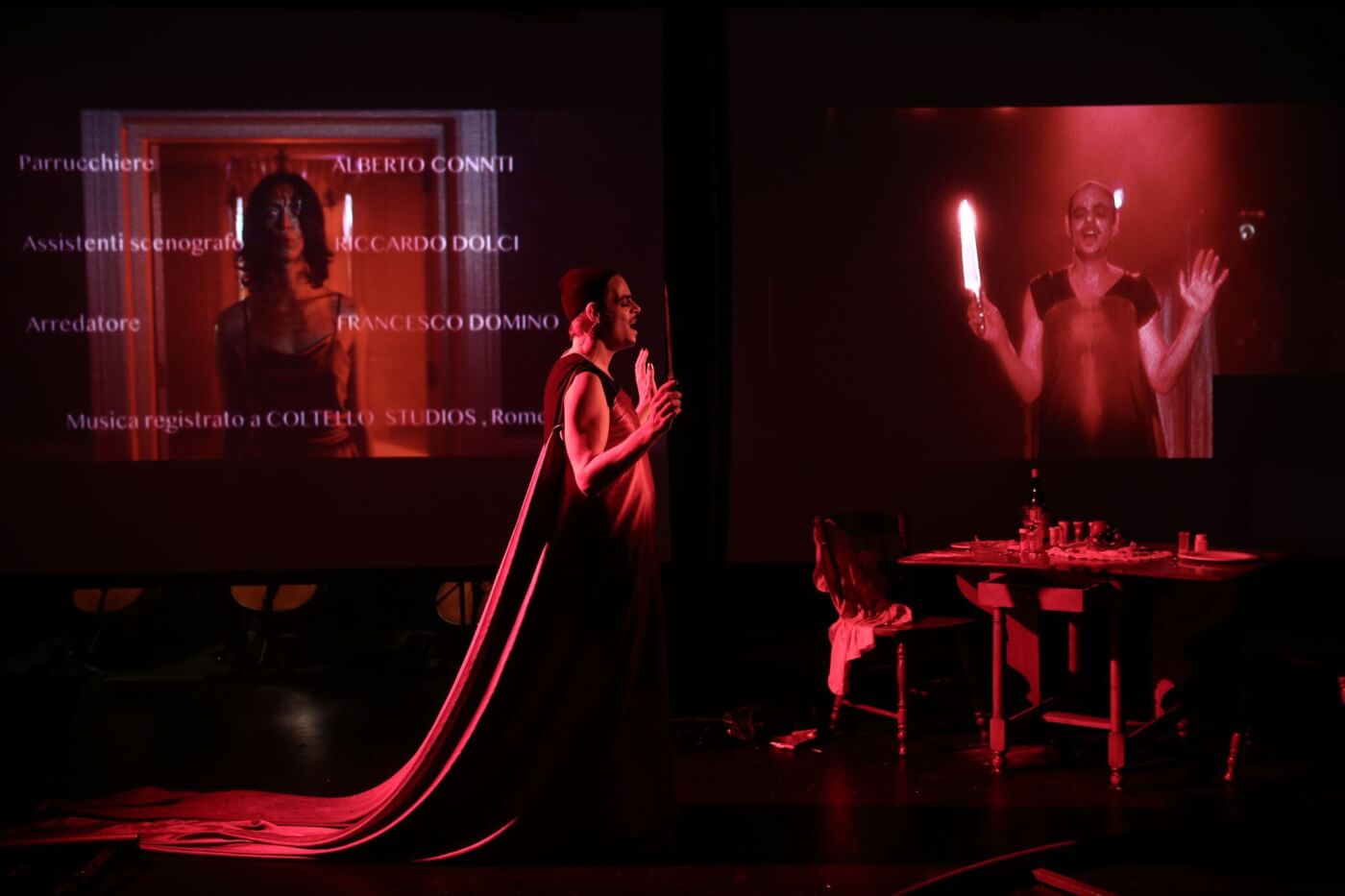 Rebecca Hall’s “On-Screen Muse” character begins as a projected face on Roth’s vanity wig head (à la David Bowie’s “Where Are We Now?” video), but we see her variously on his vintage television and one of the screens far upstage — sometimes in her own scene, other times in conversation with Roth’s “Man” — as the Man dreams his way through her long and storied career in a cocaine-crash haze. Hall and Roth deal together with the anxieties, disappointments, and exigencies of the roles they’re forced to play.

Or perhaps the two meditate on their crossed frustrations of embodiment: she is condemned to be gorgeous, feminine, neurotic, a ghost engraved in celluloid, a phantasmal performance on VHS that wears out as it is played over and over again; he is constrained to a body that ages, that can’t be rewound, inscribed with the features and expectations of masculinity, whose only reprieve from the imperious linearity of time is the heretical liturgies of mimesis and repetition.

And when the applause effect at the end of the piece devolves into the heavy rainstorm effect that begins the night, and Roth assumes again the cross-legged, dejected crouch, gazing into the static snow of the television, gesticulating with his sparkly long nails at the electric, noisy void, we understand that his dance with his demon is expected to go on ad infinitum. 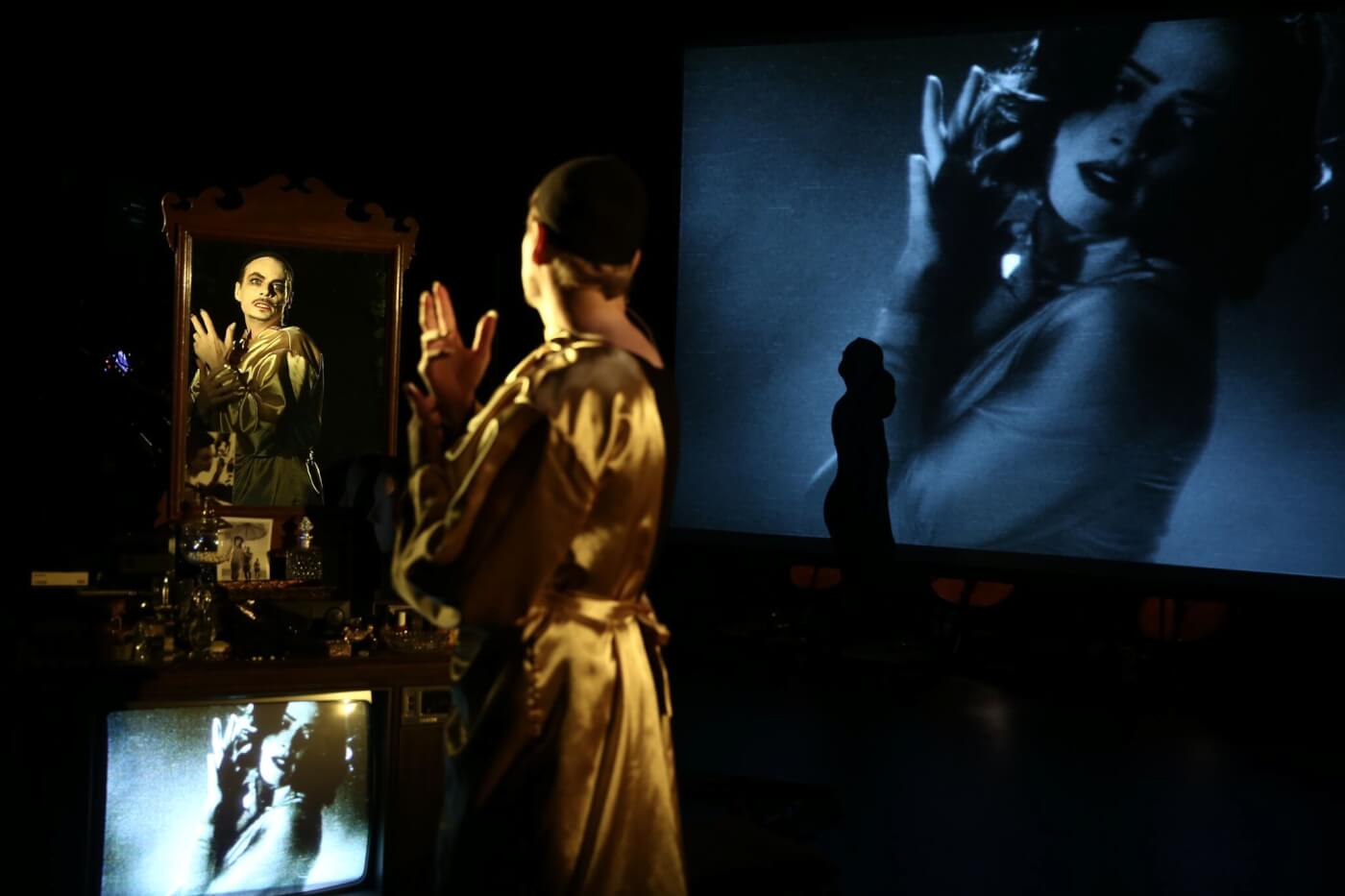 For all its art film gestures, beautiful imagery, and expert manipulation of time and space, Soundstage seems mired in its influences. Or maybe it intends to force a reckoning with time itself by resurrecting an aesthetic we might otherwise consider lost to the ‘60s and ‘70s.

Either way, Roth’s encounter with the archetypal tragic, proto-psycho-biddy film star, and her companion, the archetypal hopelessly adoring queer man, eschews the camp usually associated with that endlessly star-crossed relationship and instead goes full Satan with its full complement of impenetrable signs and symbols, searingly void emotional landscapes, and trance-like temporality. (The piece itself is structured around four colors associated with alchemy, obvious only to those who read the program.) If you weren’t into Eraserhead or Lucifer Rising, Soundstage probably isn’t for you.

Which isn’t to say that it is without its pleasures for those who are into that kind of thing. Its spectral take on queerness and femininity paints an arresting, (ironically) more realistic portrait of those in thrall to loneliness, alienation, and despair than gay-culture tropes allow; and it’s not every day that we get to consider these stereotypes in such capable hands. Even those pleasures may remain aesthetic and intellectual, however, and the piece teeters on the edge of becoming an arty “Ghost of Christmas Future” story without a perspective on how its entangled characters might free themselves or each other.

How far does Soundscape toe the line? That’s for you to decide.

Soundstage plays at HERE Arts Center through Saturday, September 29. Tickets range in price from $15-$45. See here.org for more information and to buy tickets.