As the Roseanne reboot scores huge ratings (and a second season renewal), an old photo shoot has resurfaced in which its star dressed up like Hitler. Roseanne Barr posed for the satirical Jewish magazine Heeb in 2009 in a controversial spread where she shoves gingerbread cookies shaped like Jews into an oven.

After critics called for Barr to be fired over the photoshoot, the reboot’s showrunner Bruce Helford claimed they should pay attention to the show, not the comedienne’s conservative politics.

“People should just watch the show and judge it on its merits,” he told Entertainment Weekly on Wednesday.

But those calling for Barr’s head on a silver platter should remember she hasn’t just offended the Jewish community in the past (despite growing up in a Jewish household). In a series of 2012 tweets, TransAdvocate reports she posted a transphobic rant about Colleen Francis, a transgender woman who was discriminated against while using the female locker room at Evergreen State College.

“If she has a penis, she’s not allowed in,” she said in a series of tweets (which have been edited for clarity). “I’m sorry, but a dick means you’re a man to me. Maybe I’m old and out of it, but I can’t go there, sorry.”

“Women do not want your penises forced in their faces or in our private bathrooms,” Barr added. “Respect that fact.” 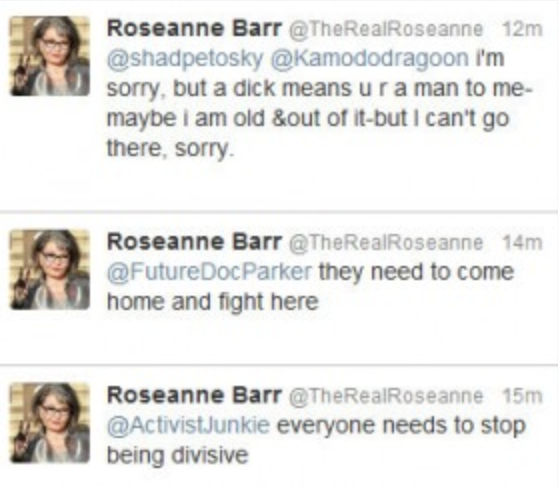 Marti Abernathy, author of the TransAdvocate post calling attention to Barr’s transphobic statements, says that the remarks surprised her. Because Roseanne was viewed as a trailblazer for LGBTQ representation during its original runairing primetime’s first gay wedding and one of its first lesbian kissesshe assumed its star would be trans friendly.

That was not the case, she says.

After the article went live, Barr blocked TransAdvocate on Twitter. Abernathy claims Barr “continues to post anti-trans tweets every so often,” including tweeting a meme spreading the myth that trans people target women and children in public bathrooms.

“There’s absolutely no support for that at all in the statisticsperiod,” Abernathy says in a phone conversation.

She’s right. More than 200 municipalities in the United States have laws on the books allowing trans people to use restroom facilities which correspond with their lived gender identity, and none has experienced a surge in sexual assaults as a result.

Abernathy claims Barr might be “uncomfortable” sharing a bathroom with trans women, but her comfort isn’t more important than the safety of transgender people. Research from UCLA’s The Williams Institute shows that 70 percent of trans or gender nonconforming people have been harassed or attacked in a restroom facility.

“If I’m visibly trans and I go into a public bathroom‚ I could be assaulted,” she says. “Early on in my transition, I was sexually assaulted in a men’s bathroom because I was afraid to use the women’s room. It’s not hypothetical for me. It’s happened.”

But trans writer and director Shadi Petoskywho was tagged in Barr’s 2012 tweetstormsays the comedienne’s views are difficult to pin down.

Although Barr supported Donald Trump in the 2016 election (and her character, Roseanne Conner, is a Trump supporter in the reboot), she ran as a candidate for the Peace & Freedom Party in the 2012 presidential race. Barr’s platform included the legalization of marijuana, but Trump’s Attorney General, Jeff Sessions, has attempted to recriminalize weed in states which have already legalized it.

“You don’t know what to expect with Roseanne,” Petosky tells INTO over the phone. “Sometimes she can be incredibly contrarian, but you’re not going to get a consistent message.”

According to Petosky, that includes Barr’s views on trans rights. The two briefly worked on a project together, and Petosky describes the comic as friendly and affirming during the collaboration process. But she’s seen Barr “take all sides over the course of knowing her,” Petosky says.

Petosky says that part of the issue is due to the fact that Barr has dissociative identity order. Her opinions shift as her personality states fluctuate.

“It really depends upon the day or the week or the context with Roseanne,” Petosky claims. “Sometimes she feels very close to the trans issue and seems to be wildly LGBTQ. Sometimes she seems to be more of the trans-exclusionary radical feminist viewpoint.”

That dichotomy is apparent in Barr’s work.

Although the Roseanne reboot has been applauded for sensitively handling the inclusion of a gender nonconforming character (Darlene’s son, Mark), Barr also mocked trans women in her 2011 book, Roseannearchy: Dispatches from the Nut Farm. In one passage, she describes infighting in the LGBTQ community between transgender people and butch lesbians.

“You haven’t lived until you have seen a huge guy with boobs talking about female hormones and deciding to keep his penis, and how that was a feminist issue,” Barr wrote.

Abernathy’s major concern is whether the show will continue to treat Mark (played by Ames McNamara) with dignity. In the rebooted series second episode, Dan Conner (John Goodman) learns to respect his grandson’s choice to wear a skirt to school, even if he might not understand it. She worries the storyline could “take an anti-trans tone” in future episodes.

One encouraging sign is that there will be queer people in the room to ensure Roseanne doesn’t fall prey to Barr’s worst instincts. Darlene is played by out actress Sara Gilbert, while lesbian comedienne Wanda Sykes is a writer on the show.

Petosky says she’s liked the show thus far, calling it “fun” and “nostalgic.” But whether the views of its staff translate into trans affirmation is an open question.

“It’s a wait-and-see with her,” she claims. “You never know what you’re going to get.”