After eight competitive episodes of RuPaul’s Drag Race All Stars season two, and one episode of season three, finally, finally, fi-na-lly someone gets how to take advantage of the Lip Sync for Your Legacy format. It took Shangela Laquifa Wadley herself, queen of strategy in season three of the flagship show, to step up to the plate and start asking what the other queens will do for her if she saves them. Yes, at last, a contestant is looking at the eliminate-each-other format as a chance to build alliances, not as a burden. Now, hopefully, her fellow queens will follow suit.

Things look dismal when the episode opens, as BenDeLaCreme practically complains about sweeping the premiere’s challenges. “This sucks,” she says as she wipes away eliminated queen Morgan McMichaels’ lipstick mirror message. “It’s like not winning. It feels really bad.” Despite the $10,000 prize for winning the Lip Sync for Your Legacy, and an early positive impression in the judges’ minds, Ben’s too wrapped up in having to make a tough decision and sending home one of her sisters.

Thorgy Thor, who I agreed with maybe once in season eight, speaks sense in her confessional: “Wake up, bitch! You had to make a decision. Nobody envied you, but you made it. Move forward.” Because that’s the game. All Stars is not Drag Race. The difference in the format exists for a reason. The best of the best should be capable of making hard choices to get ahead. Ben is great at Drag Race, but as evidenced by her mealy-mouthed monologue when she had to eliminate Morgan, she may not be great at certain elements of All Stars.

Meanwhile, Shangela is taking all those elements and running with them. She declares herself “the Daenerys Targaryen of drag” right out of the gate in this episode. She rules the challenge, a lip-syncing extravaganza a la season two’s Herstory of the World number, except this time it’s a drag recreation of VH1 Divas Live. Shangela takes her Mariah Carey impression over the top in all the best ways. When she makes the top two (along with Ben for the second week in a row), she immediately uses her power to forge alliances with both members of the bottom two.

Shangela is here to play the game. That will take her a lot farther than Ben’s reticence to get her hands dirty will. Because as Morgan herself noted post-elimination, this cast is out for blood.

The strategy on display, along with a contestant meltdown (more on that in a minute), make this episode a fascinating installment. It’s a good thing, too, because the actual challenge is kind of underwhelming. The queens mention how much more complex the Divas Live choreography is than Herstory of the World’s, but the actual performances are nowhere near as funny. The big problem is that the queens are just lip-syncing RuPaul songs in the style of their chosen artist there are no original lyrics here, save a few transitional lines and a final ditty (that is set to the exact same tune as Drag Race season nine’s “Kardashian: The Musical”).

Why the shift from original lyrics to a dance focus? It could be that Todrick Hall is now in charge, after the unfortunate public meltdown of former favorite Ru producer Lucian Piane. But that seems wrong, considering Hall is a prolific parodist, and his “Kardashian” was an original piece. Whatever the case, it gives queens relatively few chances to be funny or impressive save Shangela, whose Mariah number is minimally about singing and more about camping it up, and Ben, whose hard-rapping Julie Andrews is perfect. Even a cold-hearted Ben skeptic like me can admit she utterly slays this challenge. Under Drag Race rules, she’d have been the sole winner (though, under the same rules, I think Aja would’ve been the champion last week).

Joining them in the top is 10th queen Bebe Zahara Benet as Diana Ross. She effortlessly proves why less is more: She has few lyrics to lip-sync to, but every movement, every facial twitch, and every affect is right. “Here’s the key that everybody should look at for that: You didn’t do much to embody Diana,” head judge Michelle Visage says. Subtlety won out for her. Still, it’d be tough to argue for her win, considering how little she does compared to Shangela and Ben.

Taking into account both the challenge and the redeem-a-bad-look runway, some of the other results are puzzling. Trixie Mattel is safe after a terrific Dolly Parton impression, I’d imagine because it’s too expected for her (though personally, I’d have put her in the top three over Bebe). Aja joins her; her Amy Winehouse is tame, but a spectacular reworking of her Princess Disastah runway keeps her in. Chi Chi DeVayne falls just outside the bottom two, even though her Patti LaBelle is a laugh riot. The problem seemingly lies with her reworked neon look, which judge Carson Kressley knocks as “basic.” Her dancing diva sister Kennedy Davenport is not as lucky, as a poorly executed Janet Jackson impression lands her in the bottom two. 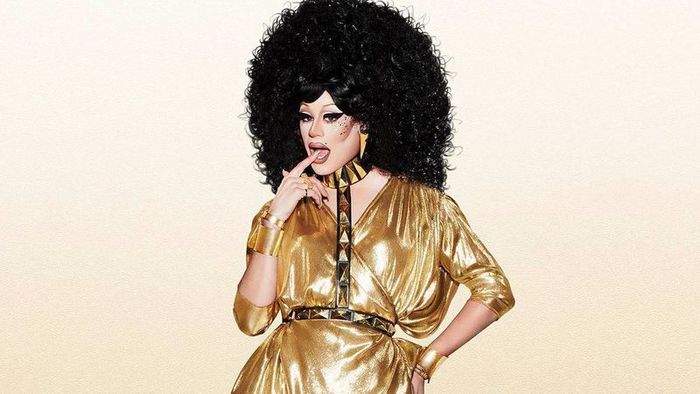 Then there’s Thorgy, bless her heart. Thorgy was a fantastic competitor on Drag Race season eight, continually scoring high in the challenges, until her lack of wins and imagined rivalry with eventual champion Bob the Drag Queen got the best of her. When she started overthinking things, she sunk into a pile of self-doubt, and never fully recovered.

All Stars brings out all the worst parts of Thorgy. She’s a mess from the word go this week, questioning why her part as Stevie Nicks isn’t as funny as the others. (Having seen the full show: Girl, save Mariah and Julie, none of them were that funny.) In rehearsals with Todrick, she imagines herself focused and galvanized, but as Ben later points out in a confessional, she spends the whole time subconsciously self-sabotaging. It’s honestly distressing to watch a talent like Thorgy melt down like this. As a result, her actual performance is kind of a mess. She looks like Stevie, but her affects are twitchy and bizarre. Her insistence during judging that Stevie Nicks isn’t a gay icon really, girl? doesn’t help her case.

Said meltdown is ultimately her undoing, as Lip Sync for Your Legacy winner Shangela’s reticence to send home her Texas sister Kennedy trumps Thorgy’s offer of an alliance. Shangela is playing strategically, and she sees Thorgy’s weaknesses for what they are. An ally is only good to her if they’ll actually perform well. So the season eight queen goes home or rather, to wherever Morgan is as they await a potential chance to Ruturn to the competition. If Thorgy wants to get back in, though, she’ll have to get through a lot of personal demons, and fast. 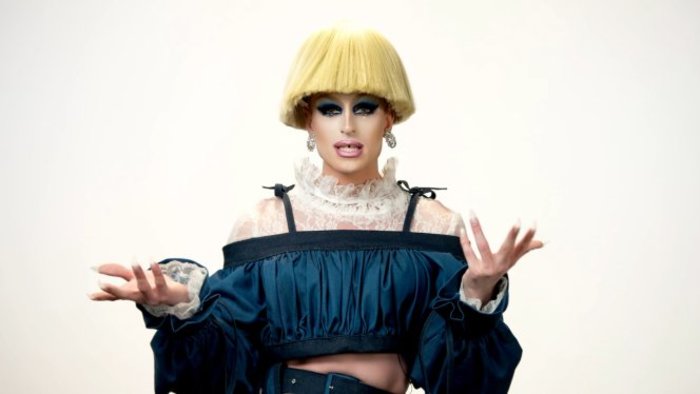 I’ve saved Milk for last, even though she’s just safe this week, because there’s a lot to say about the lactose queen. During the premiere, while Trixie, Kennedy, and Bebe seemed happy to be called safe, Milk looked annoyed. This week, she doubles down, whispering angrily to fellow safe queens Trixie and Aja at the back of the stage after her performance as Celine Dion registers as neither spectacular nor disappointing with the judges.

“This is fucking ridiculous,” she says. “I hate this.” She’s mad not being in the top three, Trixie asks to clarify. “Yes,” Milk insists. “Those three? Really? Fucking stupid.” It’s unclear if any of the other queens hear her, but the Drag Race editors throw on subtitles to make sure the audience catches every word.

There’s clearly a narrative being built here of Milk as villain. But last week, I thought this was mostly playful that Milk was in on the joke as she shaded the other queens in confessionals. Even this week’s sad humblebrag about doing her Celine impression for the Canadian singer’s wedding planner comes across as more pitiful than haughty.

Her sniping remarks after being called safe, however, as well as a breakdown during deliberations, make me think these are Milk’s true colors. She bursts into sobs over not being in the top “I think that’s a lot of emotion for safe,” Trixie says in her confessional and complains that she’s not being “commended” properly for her hard work. She basically throws a temper tantrum because the teacher didn’t give her a gold star.

I didn’t mind Milk in her season, and was even pretty impressed with her post-show modeling gigs. But her casting on All Stars confused me. I wasn’t sure she had more to offer in this arena. After all, being successful off the show does not automatically make you great at Drag Race. But seeing her complain that the judges didn’t properly “congratulate” her is a new low a case of spoiled Milk. What’s more, it’s an off-putting display of her privilege.

Milk is a hot, white man out of drag. That does not make the work she does in drag any less artistically valid. But it does mean we have to keep perspective on why she’s able to do the drag she does. If, for example, Kennedy’s drag was half as outré as Milk’s, she’d be relentlessly blasted by fellow queens and trolls alike. We know this because Kennedy gets hate just for doing her drag as-is, much less something so unconventional. Milk receives the benefit of the doubt in a way someone less classically handsome (or non-white) would certainly not.

Again, just to be clear: This doesn’t discount the value of Milk’s drag. She is one of the most avant-garde thinkers Drag Race has ever seen, up there with Sharon Needles, Raja, and Kim Chi. As she reminded us in the premiere, she has literally inspired Drag Race challenges. But whining that she’s not getting kudos and discounting her fellow queens’ performances while doing so is ignoring the ways in which she benefits from her privilege. She gets to stay in the competition and continue to show her unconventional drag, despite her flawed execution of it.

Because therein lies the rub: “Safe” is honestly a generous placement for Milk. Her Celine is weird and frenetic (and in not-very-Celine ways), and her runway is bland. She probably deserves the bottom three spot over Chi Chi this week. She absolutely deserved to be in the bottom two last week. Rather than throwing a fit, she should be glad she’s still in this race because if she continues performing as she has, she won’t be around much longer.

Speaking of, the next episode of RuPaul’s Drag Race All Stars will air Thursday, Feb. 8, at 8 p.m. Eastern on VH1.