I don’t want to spend much time in this recap talking about Milk, mostly because I said a lot of what I feel about her in last week’s RuPaul’s Drag Race All Stars season three recap. And in fact, the other queens sum it up well this week: She’s talented, but incredibly deluded when it comes to her All Stars performance.

However, Milk is a disaster in the improv comedy challenge this week a parody of The Bachelor called, appropriately, The Bitchelor ignoring the challenge’s directions to not talk over her partner, thus doing Trixie Mattel a disservice by hogging all their time together. She probably costs Trixie the win this week, a fact Trixie and the other queens know well. And instead of owning her mistakes, she whines that she’s better than the other bottom three queens.

It’s a big miss for Big and Milky, as the whole season has been.

Drag Race is not the right place for Milk’s skills. I’m excited to see what she does next, particularly since she’s been taking a more activist role in her social media presence as of late. But whether it was the editing, her own ego, or a mix of the two, Milk did not come off well this season. It’s a mixed blessing to go home, but a blessing most surely.

So let’s instead talk about the other seven queens, and considering we haven’t done it yet this season, let’s do it as a power ranking. (Since she’s been eliminated, we won’t include Milk; for the record, she’d have been last.) On a scored average of runway category is: wig reveals! and challenge performance, here’s where the remaining seven All Stars stand this week. 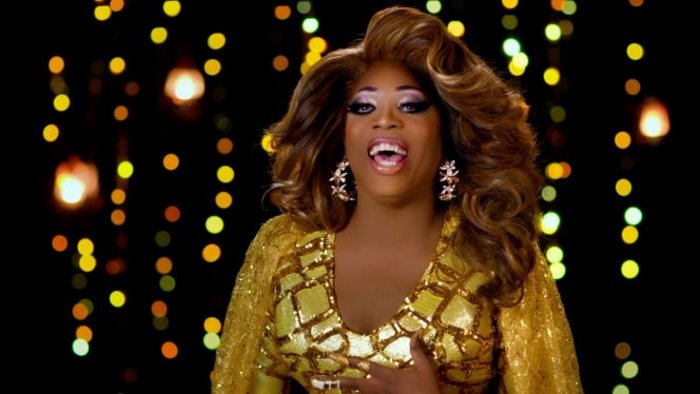 Well, this isn’t going to make the “Bebe is a mole” conspiracy theorists any less suspicious. Bebe is way out of her depth this week. She plays her assigned role for The Bitchelor a virgin with an interesting twist. She’s an African princess, and her virginity is sacred, only to be given to her eventual husband. Unfortunately, that pretty good premise doesn’t go much of anywhere, and she doesn’t have many real jokes. Additionally, her Asian-inspired runway look is just solid in a sea of spectacle. She easily deserved bottom three this week. 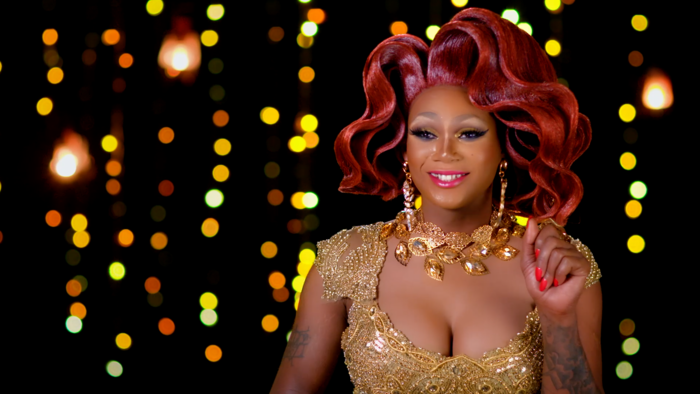 Chi Chi is pretty defeated this week after the judges knock her for what she’s well aware is a bad challenge performance. She didn’t get much of a prompt for her character beyond “is into the Bitchelor” which, yes, all the contestants are and “is polyamorous.” Unfortunately, Shangela gets all the good beats of their duo (admittedly not many good beats), and an ambitious, sensual runway look isn’t enough to keep her out of the bottom. I hope her spirits pick up soon; she was my favorite pre-season, and I hate to see her spirit broken. 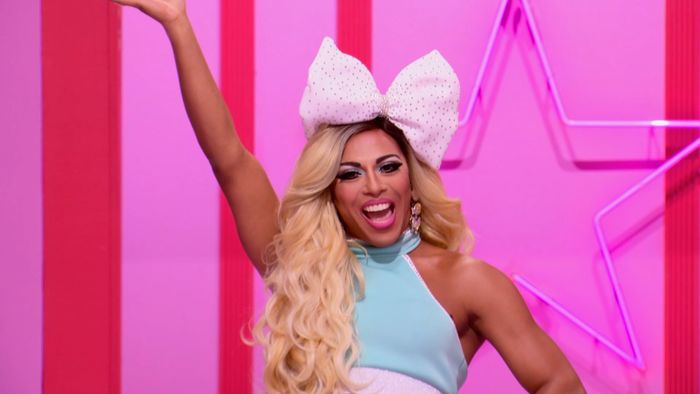 This is about as safe as safe performances get. Her corn runway, complete with popcorn wig reveal, is fun, and her jokes as an uptight, bisexual dom in The Bitchelor mostly land. But coming off her Mariah Carey, it’s something of a letdown. My instinct is Shangela wanted to keep a relatively low profile this week, but we’ll see. 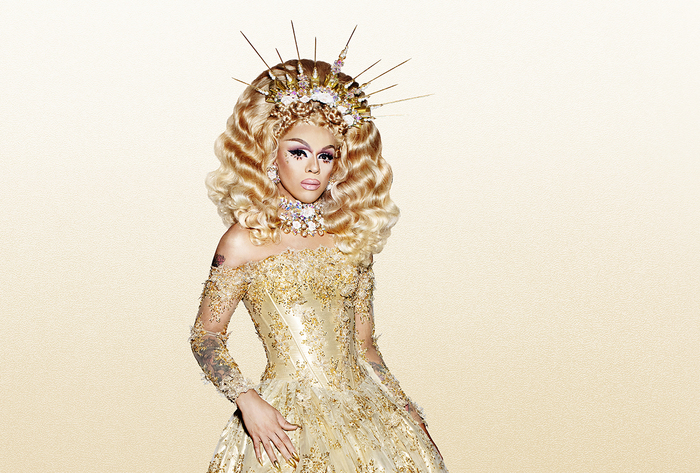 It is such a bummer that Aja’s Needy Girl misses the mark for the judges. Quite frankly, I’m with her I thought her definition of needy was totally fine. But her performance of even that definition was somewhat lacking. On the other hand, her runway was astonishing, the perfect execution of her new, “kawaii” (as she calls it) aesthetic. Not only did she have a wig underneath a wig headpiece, she had another wig on underneath! There were a couple of triple wig reveals on the runway, but none as strong as this.

I also have to give Aja props for basically acting like there was no way she was going home during deliberations. Because really, there wasn’t. She knew she was fine. And good for her! No need to break a sweat over nothing. 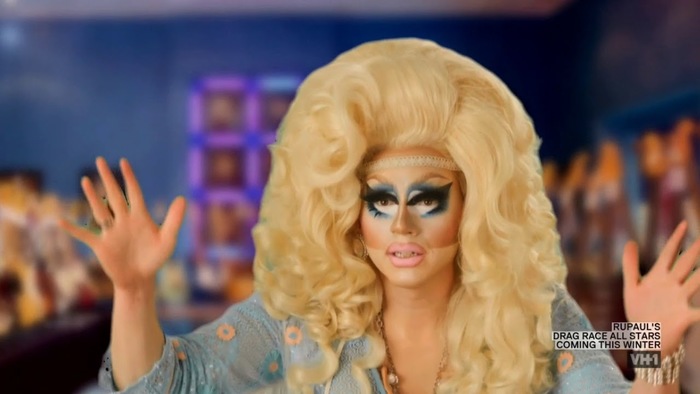 What’s going on here? Yeah, Trixie kinda got fucked up by Milk this week, and still managed a solid third-place spot (both on the show and in our ranking) by playing the Fake Bitch with aplomb. (I wish her voice was a little separate from her typical Trixie voice, but her gags with her cell phone are still good.) Her runway is a psychedelic dream, and easily the best thing she’s worn on Drag Race.

And yet so far, what seemed during pre-season to be a Trixie coronation season is proving to be anything but. She’s the queen of safe, and this week, she can’t even win an improv comedy challenge her specialty! Trixie has until Snatch Game to get it together because if she can’t win that one, she’s got no hope at the crown. 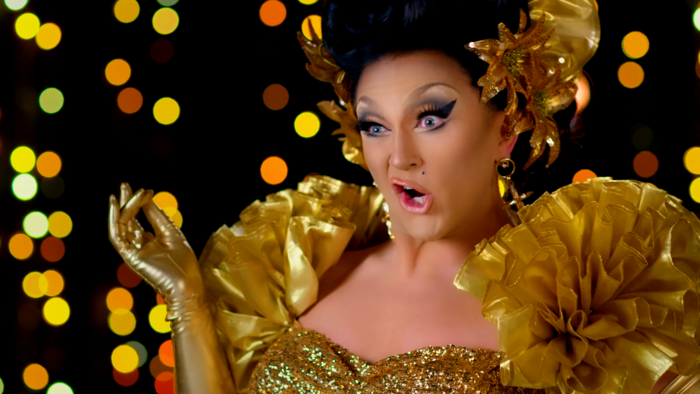 Increasingly, I wish RuPaul would’ve held off and given Ben’s win from the first week to Shangela or Kennedy instead. That variety show win was somewhat dubious; her dynamo Julie Andrews last week and incredible cougar character this week (who enters The Bitchelor crotch-first) are clear home runs. But it’s tempting to get frustrated with Ben’s win in this challenge because it feels like she can do no wrong in Ru’s eyes.

Frankly, though, Ben’s not really doing anything wrong. She’s operating on a completely different level than she was in season six of the flagship show. Her fidelity to her character this week is unreal she actually chews a banana, spits it out, then eats it again. And then makes a joke about it that lands perfectly!

Does it matter that she lost the lip sync this week? Not really. She’s won every challenge of the season. She’s set for as long as she can keep this up. 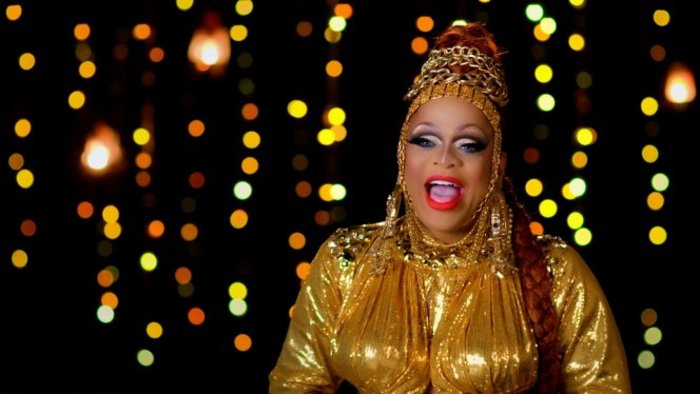 Flawless victory. This was incredible work from Kennedy, both on the runway which, I agree with Michelle Visage, was pure Davenport in all its pageant glory and in the main challenge. Kennedy is one of a handful of pageant queens to really show their comedy chops on Drag Race, alongside girls like Alyssa Edwards and Trinity Taylor. Her character, a hard-living party girl with bad teeth and a big ass, is a gonzo characterization like Alyssa is able to create, but pairs that with sharp timing like Trinity’s. She commits to every stunt and fall completely.

Ross Mathews questions why he doesn’t think of Kennedy as a comedy queen, considering she won Snatch Game in her season (with a top-10 all-time performance as Little Richard). I admit, I forget how funny she is too. Part of the issue is that Kennedy takes drag very seriously; her negative reaction to both Thorgy Thor’s crude mirror message to Shangela and Milk’s defense of said message is an extension of that seriousness. Drag is not just a hobby or an artistic interest for her. Drag is Kennedy’s life and work. But that severity of purpose, in a weird way, makes her a great comedy queen. She conceptualizes a character, delivers it full-force, and shocks the hell out of everyone. Hers is a deserved win and makes this episode a great showcase for one of Drag Race’s most underrated queens.

A few short thoughts, plus a longer coda:

Finally, a note on the last episode: There’s been discussion online (and even obliquely during this week’s opening) about whether Drag Race favored certain contestants in the VH1 Divas Live challenge. My answer to that: Of course it did. You could take one look at the parts divided up (as Thorgy did) and notice how tilted the challenge was. Shangela got a comedy routine as Mariah Carey (which she executed perfectly), while Thorgy got a tricky character and not many jokes as Stevie Nicks. The same thing happened with Alyssa Edwards’ Annie Oakley and Katya’s Princess Diana, respectively, in All Stars season two’s Herstory of the World Challenge.

I’m less interested in calling out obvious manipulations and more interested in how contestants fight back against these limitations. Reality competitions are never a 100% even playing field; the best contestants know how to play against disadvantages to create their own success. Violet Chachki saw a villain edit coming in season seven, and challenges that favored her rival, Ginger Minj. But she figured out a way to beat both the edit and Ginger, and she won the crown.

So I empathize with Thorgy, who knew the bus was coming her way, but she got too far in her own head to beat the odds. Drag Race isn’t just a reality show; it’s a mind game that consistently rewards the cleverest queens who aren’t just great at drag, but understand the inner machinations of the show itself.

For that reason, even though Ben is the strongest competitor so far, I’m still betting on Shangela or Trixie to take the crown home this time. In both their performances and their commentary, they demonstrate that they truly get Drag Race. That’s more important than all the challenge wins in the world.

The next episode of RuPaul’s Drag Race All Stars will air Thursday, Feb. 15, at 8 p.m. Eastern on VH1.