Pop art takes over the RuPaul’s Drag Race All Stars season three workroom this week, as RuPaul and her top six All Stars pay tribute to Andy Warhol in a Ball challenge. The queens create two looks: a soup can (in tribute to Warhol’s Campbell’s Soup Cans) that shows off their brand, and a Studio 54-inspired disco look. But while a couple of the girls channel their inner ARTPOP, others simply turn into art flops.

I may never stop laughing about this. What a spectacular head fake from Shangela. Trixie saw her whole life flash before her eyes. #DragRace pic.twitter.com/ExpovzKjV5

Trixie Mattel, who briefly saw the eyes of God as Shangela faked her out during last week’s elimination, heads into this week confident, but not cocky. She loves design and branding, and so the Warhol Ball seems right up her alley. Indeed, as soon as her “Pep/Abysmal” soup can hits the runway, it’s clear she’s won the challenge. Her voiceover paired with the can is reminiscent of her creative partner Katya’s best All Stars work: “Just like my soup, I’m inspired by rainbows, little birdies, and the reemerging dark recesses of a rocky childhood.”

Even more impressive, though, is the Disco Barbie look she puts together. Her neon pink jumpsuit perfectly fits both the challenge brief and her frame. It’s maybe the best Trixie has ever looked and it’s a look she put together on the spot! I’d never have guessed comedy queen Trixie would bomb Snatch Game and win a design challenge, but props to her for beating the odds and coming out on top. 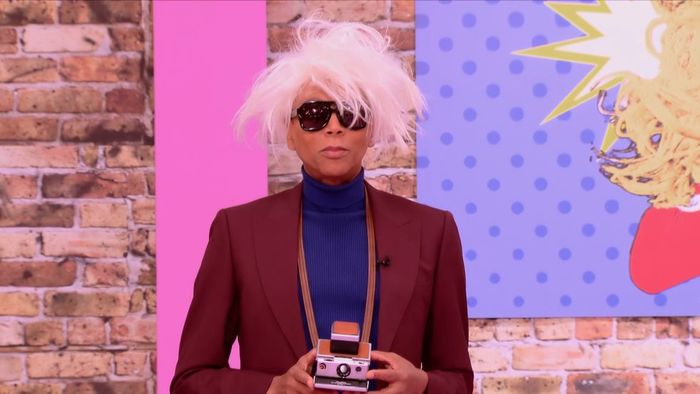 Joining her in the top two is secret 10th queen Bebe Zahara Benet, who also takes her first win. There’s a splash of drama during critiques, as Ru asks Bebe if she made the outfit herself, to which Bebe responds affirmatively. However, we see during the workroom segment that Aja heavily assisted Bebe with sewing. Aja visibly reacts negatively when Bebe doesn’t credit her, and understandably so. Quite frankly, the design a fringe-heavy affair perfectly paired with big hair and a face beat for the gods likely would’ve given Bebe the win even if she were honest about Aja’s help. As a result, our original queen just looks ungenerous.

That wasn’t the end of the Aja drama, though. Despite a beautifully constructed runway look, Aja gets knocked for the period-inappropriateness of it, and she really fumbles her explanation. First, she doesn’t know how to pronounce her design inspiration France Joli, saying it “Frances Jolie” instead. Then, she incorrectly cites Brigitte Bardot as a ‘70s inspiration, which Ru corrects her as being more ‘60s.

“You’re 23 years old, right?” Ru asks Aja. “Obviously, you weren’t here for a lot of history of humans on this planet. But we’re queens. It’s important to know pop culture and things like that. I just expect queens to do a bit more research.”

That’s a tough lecture to receive. Aja’s been doing remarkably well in this competition considering how poorly she fared in season nine. But here, Ru knocks her not for just a simple error or slip-up. She’s saying Aja hasn’t prepared when it comes to her history, and that’s something that takes more time to fix. It’s a tough break for the comeback kid, but Ru’s criticism is very fair. 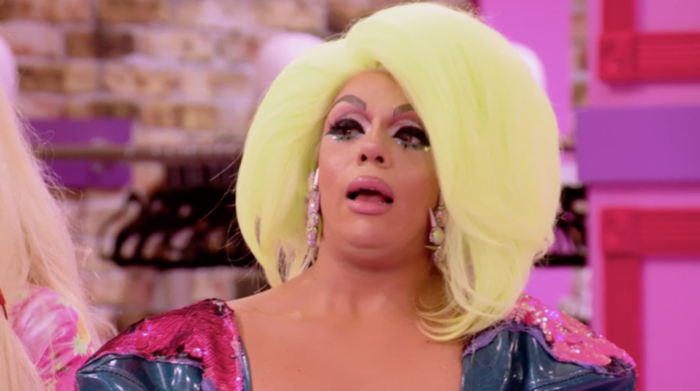 Shock of all shocks, BenDeLaCreme doesn’t win this week! She’s merely safe for her genius can and too-pedestrian disco look, and quite frankly, she looks over it on the runway. Both the judges during critiques and fellow queen Kennedy Davenport during deliberations note how tired Ben seems. Her response to this is an odd mix of whiny and resigned. I’m not sure where this Ben edit is headed, to tell you the truth. She seems to be put out by what All Stars expects of her performing well every week, sending girls home and yet she still wants to win. I’d not be stunned if she doesn’t make it to the finale. That’d be a shame, considering how extraordinarily she’s performed this season, but something smells fishy.

I don’t have much to say about either Kennedy or Shangela this week, largely because their efforts are mostly middle of the road. Shangela’s Halleloops soup can is perfect, and Kennedy’s disco diva look is flawless. But Kennedy’s soup can is more of a character-based item than the judges would like, and Shangela’s disco diva look is a mess of gold tinsel strips and fake records. The latter is more offensive (though not the worst look ever seen on Drag Race, as Trixie hyperbolically calls it), which puts Shangela in the bottom for the first time this season. But to be honest, it never feels like she’s in real danger of going home. She just saved Trixie last week, who would look like a real heel if she chopped Shangela the very next challenge. Bebe, on the other hand, adores Shangela. In some universe, she may have sent Shangie home, but not this one.

The lip sync is set to Diana Ross’ “The Boss,” and in telling you that, I’ve already told you who won. Trixie puts up a good fight, but Bebe just is Diana Ross. She’s got the dress, she’s got the hair, she’s got the perfect facial expressions and movements. It’s like when Ru gave Latrice Royale an Aretha Franklin song: Sometimes, one queen is just set up to slay.

During deliberations, Aja notes that Bebe isn’t letting her get a word in edgewise, and I don’t think that was a mistake. Like I said, Bebe wasn’t going to send Shangela home. Better to give Aja a monologue about how much she’s grown than let her argument to stay fall on deaf ears. So the season nine queen sashays away. She’s got nothing to be ashamed of, though she’s grown exponentially in an incredibly short period of time. With a little more experience, she’ll be known as one of the modern drag greats. I’m absolutely sure of that.

Next week’s episode promises the payoff of the Handmaid’s Tale-themed twist of the season. Who returns, if anyone? Who goes home? We’ll find out when RuPaul’s Drag Race All Stars returns next Thursday, Feb. 22, at 8 p.m. Eastern on VH1.