Who won each showdown? Let’s quickly run them down.

ROUND 1: Thorgy Thor vs. Shangela (vs. Trixie Mattel)

This is the conflict with the most tension in it, largely because Thorgy and Shangela are very different types of communicators, and kept cutting each other off. It also involves a very reticent Trixie, who is still paying for hanging up Thorgy’s note about Shangela in her workspace. Trixie mostly wants it to stop, while Thorgy wants to clear the air, and Shangela wants to defend herself and her decision to send Thorgy home. It’s ultimately just a lot of noise.

Winner: Shangela, though I was tempted to say no one. But Thorgy agrees that her problem was being in the bottom two, not being sent home, and Shangela didn’t put her there.

ROUND 2: Morgan McMichaels vs. BenDeLaCreme

Morgan’s beef with Ben comes down to one thing: She feels Ben was a hypocrite in talking about eliminating the weakest competitor, but then sending her home over Chi Chi. While Ben momentarily tries to argue that Morgan was worse than Chi Chi during the first episode’s variety show, Morgan quickly shoots that down, and goes on the offensive. The result is a very righteous Morgan and a very rattled Ben.

Winner: Morgan, thanks to a perfect mixture of aggression and clarity. Though she apologizes for said aggression later, I honestly thought she was perfectly in the right. Ben was hypocritical in eliminating Morgan, and the reason it affected her so much was because deep down, I’m sure she knows she did contradict herself.

ROUND 3: Aja vs. Bebe Zahara Benet

Though she didn’t remember this confrontation in our chat, Aja did have the chance to call Bebe out for not crediting her help with Bebe’s Warhol Ball look. Bebe tries to roll her eyes at this problem, and insists in her confessional that credit wouldn’t have affected anything. But Aja plants her heels and stands firm.

Winner: Aja, easily. This was such an easy problem for Bebe to fix, and her unwillingness to see Aja’s side is a bad look on her. She’s lucky Aja didn’t come for her harder.

ROUND 4: Kennedy Davenport vs. Milk

This is maybe the most personal of the conflicts. Kennedy seems furious with Milk for discrediting her drag, and Milk’s insistence on knowing why Kennedy sent her home only opens old wounds. It’s an especially bad look when Kennedy explains her decision-making, but Milk seemingly doesn’t listen and instead insists Kennedy only sent Milk home to save Chi Chi.

Winner: Kennedy, but it’s not the cleanest win. She seems somewhat insensitive to Milk as there are tears streaming down her face though considering how much the model queen has cried this season, I might be skeptical, too. Ultimately, Kennedy looks pissed, if rightfully so, while Milk just seems oblivious.

After a sustained bit of arguing seriously, the confrontations go on for 10 minutes the queens finally break off into their subgroups for the challenge. The task is a modified version of the season-ending rap challenge from the last two seasons: Queens must write their own verses to a song, then perform them as a supergroup. The top five form one team, performing the Spice Girls parody “Drag Up Your Life,” while the eliminated girls perform the Drag Race reference-heavy “Sitting on a Secret.”

Much ado is made about Ben’s dour attitude during recording with guest judge Adam Lambert. She seems really shaken by what’s happened with Morgan, and questions whether this kind of drama is good for her at all.

“Am I compromising my personal ideals about not wanting to be part of unnecessary conflict?” she asks while preparing for the runway. “[That’s] kinda been gnawing at me since even before I got here. Competition itself is not something I got into this game to be a part of. I’m competitive with myself.”

All Stars is a war. I’ve said previously that Ben seems good at Drag Race (and at drag as a whole), but doesn’t flourish in this format. It’s too toxic for her; what someone like Shangela thrives on only makes Ben uncomfortable. She may be a great drag queen, but she’s not really a drag soldier. This war isn’t good for her, and it’s been tough to watch her get so beaten up by it even as she’s won a record number of challenges. 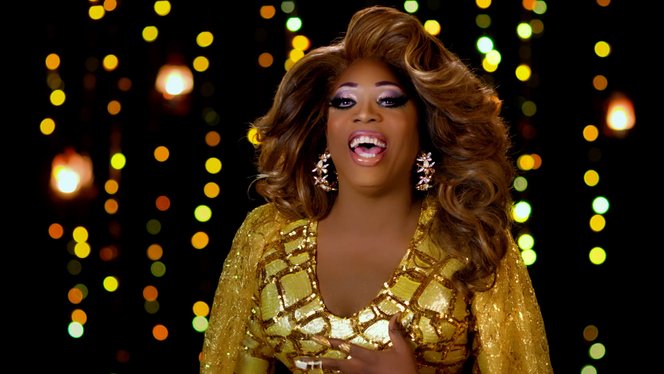 Speaking of, the top five are the winning team, and Ben wins top honors alongside Bebe. They’re both great choices, though I suspect Trixie and Shangela fans will be annoyed, considering they both slay as well. But Bebe brings a bizarre energy that is attractive to the judges, while Ben wins on camping up her goth, Wednesday Addams-esque character. Had Bebe not performed well on stage, or had Ben’s attitude not improved after a come-to-Jesus talk with Morgan, one could easily have imagined Trixie and Shangela winning instead. The only one who doesn’t perform at the top of her potential is Kennedy, and even she’s not bad. She’s just the worst of the five.

Winning is a mixed blessing for the top two, though. Unfortunately, because of the challenge’s rather convoluted rules, they still have to bring back one of the eliminated queens, and they still have to send home one of their teammates. It’s an odd setup, considering it means a member of the losing team is getting a reward, while a member of the winning team is being sent home. It does a number on Bebe and especially Ben, too, because they’re having trouble fathoming exactly what to do.

The lip sync is a fantastic one, all theatrics and belting to Deborah Cox’s “Nobody’s Supposed to Be Here.” Even before the lip sync, you can see that Ben has a trick up her sleeve: “I have made my choices. I feel strong in my conviction about these choices. I have to win this lip sync.” Sure enough, she does win, and the smile that flashes across her face is unlike anything we’ve seen from her before. This is a woman with a plan, and her spooky makeup only ups the dramatic ante.

Ben chooses Morgan to return to the competition, completing the full circle of their arc. Now, the first-eliminated queen has another chance to show her stuff, while Ben gets to fix a choice deemed hypocritical and inconsistent. Frankly, it’s hard to imagine Ben’s arc getting any better than this.

But imagine we’ll have to, because in a gag-worthy shocker, Ben chooses to eliminate herself. She was right: She’s competitive with herself, and no one else. Quite frankly, after winning five challenges, no one was going to beat her in All Stars season three. So instead of making them try, Ben does perhaps the most charitable thing possible, and eliminates herself. It’s a gag, and by choosing to go out on her own terms, Ben has made a mark unlike anything we’ve ever seen on RuPaul’s Drag Race. The war is over for her. She has signed her treaty and found peace within herself. She exits without a crown, but with all the satisfaction she could want.

RuPaul’s Drag Race All Stars returns for its penultimate episode next Thursday, March 8, at 8 p.m. Eastern on VH1.