Since season 7, when there were so many acting challenges the queens themselves started complaining, it seems RuPaul’s Drag Race likes to disguise some of the performance tasks as something else. This week, the season 10 queens are charged with writing and executing ads for fake dating apps, which does add a bit more texture than just reading pre-written lines. But what’s the final result? Queens standing in front of the Drag Race green screen, acting. It’s an acting challenge by any other name.

That’s not a bad thing more a wish that Drag Race would stop hiding its love of the theatrical arts and wear it on its sleeve. RuPaul clearly wants her queens to be able to act on some level, and it’s a fair ask. More than any other challenge, I’d say acting tasks weed out those who are totally incapable of winning the crown.

Sadly for her, that means Yuhua Hamasaki never stood a chance. She’s a fun and quirky queen when she’s just being herself, but the New York seamstress can’t translate that to her performance in her group’s ad for the ugly-queen, hot-body app Madam Buttrface. Her line deliveries are flat, and her inability to make over her face in a convincingly ugly way really irritates both judges and her team members.

The biggest issue, though, is Yuhua’s tendency to talk back to the judges. Her banter is always aggressive and excuse-heavy, and it clearly drives Michelle Visage in particular mad. Though no one wants to go out third on Drag Race, it’s probably for the best that Yuhua gets out now. There was nowhere for her edit to go but down. 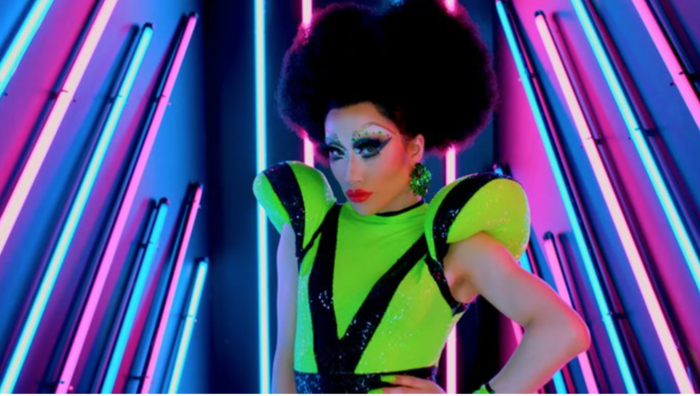 Speaking of The Vixen: The drama from last week resurfaces, as Aquaria makes a snide comment about The Vixen using Monique Heart’s hair for her Best Drag look. The comment would be more valid if either the hair was the purpose of The Vixen’s fire-inspired outfit, which it clearly wasn’t, or everyone else’s Best Drag had been good. (It was not.) As a result, the nitpick just serves to anger The Vixen, and she claps back hard. At one point, Aquaria calls her negative, which earns a “What did you just call me?” in response. Aquaria practically breaks her neck emphasizing that she said “negative.”

The thing is, The Vixen knows what Aquaria called her. She knows how this game is played. She’s incredibly savvy when it comes to racial optics, and is successfully baiting Aquaria again and again. Haters will call The Vixen thirsty for air time, but all I see is a queen who knows how to make herself the story. She warned everyone that she was just here to fight, after all.

If you’ll permit a bit of meta conversation for a minute: For seasons now, the RuPaul’s Drag Race fan community on Reddit has successfully sussed out much of the elimination order ahead of the season through tracking looks revealed in trailers and promos. During All Stars 2, however, this went to a whole new level, when winner Alaska’s ex leaked most of the season’s cast and progress in a now-deleted Instagram post months before the season aired. Thanks to an infamous Redditor named naivesmalls (who became so renowned, no less than Bebe Zahara Benet made jokes about them), the elimination orders for both season 9 and All Stars 3 hit Reddit as well.

This season, there are multiple Redditors claiming to know much of the elimination order, as documented on the show’s new spoilers subreddit. But among the many theories for this week’s episode, there was one constant: Dusty Ray Bottoms goes home. You’ll notice I didn’t even mention Dusty in my recap; save an emotional moment with Blair about their conservative, God-fearing families, she’s barely in the episode. She’s solid in the challenge, and gets called safe. Dusty not only doesn’t go home, she’s not even close to going home.

I like spoilers, to be honest; I think the process of getting somewhere is more interesting than the result, and I think a shock twist protected by spoiler warnings can sometimes cheaply cover a movie or TV show’s otherwise-deficient quality. But the spoiler culture around Drag Race is almost insufferable (lawsuit-worthy, even), with countless Redditors claiming to know the tea when they know nothing at all.

When the spoilers were organic leaks, or just fans doing detective work to suss out who’s safe for how long thanks to what they wore in a trailer, it was fun. Now, the whole thing feels desperate, with fake leakers writing fanfic to earn their 15 seconds of fame on the subreddit. I’m hopeful this week’s bad leaks help stem the tide. Drag Race can be fun spoiled, but only when the tea-spillers actually know what they’re talking about.